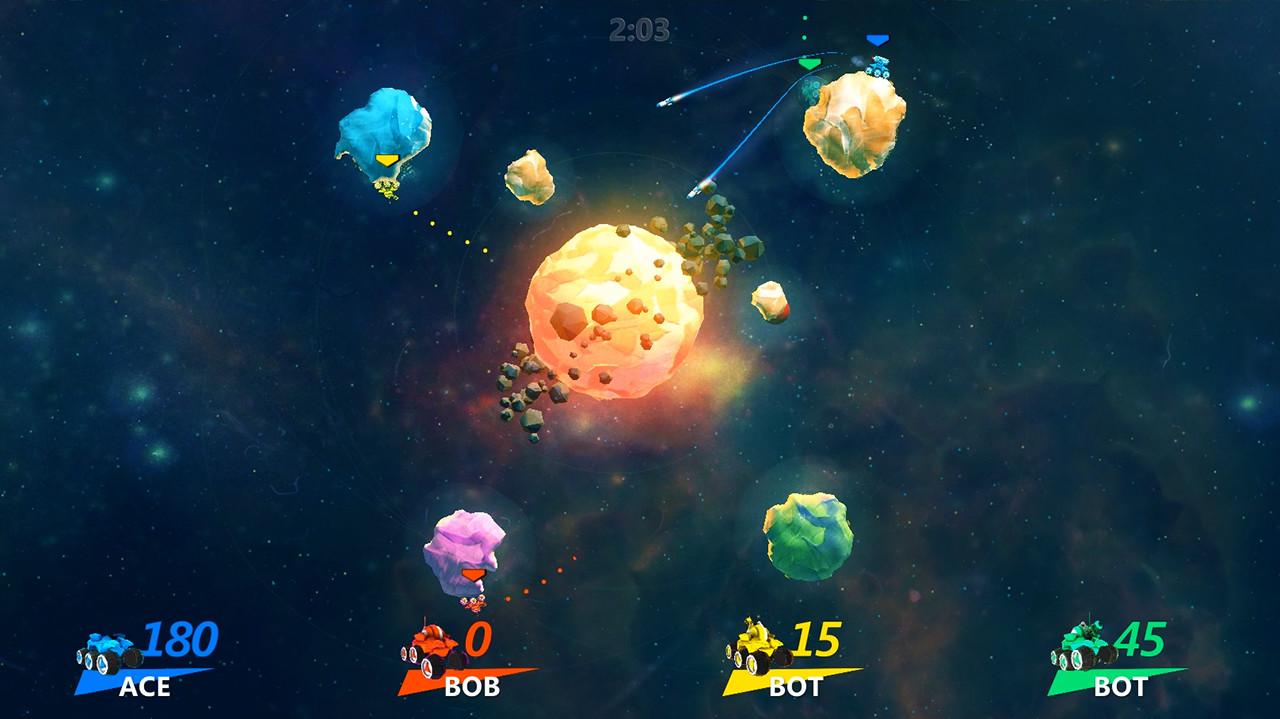 With multiple modes and an addicting competitive gameplay, Moonshot is an addicting physics-based game that is still a little rough around the edges, but provides plenty of promise.

Usually that question generates crickets. Most gamers think of the popular Worms series when they are talking about a physics-based game of this nature. Now, Moonshot does a lot of things very differently than both of those titles. For once, this is much more of an action game. Like Scorched Earth, you have different kinds of weapons and you have to take shots at your opponents that will arc and weave based on a variety of physics-based factors.

At the heart of each level are floating moons that rotate in and around one another, setting up a moving base as well as moving targets. The end result is an often unpredictable firefight. Now in games like Scorched Earth, you would take turns shooting at each other. Each of the tanks would take their time adjusting power and angle and then shooting at one another with a variety of different ammunition. Here in Moonshot, things are moving at a much more brisk, real-time pace that does pull back slightly on the strategy and features more trial and error (lots of error in my case). 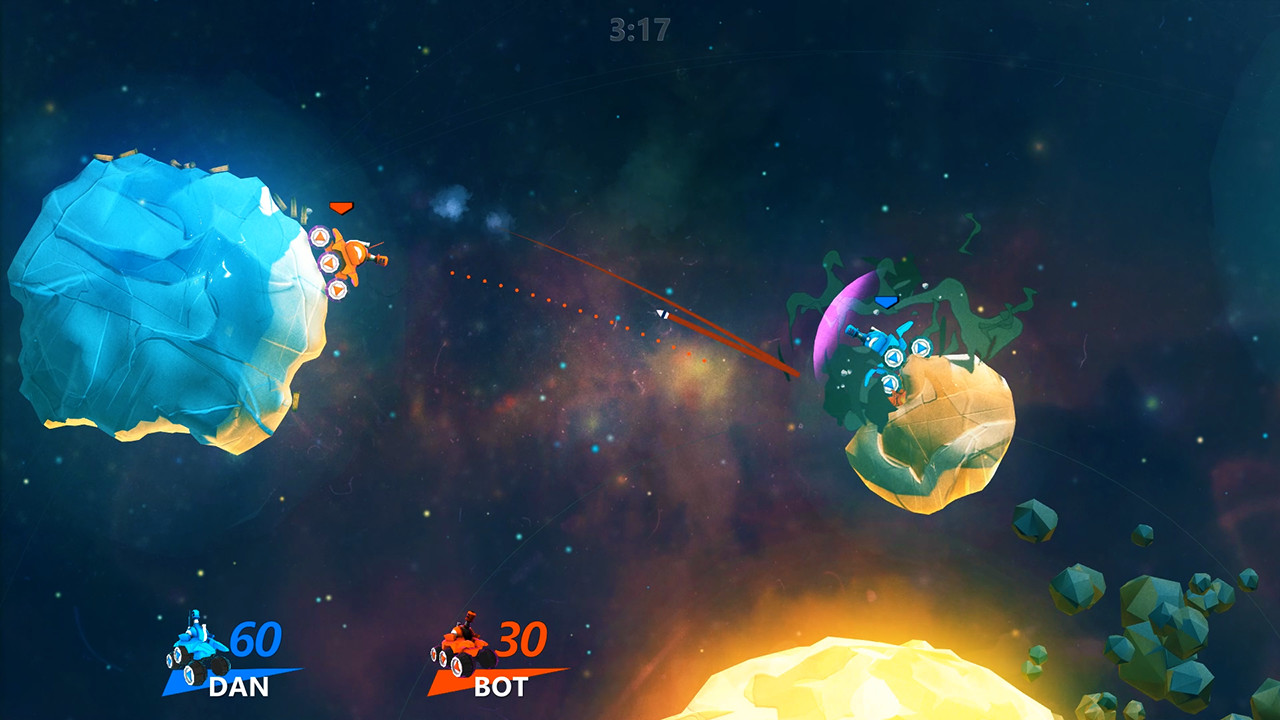 Variety in gameplay comes in a lot of different forms. There are different ways to play your tanks (flying about or hunkering down for example), playing with up to four friends locally (I can’t help but think this would be awesome on a console with a large television and multiple controllers as opposed to packing around the computer screen), a few different modes and plenty of different kinds of weaponry.

The visuals are fun, with a lot of bright colors and fun explosions to compliment the zany music and sound effects. The controller support is something of a must, so I am glad that was included as well. Moonshot’s gameplay is easy to pick up, which is a must for this kind of a game. You want to pick it up and play with buddies, not have to go over a bunch of needlessly complicated directions. That said, even if you are playing against the AI, the computer can put up a pretty good fight. This is helpful in case you want to play and don’t have a handful of friends or family members to play with. However, the AI is not a true substitute for actual players, and this leads into one of the game’s bigger weaknesses to date. Now, this being Early Access, obviously Moonshot is not fully baked yet. I feel as though the core game is in place to be successful, but there are certainly some areas that could use expansion. For one, the multiplayer is only local. Not a death knell, but games like this tend to perform far better if there is some sort of online play and badges or leaderboard to keep players coming back for more. The three modes in place are fun, but there are not a ton of maps or customization options. This applies to the modes themselves and also your tanks.

All in all Moonshot is off to a really solid start. The core game is entertaining and tickled the nostalgia at the back of my mind for Scorched Earth – a game I spent far too much time playing in the library over study hour back in high school. The pace here is certainly more frantic, and it feels built for human competition – which is why the lack of online modes and customization options stand out as the biggest concerns at this point. So far Moonshot has a lot of promise and will be a title I’m keeping an eye on going forward. 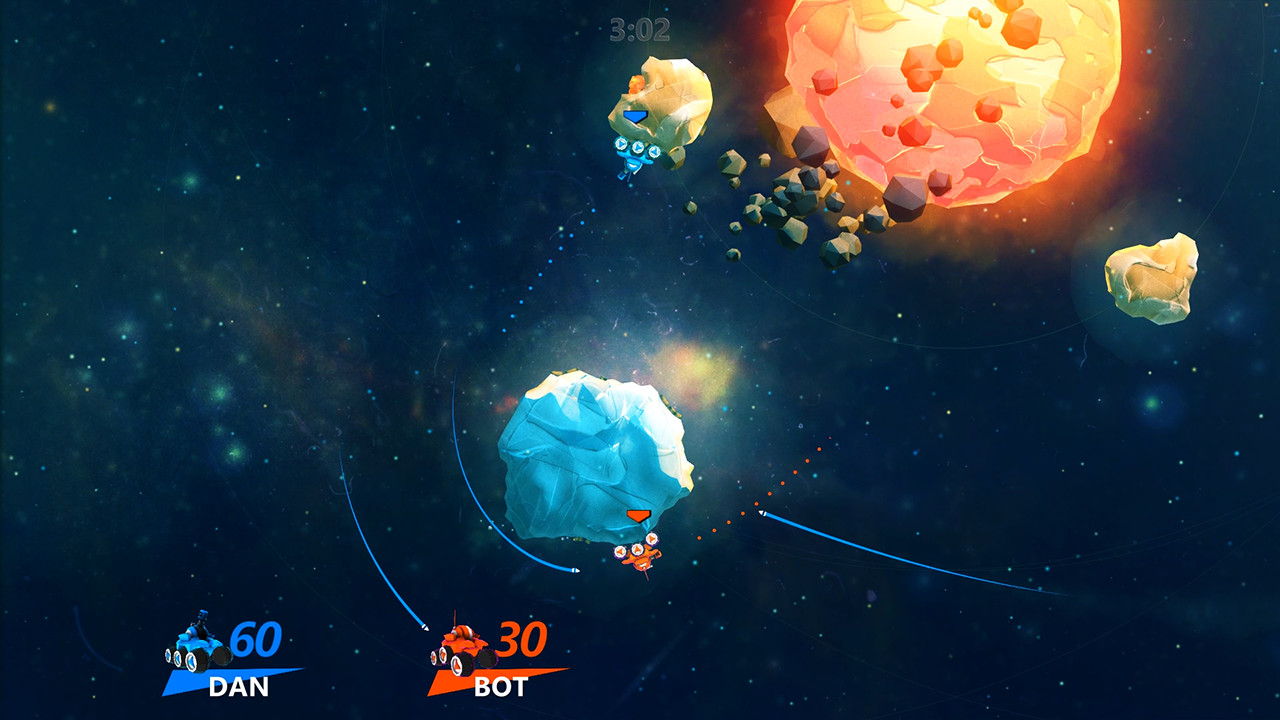