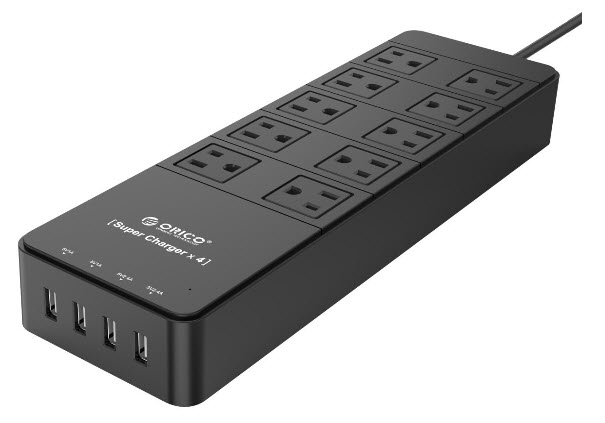 Is the PlayStation plugged in? Check. The Xbox? Check. The Wii U? Check. The handhelds… Check. The PC and all the other stuff that need to go in depending where this is set up? How many powerbars are you honestly up to on your setup? Generally a good powerbar goes between six to eight slots while remaining affordable. More than that and things start to get really expensive fast which is where the Orico comes in.

With 10 ports to plug in handhelds, laptops, or whatever else need plugging in close by, the addition of four USB ports allows for easy plugging in of controllers without having to drag wires from the consoles which can be tricky especially when they are all either across the living room or several feet behind the sitting arrangement. That being said, this has been one of the best power bars that I’ve ever had to use for the variety of things that don’t need to be stationary.

Having now been using it for several months, I can honestly say that this was as good as it promised it would be. At any point in time underneath my gaming room coffee table, I’ve got controllers / phones / or tablets plugged in through the four forward facing USB ports. This still allows for a free ten slots for the 3DS or Vita power adapters as well as a laptop or two when Brie is also downstairs gaming either with me or separately and wants her laptop to watch off to the side or simply look something up. Better yet, it allows for very long gaming sessions with controller batteries not being an issue as there’s no pondering as to where we can plug them all in and if the USB cables can even reach. 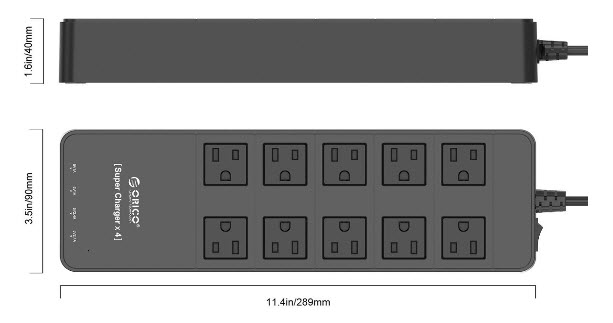 Physically the Orico has a solid build and there should be no fear of it breaking in your hands. Honestly take care not to drop it as it could dent something on its way down all depending. Cased in a hard plastic, all of the plugs are study and will hold in anything plugged in rather well. I’ve seen some powerbars hold on too tightly and honestly break a lead because of it just as I’ve seen some that just by looking at the thing it would stop providing power to the device as that’s how loose it was on the inside. Striking a good balance nothing will easily come loose or simply not come out even with repeated moving of power jacks for different devices.

The Orico Power Bar with ten outlets on top of an extra four USB slots is a great powerbar to have around. This is only made more so if it’s put into an easy to access location which does not require moving anything around in order to plug into. Add in the USB slots for a variety of devices either of your own or your friends that come over and the hunt for a wall plug that is free or an empty USB socket is over.