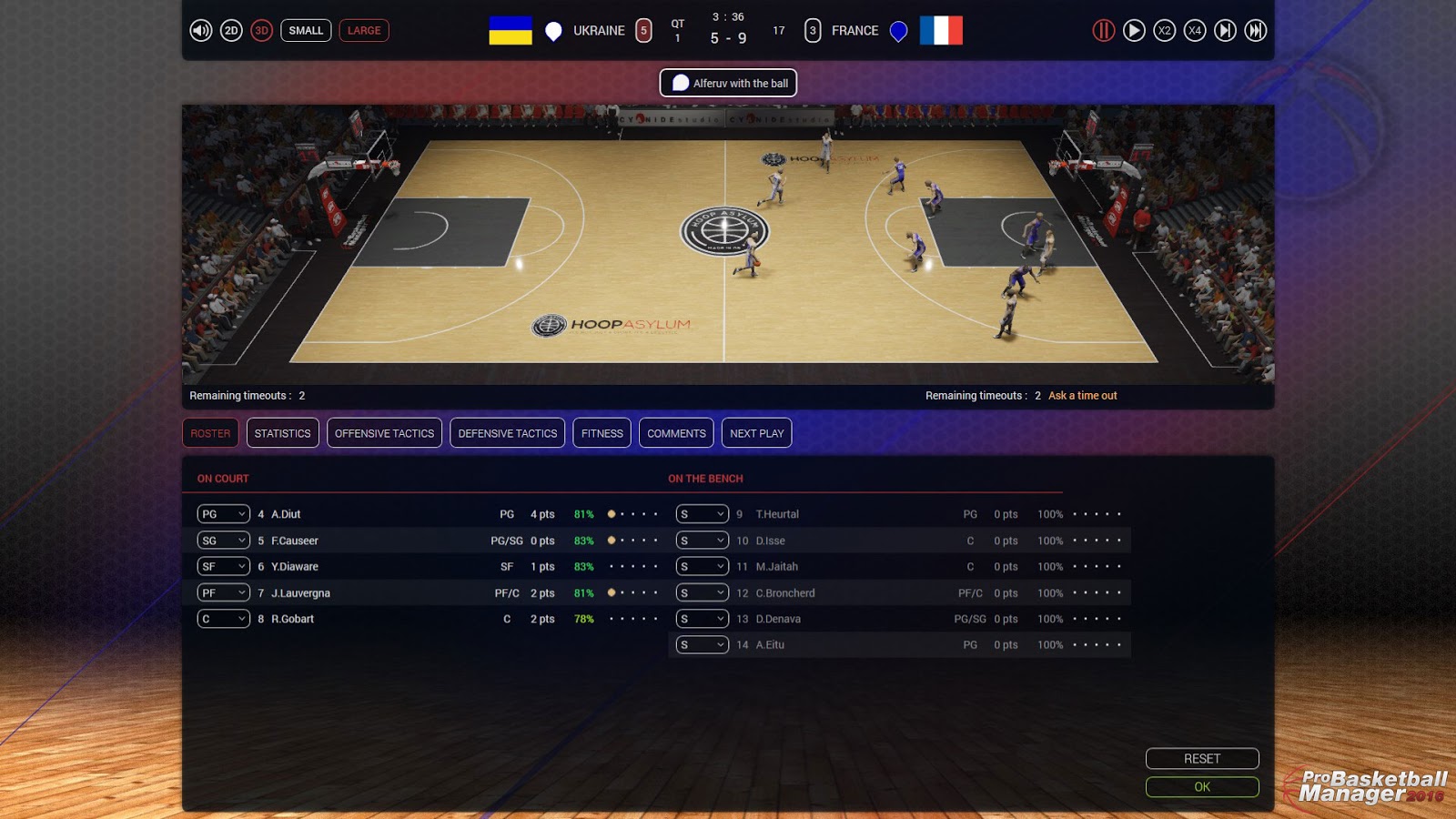 Pro Basketball Manager 2016 will never be confused with a title like the NBA 2k series, nor is it trying to. That being said, I feel compelled to mention that this is a menu heavy where preparation is as key as anything done on the actual court. This is a slower paced version of basketball, and it has quite the learning curve, but it is worth learning if you like simulation sports titles.

The authenticity in Pro Basketball Manager 2016 is huge, with lots of different leagues and over a thousand different teams, there is a lot to choose from right out of the gates. Each of the leagues has its own rules, which I loved. I follow basketball all over the world, but I grew up on and love the NBA first and foremost (but since this is an unlicensed game, we are talking about the North American league). This is where I spent the bulk of my time.

To that end, it does hurt the game’s value proposition some that I cannot just control my Detroit Pistons and help to shape the kind of player Andre Drummond is destined to become, but there is a level of authenticity in the management of luxury tax, scouting players, drafting, training and more. The database manager will no doubt let you fill in the blanks with the customized data and let you recreate authentic leagues and players. Of course, some of the existing players are so obviously aping the real thing that this might not matter. It will take some time to get a database out there that is fully authentic, but the option is there for simulation die-hards. You can help to design your playbook, watching them executed on the court. Of course, this is more about setting your players up in a position to win and not actually controlling them yourself. 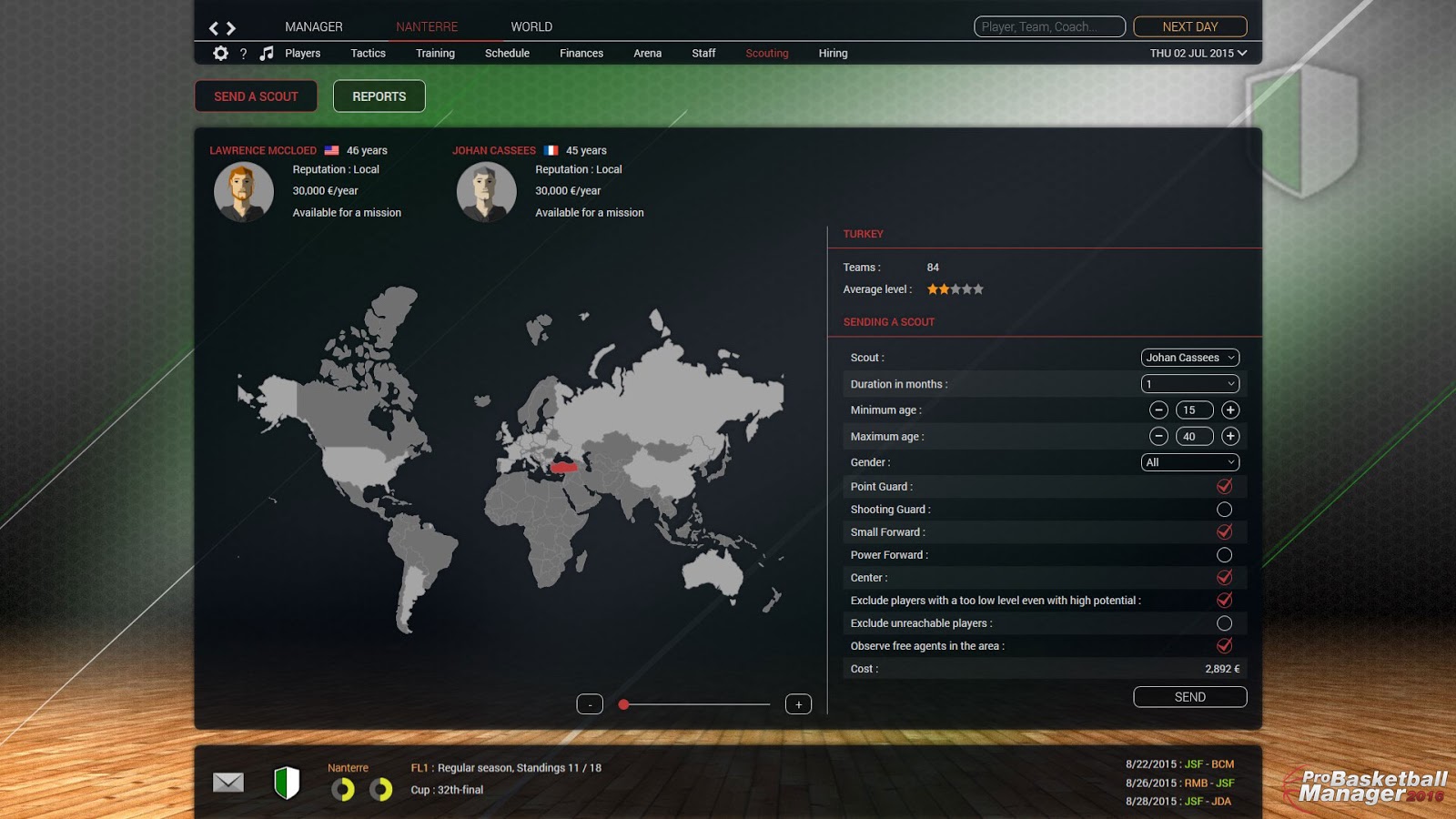 Games essentially boil down into either 2D or 3D representations of players that attempt to execute your gameplan. Most of what you are in control of takes place in menus, and to that end the team deserves credit for coming up with a user interface that is both easy to navigate and simply looks good. It is a lot of text, but this really is one of the cleaner simulation interfaces I have worked with. Graphically Pro Basketball Manager 2016 is not going to blow anyone away, but it is functional and it is not an eyesore, so I’ll take it. On the audio side of the presentation, the music holds up better than the incredibly simple sound effects along the way. The sound track may not hold up to some of the licensed stuff you’ll see in a AAA game like NBA Live, but the upbeat pacing generally suits the game itself.

While the team establishment and management is a big part of how you spend your time – think of it as the framework for your future success or failure, training is also a very big deal. You can focus on the individual players or the team, trying to help them define their identity. Looking to run and gun – you work on getting them as fast and athletic as possible. Looking to create a team of lockdown defenders who patrol the three point line on offense? You can train your players to function that way and then move onto the playbook where you can give them some guided instruction. During the game, you do have some options for manipulating plays on the fly, and really it will be very difficult to win if you do not master this particular practice. Just like in real life, the coach has a lot of impact over the game, even if he is not on the floor actually participating.

All of this depth does come with some sacrifice, however. For one, obviously the pace is going to be slow, which is an odd representation of a game such as basketball. I have played similar games for sports such as soccer, but in that game you might see one or two goals all game long. Basketball just feels faster paced because of the smaller spaces and the high scores where someone is scoring a bucket every 30-45 seconds. To that end, the pace feels odd when juxtaposed against the sport itself. 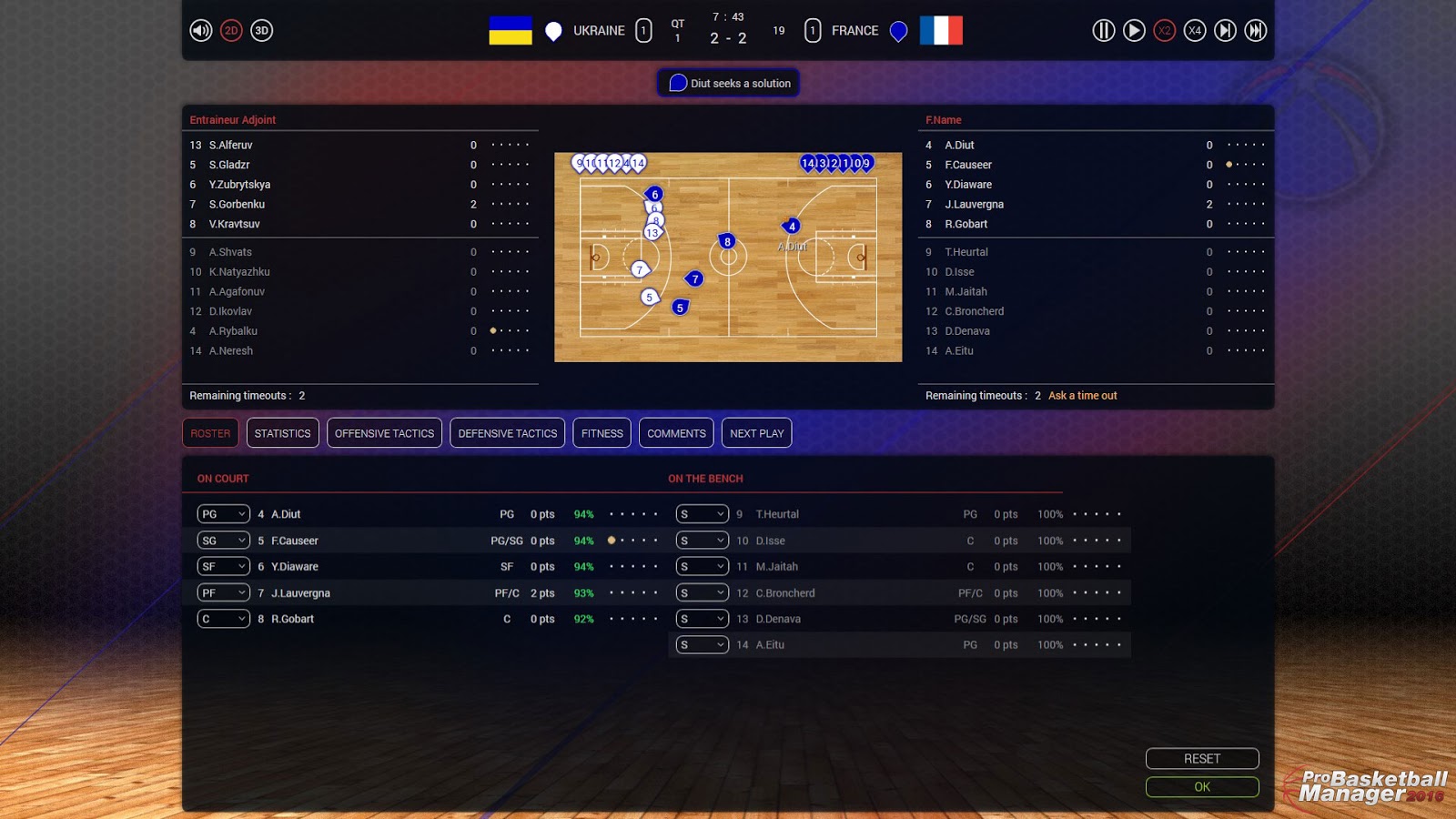 The other issue is that with all of these options and menus, getting into  Pro Basketball Manager 2016 can prove a daunting task. There is an absolute wealth of information to take in, and frankly I had no idea what I was doing to start. There is not a lot of hand holding that takes place, and I found myself scrapping my franchise and restarting a couple of times as a result of this. That time was lost – and I chalk it up to ‘educational’, but the game could do a better job of showing you the ropes early on.

Last but not least, there seem to be some stability issues. It did not crash on startup very often, but it did happen a few times. I could see where perhaps someone mismanaging the database could potentially cause issues as well. I would not say that crashing is prevalent – maybe a half dozen times or so, but it was worth mentioning.

Pro Basketball Manager 2016 is a solid game that is going to appeal to a very narrow niche of players. The simulation elements are interesting and the level of control over all aspects of the world and game are impressive. Basketball fans should also enjoy the game, though your expectations need to be set in advance. You will not be picking up a controller and dunking the ball yourself – you will be lending a guiding hand to your team’s efforts and reaping the rewards of a good gameplan and not quick reflexes. I had fun with the game, but it does have its limitations as well.