comments Share
You are reading
Slice It! – 3DS Review

The game’s name tells us a great deal about what we will be doing: Slick It! This was clearly a mobile game at one point, not unlike other titles that have you swiping your finger across the screen with your phone – or in this case using a stylus with your 3DS. The basic premise works, and it gnawed at the puzzle-solving corner of my mind, encouraging me to just do one more – until I had finished it in just a few lengthy sittings.

The gameplay is incredibly simple. You turn the 3DS onto its side, creating a vertical book-like view with the touch screen on the right. The left screen is for informational purposes. You are told what stage you are on, how many cuts you get to make and how many pieces the shape needs to be sliced into. An additional area of focus is that the shapes all need to be relatively the same size when you are done. That means if you have to cut a square into two pieces, you should try to be as close to 50% in each piece as possible. This earns you more stars, and having too much difference with one or more of the pieces means you fail the stage as well. 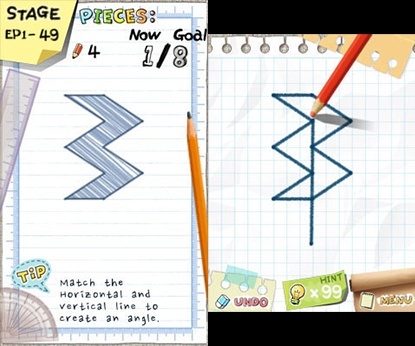 There are two modes. The quick play or challenge mode is simply about getting a mostly completed puzzle. You need to make the last cut. Doing this earns you extra hints that you can use in the primary mode. This mode is a nice quick fix. Slash – next up! Slice – bring on the next puzzle! Cut – here you get a new shape. And so on. It works, and I found myself firing through these really quickly.

I preferred the primary mode that has you going from start to finish. Early on, the puzzles are quite simple. Cut a square into quarters. Create eight slices of pie out of a circle. Shapes can be reused, but the criteria might change. Instead of breaking that triangle into three even pieces using two swipes, you now have to create seven with more cuts. Each swipe has to be used, and again – the pieces need to be of similar real estate (though not shape).

While some of the shapes are pretty straightforward, others were far more creative – such as Christmas trees, or multiple shapes that are joined along a line or a corner – starting you with two of your necessary ten pieces. The line you draw starts outside of an object and has to cut right through to the outside of another boundary. That means if you have two separate pieces to start, a single line can be dragged through both objects. This makes it really easy to create lots of pieces all at once, though negotiating pieces of similar size can prove that much more of a challenge. 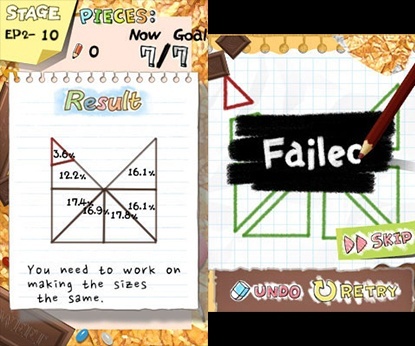 While the main gameplay works, the truth of the matter is – it’s a pretty simple game and there is not a lot to do outside of the core modes. I was able to pound through it in only a handful of sittings, and while it had that addictive sort of ‘how long has it been since I last blinked?’ quality to it. However, that just made the brevity of content that much more noticeable. Additionally, the detection can seem a little flaky at times. When trying to draw intersecting lines, I would sometimes leave the teeniest, tiniest bit of open space near that middle region, and the game would count it as a new shape and mess everything up. The undo option is nice, and there is a hint that can be dropped down (though they come in limited number and can only be refilled via the challenge mode) to assist your progress. Still, I have to think that using a stylus is way more accurate than trying to leverage a fingertip for the drawing of lines.

All in all, Slice It! is a solid little puzzle game that provided solid entertainment for a short period of time. The controls sometimes got in the way as drawing lines should have been somewhat more precise, but in all the concept is a cool one that could have used another mode or some additional levels to extend the life of the game.