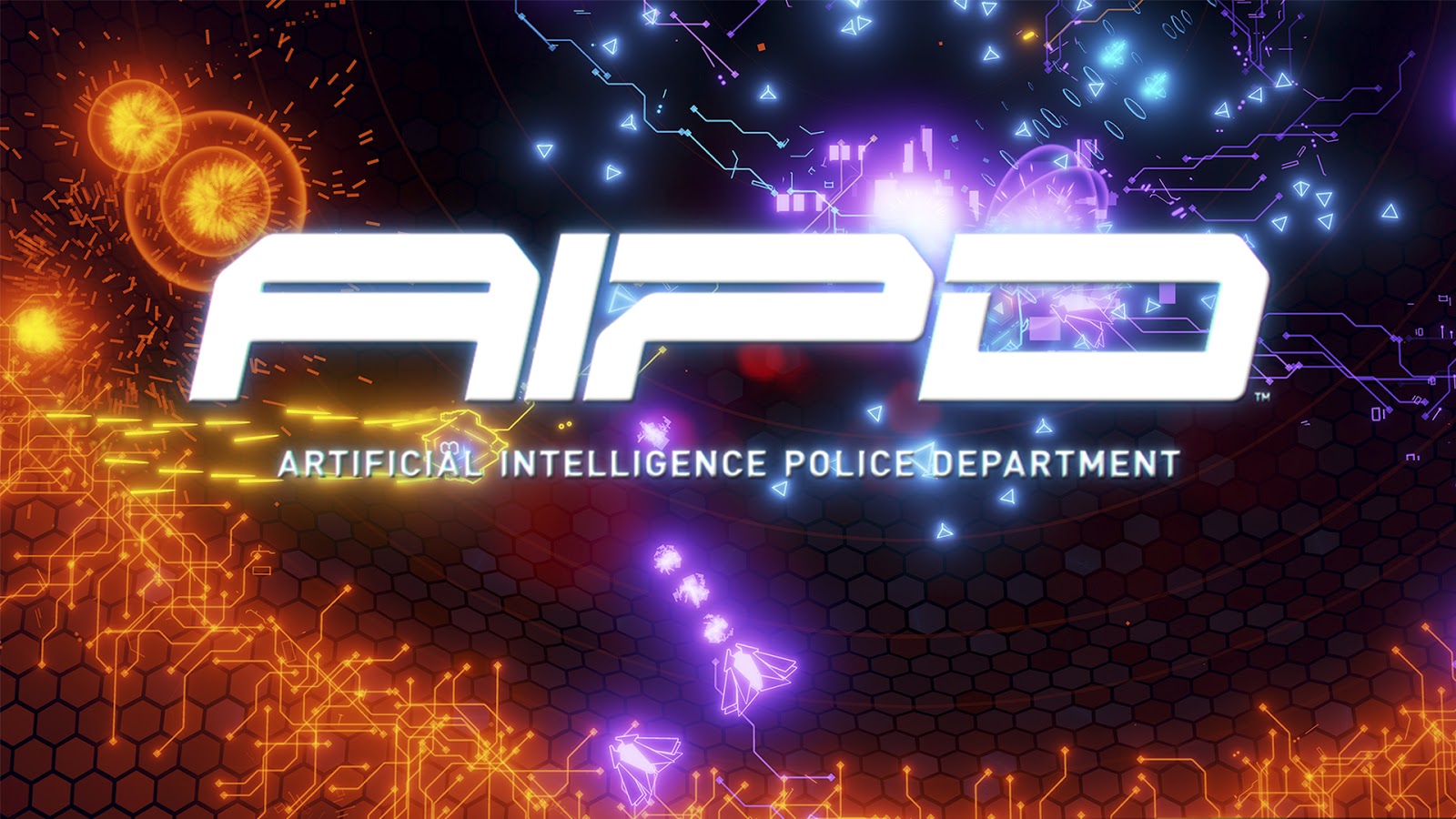 Artificial Intelligence Police Department is a Twin-Stick Shooter from Blazing Badger that puts players into the role of quite literally blasting anything and everything that crosses into their realm of protection. With various upgrades and challenges to be had there’s no shortage to the level of destruction to be wrought onto the invaders.

Not wasting any time in order to get into the swing of things, AIPD starts players right off four difficulty levels depending on how hardcore you think you can be as a member of your Precinct in order to blast rogue AIs from cyberspace. Unfortunately compared to how many modes are visually displayed there are only two actual modes to be had when it is all boiled down to its core concept.

The first, and regular mode, is essentially a classic stage based experience with a twist. Presented to the player after a stage has been cleared, a choice must be made between two selections in order to continue. These choices are really challenges that must be selected in which generally make your officer’s day that much “better”. Better, faster, stronger enemies, ones with shields, others that leave explosives on their departure, and some that are plain mean and leave giant explosives that must be disarmed before they go off or the result really isn’t pleasant. As each one of these is permanently in effect until the famed Game Over screen once chosen, there are more and more things to worry about if survival is indeed in your future. 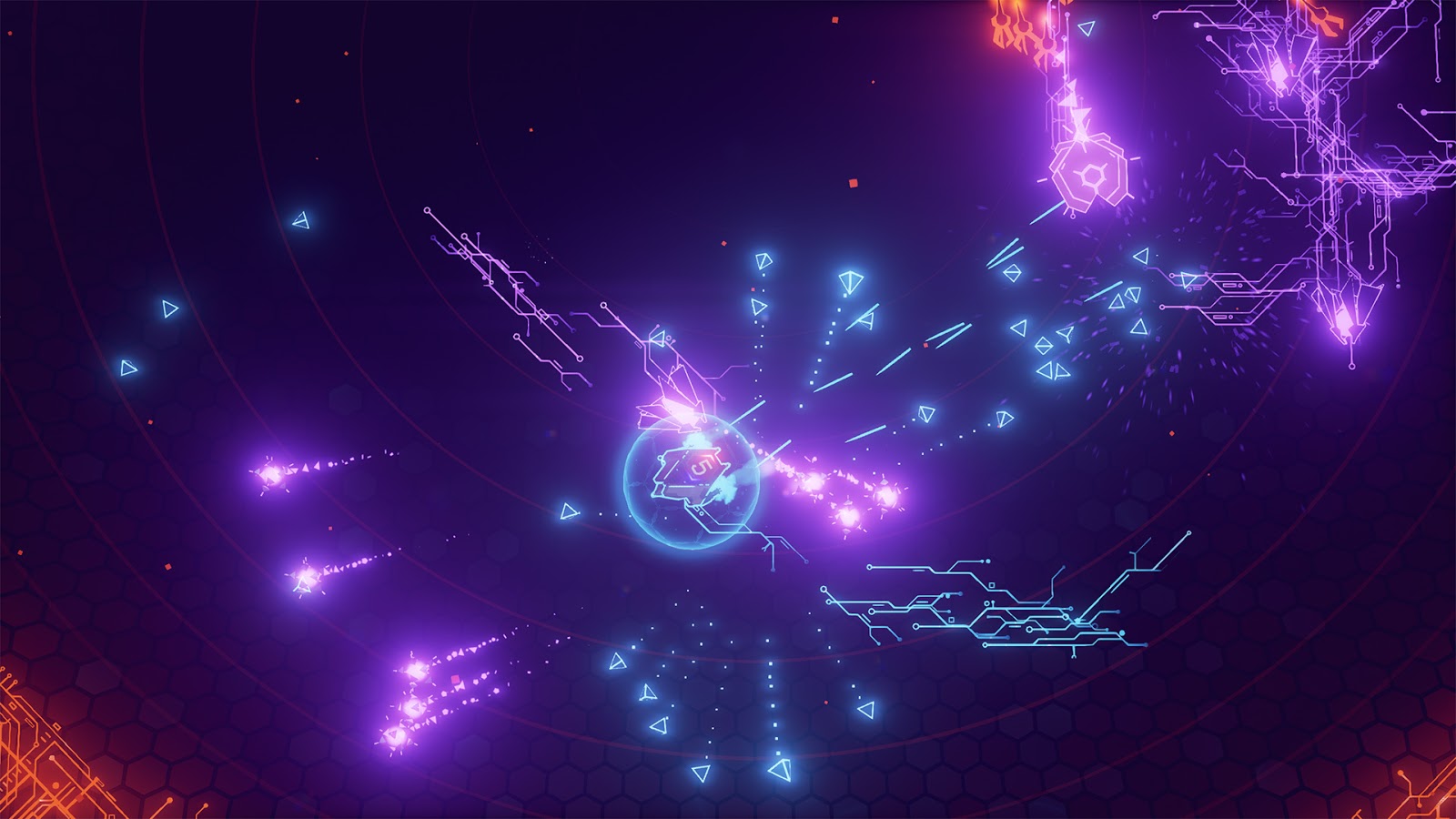 The second mode type is one in which custom versions can be created. Essentially these modes take each of the challenge possibilities and sets them permanently into the gameplay for the duration of your survival. Preset alongside the standard mode for immediate starting are three custom modes from the developers. Each mode type clearly explains what has been set in stone so a player can decide if it’s right for them or not. In a second row are open slots for a player’s own custom insanities which can be set with as much or as little as needed. When it all comes down to it though however, there is only really one type of game mode which is surviving the onslaught of enemies Twin-Stick style to make it as far as possible to hopefully reach the top of the provided leaderboards.

With only one real mode of gameplay however, the gameplay itself is solid. Controls are very responsive when moving around what is essentially an arena in which enemies will be coming in from every direction and a good portion of the time directly at you and not simply fly by. This is where members of the AIPD get to show off their own fangs. Ships have an interesting design in which there are two selections that must be done before heading out. The first is the weapon loadout which will start with nothing more than a single possibility until others are locked by acquiring points that come from the final scores. Accompanying the weapons are system types that aid the craft such as better cooling systems, using power ups automatically on pickup, or making certain power ups last longer. Various combinations can be done between these two options to aid in a particular player’s play style. 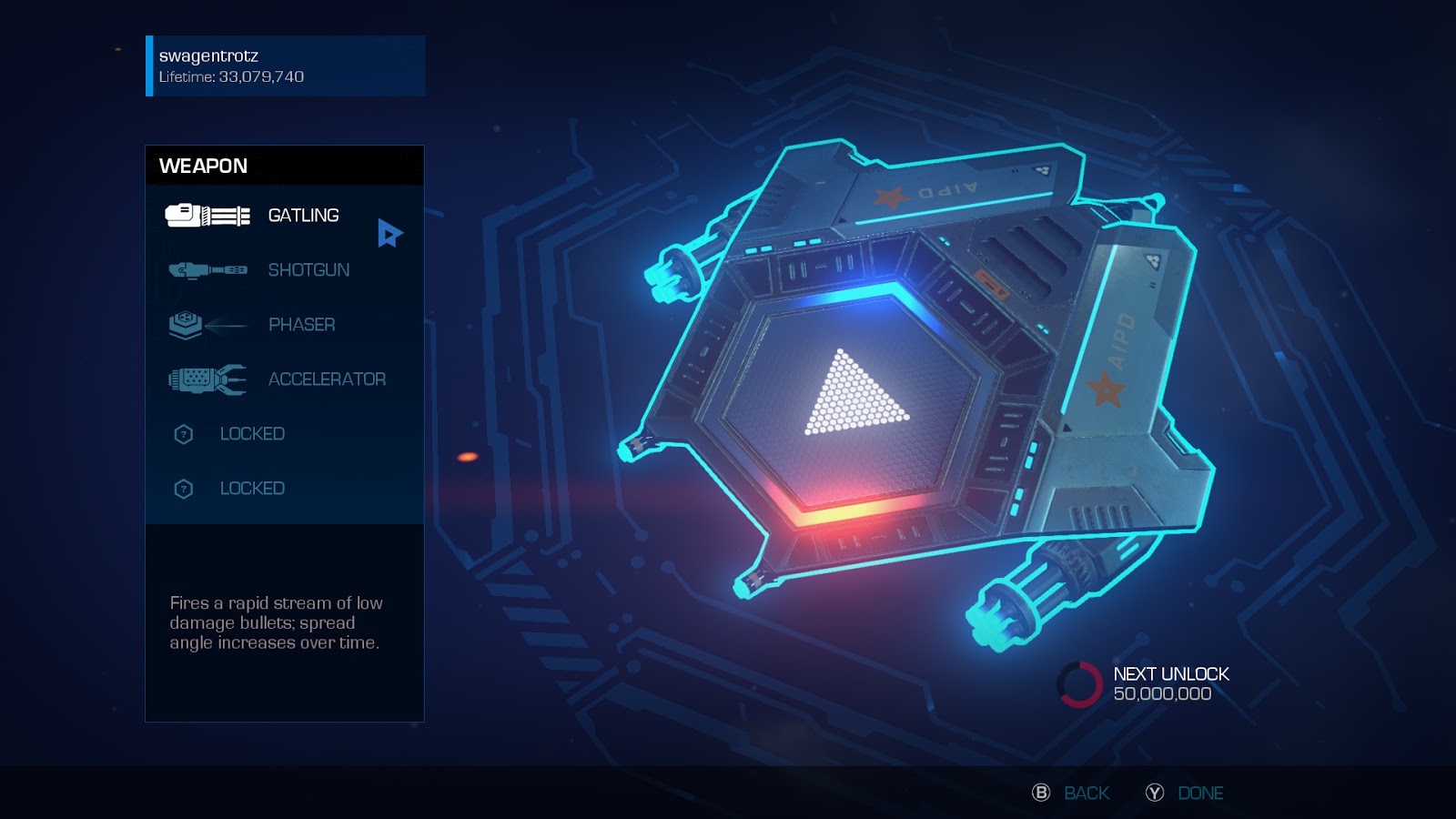 While overheating weapons are nothing new, AIPD has a different take on how it is handled which was intriguing to say the least. Once weapon systems overheat there is a discharge that is ejected from the craft which will detonate several second after. If the craft is too close to the detonation then it will take damage and the only person to blame lies within yourself as you let your systems overheat and you didn’t fast enough to clear the blast zone. Unfortunately this explosion does not damage enemies and therefore can not be used as an interesting form of tactic which would have been preferable. Unfortunately on top of the explosion unfortunately not claiming the enemies which would otherwise have been toasted, if any allies are close then they too will take damage which both / multiple parties will not be happy about.

Up to four players can enter together in order to fight against the Rogue AIs that you are being sent out to face off against. Coop works rather well with the size of the screen increasing depending upon the amount of space that is being put between the players. In a surprising design choice however, while each craft has its health bar displayed, they are linked together meaning that regardless of who takes a hit, everyone takes a hit. This increases the difficulty especially if there is a substantial difference in skill but it also sadly removes the bragging rights of lasting all that much longer than any of your opponents.

AIPD contains some rather solid gameplay elements but sadly other than “different survival modes” which all use the same base there isn’t that much else to do. While there are plenty of challenge options that can be set, AIPD is static in what it offers. If this is enough for someone then by all means go nuts and claim the top of the leaderboards for your own. For players looking for more variety then this may not quite be the Precinct for you.