comments Share
You are reading
Arslan: The Warriors of Legend – PS4 Review 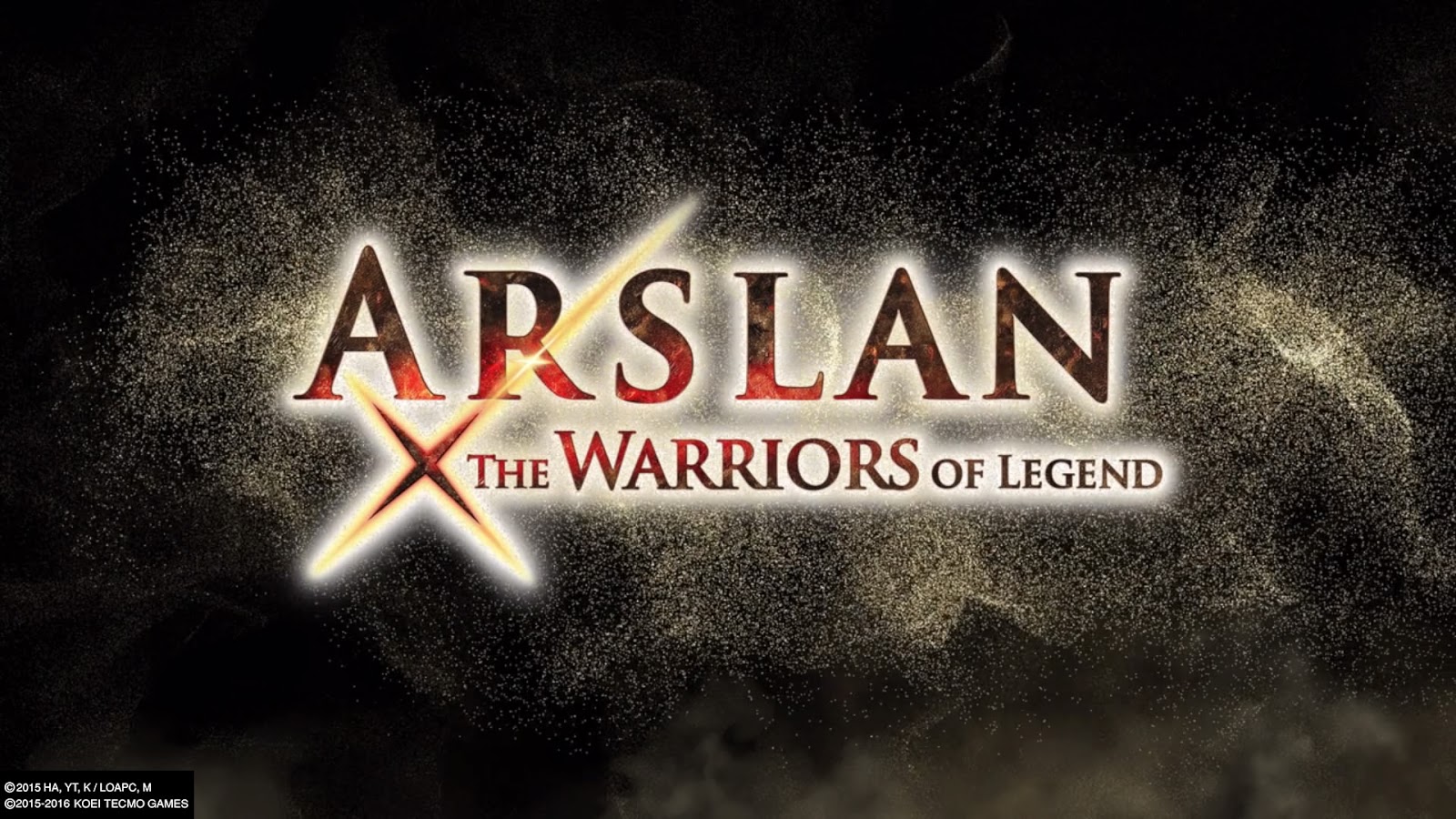 Arslan: The Warrior of Legend is a series that has long standing roots dating back to the mid 80s. Taking on a spin of the historical invasion of Persia (Pars) by the Christian war machine of the time during the Crusades (Lusitania), Arslan is all that remains against the invading hordes as they enslave and butcher his people after defeating his undefeated father and his unstoppable cavalry forces through treachery and some darker magics.

Arslan as both a protagonist and a game shows off growth that was amazing to experience over the ten plus hours of the main storyline. This campaign in order to reclaim the Capital of Pars from the Lusitanian Horde was nothing short of an amazing blend of anime cutscenes and gameplay segments that never once required going through menus in order to advance. This alone was an enormous change from the rest of Omega Force’s entries that are generally comprised of multiple menu levels in order to set up and outfit your character(s) for battle.

Having done away with all the menu transitions everything is much more automatic and thus smooth in its flow heading right into the next cutscene or cutscenes that never leave the player wondering what is going on with the very well structured pace. Having read a good portion of the manga up until this point the faithfulness to the original story was amazing to see. If there had to be one complaint it would be that the other side is not shown off as much give a full picture of the events. This doesn’t really affect the constructed narrative but it would give a fuller picture if nothing else to show that just because they invaded as a horde under the banner of their “one true God” it does not mean that they themselves are unified as they are quite separated in their upper ranks due to their human desires as it would appear from someone on the outside. 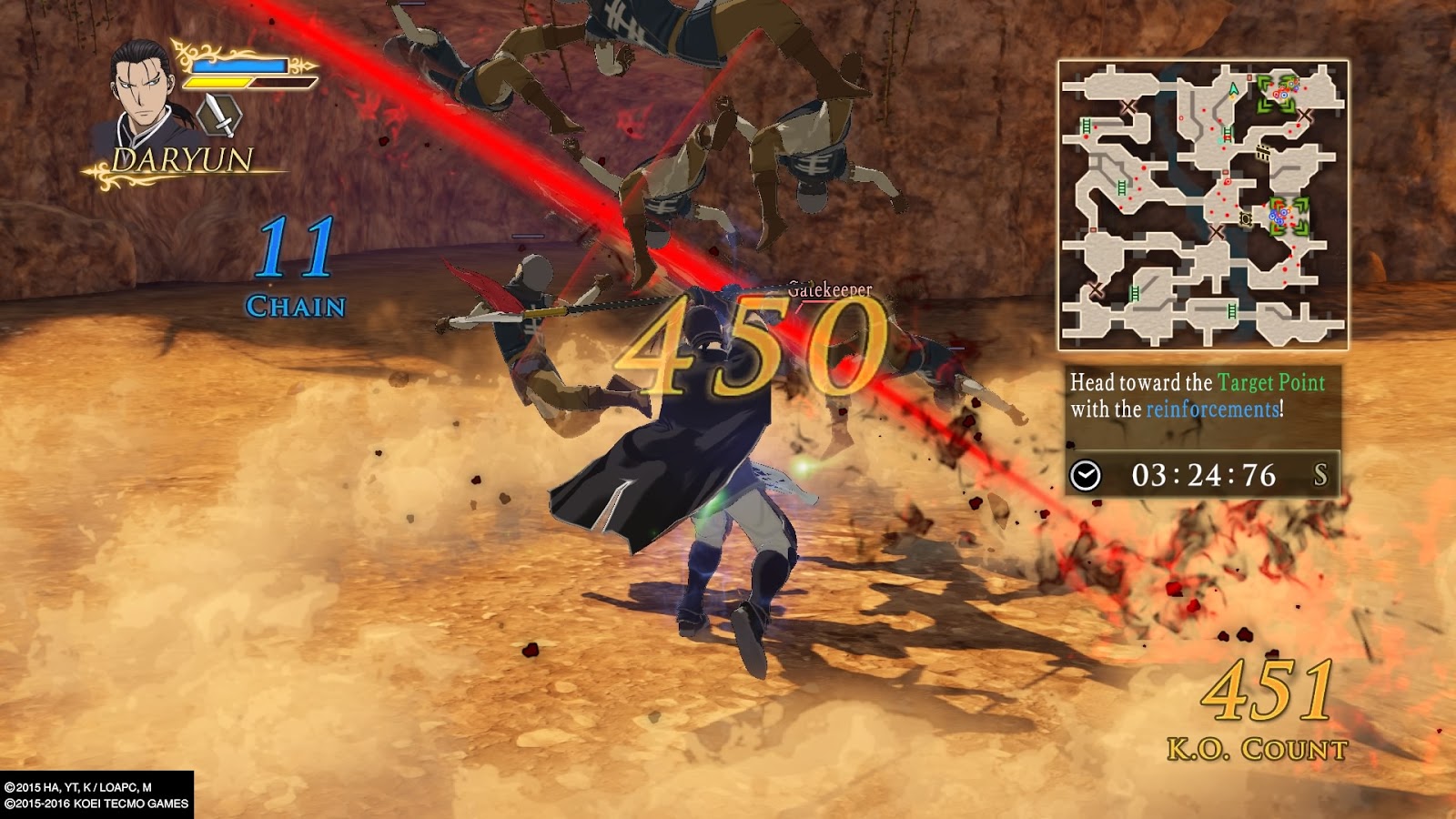 With the removal of the in between stage menu interfacing, gameplay follows along at a very good pace in which still manages to throw in some new elements all the way in the final chapters of the story mode. Having no menus has essentially created an interactive story with different characters having turns in which to shine in the spotlight over the course of the campaign. By doing this everyone is given not only a bit of limelight, but they are used at key points that highlight either their strengths or do the complete opposite having them scramble simply to survive the situation they find themselves in. “Stages” if they can indeed be called that in this case as they are played out sequences of the narrative, come in a variety of lengths and in regards to a character’s limelight the player could in fact see the point of view change between them as it will happen that there will be a character change just to spice things up a little bit.

In regards to the combat itself, Arslan can take a bit of time in order to come into its own groove which works perfectly with the story up until the starting point and the events unfolding thereafter. Starting off with his maiden battle, Arslan himself is in no way, shape, or form, A Warrior of Legend. Quite the opposite really as everyone is essentially saving him in one form or another. As events unfold, and as experience is acquired in both the sense of having participated in several battles and an actual experience counter is filled, Arslan himself starts to move in a much smoother manner as his attack patterns become more fluid and less staccato. This is in stark contrast to several of the others especially Daryun who is second to none in the kingdom when it comes to battle prowess and it shows when from the beginning his combat is smooth and only ever gets better.

Because of its menuless approach, customization options have been kept to a minimum. As characters level up they can get access to new weapons which allows for some different approaches to various foes. With these new approaches opening new avenues it becomes interesting to see how a character actually uses this new weapon type in comparison to another who proficiently uses it as their main weapon. Swords, Spears, Bows for both short and long range, Fists, Paintbrushes and Greatswords are all interesting among some others to see in action with a character’s moveset. To aid characters, as they have nothing more than their provided weapon types, Ranked Cards (C, B, A) can be acquired that can boost parameters such as Attack, Defense both solo or while leading a squad through the various Mardan Rushes. Three cards can be equipped at a time in which their total must be under the capacity that a character currently has access to which is in direct relation to their levels. As double, triples, etc can be picked up, if a certain card type does not quite make the cut then they can be synthesized into a newer random one. 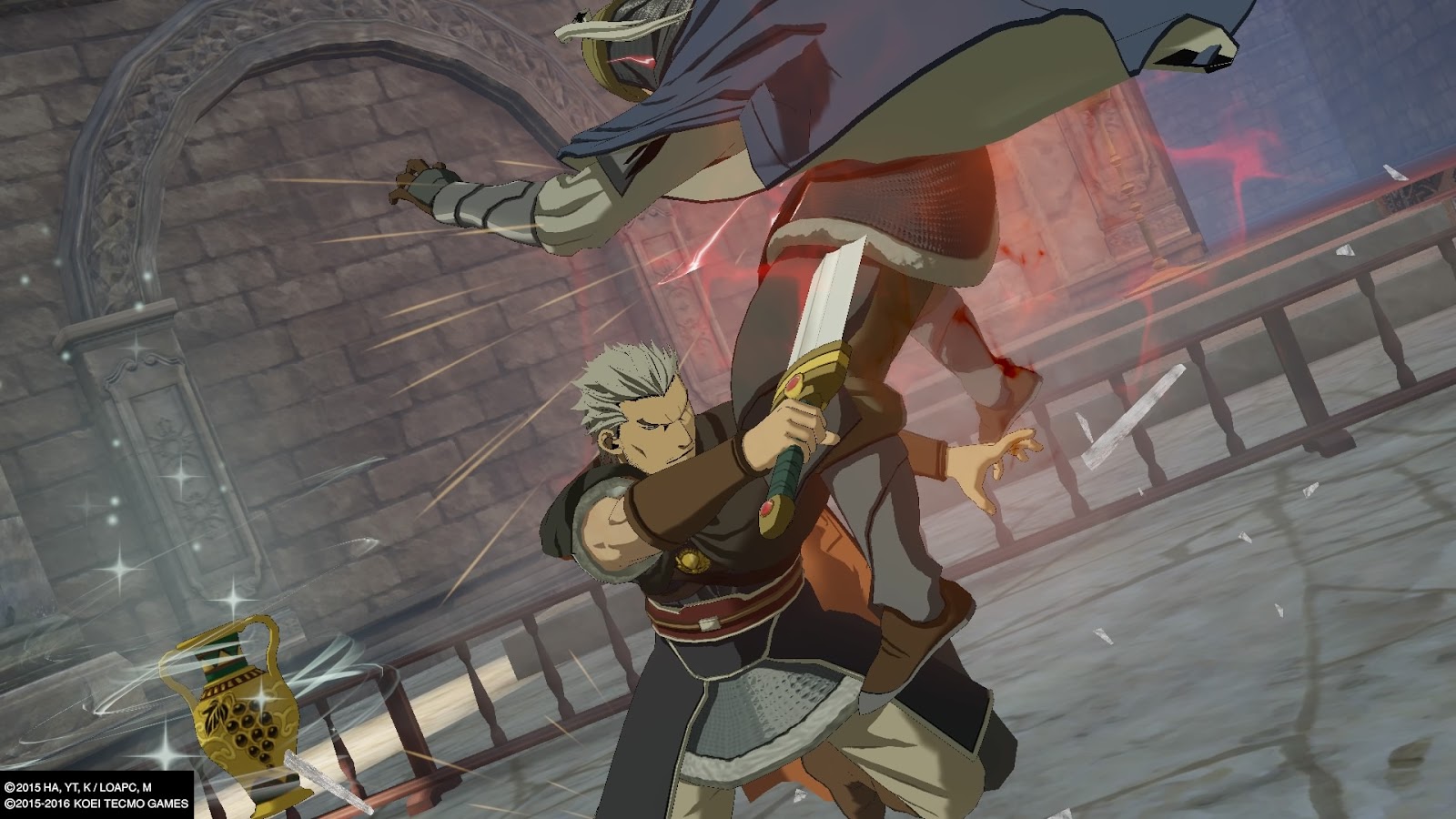 Marden Rushes are a mechanic that are simply in one word. Destructively Awesome. Alright two words then. At select point in a stage there can come an opportunity to perform one of these actions in order to complete a task. Leading a cavalry charge to breakdown rubble or a group shielding a passage, leading a footsoldier charge in order to break down a gate, or simply pointing over to where you wish to rain death from above with a barrage of arrows to set a war machine or supply stock on fire. All of these actions can be seen on the map through a blue spiral and visually through what almost looks like a swirling blue vortex. Once engaged, a meter will deplete visually notifying you as to how much time is left to either complete the objective or simply rain mayhem upon your enemies. If an objective is not complete then the Mardan Rush point will respawn in order to do it all over again.

With the amazing presentation and blend of both gameplay with its anime-esque cutscenes to bring it all together, as not all are pure anime, sometimes the cel shaded approach for presentation can give way to a bit of jaggedness in the character models as if the resolution isn’t keeping up. It doesn’t happen often but it is enough to notice and mar the otherwise gorgeous visual appearance of the characters.

On a whole, with what Arslan may not bring to the table in mechanics as say Dragon Quest Heroes or Hyrule Warriors, it more than makes up for it with an amazing blend of storytelling and gameplay. It was extremely refreshing to simply flow from one field of battle to the next without ever having to select ready or go through a vast amount of inventory and skill options. I for one would be more than happy for Omega Force to re-visit this formula in the future or possibly create a blend of it with something else.