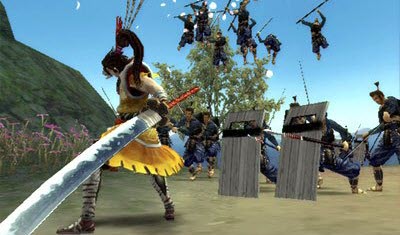 Devil Kings is a hack and slash game where you select a warrior and fight entire armies with melee weapons. There are also some soldiers who follow you but they are useless, so, basically you are on your own.

The story is non-existent, the dialogues are incredibly cheesy and the characters are too flamboyant and out of context. I don’t think a warlord would say “let’s party”, for example. I don’t expect a serious plot from an action game but they could have devoted a few hours to writing something decent. Anyway, the gameplay is better.

Your attacks are normal, prime, special or super. Normal attacks can be combined and the longer a combo the more enemies it hits. Prime attacks are very weak but make your enemies susceptible to more damage for a few seconds. Specials are useful in specific situations, for example Venus can extract her disc and make opponents lose their shields or hit big guys from a safer distance. Super attacks are available once your fury gauge is full; this happens when you get hit or strike enemies that were “primed”. 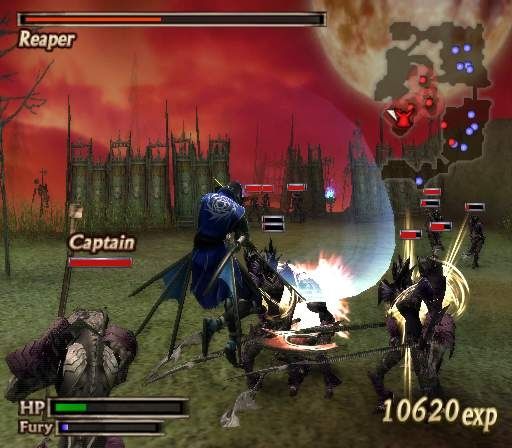 Enemies include foot soldiers, archers, dudes with big weapons, commanders and bosses. Foot soldiers charge in large groups but they are stupid: they have slow reflexes and they step to the side when you run into them. Of course, if they were not stupid, they would surround and eliminate you, since there are hundreds in every stage. Archers are dangerous because they shoot flawlessly and retreat when you reach them. Dudes with big weapons, such as huge clubs, deal lots of damage and are more resistant. Commanders call for reinforcements continuously, so you should kill them quickly. When you do, their guards run away scared, which is satisfying. Bosses are colorful characters with special attacks and plenty of stamina. You must defeat them to complete a stage and the best tactics is to use super moves.

Green or purple objects refill your health or fury gauge, respectively, and can be found in chests or when you kill a commander. Treasure chests also contain better weapons, armor or magical rings; you can equip some of them at the beginning of the next stage.

The scenery is of moderate quality but the animation is very good. Your character moves fluidly and has impressive combos. Enemies are nicely-drawn, with various weapons, clothes and armor, and there is no slow-down. Surprisingly, there are cut-scenes where animation is used, giving “Devil Kings” a special flavor.

The sound is nothing special, except for the music at the main menu, which is cool. 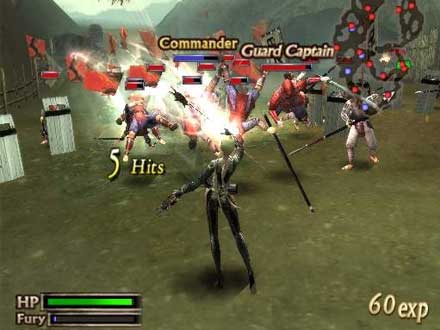 The control is easy to learn, although I had to read the manual to know what prime attacks are. By pressing a button repeatedly you perform a combo and you can change its direction with the left analogue stick. You can also combine prime and normal attacks any way you want. So, if you perform a three hit prime combo and press the normal attack button your character will perform the fourth movement of his/her normal combo. “Primed” enemies have yellow health bars, which helps you identify them easier. When a stage ends you see how well you fought and the items you found.

The game is not hard but if you die you must replay the entire stage. There are two ways to play, killing all commanders and collecting all items or running as fast as you can to the boss. I often chose the second tactics because there were occasions where I killed a thousand enemies, reached the boss and was defeated, so I had to try again. Something that makes the game easier is the fact that when your health is very low your fury gauge is filled continuously. That’s how I beat the last boss with Venus. 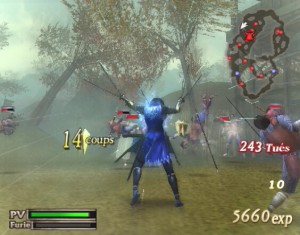 “Devil Kings” has some replayability because if you select another character you see a different part of the story, battle in different stages and unlock more fighters. Moreover, characters don’t behave the same way, for example Lady Butterfly fights with pistols and cannot charge in the midst of entire armies like Venus does. Lastly, there is an “easy” mode, where you still face great numbers of opponents but commanders and bosses have considerably lower health.

“Devil Kings” is not a spectacular production and there were several times where I thought of quitting. However, I insisted and finished it. After all, it is very short: it took me three hours of clean time to complete it and about six hours in total. Friends of hack and slash action could derive some enjoyment from exterminating its massive, mindless armies.