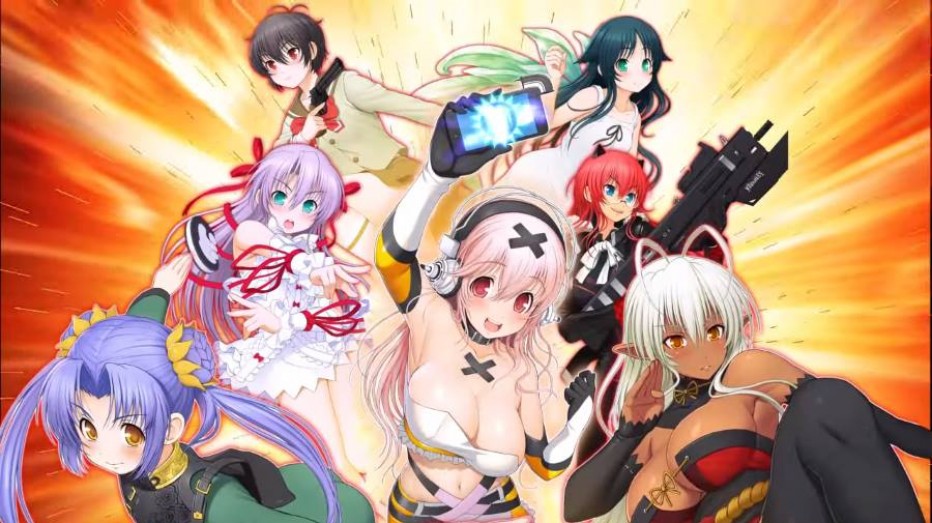 A Veritable Rush of Superb Mechanics and an Insufficiency of Game Modes.

I enjoy anime. I adore 2D fighting games. And I’ve read through some fantastic visual novels during my lifetime of comedic peasantry, yet somehow, I didn’t know what I was jump-kicking into when my Editor-in-chief requested a reviewer for Nitroplus Blasterz. Eyeballing the title, I figured I’d be scaling the treacherous cliffs of K2’s Magic Line with a canister of nitro on my back, blasting away ice sheets so as to expose and recover my lost lover’s frozen corpse, and dragging it down to base camp before the ghost of Bill Paxton stabs my bundled heroine with an empty syringe. But instead of a supernatural gaming sequel to the tragic family rescue film Vertical Limit (Vertical Limit II: Mountain’s Infinite Explosion!!!), I discovered, with a search engine powered by inquisitiveness, an attractive fighting game with a roster of sweet yet aggressive ladies, who originate from a variety of Nitroplus properties and visual novels.

Thankfully, as to be expected from most titles published by the mighty XSeed, Nitroplus is a little more intricate than the bopping beauties and crossover ties might initially have you believe: With precise controls, characters with distinct personalities evinced through their move-sets, and battle mechanics that are easy to grasp while having the potential for frenetic complexity, Nitroplus is a game that rivals most contemporary brawlers when it comes to pure enjoyment. In fact, it’s so damn fun that you might be able to overlook or cope with the lack of game modes (there isn’t even a tutorial), lifeless stages and presentation, and the upbeat but often unremarkable music. 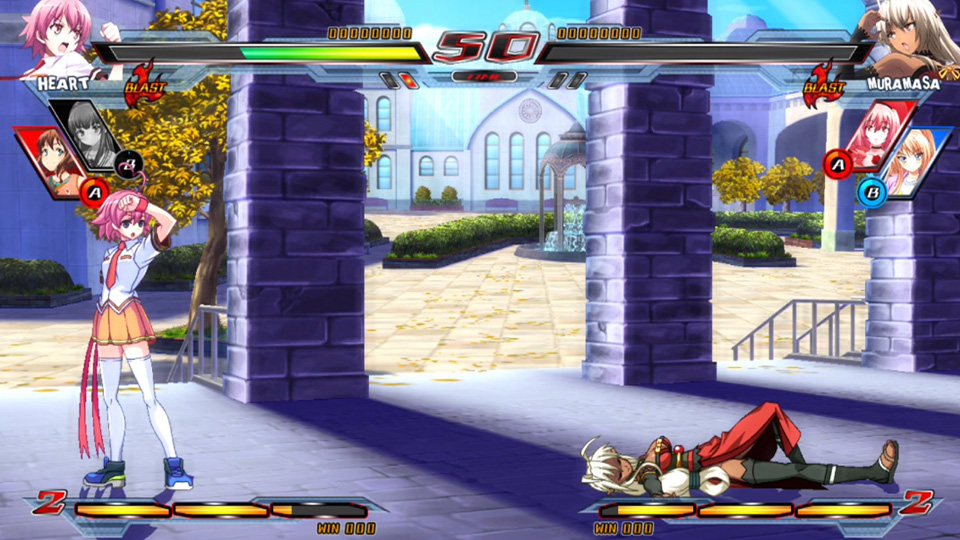 As someone who isn’t impressively familiar with Nitroplus, I had no idea who the hell the majority of the 14 playable characters (two of whom are free DLC for the first month of release) were or where the hell they hailed from. But after experimenting with each one’s thigh-bruising move-set, I was absolutely compelled to scoop my jaw from the carpet and research their origins; these ladies, warning all not to take their cute, innocent appearances as feminine fragility, rock the arena with hyperbolically impactful PG-13 brutality. This is thanks to a fighting system that provides speed, input accuracy, a variety of “Super Move” mechanics that dramatically extend the length and dazzle of base combos, and offensive/defensive options that offer fairness and flexibility for most play styles.

Mind you, there’s nothing new or mega-extraordinary about said fighting system, but that doesn’t take away from its solid construction, surprising intuitiveness, or, once you familiarize yourself with multiple characters, the unique feel of each lady’s fighting identity. Basic combos, which are executed by compiling a succession of weak, medium, and strong attacks, are reinforced by special attacks of the half-circle and charging variety to accumulate bars on your Power Gauge, which allows you to perform one of two Super Moves: Variable Rush (consumes 2 units of the power bar), a graceful flurry of fists and feet that acts as a sort of savage auto-combo; and the Lethal Blaze (consumes 3 units), a character’s signature, stylish, and career-ending eruption of ultimate power, which not only prompts a short cut-in animation of the offensive character posing before performing, but also has the potential to rob an opponent of over half her precious life gauge.

Each character can also summon the assistance of two partners (of which there are 20 to choose from) with a tap of the left triggers, once the respective gauge of each partner is automatically filled throughout the round. Part of the intensity of learning the fighting system is experimenting with each partner’s distinctive move. Most of them have outlandish attacks, like calling upon a lumbering horde of undead to trample your foe into a daze, but others have support moves, such as strengthening your defense or slowly replenishing your Power Gauge. Whatever the support characters’ function, mixing their moves into the fray generates an environment of strategic mayhem, in which a fantastic blur of lasers, katana, and laced thighs gracefully overpopulate the screen. 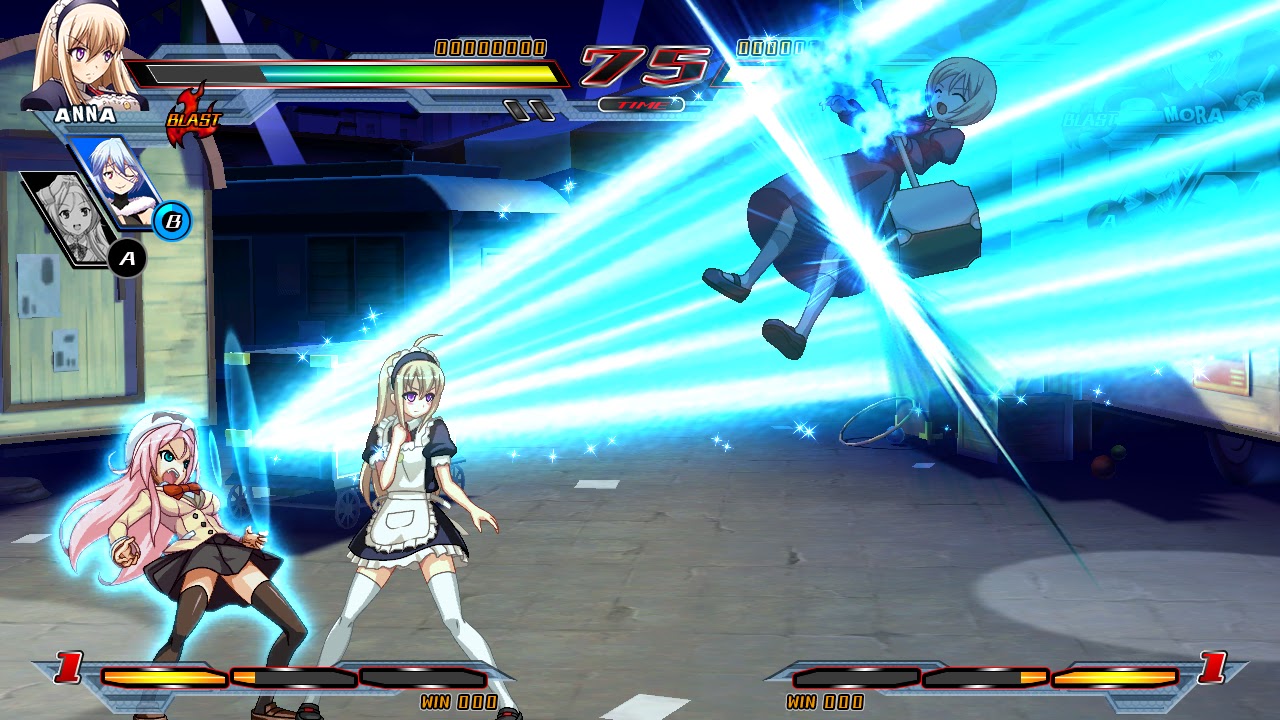 Actually, all this on-screen pandemonium is so mesmerizing, you might overlook the barren stages, with backgrounds so devoid of motion and enthusiasm that if you stared at them in isolation, you’d start feeling inadequate both financially and sexually. Heck, the combat is so fun, it might convince you that the music is actually memorable, which it isn’t, and partially responsible for your unstoppable winning streak. You might be so hypnotized by Super Sonico’s shapely charisma and feline rush that you’ll say “Who needs more game modes or a decent story or a competent in-game tutorial? Just give me more Sonico, all-up-in-my-face!” That’s the possible effect NPB’s fun factor can have; you’re aware the game’s many inefficiencies, yet you’re too pleased by the combat to give a damn.

Yes, NPB is missing a lot of polished characteristics we’ve come to expect in 2D fighting games (that is, anything developed by Arc System Works); however, if you are a devotee of anime, manga, Japanese culture, or interactive competitive fun, and also appreciate the artistic muscle of simple but undeniably solid fighting mechanics, Nitroplus Blasterz: Heroines Infinite Duel is a pleasing acquisition. It definitely won’t dethrone your current favorite fighting game, but it will be a worthy supplement to your flashy fighting collection.

*In terms of network performance, getting owned by players online was just as smooth as getting owned by the CPU offline: I didn’t experience any slowdown or hit delay. Finding a variety of opponents to play with however, was difficult when the game first released.