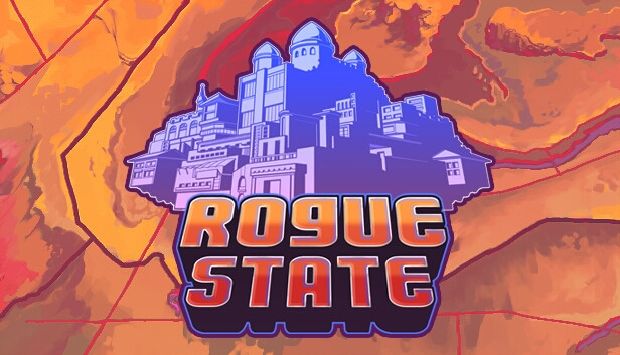 Sometimes I think I would make a fantastic Empress of the World. Not a queen or a President, but an Empress. Then games like Rogue State come along and shatter those dreams by reminding me how dismal I am at running a country.

An interesting mix of strategy and politics Rogue State puts you in control of Basenji, a Middle Eastern country recovering from a violent revolution after toppling it’s monarchy. As the new president you must maintain power by walking the delicate political line of providing for your populous, placating various interest groups, and lobbing insults about western imperialism while trying not to get invaded by the US or tick off the UN. All this while fending off your power hungry brother, the circling vultures that are your neighboring nations and working on some secret clandestine projects. Make no mistake, this game is hard! I am no noob when it comes to strategy and politics and I still haven’t survived the required time to beat this game. While providing a real challenge, Rogue State shines in some areas while others have definite room for improvement. 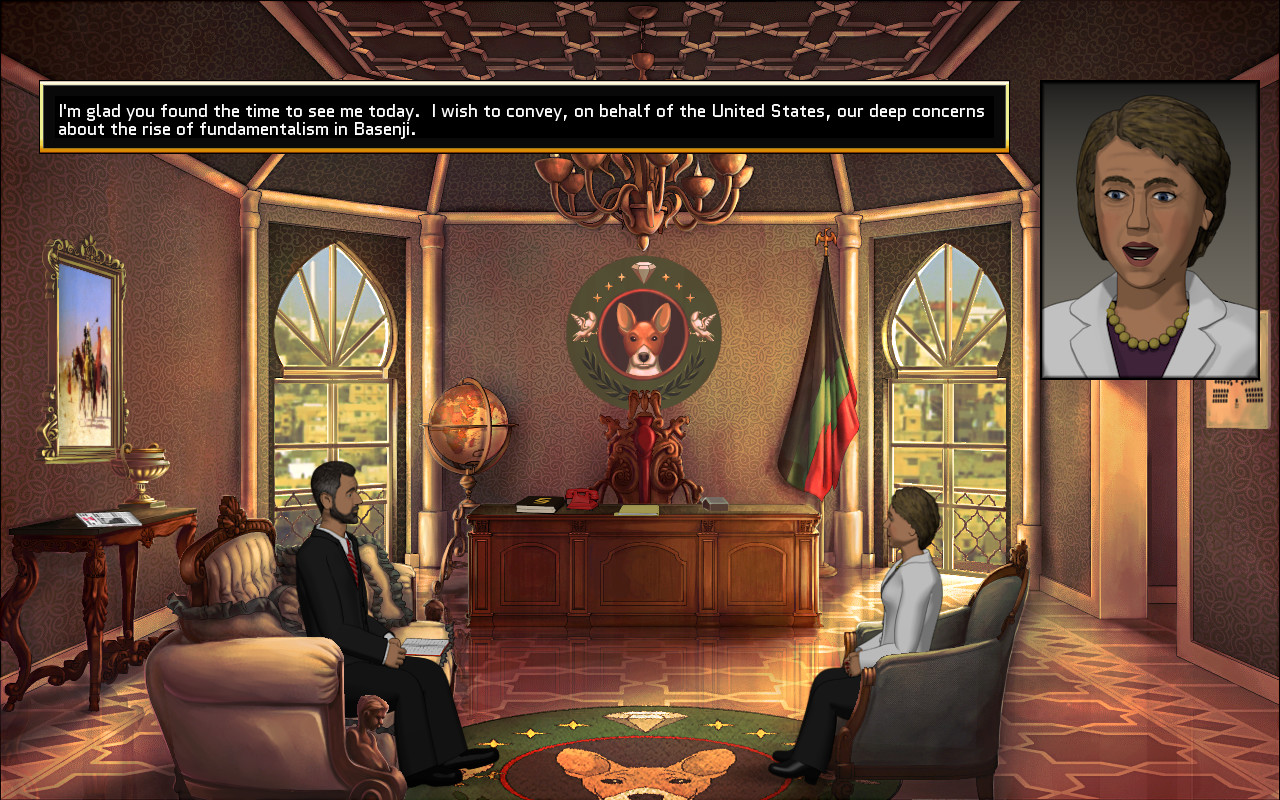 Mechanics wise, Rogue State boasts a typical assortment of options you can use to interact with your state. You can buy and maneuver military units, sign deals with neighboring nations for resources and trade income, set policies to dictate how your society runs and rebuild your country’s infrastructure. How these interactions are carried out is both interesting and infuriating. When accessing a menu your character actually gets up and moves around his/her office in a delightfully comic book like art style. What to check out how your country is perceived in the world? Click on the newspaper menu and your dude will actually get up from behind their desk, meander over to a side table and pick up the paper. It’s cool for the first 5 times but quickly becomes annoying. Even though you can skip the majority of the animation you still have to see the beginning and ending sequence. To me, it made the game feel much more tedious that it otherwise would have been. It’s obvious a lot of work went into this aspect of the game but it’s time that could have been better used.

Just as in real life politics, you’ll find yourself spending an inordinate amount of time balancing the various interest groups in your state. A political policy that ingratiates you to the Liberals will likely anger the Conservatives and miff the Fundamentalists. You’ll spend a lot of time in the policy screen desperately trying to stem the hemorrhage of respect from one group or another by tweaking the policy sliders. The lack of policy options and how often I had to go against my ideal policy mix for my nation made this aspect feel less than polished. I felt like I was allowing public transport so I wouldn’t be facing a rebellion rather than actually wanting to shape my state’s culture or be environmentally friendly. I was always reacting rather than shaping the hearts and minds of my people. 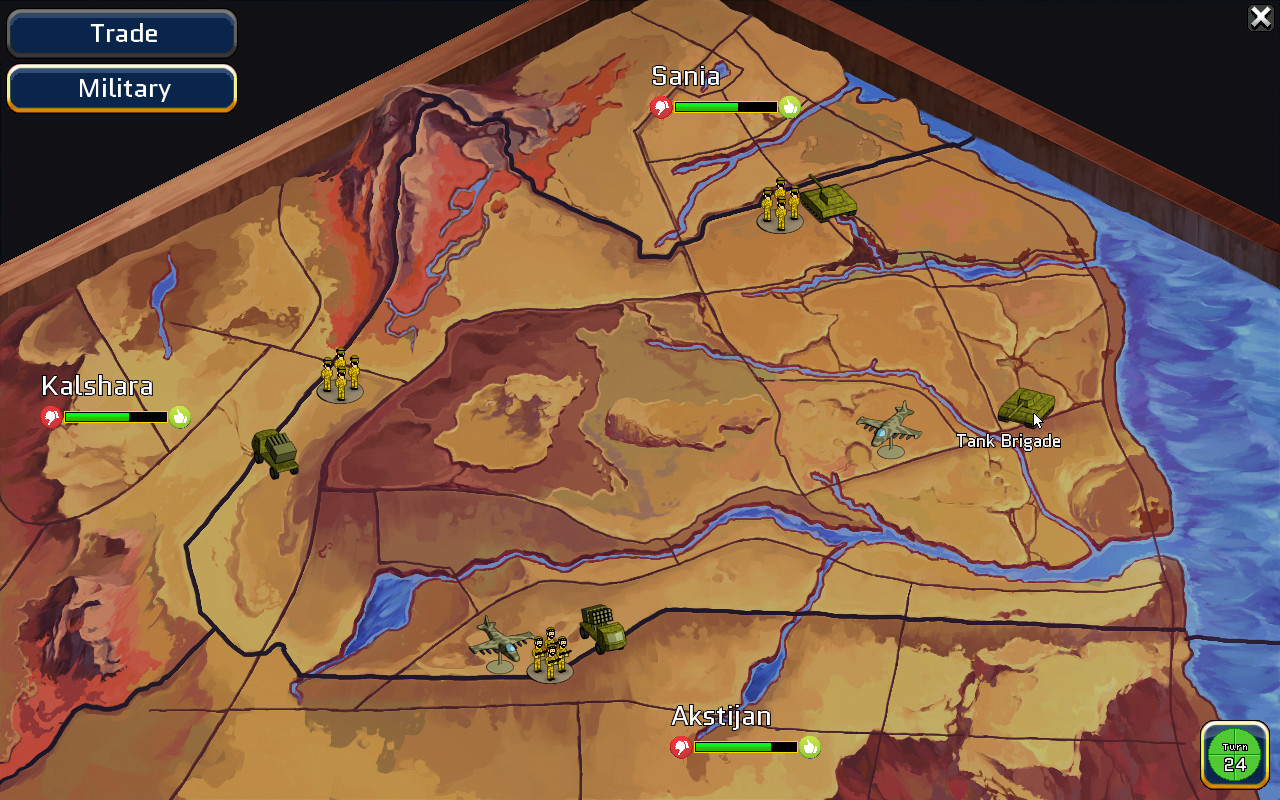 At the end of each of your turns you will have to face an event, a multiple choice issue that can make or break your nation. If the gods of the random number generator hate you, abandon all hope of winning this game. Sometimes the events are trivial and you can pass them unscathed, other times none of the choices are favorable and the outcome is economic ruin. Once you slide into debt it’s very difficult to climb back out of it with support for the senate and your interest groups in tact. Many times I faced an impossible decision only to be walked out of my office by my dear brother Farouk a few turns later after creating a financial meltdown of American proportions. These challenges aren’t balanced and you can easily face an issue that will swamp your fledgling economy early in the game.

Another interesting games aspect that could have used more spit shine are the state address you are forced to perform at the end of every 12 turns (a year in game time). Your speech is made up of selected paragraphs that touch on an issue like poverty or military might. You are warned that these paragraphs must match up, contradict yourself and the people will see through your lies. Get it right however and the added boost in popularity can help you cling to power for a little longer. For a game that grabs you by the shirt collar and chucks you in the deep end from the start, these speeches tell you exactly what phrase you should use next by a the number of plus signs under them. Often I found the issues didn’t match up but it was more beneficial to simply select the paragraph with the highest rating than to stay on your own personal message. The paragraphs also don’t change from year to year depending on what’s going on in your country so the idea feels very cobbled together and a little confusing. 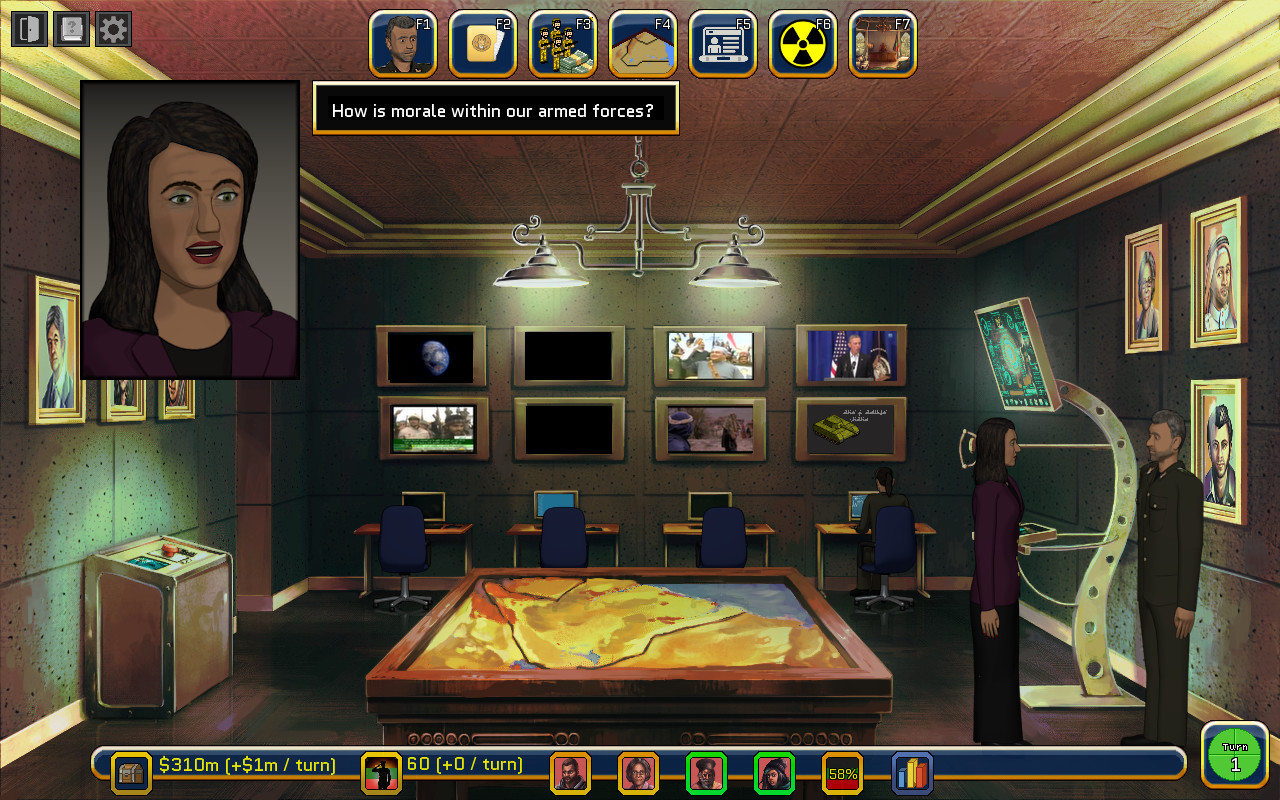 Rogue State also skirts around a lot of political issues that leave it sort of floating. You’re the leader of an emergent Middle Eastern country but it looks like you’re leading from the White House. aside from the odd comment about the warmongering US and the cold visits from the US ambassador, the politics of your situation are skated over. There is no real social criticism that I expected to find in Rogue State. Whether that was intentional or just not executed properly I feel like a lot of depth had been missed.

Overall Rogue State veers away from the standard political strategy game, for better and for worse and provides a challenging experience. It’s got a lot of character and I really liked the storyline and artwork. Every short play through is gratifying enough that you keep wanting to try again, despite some unfair disasters. There was some obvious love put into the story, the characters and the animation. Regardless of some of the broken mechanics, Rogue State makes for a good time.