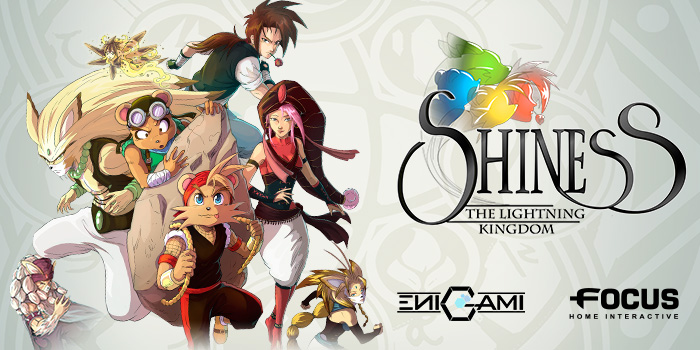 It is obviously still quite early, but something about Shiness has simply been appealing to me so far. Here’s some more assets and a whole lot of information about the upcoming release.

Shiness is a new action-RPG developed by indie development studio Enigami. Travel through an enchanting yet hostile world where the lands of Mahera have become fragmented. The new series of screenshots unveiled today will tell you more about the game’s five playable characters.


You play as Chado, a young and adventurous Waki able to communicate with a spirit from nature, the Shiness, and who masters the element of Earth. You will helped by Poky, an engineering genius able to repair anything mechanical, who is able to manipulate magnetic fields and electrical currents. Kayenne is a powerful Shelk warrior, who harnesses the psychic gift of Telekinesis; with this power, he may interact with the environment remotely, or paralyze enemies in battle. Askel is a fearsome mercenary, whose whip is destructive in combat, but is also useful during exploration to retrieve items normally out of reach. Finally, Rosalya uses the Fire element to disperse darkness, reveal hidden items or enemies, or inflict heavy damage during combat.


Complementarity between the members of your team will play an important role, as much during exploration as in the dynamic, 1-versus-1 combat of Shiness. Once in the arena, it’s up to you to adopt the best timing to chain punches, kicks, magic attacks and destructive combos. During these duels, your companions can intervene to replace the lead fighter, or help when required. Task your teammates with healing you when your health is low or to cast a spell to boost your strength at the start of every fight, and wisely use the Elemental affinities of each characters to weaken your enemies.


Shiness is an Action-RPG developed by French independent studio Enigami, that will take you on a journey through an enthralling universe, on the verge of collapsing following the fragmentation of planet Mahera.


Play as Chado and his companions, traveling through the celestial islands on their flying ship. After a crash-landing on one of the most hostile of the celestial islands, you find yourself in the middle of a conflict involving multiple kingdoms. However, this explosive situation might find a peaceful outcome, with Chado’s newfound unique ability to perceive and communicate with the Shiness, a mysterious spirit embued with magic.


KEY FEATURES
•Travel through an enthralling and interactive world as Chado and his four companions, and develop your characters.
•Hyper-dynamic combat, mixing magic with fighting game combat mechanics (hits, combos, parries, etc…)
•Develop 2 types of skills (physical attacks and magic) and unlock new talents and spells.
•Explore a vast world with multiple environments, that you will interact with thanks to you and your companions’ special powers and skills.
•Numerous quests and side-quests will give you the opportunity to develop your characters and their reputation.


About Enigami
Enigami is a French transmedia studio, specialized in video game development. Enigami unites a team of passionate developers who work since 2013 on Shiness, an independent role-playing game.


The story of Shiness takes its roots in an enthralling and colorful universe, that will take the player on a journey for an epic adventure. If you want to learn more about Enigami, you can learn all kinds of stuff about us on our official website: http://www.shiness.fr/