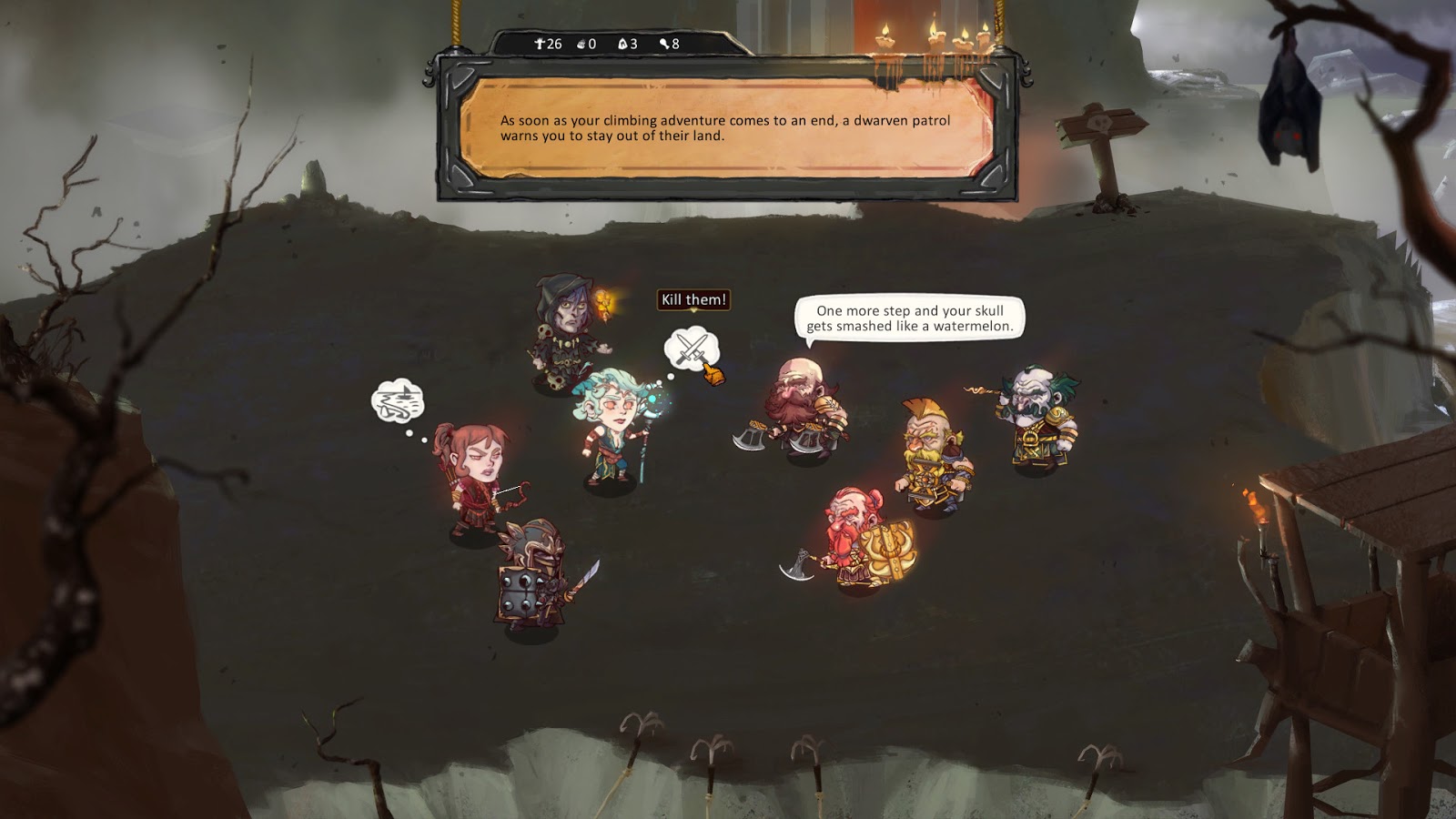 Nothing quite beats sailing out and across the open seas in search of adventure. Filled with various factions that either want to hunt you down and steal everything you own to those that would rather befriend you and have you between them and those previously mentioned, welcome to the wondrous water world of Overfall.

Overfall is a Strategy RPG that starts off with a single purpose and no current real way of getting there. At least not the first time anyways. Starting off with two randomly named characters, or self named if you really want to, take to the open seas with your Fighter and your Cleric. What exactly are you supposed to do? Well that’s the fun part as it’s up to you to figure out after being given the downlow on your current predicament.

Starting off with nothing more than the two base classes as more can be unlocked later on through events, things are generally not quite in your favor as more often than not the deck of fate will be stacked against you. Out on these same waters are Orcs, Undead, Dwarves, Elves, Humans, Goblins, and DAMNED Vikings. Each have their own or shared islands that can be visited with generally one of two things that can happen. The first is telling you to get the hell off their island or they’ll kill you as some people just have no social graces, and the second is either a one part or multi-part event / quest that will lead to some nice rewards at times. Or more death. 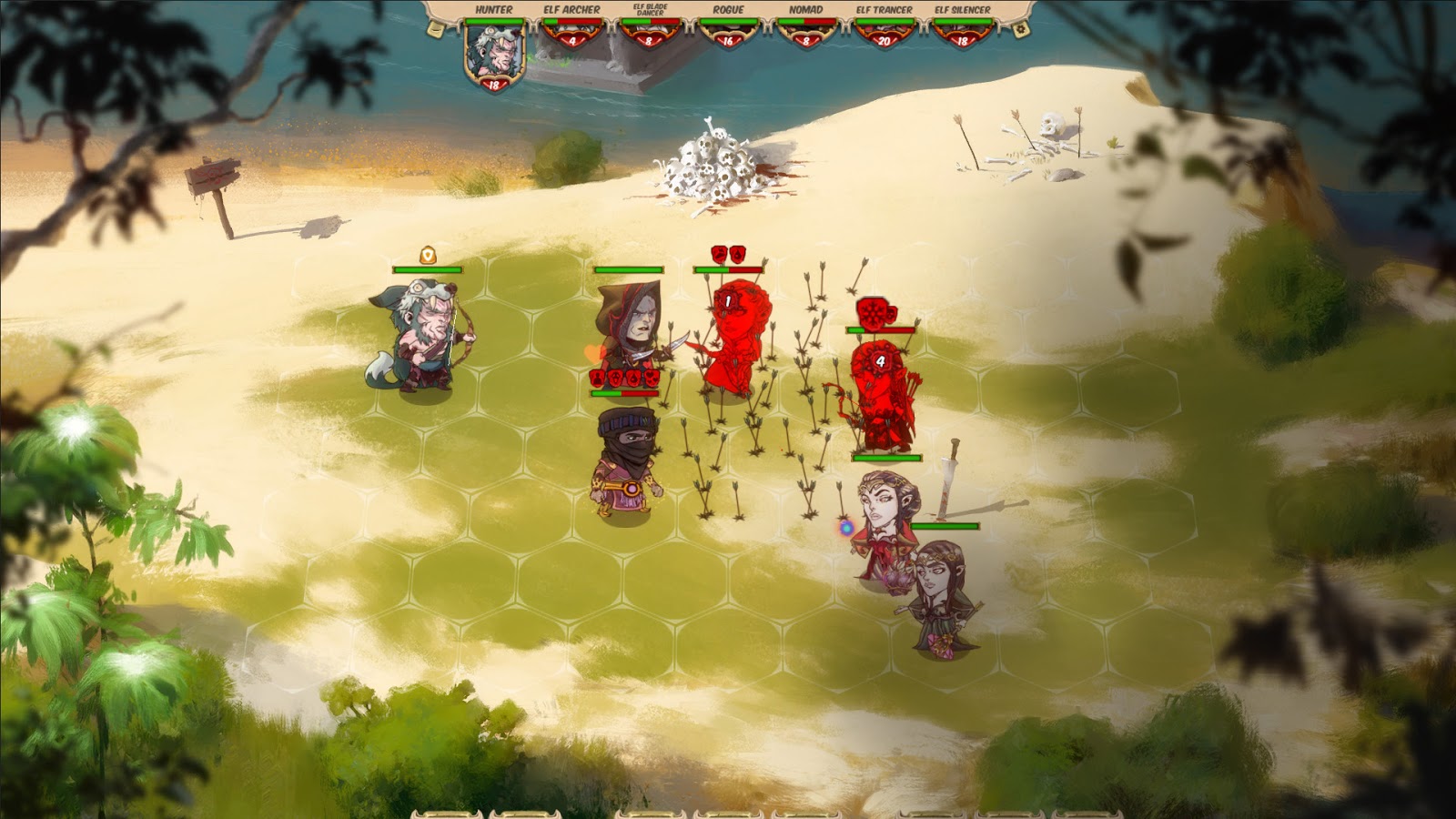 Traveling does not take up resources but bartering and healing up after a skirmish do. The local currency, food, runes, and dust will all play a part in your journey. Money allows for your party to buy a variety of goods such as food for example which can be used to heal up any missing health after a battle. Runes allow for a fallen party member to be resurrected at an altar as these stones are required as payment for Death to bring them back. Dust can allow for faster sailing if you really want to catch up to another ship, save time as the days will constantly tick away, or run away as another damned Viking Ship is on its way to kill you. Again. I had lots of issues with Vikings.

With lots of people to encounter while sailing through the seas there are those that would join up with you given the chance. This is great as sometimes five versus two for an encounter just is not fair. Because nothing worth having ever comes free of charge, unlocking of an extra character slot is going to take some work. In order to unlock another slot for one of these characters you’re going to need to make a bit of a name for yourself which is the hard part. Making a name for yourself in this case requires reputation from any faction but in order to get any reputation from a faction you’ll need to land a quest that actually hands it out instead of simply giving you a reward. It’s a lot easier said than done. If the party falls in battle then anything acquired is now moot as you must start all over again. Thankfully anything unlocked in a play through is available in the next when it comes to the characters that can be recruited.

While sailing around not everything is peaceful which is why there is thankfully more than one way to kick the crap out of a Viking… err… salty sea dog? At any rate. The combat system is a masterfully designed hex based strategic affair that incorporates what could have been multiple stages into a single turn. Once the order of combat is determined, characters have three phases to their turns in which any or all can be skipped if you do not need them to take an action. The first phase is movement in which a character can either move or perform an ability such as a leap strike or pull in an ally in order to heal them a little bit. The second phase allows for abilities to be used such as adding or removing buff and debuffs, using status ailments, or healing an ally. Finally the last phase are options for a good old smacking of thine enemy. Once all three have been completed it moves on to the next participant. 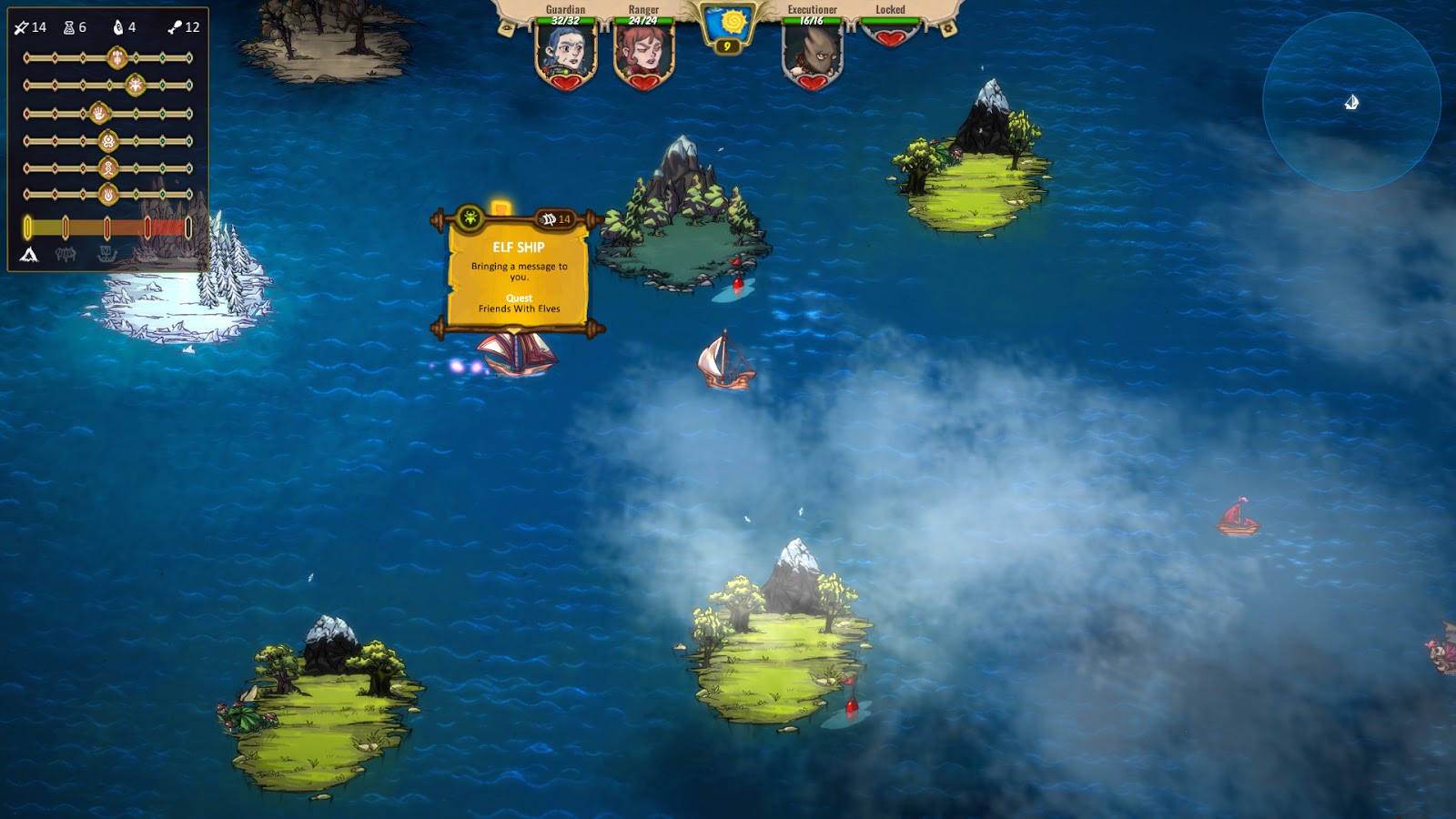 Winning a battle was interesting as it’s not always sunshine and rainbows. Actually in certain cases I was a tad miffed at my “reward” and wondered which God of the Sea I pissed off. Keeping things very interesting is that after winning and possibly obtaining any currency, food, runes, or dust are upgrades of a sort for those that survived the battle. Additional points of accuracy and possible life leeching were amazing to see until apparently I could also spontaneously combust or was now tired and lost points to my accuracy and my physical might. Things are very random and it’s how you make the most of it that will determine if you live or die on the open waters or one of the various shore lines.

If your party does end up falling in battle that is pretty much it but not the end. With plenty to learn from on each run, anything unlocked such as characters to join and new classes to choose from will be available for any subsequent play throughs. In certain cases hitting the Surrender option isn’t such a bad idea if you already know that the fight is lost. This can especially be the case when you know that you’re not making it out of that horde of ships coming your way as allies are already dead and the sole survivor doesn’t have much left because the pantry is empty and there isn’t a scrap of anything left. Lessons learned.

Overfall is already playing host to a great deal of content while in Early Access. It’ll be interesting to see what is added or changed according to feedback before its full release. One thing is sure however, those I’ve got a bone to pick with Vikings now and they won’t know what hit them the next time!