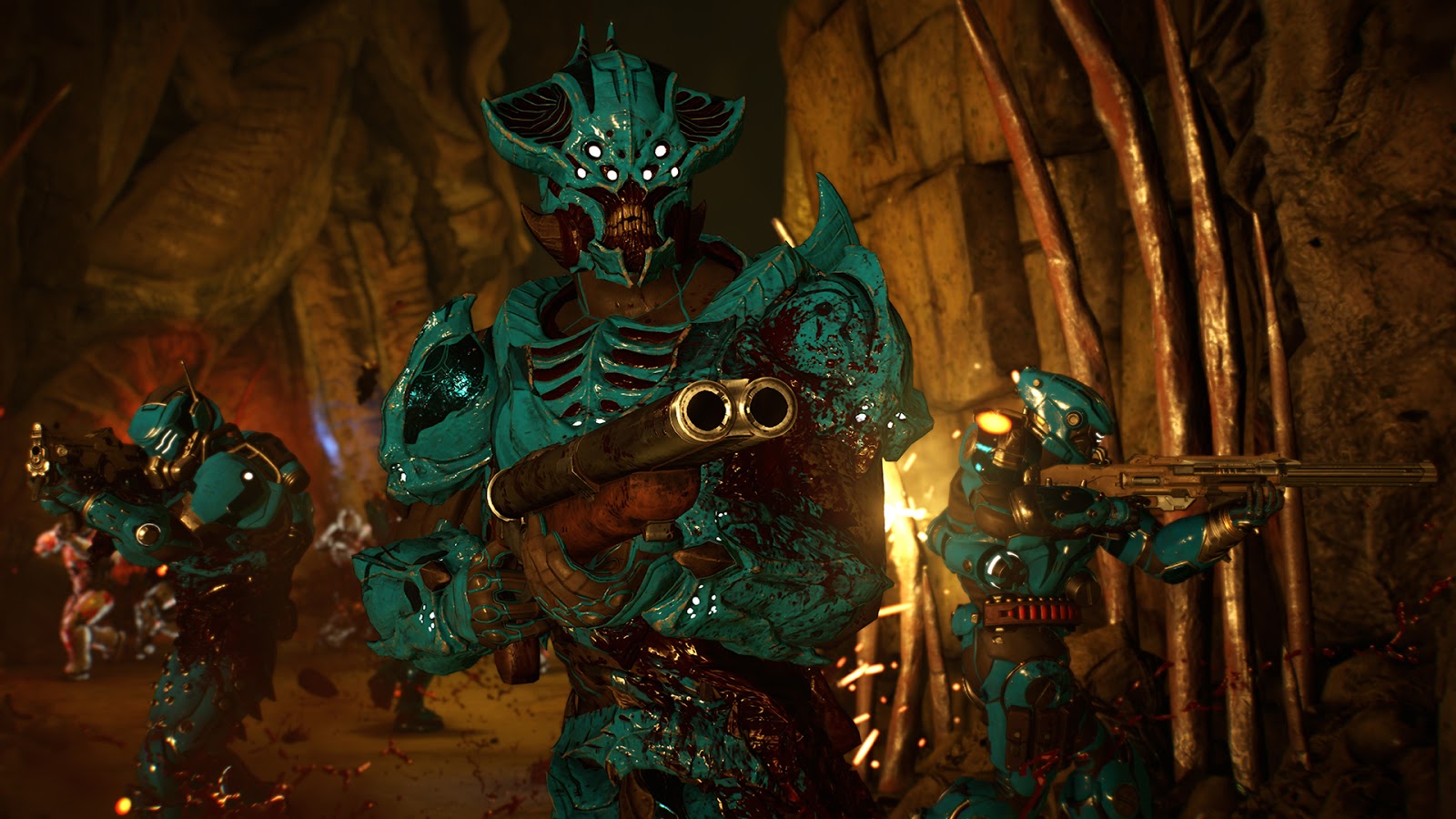 I have been gaming for a long time now, and more and more lately certain video games just tug at my nostalgic strings. While anything related to the NES seems capable of doing that, there are a handful of old PC games that do so just as effectively and DOOM has always been right there among them. Chris and I spent a good deal of time over the weekend playing the DOOM Open Beta, and came away pretty happy with what we saw, though we both had different takeaways and questions afterwards.

Chris is younger than me, having grown up on shooters like Call of Duty, Halo and Battlefield. I still remember the original Wolfenstein fondly. It was a fun game that really changed how a lot of players, including myself, viewed shooters. Still, as ground breaking as Wolfenstein was, the setting never really managed to capture my imagination.

Then DOOM came along.

I grew up attending a private Catholic school, yet had a copy of DOOM installed on our physics lab computer that I would often play over lunch time. Of course the teacher was almost never in the room, so I did not have to explain demons, people impaled on spikes or satanic symbols that made up much of the shocking visual aesthetic for DOOM. It was dark, gruesome and I loved playing it in the dark with headphones at home.

Of course the series and then the FPS genre continued to evolve over time, and it became a much more competitive multiplayer experience. This is what Chris grew up on: frantically moving about the screen, never sitting still as he looked for that next bit of movement that would fire his quick twitch reflexes. He has never been much of one for actually trash talking over the headset when he is playing online – he is mostly just shooting the breeze with online friends. Me? Half the time I don’t even use a headset in multiplayer. There is definitely a generational gap there as I am the oldest person on our team here at CGR, and Chris is the youngest.

I explain all of this, because it helps to set the backdrop for each of us as we looked at and talked about the DOOM Open Beta. I admit that I came away a little disappointed that there were no snippets of whatever campaign mode the game will release with. I actually enjoy those quite a bit in a game – one of the reasons I was sorely disappointed with the most recent Star Wars Battlefront game. I will unfortunately have to hold off on those impressions until the actual game comes out and we get a chance to review it, but I did get to spend plenty of time with the multiplayer.


The multiplayer is best described by me as fluid. The graphics are sharp and smooth, with two different arenas and modes available in the beta. One was a traditional Death Match mode and the other was a sort of continually moving capture the checkpoint game. The two stages stand as stark contrasts with one another, with one as a fiery underground Hell-like stage and the other a more technologically advanced space station. It all looks good, but I am curious about the stages in context to the storyline. I can appreciate the flaming molten depths of a dangerous underground stage, but I am hopeful more of the stages reflect the sheer sense of horror that the classic DOOM games were capable of imparting. I still remember the shock value of the first impaled person I saw in the original DOOM games, and there was nothing quite like that in the two stages played here. I liked what I saw, but I did come away with the mild concern that for all of the things DOOM does well, it also might feel too much like a generic modern day shooter when it is all said and done.

One thing I did find interesting was how this game manages to blend some of the old school FPS systems in with modern ones. There is no sprint, but everyone moves at a pretty good clip. Power-ups are incredibly useful here, since your health does not naturally regenerate. This means scavenging for armor and health are vital for success. Speaking of scavenging, ammo also comes in somewhat short supply, so ammo crates are more important here than many other shooters. You can crouch, but you cannot go prone. You can fire down sights for increased accuracy and classics like grenades are still at your disposal. There was a solid throwback feeling to the Open Beta that I could appreciate as I am not a big fan of the high speed and parkour elements showing up in a lot of the more recent FPS titles.


On the other side of the fence was Chris, who regularly talked about the things that made DOOM feel more like a modern shooter than he had expected it to. He was initially skeptical when there was no sprint and two of the face buttons went unused with the default configuration. Chris quickly adopted a Call of Duty controller configuration over the default one. He noted the vertical nature of the two levels we got to play. He thought that the hack modules were awesome. A member of the team has an option to become a massively powerful revenant and roam the battlefield launching highly destructive rockets. Chris did not want to use frag grenades – he used the teleporter in fiendish ways I never considered (though it did get him killed a few times too, I noticed). Chris loved the brutal melee kills.

His overall impressions were actually even more favorable than mine when things were said and done and the dust settled on our playtime. He hit the max level of fifteen in an afternoon. In about the same span of time I hit level nine. Clearly between the two of us, he is the better at this game – but that holds true of most FPS and their online multiplayer. This is why our embedded gameplay footage is of him playing. It’s less embarrassing for me and he gets to show off.

Chris took note of how the weapons are actually quite different from one another. One of the default kits offers a rocket launcher. It is not the one-hit-kill overpowered kind of rocket launcher we see in Call of Duty games, but it has some nice splash damage that is great for crowd control. More traditional options like the shotgun were a favorite of his as well. Other weapons like the static gun (powers up while you walk around) and sniper rifle (powers up while you look down the scope, a clever way of mitigating the damage of quick scopers in other FPS titles) but a nice spin on traditional types of weapons. More variety would have been nice, but what was there was pretty interesting.


There were areas where Chris and I agreed to disagree as well. I thought the speed was fine as-is, he would have liked faster. I liked longer ranged weapons, he was in love with the shotgun. I preferred Team Deathmatch, he liked the Warpath mode. There were things we agreed on as well. Even with the armor customization options, the actual characters we play look a little generic. We both would have liked to have seen another map or two, because while both maps were well-designed and looked nice, it was hard to really come away with that unique DOOM flavor I remember and he had heard about.

The DOOM Open Beta did a nice job of introducing a couple of modes, some weapons, showing off the visuals and likely served as a good server stress test. To that end, it was quite successful. However, it left me with a lot of questions as well – questions that probably cannot be fully answered until we get our hands on the actual game when it releases in about a month. Both Chris and I are guardedly optimistic by what we saw, and we certainly want to see more – which is always a good sign. 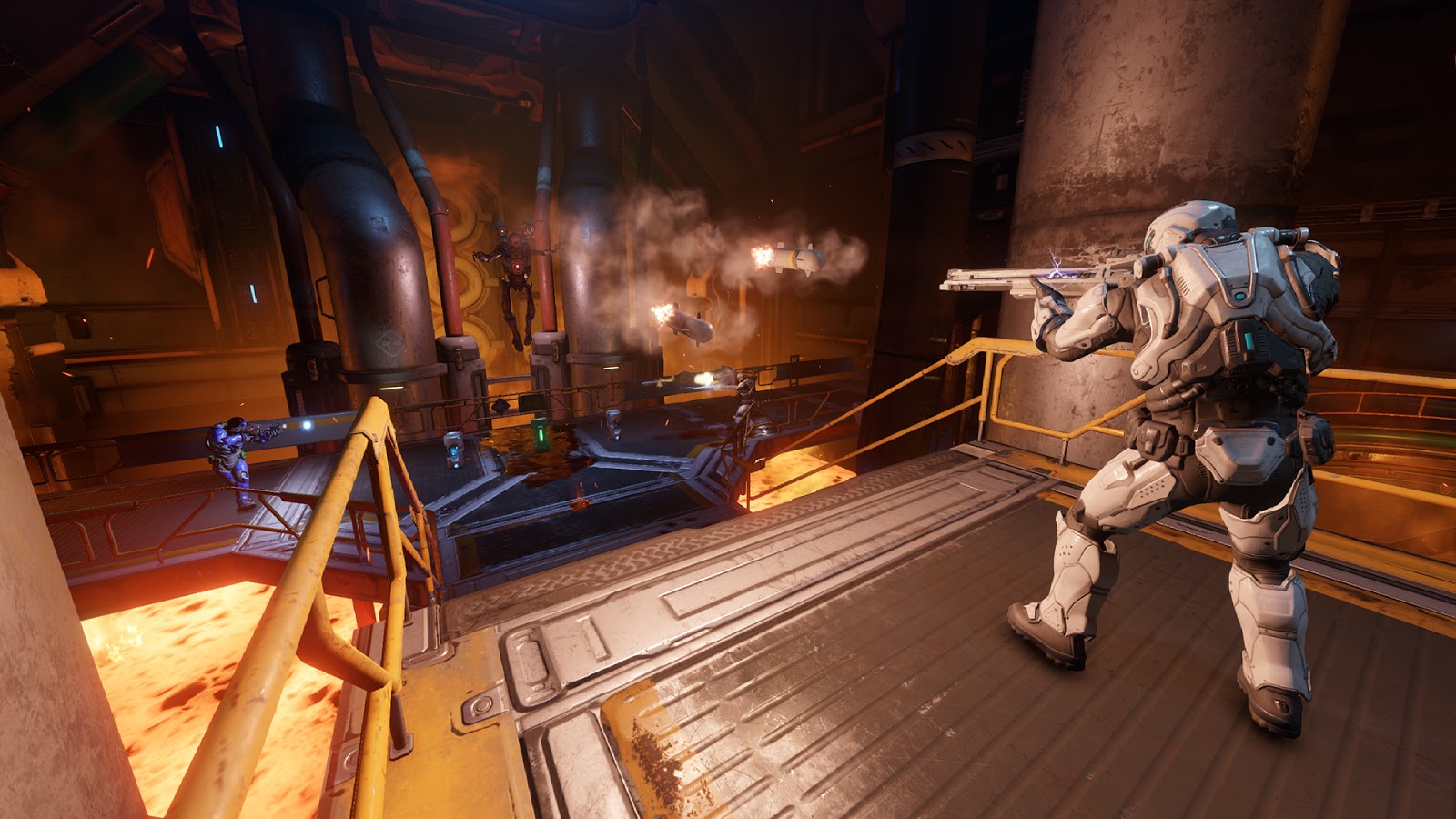