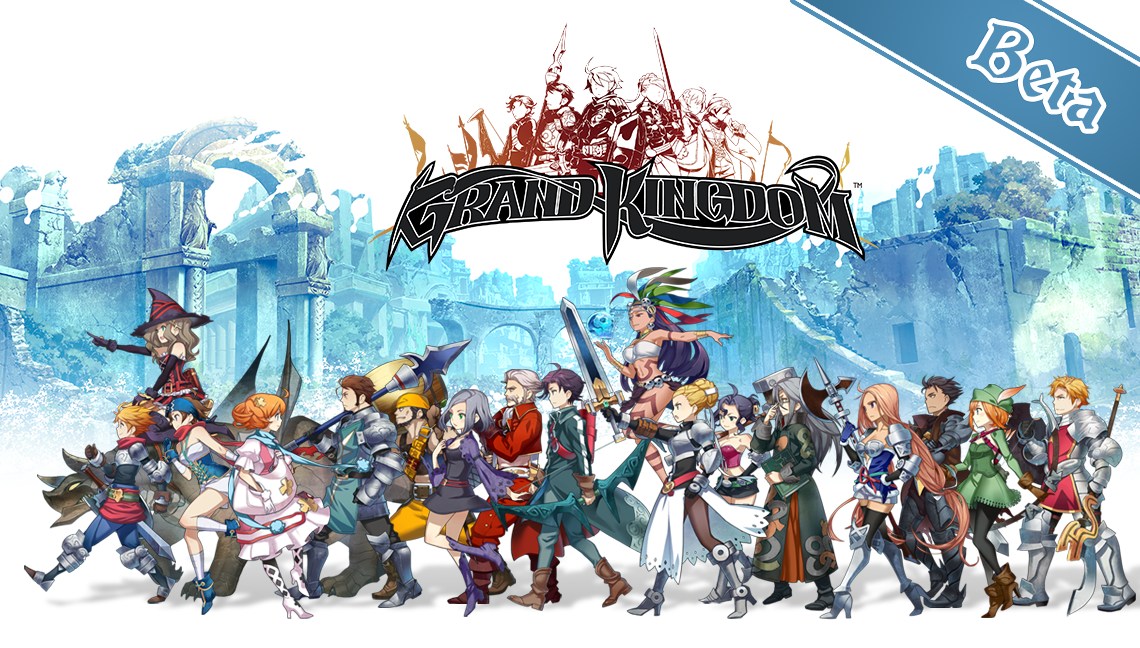 If Soul Nomad were to have a spiritual sequel Grand Kingdom would be it. With a slew of different classes and combat specialties, mercenary armies will move across the board in order to reign supreme for the faction of their choice once they’ve proven their mettle and been accepted into the guild. Launching in full on June 21, the beta ran for about two weeks having ended on May 10. Having played host to anyone who was lucky enough to get a key in order to join, there was pretty much one war every twenty four hours with plenty of opportunities to fight for your chosen leader.

I was hesitant at first at the idea of such an online-centric experience especially from amazing single player experience creators. Diving in from the main menu erased all of these worries as the first hour or two was spent on my own in single player doing the tutorial and a story mission all full with dialog and English voice acting. The online portion themselves did not open up until later and even when they did, they were “online” almost in the same way that Dark Souls is. You don’t need others in your face like a Call of Duty title or a World of Warcraft raid. This is a form of online that will put those with single player interests at ease as it doesn’t require constant online vigilance to not fall behind like Destiny.

As fast paced as it can appear, Grand Kingdom is a Turned Based Strategy RPG that uses three lanes for combat. Melee, Ranged, and Magic variants can all make up a squad’s composition. Mixing and matching will be key in the final version not only to find out what works well against what, but to find out what works well for you in order to hopefully lead your faction to victory. Without purchasing the digital version from the PSN, access was restricted to the four bases classes for a well balanced group of one short, one middle, and two long ranged characters. 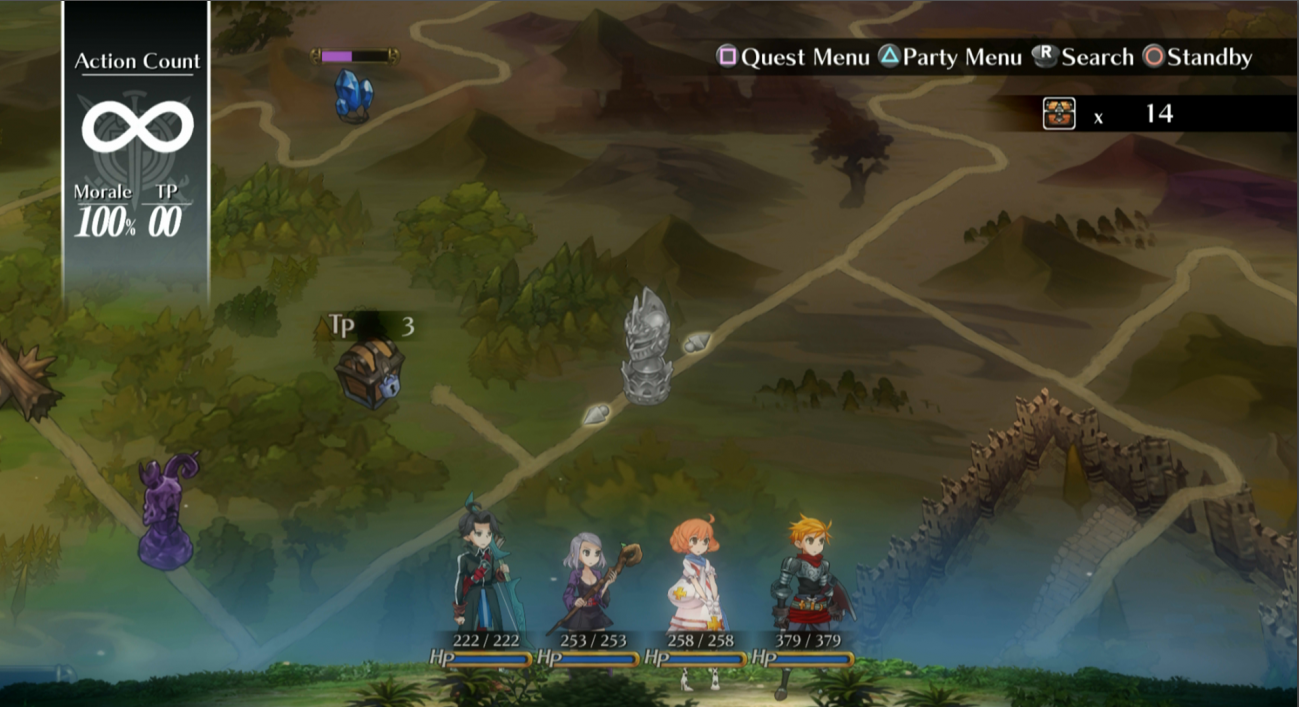 Playing out in turns, every character is able to act in an initiative order. Prior to taking their action characters can move as much as their movement gauge will allow. Moving characters is easy as all that is needed is to hold left or right and move them as far as needed. Jumping between the top, middle, and bottom lanes is just as simple by selecting up or down. If for example a melee character needs to move in close, they can move towards the enemy and for maximum damage drop down or jump up a lane in order to attack behind. If a mistake was made or you simply want to try something else in order to keep more space between your character and the enemy a redo is available for as many times as you need it. Once an action has been started it becomes important to throw as many punches in as possible as there is now no way back.

Keeping an eye on the turn counter is important especially in single player as there is a timer for how many turns remain in order to meet the objective. Taking two to three turns for combat means two or three turns less in order to reach your goal. It may not seem like much in the beginning, but each movement on the combat map takes up a turn it can add up when going out of the way in order to grab treasure chests and getting into hidden encounters that were not in the original plan. This is changed up in multiplayer which will be discussed lower.

Moving into combat, sword slices, magical fire attacks, acid or poison vials, and arrow barrages are just the beginning. As characters level up they gain new abilities to help control the field. Setting up fire and poison traps for your enemies to walk through adds another layer to the combat as it can restrict movement and cause multiple recalculations to your battle plan. These are just the traps or obstacles that can be seen.

With other traps that can be set up prior to combat on the map, such as spear traps that can be triggered while running a top of them and remain invisible until triggered, sometimes it is what remains unseen that is more worrisome. Thankfully as much as they hurt you if the enemy is standing close it hurts them as well as a spike out of the ground doesn’t care who’s side you’re on. More than just traps though, obstacles such as high walls to protect from arrow barrages are also possible to put into place before stepping onto the battlefield. Checking out what is available from merchants for defensive measures is a good idea while stocking up on health items.

As with any leader driven affair, taking them out should be the first order of business. Taking out the leader will remove the bonuses that the rest of the troops gain making it much easier to eliminate those remaining from play. The same however can be said for losing yours. Consideration of moving your leader into the fray early if they are a melee type or promoting one of your longer ranged allies is a choice that only you can make. Having opted to keep my melee character my leader lead to some hard won victories from having lost my leader early due to new abilities that I had not yet seen. Whoops came to mind more than once.

What caused some frustration was also an amazing move on the development team’s part. Throwing objects or launching spells should be done with a colossal amount of care unless you really don’t mind pelting your own forces with acid vials and fire attacks. The arc that a vial from a medic can fly is important to look at as if she is standing too close to an ally, the ally is the one who is going to receive the damage. The same principle applies to arrows, spells, and sword swings. Standing too close to an enemy can result is friendly fire which not only results in “whoops” but also a groan especially if “attack” was selected instead of “cancel”. There were a lot of those moments. 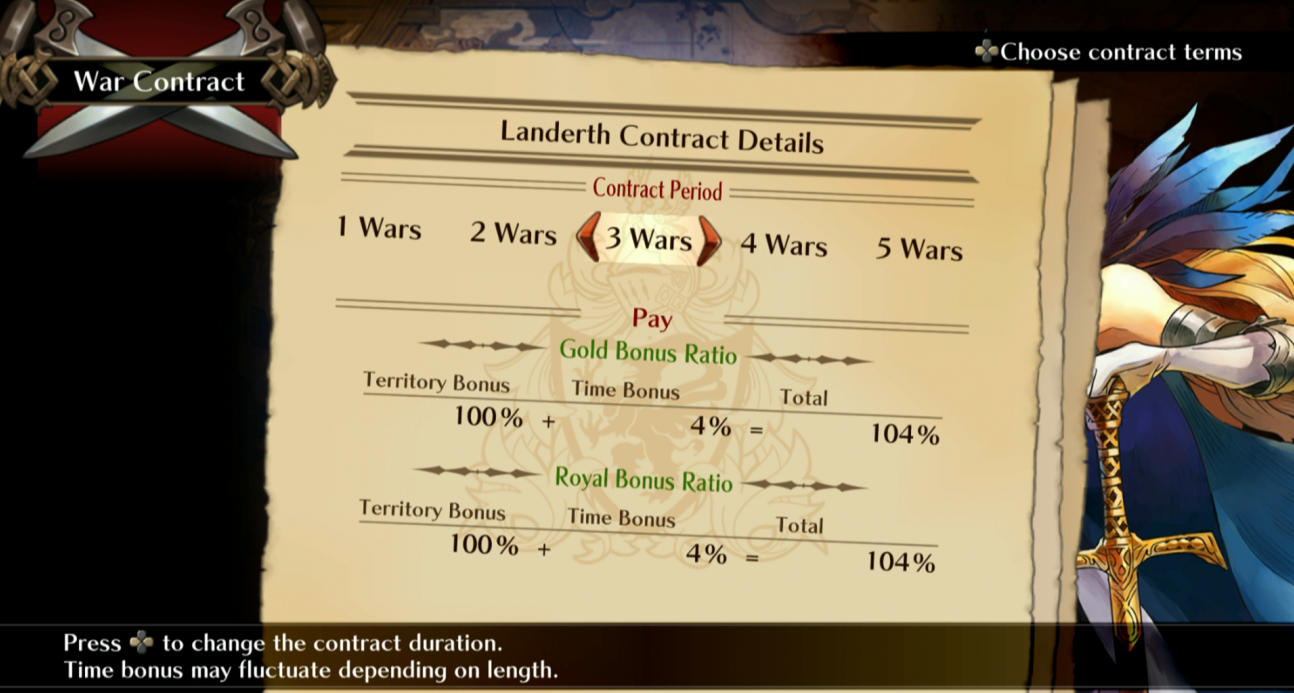 On the subject of awesome touches, assists can be performed by team members in order to deliver that final coup de gras. Assists become more common as the camaraderie deepens among your squad members. These come in very useful when there was nothing more than a single hit remaining. Rarer at first, these soon become commonplace and with everything else, if you can do it, so can the enemy. Following up on assists were final blows which were even more rare. Hitting an enemy and having an assist from an ally could sometimes just miss taking out the enemy. In these cases it was possible for the original character to finish the job themselves. Having these moves stack together was simply awesome as it could prevent an enemy from unleashing hell and sometimes even winning the battle in one fell swoop.

Unlike in single player where moving across the map requires turns, multiplayer is all about the timer and which faction can cause the most amount of damage to the other. While combat remains the same and works in the form of turns, the map is all in real time with forces moving across in order to defend or attack each faction’s forts. Destruction of the forts and of your enemies is what this mode is all about.

There are two styles of play that can be done in regards to multiplayer. The first is the hands on approach that lets you lead them to victory or personally face defeat. With wars being twenty-four hours, there are plenty of smaller skirmishes that your squad can join in on. The first night however I found that there was nothing that I could do as a cease fire was in place essentially reducing anything I could do to nothing as the quest mode in single player was not available for me. In the full version this just means that a bit of single player will be required until the next war starts up, or, players can choose to send their squad out on their own with instructions as to handle themselves. 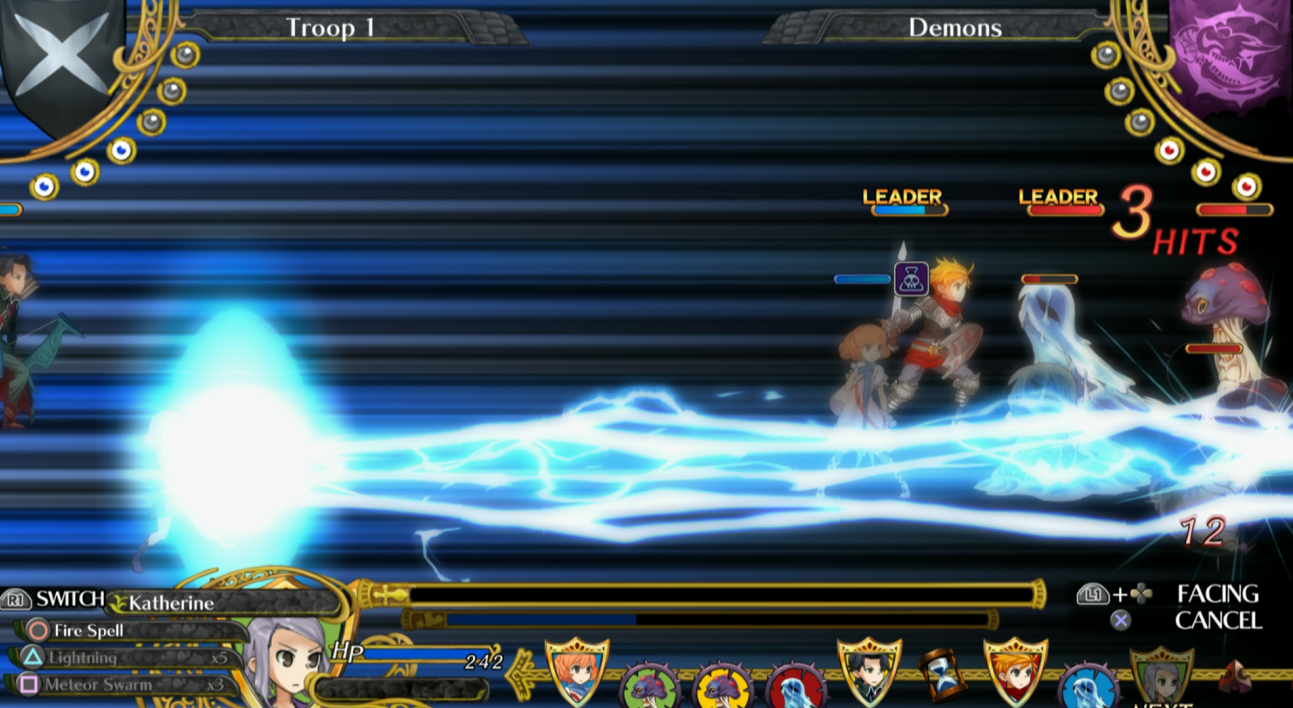 Sending a squad out on their own is a great idea especially when calling it quits for the night. While out on their own, squads can participate in battles and even have members get hired and bring you back money the next time you load it up. The concept of being hired comes across in the squad’s fifth and sixth open positions when you yourself take control. These two slots can be filled by an outside party only if the player chooses to. The higher the level of the mercenary the higher the cost to bring them in.

Once hired, the player whose squad member was drafted into the party for the duration of play is immediately transferred the amount. This makes leaving a squad out to gain more money and experience while you are not there much easier. While it may not be as much as you yourself can gain, every little bit helps especially as the average level of characters being faced in battle increased bit by bit every day. Level 4s became 5 or 6, and then 7, 8, or 9. It was mentioned that constant online vigilance was not required and I don’t think it will be as there is always the single player component for those not even interested in joining in online with everyone else. By why wouldn’t you? 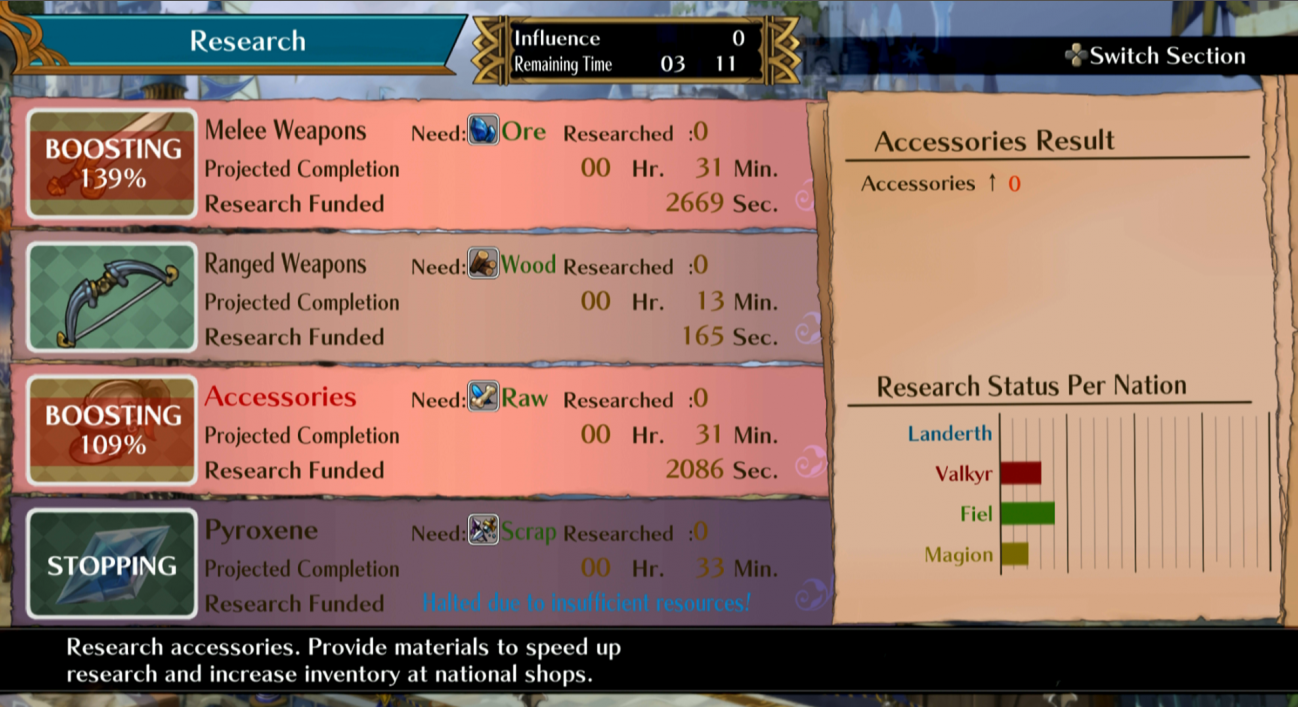 With how well everything was presented from the tutorial onward through the story mission, I felt absolutely lost when thrown into the multiplayer section. Starting up everything was well presented one feature at a time in order to properly grasp each concept. Into multiplayer however there were multiple walls of text available but aside from that it was pretty much a “figure it out”. It’s not to say that it isn’t possible but it was the lack of guidance that made it a bit harder to understand. In the end everything can be figured out by trial and error alongside the small tips that come up.

Having spent hours controlling my mercenaries before letting them loose to do their own thing while I did mine, Grand Kingdom is already shaping up to be something great. With a total of 17 classes each with their own specialties, June 21 can’t come around fast enough. Hopefully the portable version on the Vita will be running just as smooth as the PS4 version when it launches for those that would prefer taking it on the road or simply preferring the smaller form factor.