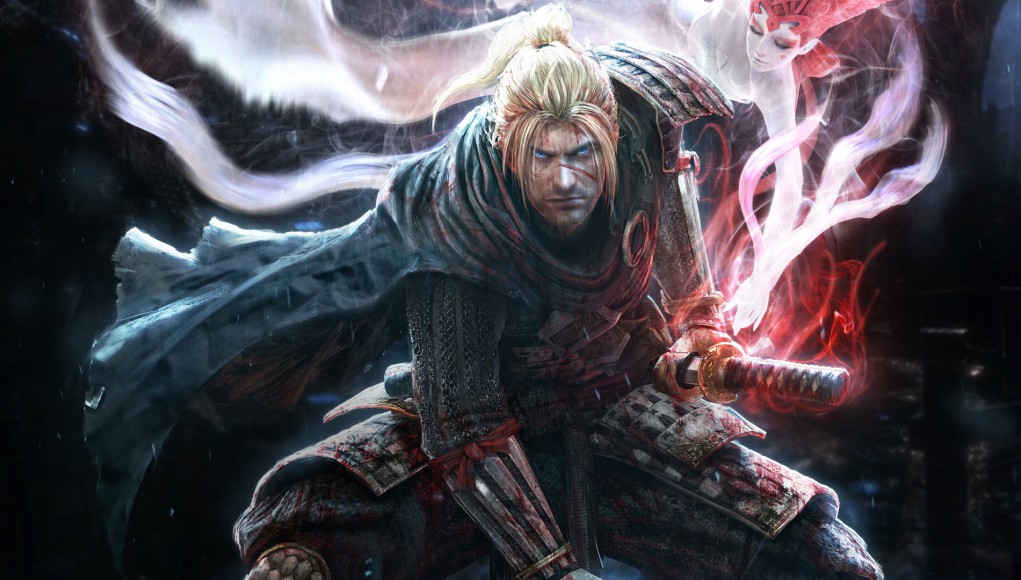 FREED FROM THIS MORTAL COIL. Pretty much you have died. Again and again. And again. Alright I’m not the greatest at these but I’ve got tenacity and keep going back for more until I can finally run things smoothly enough. Nioh, like Lords of the Fallen, takes the idea that makes From Software’s Souls Series tick and makes it into something of its own. Running parallel in style only, Team Ninja / Tecmo Koei’s newest project holds plenty of promise to come if things keep up with what this alpha demo provided.

Disembarking from a boat on a shore line we find ourselves with nothing but the clothes on our back. Finding a sword not long after, we come across the first of several people that are not happy to see us. Moving on from this encounter into the next and it becomes quickly clear that dying is going to be second nature. This was made quite clear as a man holding an axe made me one with the ground as I missed my dodge. Respawning at the last shrine visited which is tended by cute little demons called Kodama, it was time to do it all over again.

This is where the similarity with the Souls series disappears as even dying isn’t the same. Equipped with a guardian spirit that when fully “charged” up made me think of a Warrior’s styled Musou attack, this spirit stands back once you die in order to keep a hold on everything you lost. Dying a second time will lose everything that was being held by the spirit as well as everything that you were currently holding as the spirit being was not there to hold onto it. This makes dying twice in a row before getting back to this spirit a harsh lesson to learn. Making things just a bit more challenging would be that while the spirit is awaiting your return, that musou styled attack cannot be used either. 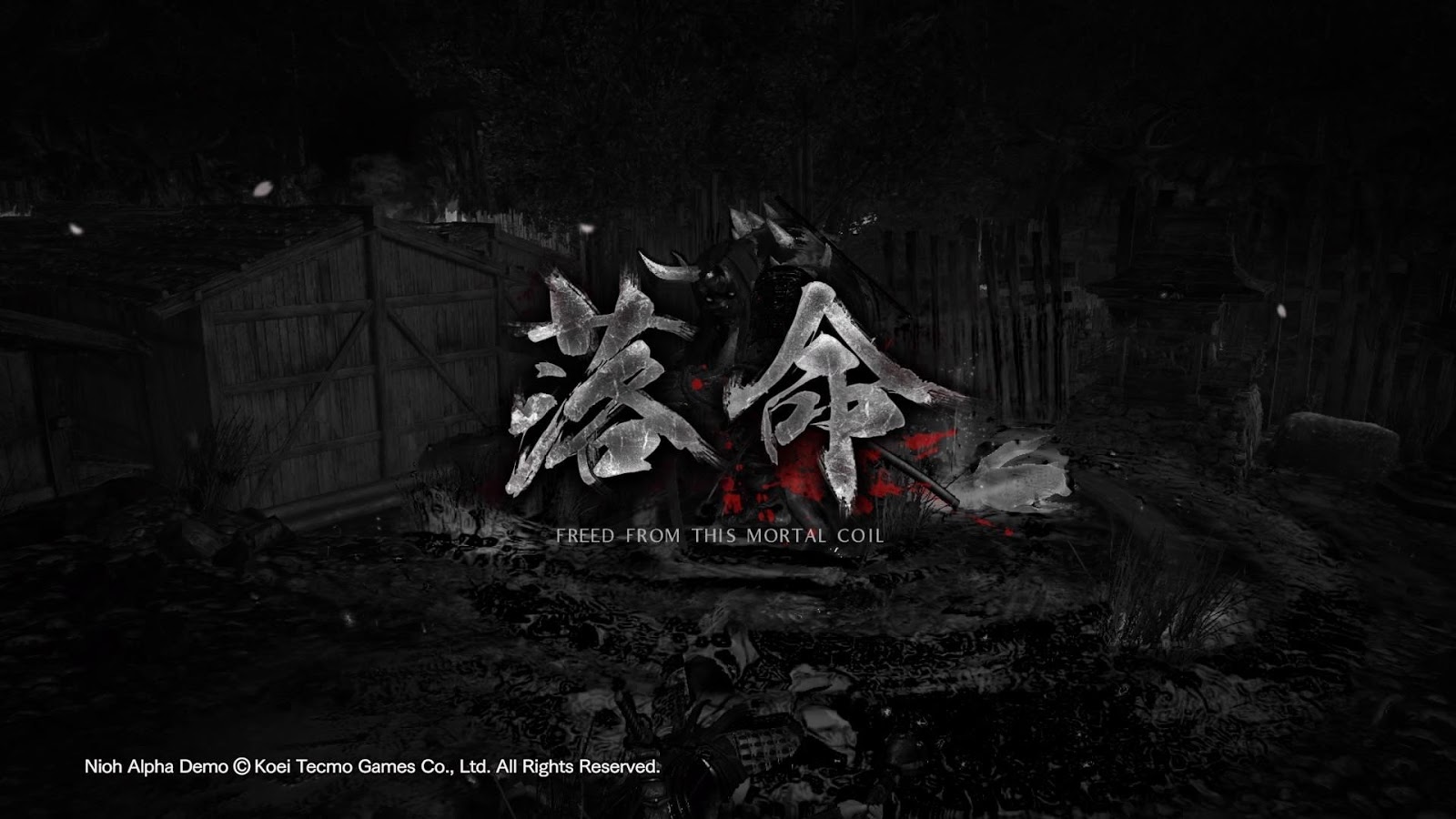 Gameplay spices things up with several weapons adding various gameplay styles before even considering that there are three different stances that can be held. High, low, and medium stances are available for every weapon which each take different amounts of stamina and swing at different speeds and angles. Enemies have the same options available to them and certain stances felt as if they fared better than others. Learning which stances do what was important not because of the amount of damage that they could do, but instead for how they played out allowing you to find your own style. Personally the Mid Stance with a Katana and the High Stance with a Hammer (not an axe which is the tree it falls under) were my preferred play style if I couldn’t take them out with a bow before they got to me which is where another awesome change comes in. Headshots are a thing.

Taking the time in order to properly line up a shot could change an arduous encounter into none at all. Like in First Person Shooters, and real life if we can be serious for a second, a shot to the head can end it all. Aiming the arrow even from a fair distance away can end an enemy’s life easily enough. It didn’t cause a stun, but flat out did more than enough damage to take them out. Trying this on a helmeted foe however if properly hit will send the helmet flying which was a very nice touch. Otherwise they are just pissed off and will come charging at you.

Once an enemy is in your face there are two choices. Dodge or block. While both blocking and dodging take a portion of your stamina, blocking takes more and leaves you open to follow up attacks if your defensive capabilities are not high enough. Wearing heavy enough armor and holding a hammer there were times where the stamina bar would simply nod an acknowledgement to the blow that it had just received. Other times the health bar would scream at the hit it took as the defense score was not high enough to even worry about having the stamina to block it. That or it shouldn’t have happened. I honestly don’t know at this point as this was an Alpha 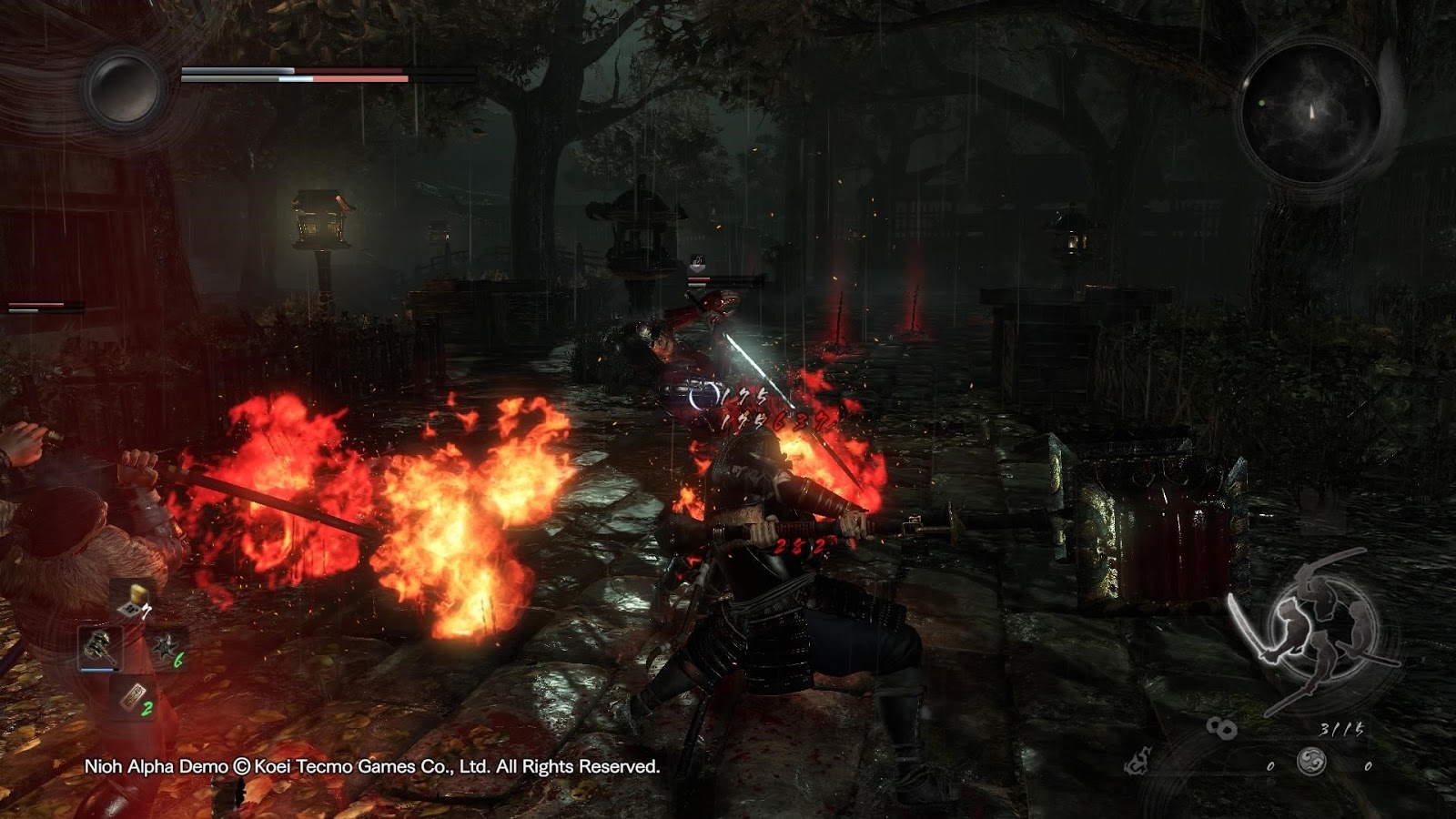 In regards to dodging, how well William (name of character) could move depended entirely on how much weight he was carrying. Head, chest, legs, hands, feet, and the two slots for weapons all carry their own weight and attributed to how well he could move. Early on this could put a bit of a damper on those that love wearing heavier armor but still appreciate properly dodge rolling. Basically how I play. After gaining a few levels however, which can be done by giving Armrita through the level up menu at the Kodama shrine, more weight may be carried making this much easier to do.

The Kodama Shrine allows more than leveling up and acting as a respawn point. It also allows to make offerings by selling unwanted equipment, change the guardian spirit that is being used, summon a visitor (coop), and once more Kodama have been found it allows to change the blessing that is in use. Blessings modify the drop rate of Amrita, money, weapons, healing items, and then arrows. Finding these little guys is well worth it especially if better equipment is wanted or needed as for right now, equipment could only break while weapons could be repaired with whetstones. As money was of no use in the demo it leads me to believe, could be VERY wrong so don’t quote me, that there could be a blacksmith that would allow for equipment to be repaired for a cost.

Weapon durability unlike having recently played and just finished Dark Souls 3, does not repair itself when resting at a Shrine. Instead they could only be repaired with Whetstones and that was IF they could be found. In my first attempt I found but one and had to constantly use a new weapon but even those were in short supply. Scrapping it all and starting again things went much smoother allowing me to have a cache of spares that came in a variety of different rarities with their own bonuses that could be useful for different situations. Having gone in the manner of MMO loot, items not only come in various colors of increasing rarity, but they in a way felt a bit in the category of easy come easy go unlike the others in the style where one weapon could very well serve until the end of the game. 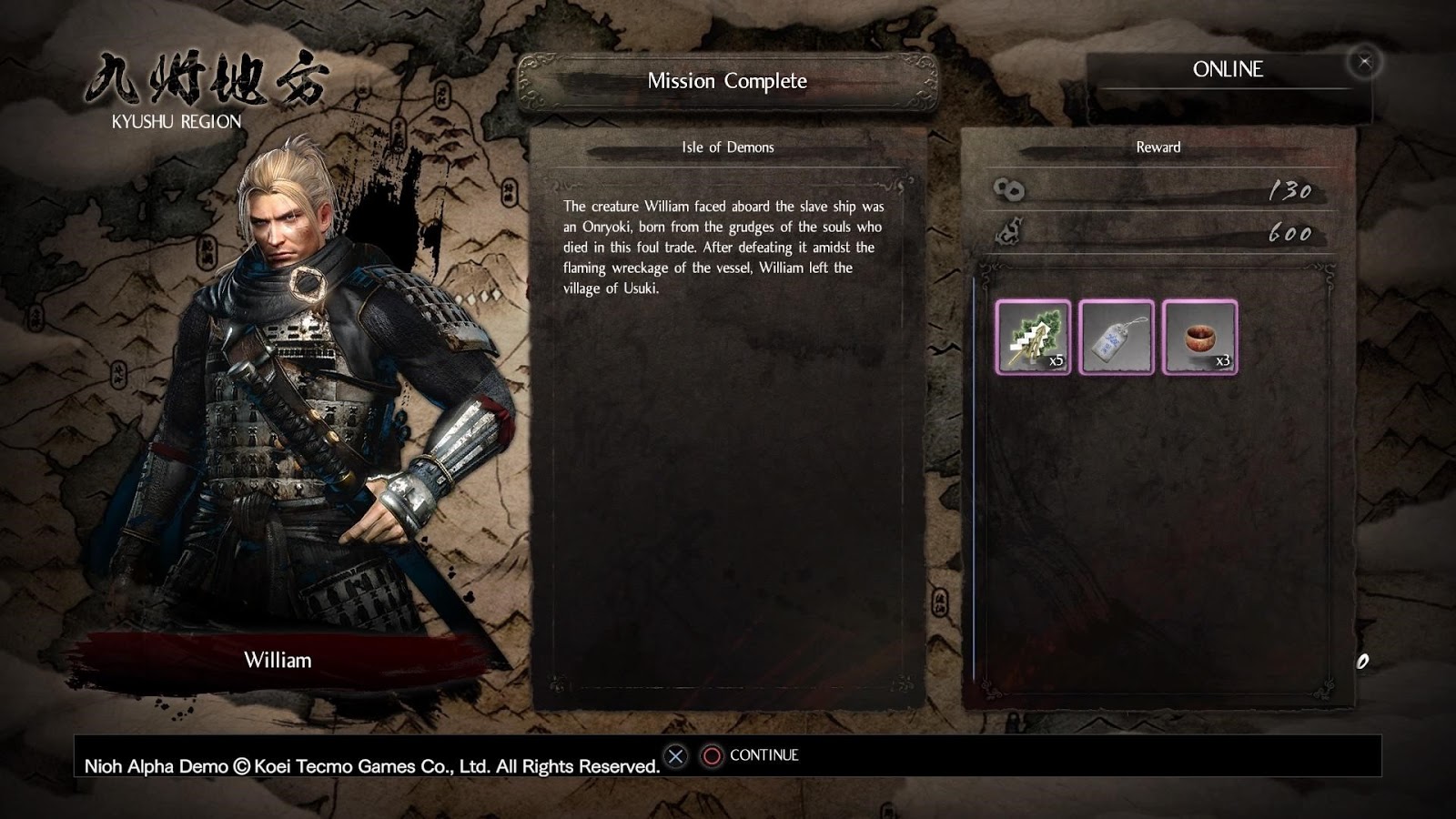 With all of the weapons and the leveling however, there is still more to Nioh that simply leveling up William and letting his foes have it. For every level that William gains through Amrita, skill points are given for the skill tree category that they fall under. Weapon skills, Ninjutsu, and Onmyo points can be gained and used to learn abilities for battle. Ninjutsus for example can arm William with Shurikens that replenish every time a shrine is visited. With these constantly restocked projectiles also comes the ability to reduce the Ki (stamina) that is consumed while dashing or dodge rolling. Onmyo grants the use of more magical abilities such as talismans that grant a weapon fire, water, earth, wind, lightning, and sloth damage to be used. Sloth damage reduces an enemy’s speed. I had to read that one the first time.

Overall the Alpha Demo for Nioh was awesome. Interestingly though it was short lived not in regards to the time it took as I made sure to explore everywhere and learn a lot about how things worked, but more because it was only available until the 5th of May. Anyone who completed the demo received The Mark of the Conqueror DLC for the full version once it releases. What was interesting about getting the DLC isn’t that I had completed the Demo per say and have it, but that there was more content thereafter in another area that could be explored offering a bit more before the clock struck midnight on the final day. Knowing the level of potential that Nioh holds has me very excited for hopefully either a Beta to show more, or the final release once it’s ready. 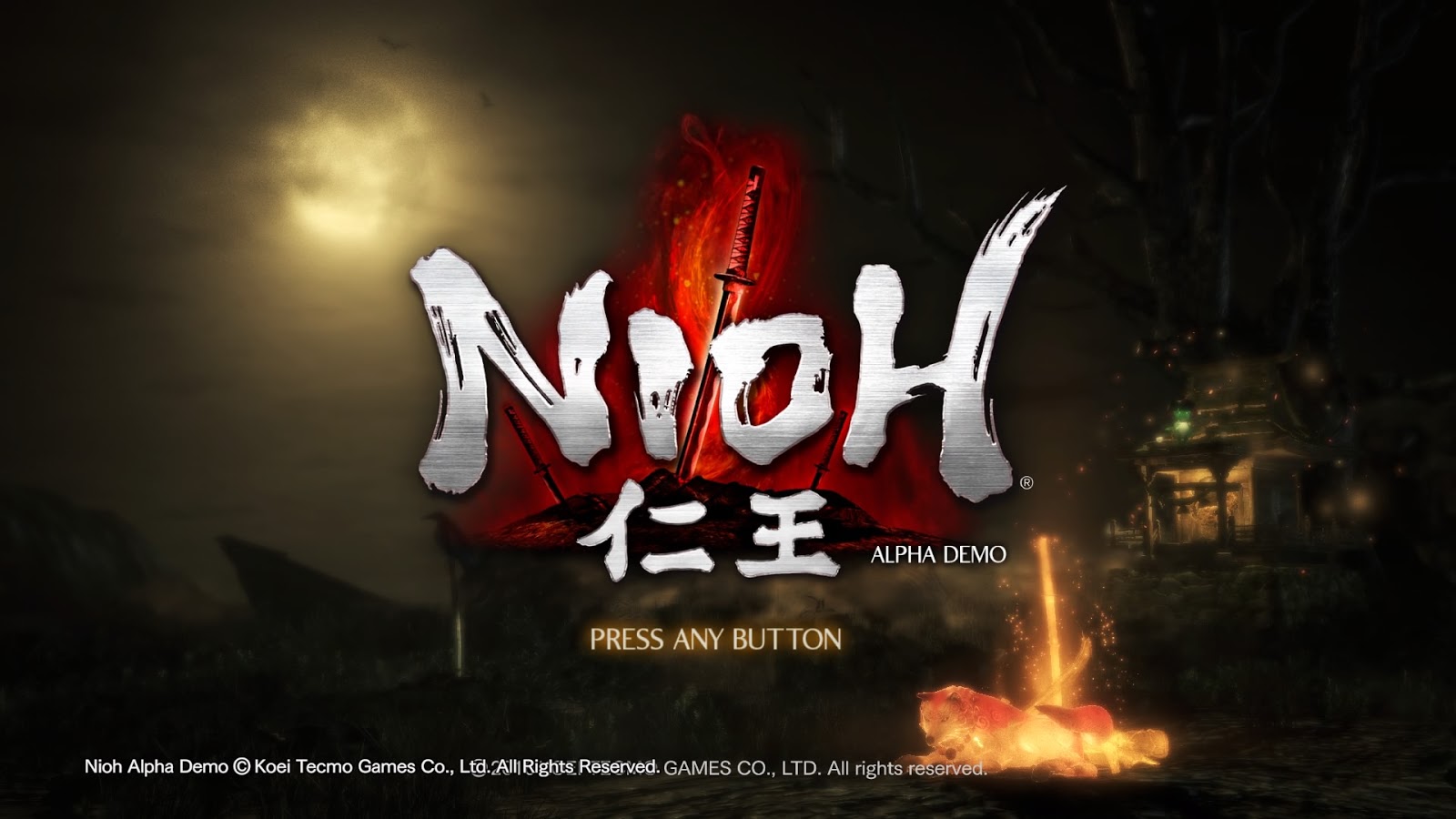