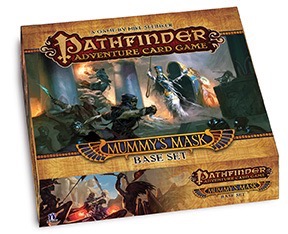 Pathfinder usually evokes thoughts of pen and paper tabletop RPG action, but they have plenty of other interesting products as well, and their card games are among the better ones.

Heroes will brave terrible guardians, foul cults, and the burning sands of the desert to stop the rebirth of an ancient tyrant in this cooperative strategy game that pits one to four players against the monsters, curses, and traps of the Mummy’s Mask Adventure Path from the Pathfinder Roleplaying Game. Players will choose their character’s class, build a deck of equipment, magic, and allies, and explore dangerous locations as they journey through an exciting fantasy tale.

Pathfinder Adventure Card Game: Mummy’s Mask Base Set will release worldwide on October 2016, but is available now for pre-order on paizo.com (MSRP $59.99).

About Paizo Inc.
Paizo Inc. is publisher of the award-winning Pathfinder Roleplaying Game, Pathfinder Adventure Card Game, Pathfinder Tales novels, as well as board games and accessories. The Pathfinder world, in which players take on the role of brave adventurers fighting to survive in a world beset by magic and evil, is currently translated into eight languages, and has been licensed for comic book series, graphic novels, toys, and apparel, and is being developed into an MMORPG. Paizo.com is also a leading online hobby retail store, offering tens of thousands of products from a variety of publishers to customers all over the world.