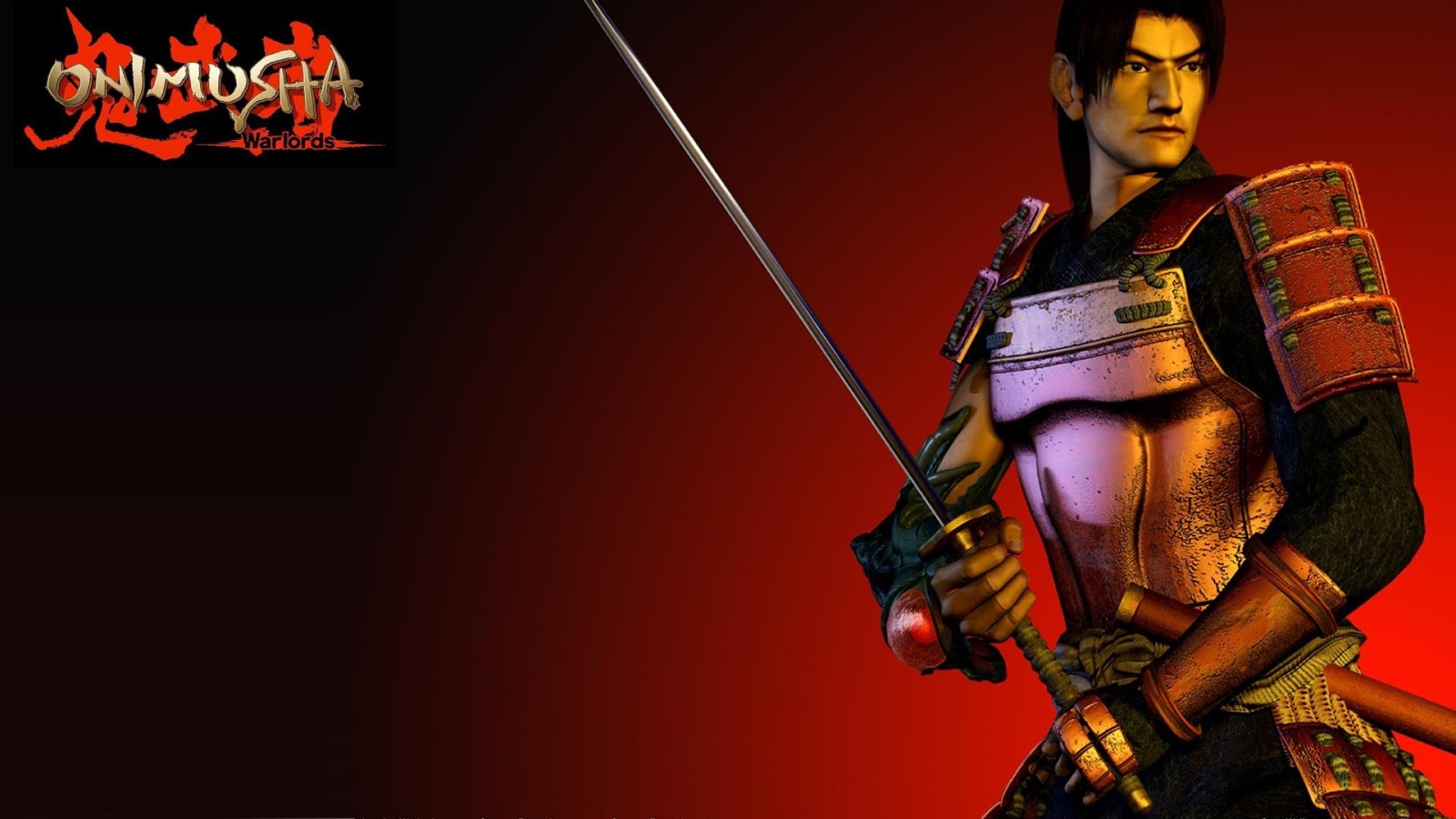 I finished Onimusha many years ago and I remembered it as a fine PS2 game. Since I tend to choose games which have mechanics I am already familiar with I decided to give it another try. After all, it is one of Capcom’s famous productions.

Story: In feudal Japan, a keep is overrun by an army of demons, who kidnap a princess and intend to sacrifice her as part of a pact with a resurrected evil warlord. Samanosuke, a brave swordsman equipped with a magical gauntlet, rushes to save her, accompanied by Kaede, a loyal female ninja. Unfortunately, the story lacks originality, the plot is thin and the ending leaves serious issues unresolved. Journals are scattered around the keep but their information is repeated. At least, the words of the dead, which you hear if you have the appropriate item, are well written.

Combat/Monsters: You play mainly as Samanosuke but the game asks you to control Kaede too. Entering an area results in monsters appearing from thin air. If you kill them more appear. Do that for a while and the area is cleared, temporarily. When you leave and return the same thing happens again. Regular demons don’t pose much of a threat, except for ninjas who throw projectiles. The big ones, such as minotaurs with huge axes, are more dangerous. Bosses are tough and you should face them with full magical energy. 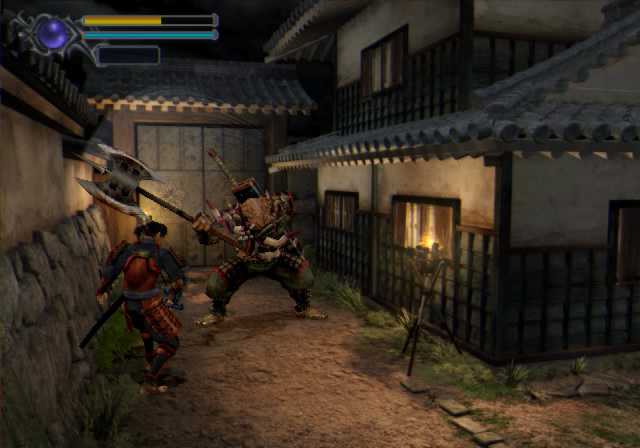 Souls: Slain monsters leave souls behind, which float for a few seconds before they vanish. If you keep the “circle” button pressed your magical gauntlet absorbs them. Red souls are for upgrading items and equipment, blue ones refill magical energy and yellow souls replenish health (kill enemies with a single blow to get more of them). Thanks to upgrading, weapons deal more damage, orbs unlock magical seals of higher level, arrows, bullets and herbs become more powerful.

Weapons: Samanosuke can carry three magical melee weapons, a bow and a rifle, called matchlock. Each weapon has one combo (there is only one button for attacking) and a magical attack, that is unblockable, deals lots of damage, knocks down non-boss enemies and renders you invincible while it lasts. However, you can unleash only two or three magical attacks with one full mana bar. The bow and matchlock have limited ammo so you should use them carefully, e.g. against bosses, in the dark realm or to protect soldiers from archers. There is also a super sword hidden before the final boss.

Level design/puzzles: The action takes place in a limited area, nevertheless there is a variety of locations linked together: for example, I crossed a cave, used a ladder and climbed up a well, finding myself in a room I had explored before. Kaede may enter areas inaccessible to Samanosuke, adding depth to the adventure. Puzzles usually require finding an item and applying it at the right spot, e.g. placing a decorative arrow on the hands of a dragon statue. The hardest puzzle is the water cage, which had me cursing for years until I realized I was doing it completely wrong! 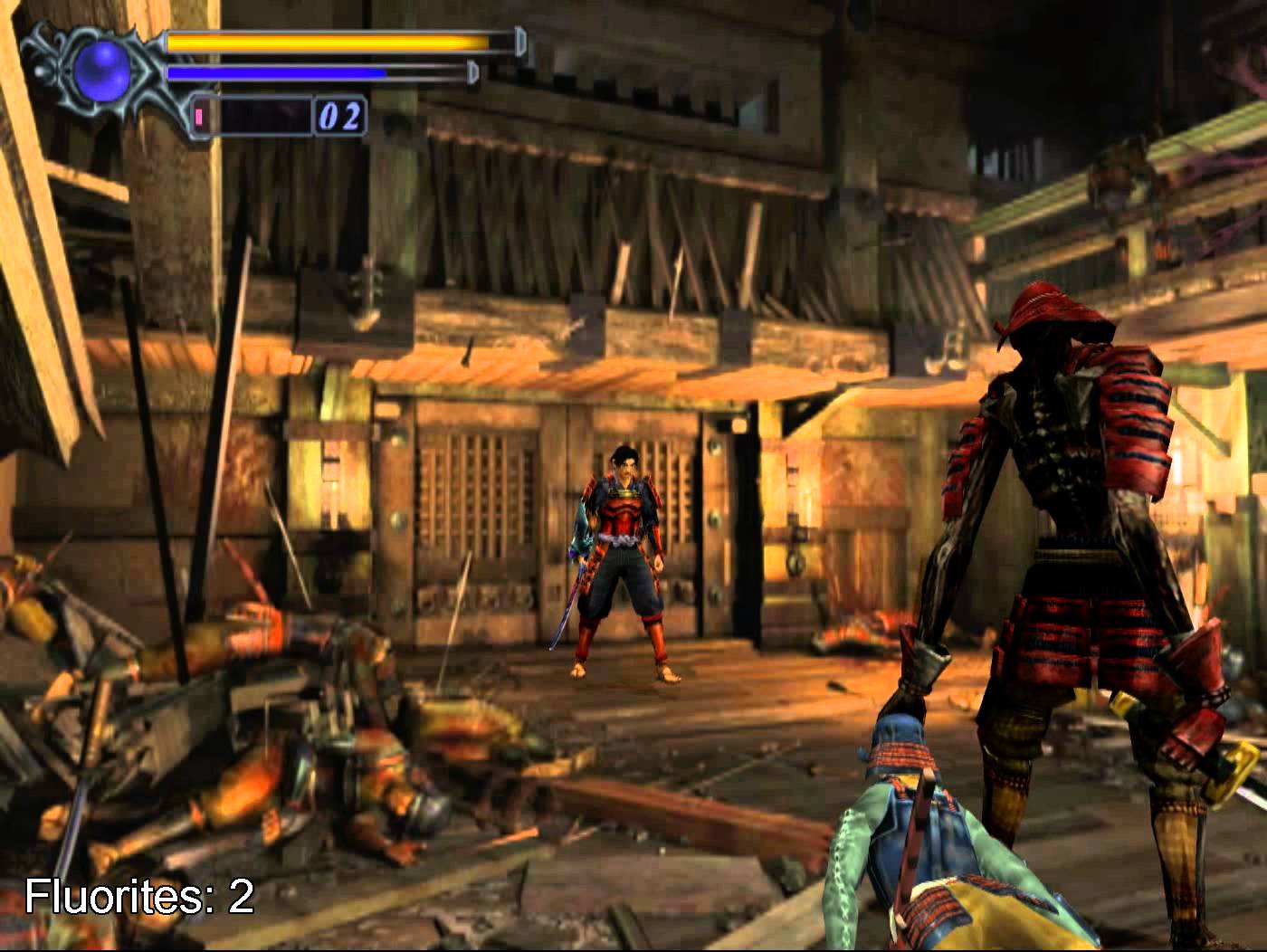 Movement: Strangely, to move you use the directional button instead of the left analogue stick. Left/right are for turning anti-clockwise or clockwise while up/down are for running to the direction you are looking at or stepping backwards. So, “up” is not always up in the screen. To compensate for the lack of flexibility and speed, the programmers have implemented a “turn 180 degrees” button and an automatic aiming and blocking mechanic: even if a monster materializes behind you, pressing the “square” or L1 button will make Samanosuke turn and attack or block immediately.

Inventory: The inventory has pages for items, files (such as books with information used to open chests) and maps. It also allows you to see the current level of your weapons and orbs. To equip a different weapon, for example a bow, you must open the inventory, select the bow, select the ammo and exit the inventory. It would be much better to assign weapons to the directional button but, as I said, it is used for running. Don’t forget, to equip the golden armor, found in the room with the levers, press ”x” after highlighting the normal armor.

Graphics/Sound: Onimusha is a technical masterpiece despite being old. The 2d scenery is detailed and colorful and every place, even a dungeon or storage room, looks interesting. The use of light is excellent and the camera conveys a cinematic atmosphere. Some places, such as the secluded waterfall or the eerie garden, are hard to forget. Samanosuke and Kaede move like real persons and their facial expressions are convincing. Monsters have different attack patterns and the bosses are impressive.
The music has an oriental quality and becomes either intense or more relaxing, creating an immersive experience. 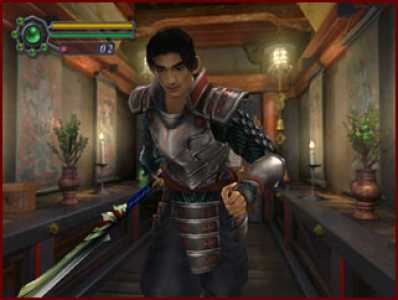 Difficulty: The game is very short and it took me about four hours to complete. It is not hard either because yellow souls often appear when the hero has been seriously injured. The Dark Realm, where you fight successive waves of monsters in a confined space, is not hard provided you are well equipped and use some tactics. Playing with Kaede is a completely different task though: her weapon is weaker, has shorter range and doesn’t have magical attacks. Moreover, she cannot absorb souls and the only way to replenish her health is to consume herbs and medicines, which are limited.

Reminds me of: I think Onimusha shares several similarities with Van Helsing; they both take place in a secluded area where demons slaughter innocent people, the hero is helped by a brave, beautiful woman and an evil entity is about to fulfill a master plan that will bathe the country in blood. They showcase amazing 2d graphics and you cannot control the camera. Lastly, they apply an automatic aiming mechanic for combat which makes it unnecessary for the player to become very skilled and motivates him to fight from one spot only.

Epilogue: Onimusha was a mixed experience for me. The magical weapons and infinite monsters made me want to play it as a hack and slash game. The slow pacing, cumbersome control system and puzzle solving made me want to treat it as an action/adventure. That’s why I liked Kaede more: she is much weaker than Samanosuke, so I had to avoid unnecessary battles and consult my map regularly to decide my next destination. I found her to be better integrated in the game design and I wish she had a bigger participation in the adventure. Even my most memorable scene is with her, when she reaches a river shore and stares at the other side, at a tower where Samanosuke is about to fight a monstrous hybrid. Onimusha still has some of the highest production values on PS2, though, and fans of the genre should definitely see it. 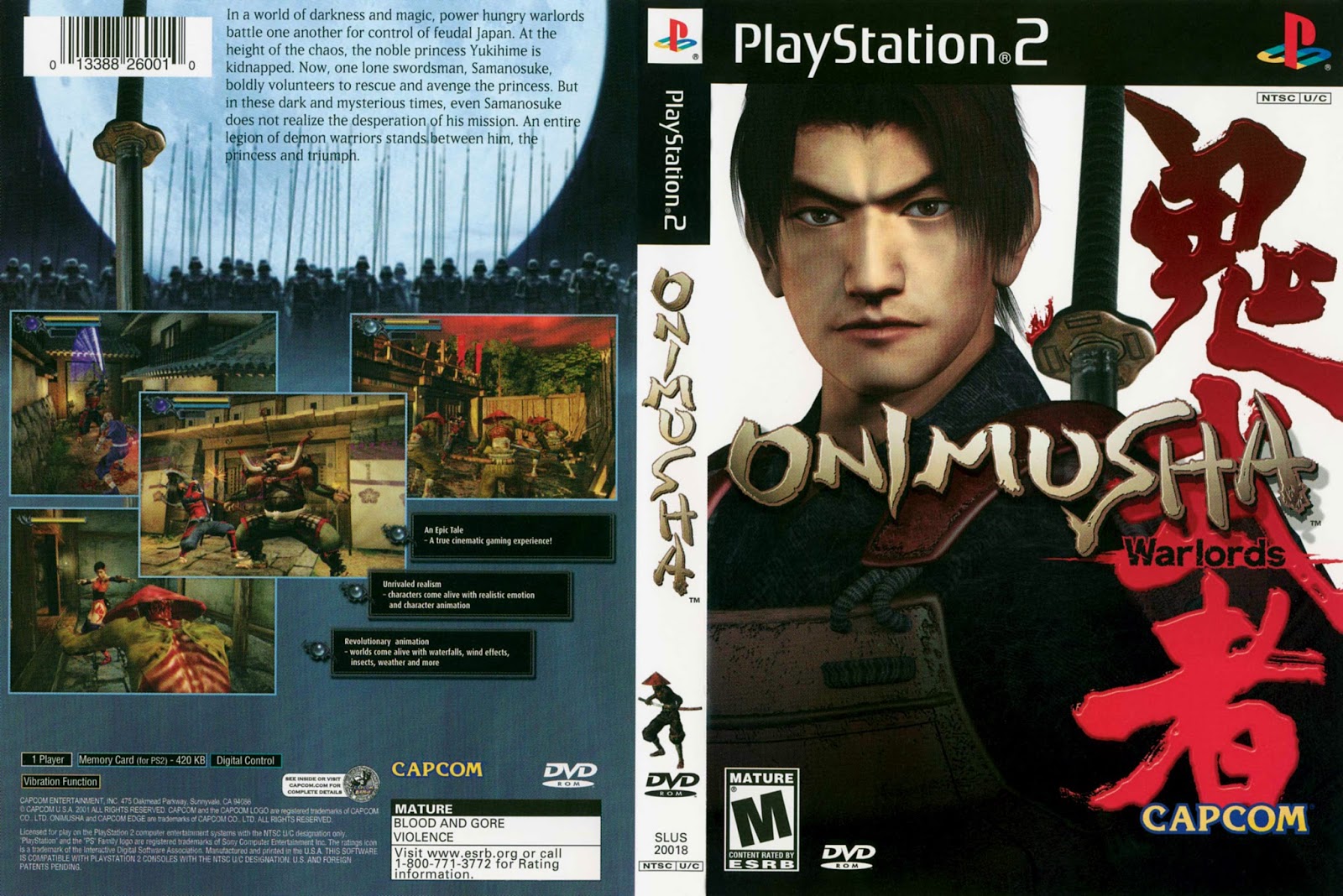