comments Share
You are reading
Memorable Music in Gaming #27 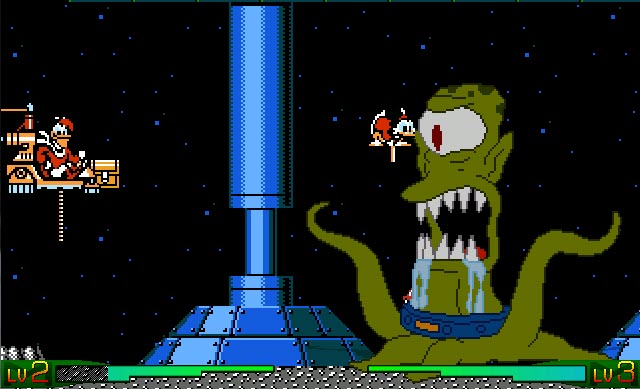 We haven’t had a lot of music articles of late, so we thought we would make it up with a really nice mix of songs from five different platforms. Some are about as classic as consoles get (NES anyone?) while another is from last generation.

Considered by a-great many to be the finest video game chiptune music ever composed, The Moon is also the greatest music associated with the DuckTales name – beside the cartoon intro song, of course. Brimming with child-like excitement and jubilant energy, one cannot help but visualize glittering gold, sparkling stars, and a barrage of fireworks with all the colors of the world. Truly a masterpiece!

Secret of Mana (SNES) – Fear of the Heavens

Atmospheric and wistful, Fear of the Heavens should satisfy your space, endless drifter needs.

Brutal. Scary. Ominous. This theme escaped from the deepest pit of hell, the corroding chains dangling off of its back, the scars carved deep into its body like a failed sculpture. Filled with unrelenting anger, it prowls the night looking for abandoned souls to feast upon, hellbent on exacting vengeance. The more it satisfies its hunger the more violently powerful it becomes – until it becomes so powerful it ultimately consumes the cosmic.

And the funny thing is, Destruction Derby 2 is a racing game.

A well-done repeated electric guitar riff can really elevate the orgasmic (or should I say, eargasmic) quality of the music when executed correctly. Con Air’s main theme does this; and so does Primal Eyes. I’ve said this all over my previous entries in the MM series that The 3rd Birthday’s OST is stuptifyingly good – much more so than the game deserved (which is just as good, trust me). I absolutely love the loud-soft, borderline passive-aggressive dynamic of the OST. If one theme is soft then it’s guaranteed that the next will be so loud it will literally bounce off your walls. Loud music in itself is no fun to listen – especially when the arrangement has no clue as to where it’s heading, and indeed, where it’s coming from – but Primal Eyes (especially within the context of the gameplay) is just about the single most awesome track from the OST. I thought Reaper was the tits from the OST (which I talk about in #26) – but after listening to Primal Eyes, I’m forced to change my perspective.

Can we take a moment to reflect on the title of this theme? Can you not see the dramatic, almost Shakespearen quality of it? The official title has no comma after “Once”, though when it was recommended to me for the first time by a user in a forum, they erroneously did just that. For a good while I thought that was the correct grammatical title of the theme. I know now that isn’t the case… but you cannot deny, even with the comma the title sounds just as dramatic – perhaps even more so. My knowledge on the English language isn’t 100% flawless but I don’t think the extra comma changes the meaning of the statement. What are your thoughts about this?