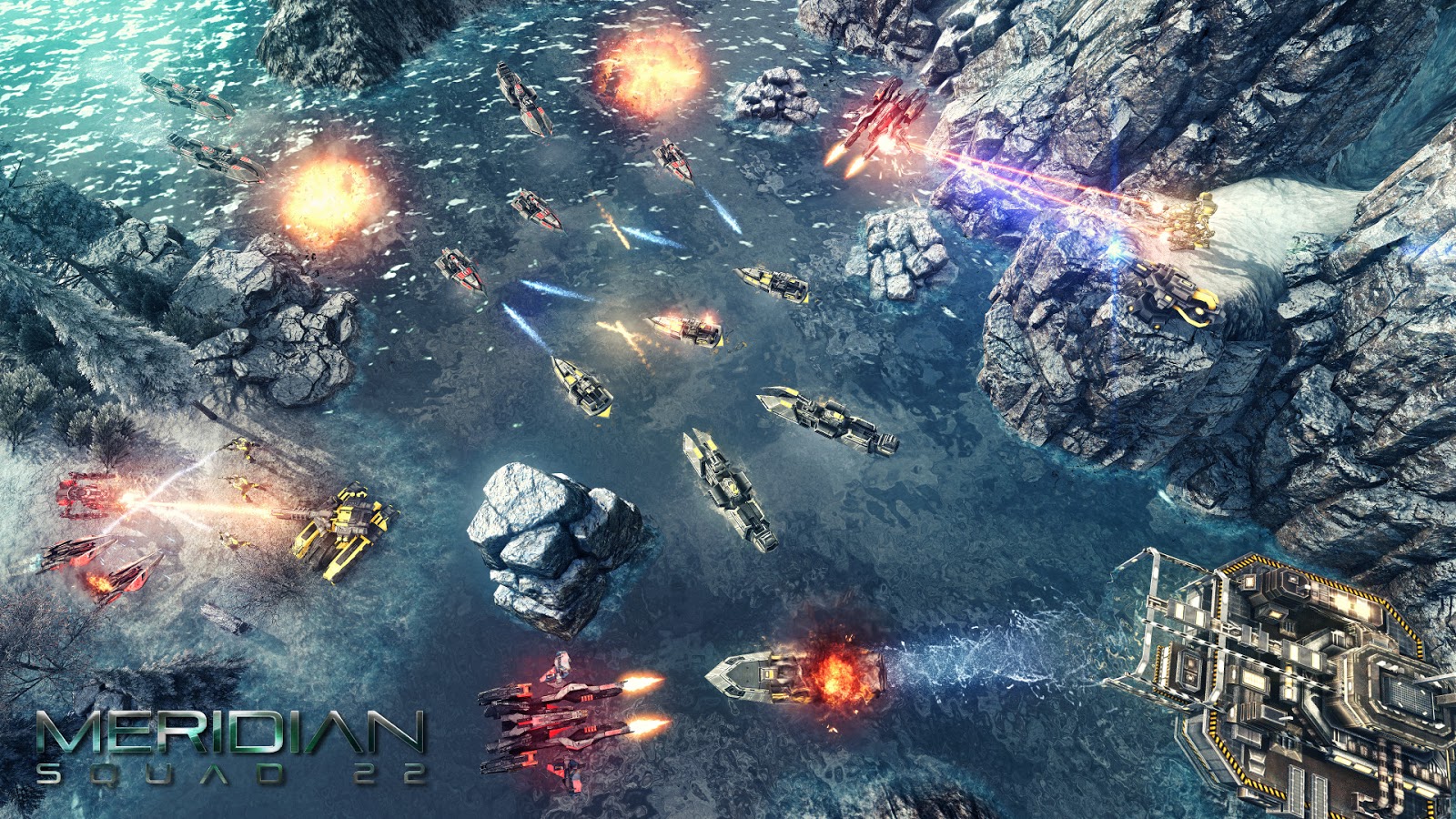 Way back about a million years ago (2014) I was fortunate enough to get my hands on an early preview, and later, a review, build of Meridian: New World. Even then I was quite impressed at the quality of Meridian: New World, never mind the fact that it is developed by one man. Yup; you read that right. One person. Still, the game marched through its Early Access period and on towards release and was a solid throwback to the classic RTS juggernauts of yesteryear. Fast forward nearly two years exactly and we are brought back to the battered world of Meridian in the pseudo-expansion/psuedo-sequel, Meridian: Squad 22. Following the events of Meridian: New World, humanity is once more in peril and with the first colonist crew missing, Earth sends a new squad to Meridian, this time with the purpose of bringing them home. You will want to hold onto your hats over the course of the next ten to twelve hours, as Meridian: Squad 22 comes back with furious combat, fluid control, and a surprisingly decent single-player campaign. Though the campaign is fun, and a testament to Ede Tarsoly’s dedication to gaming as a whole.

I am just going to throw this out there right now, and I am likely alone in this though, but it sort of bugged me. I could not help be be reminded of Squadron 42 and Star Citizen; mentioned in passing, or quickly perusing through various sci-fi gaming websites, I was constantly seeing “Squadron 42” and all of the atrocious mess that comes along with Star Citizen whenever I saw “Squad 22” (as Elder Games’ latest release is oft-times called). Perhaps it just hits too close to home, and how disappointing Robert’s giant brain-child is becoming (seriously, Star Citizen is now firmly in the company of Daikatana and Duke Nuke’em Forever). Perhaps it is as I said and it is just me, but it really sours me seeing it. But it is just a name, and let me assure you, even in the Early Access stage, Meridian: Squad 22 is parsecs beyond anywhere Star Citizen could hope to be. Meridian: Squad 22 is an actual game. 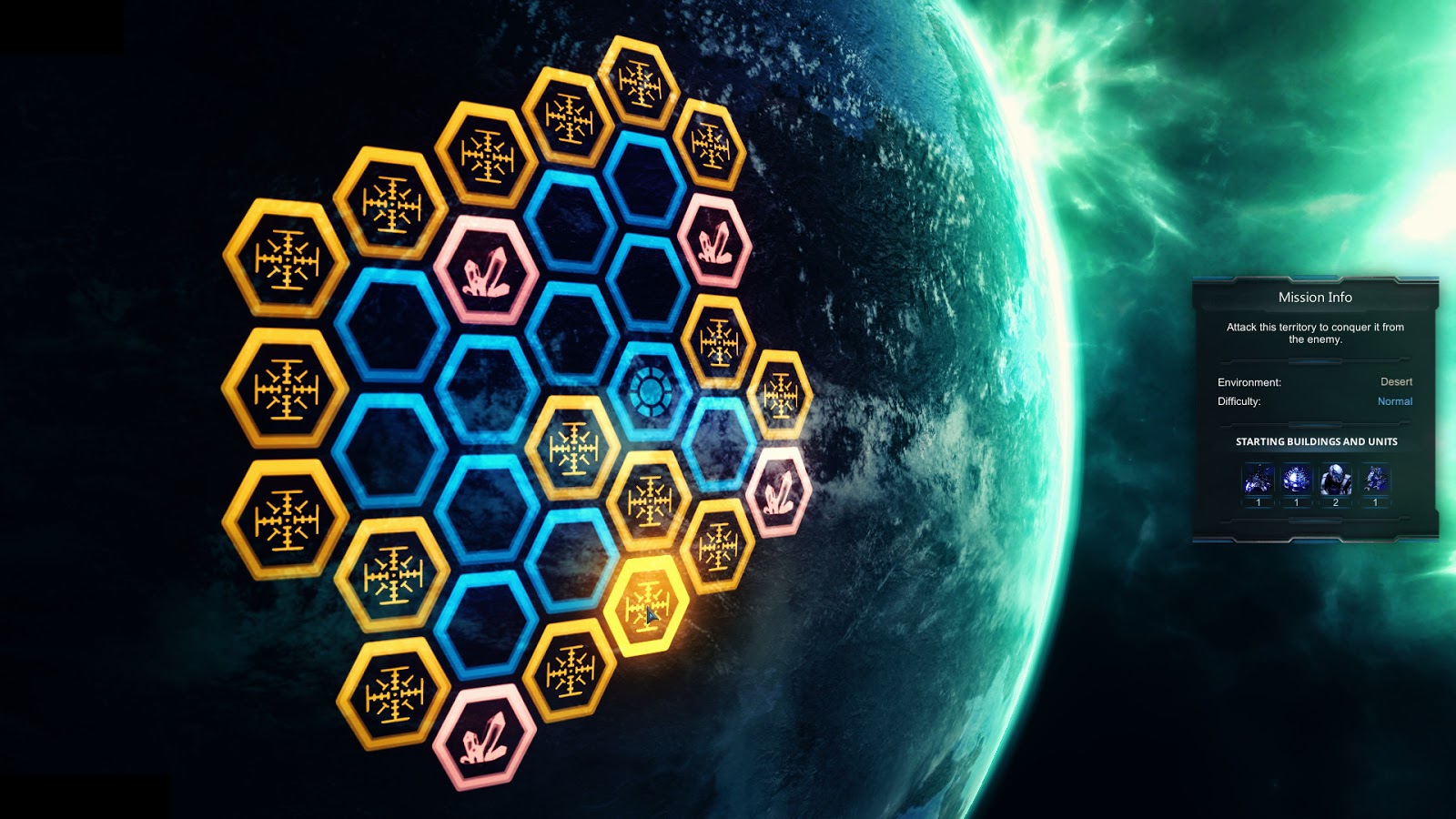 Now that I got that useless tidbit out of the way, on to the real meat-and-potatoes of the preview. Those of you that played Meridian: New World will be both instantly comfortable with the return to Meridian and pleasantly surprised at some new aspects and rebalancing found in Squad 22. Like its predecessor, Squad 22 is a single player Realtime Strategy game (RTS), and is designed to be one from the ground up. Due to the utterly massive popularity of Warcraft III: Reign of Chaos / The Frozen Throne’s mod “Defense of the Ancient,” (commonly referred to as DOTA, which birthed a new genre of horrible, the MOBA) RTS titles took a serious wrong turn, focusing more on multiplayer aspects in an attempt to glom onto the popularity of the trashtastic MOBA genre. Sure, some like Warhammer 40k: Dawn of War II stayed focused on the single player, and it extremely successful and incredibly fun, but many RTS titles released since 2003’s Defense of the Ancients mod have flat out sucked. Elder Games’ Meridian: New World paved the way back to classic RTS superpowers, and with Meridian: Squad 22 they are looking to stick to their guns. It is incredibly refreshing to see a small (really small) development studio push to bring the classics back to the forefront in such a polished way. Frankly more people need to pay closer attention to these fine folks; before long they may be sitting on top of the traditional RTS trash mountain.

This laser-straight focus on traditional RTS values is likely a big part of why Meridian: Squad 22 sticks so well with players; Squad 22 is not about how many thousands of clicks you can make in the span of a 32 minute League of Legends hate-filled scream-fest (seriously, MOBA players are the worst), nor is it about how fast you can can Lurker rush while pushing a million-and-a-half Zerglings through to an unsuspecting Terran’s base. Meridian: Squad 22, like Meridian: New World is about the adventure, the excitement, and the stresses that come with crash-landing on an alien world; it is about managing your resources, outwitting a superior enemy, and doing so while following a solid storyline set in the lush, beautiful, and deadly world of Meridian. In between missions you will find yourself wandering your ship’s interior as Mark Quinn. Here you will advance the plot, make various choices and get to know the crew. 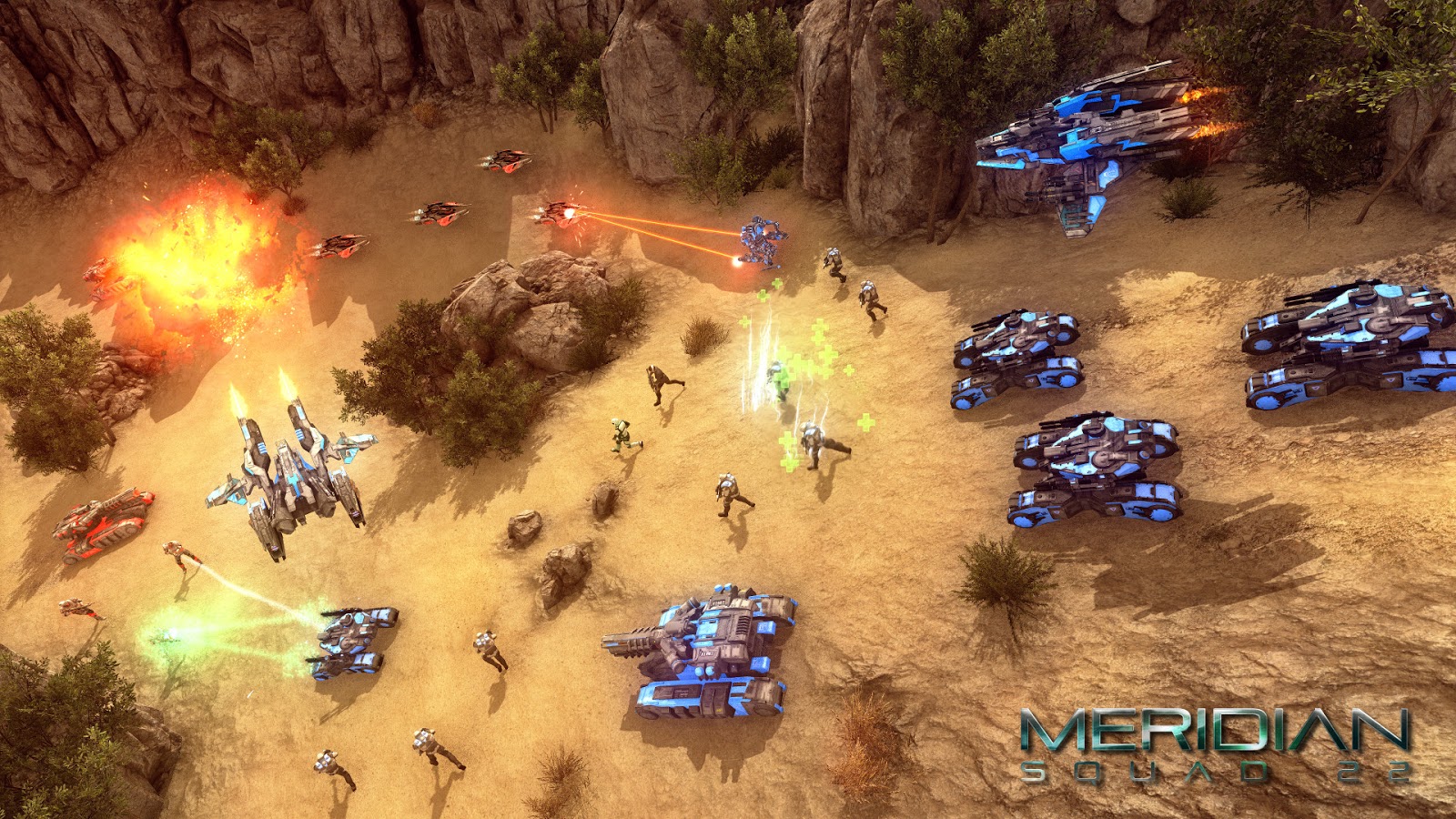 Though the units are wonderfully modeled and the explosions happily go “boom-boom,” there are a few annoyances that I hope are addressed before full release (though really, they are annoyances, not game-breaking bugs, though I did have two odd crashes in the 13-15 hours I have put in so far, which is not bad), mainly little oddities with the UI like persistent or locked windows that partially obscure view. The biggest weak point in Squad 22 was also in New World and that is unit pathfinding; man is it wonky in places. Bad enough at times where I was micromanaging units by having to manually direct small groups through various channels in the map. As I said, annoying, but not game-breaking.

To be honest Meridian: Squad 22 is a game I did not realize I needed until after I played through the first few missions. With its charming throwback to RTS games of yesteryear, and Ede Tarsoly’s push for a true single-player experience, Meridian: Squad 22 is shaping up to be a true treat for realtime strategy fans. Though it is early on in the Early Access stages, what is there is a fairly solid successor to one of the better hits of 2014. If you do not mind a hiccup here or there, and would like to support this incredibly small and incredibly talented development studio, head on over to Steam and pick it up today.