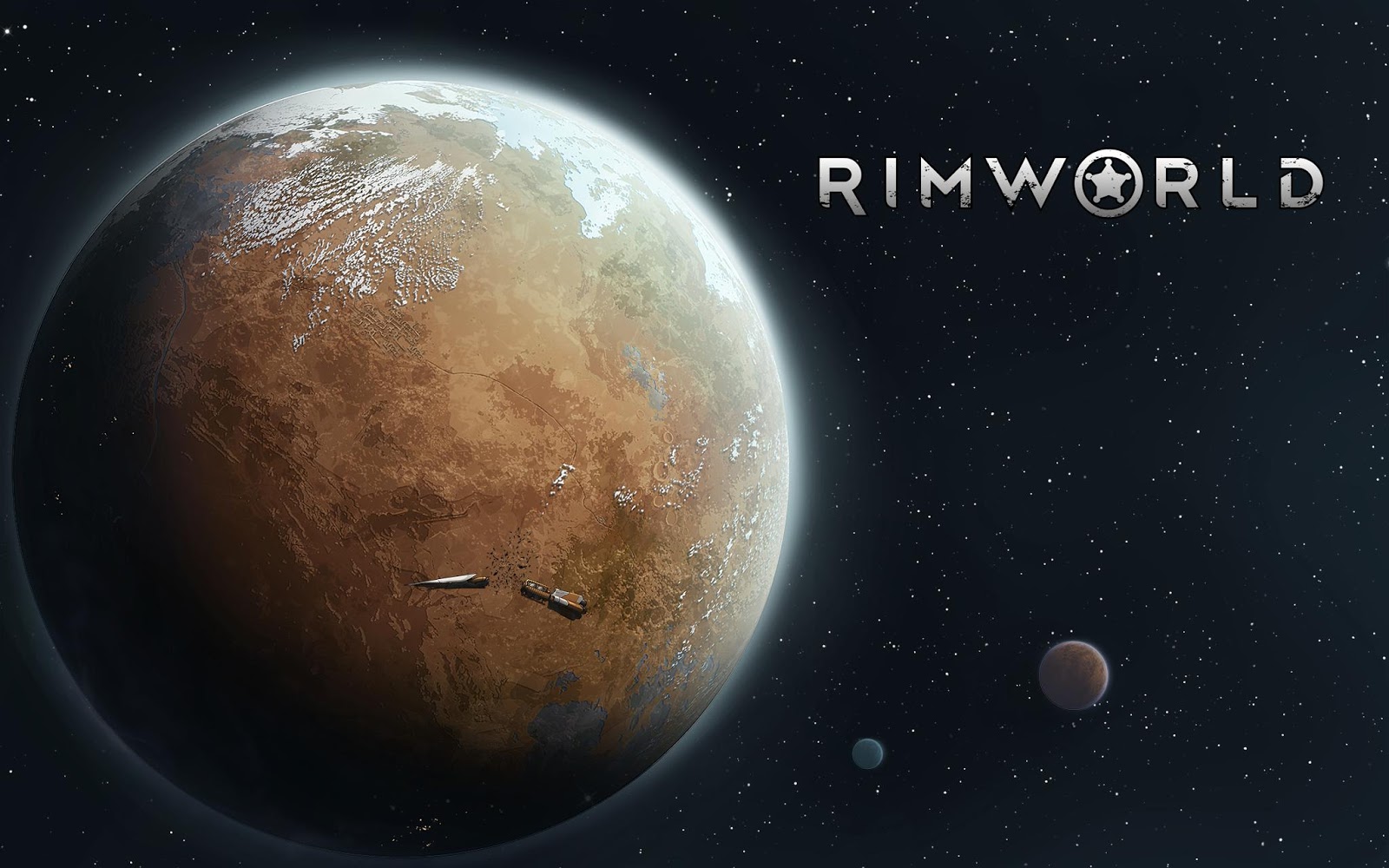 RimWorld has been making waves lately in the sci-fi sim world. Toted as being “inspired by Dwarf Fortress, Firefly, and Dune,” RimWolrd puts you in charge of a pile of colonists that crash-landed on a hostile alien world where you will be beset by roaming beasts, pirate raiders, giant insects, and crazy-old killer robots. Unlike uber-popular sims like Cities: Skylines or The Sims, RimWorld is a story generator; developed to co-author the oft-crazy antics of your colonists, whether that centers around your band of survivors succumbing to starvation, fighting of space pirates, or simply telling the story of survival. These ‘co-authors’ or storytelling AI, chosen at the start, will control the random events that you will come across; whether that is a traveling salesman, climate change, or raid, the chosen AI will reign supreme. Given the unique setting, the inspirations, and the often-tragic stories that take place, RimWorld has no end of replayability and though it is still in Early Access, worth every moment you spend in game.

Now, some of you may know that RimWorld has actually been available in some form or another since it was first publicly released back at the end of 2013. There may be a bit of trepidation when you see that though, as there are a near-infinite number of games that have come out in Early Access to much fanfare only to fall into obscurity a year later when the developers just up and disappear. Not so with Tynan Sylvester and the goo folks at Ludeon Studios, as they have faithfully updated RimWorld with regularity since it was first released as an Alpha, and with their constant communication regarding feedback, do not look to be going anywhere any time soon. They are, without a doubt, absolutely committed to bringing the best sci-fi sim experience that they can, and that level of dedication shows in every aspect of RimWorld. 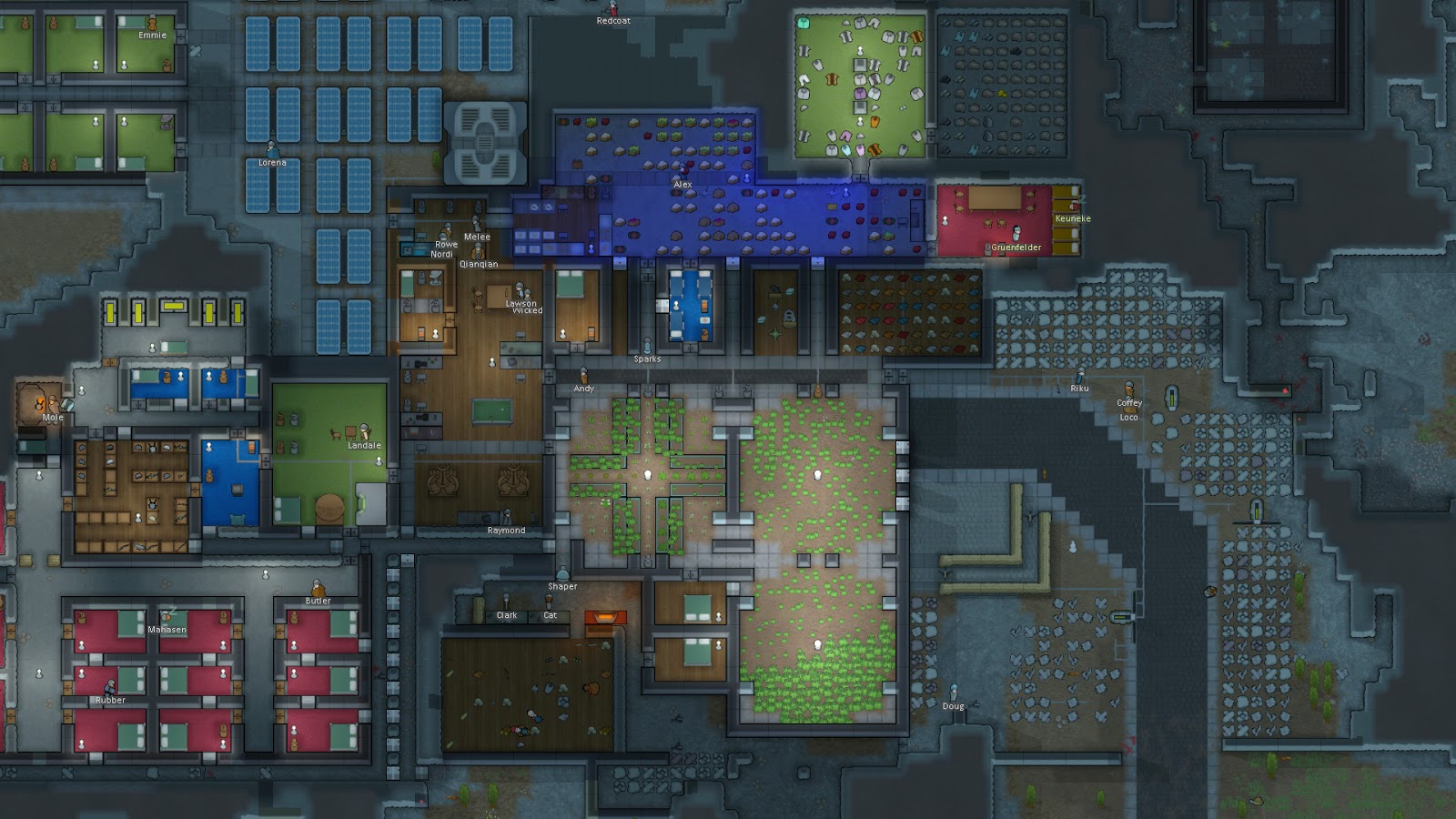 Let’s start with the AI in RimWorld; it is pretty common to jump into a game and be hounded by the tutorial then, unless there is some sort of “nightmare” difficulty available right at the start, your hand is held through the majority of a game. RimWorld’s selectable AI co-pilots range from fluffy and hand-holding to down-right cruel, but not once is it obtrusive or too “in your face.” Acting as a true co-pilot, in sync with your every move, the AI in RimWorld helps fashion and direct the story of your colonists while you yourself are managing them on a more personal level. In truth, the storytelling AI (or “co-author as Ludeon often calls it) is brilliant and quietly running in the background, trying to be as out-of-the-way as possible while still feeding you a stellar story of colonists that start (or horribly end) relationships. In fact, through the few dozen games I play (I think I am not so good at this game, though I am a master at games like Cities: Skylines or SimCity 4) there were many instances where I wish there was some sort of logging or recording function built in so I could capture those stories. Some were hilarious, most were tragic, one or two were actually half decent happy stores (played with the Phoebe Chillax AI of course).

Once you choose your starting scenario (you can do a custom scenario, download one from the Steam Workshop, or use one of three built-in scenarios), I generally chose Crashlanded, the “core” experience, which provides you with 3 colonists and plenty of resources to get you started, you are on your way to a tragic ending (note, The Rich Explorer scenario is one that I did the best with, likely due to the gun turret research you start off with). The third built in scenario, Lost Tribe, nets you 5 colonists but fewer starting resources; I only spun up this scenario once or twice but lost interest as I was more interest in a more casual experience than an immediate “get to work or you will die” experience. After you select your colony site on your randomly-generated seed world, it’s on to choosing your colonists. 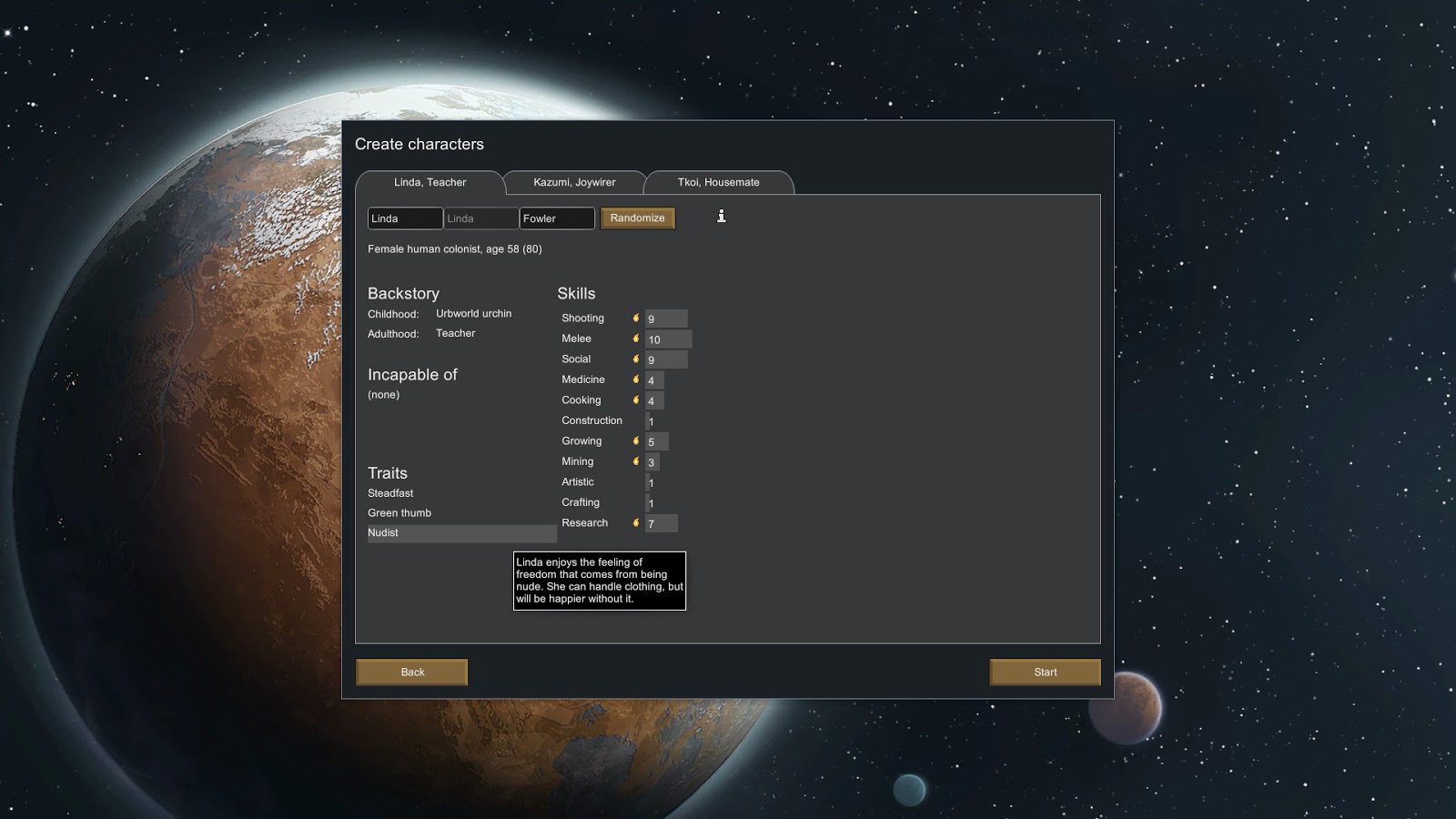 There is a fancy “randomize” button that you can click to cycle through randomly created toons; I probably spent an hour going through and clicking the randomize button to grab healthy (if a little old) colonists that were well rounded in their skillsets. Most were decent with growing or crafting or construction, though my one younger colonist (a 16 year old), was good socially, had a high shooting score, and was quite adept at construction. Once you have your peeps its on to the game itself … the only real downside at this point? Loading time. Generating the map is no a fast process; in fact it took a bit longer than expected, but I am confident with the amount of work Tynan and Ludeon put into RimWorld, the procedural engine will likely be optimized well before the game launches a final build.

Once you are into your map the game plays a LOT like Dwarf Fortress, Stonehearth, Banished, or really any other colony management game. The neat thing is the darker colors, the bloom-like lighting, and the desolate feel of the worlds; it lends itself very well to the idea that RimWorld is like Firefly or Dune (particularly Firefly, as the entire feel/aesthetic of RimWorld is very Western/frontier cowboys and space-pirates). I do sort of wish that RimWorld would walk you through the basic steps of building the generic necessities for survival, but that may just be my lack of skill at survival games talking. It is not immediately noticeable that along the right-hand side of the screen there are some clickable text links that appear that work to be your tutorials/hints, and it took a bit of trial and error at first to realize that they were there. Perhaps some flashing text could help? Once you get the hang of the very simple UI it is on to building your colony, zoning, gathering resources, and assigning tasks. Once you have a decent plan laid out? It is just a matter of watching/assigning tasks as needed. 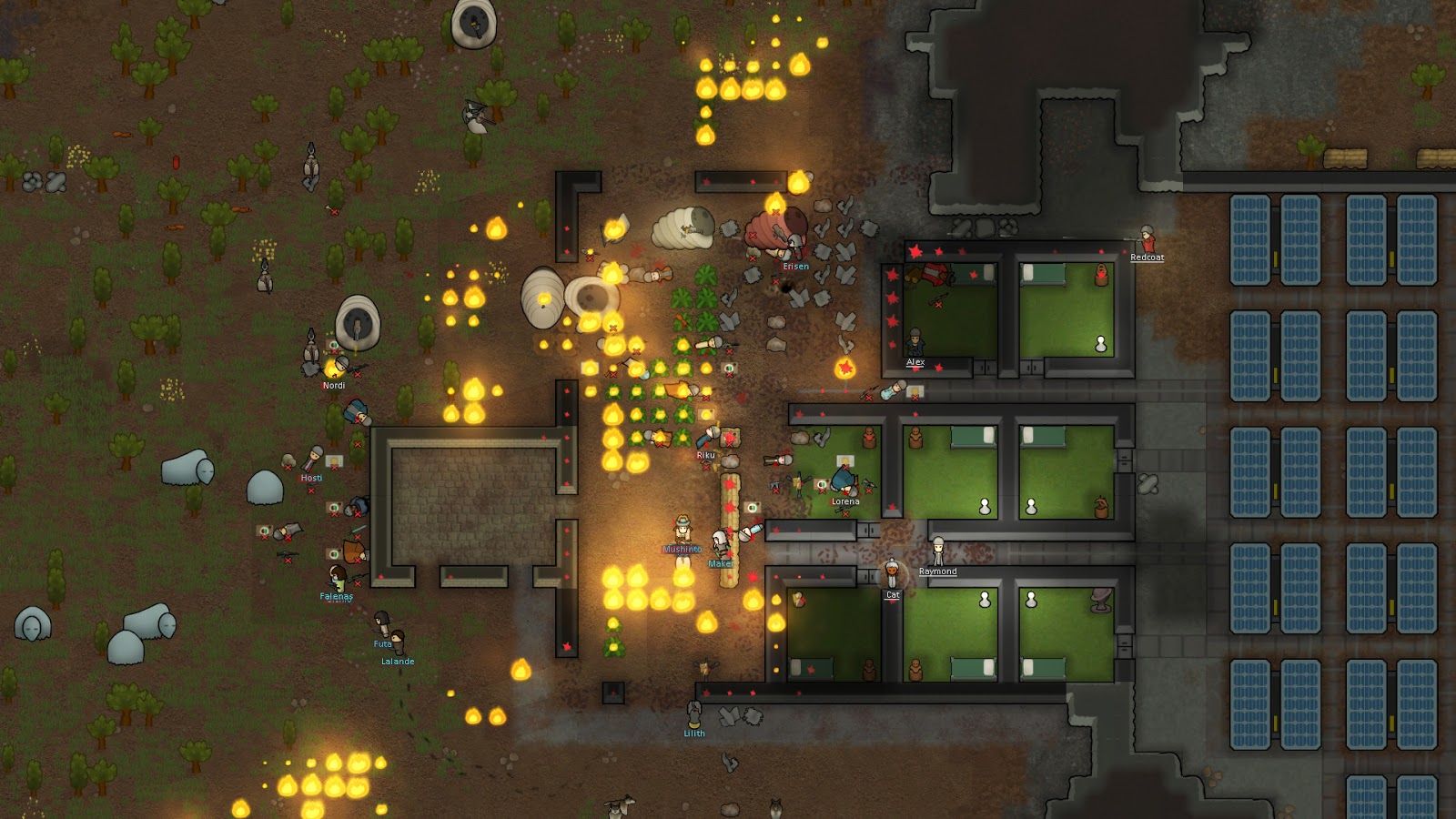 RimWorld is both shallow and deep, solid yet slippery at times. Performance is rock solid and any issues reported to Tynan/Ludeon are quickly resolved which means ongoing support and development is not going anywhere anytime soon. Adding to the excellent service and solid Early Access build is an incredibly engaging sci-fi sim that has the feel of something so much more, something deeper, while being something extremely simply and oft-times, care-free. Since every playthrough will be different, and there is enough here to be engaging, in no way will RimWorld start to feel old or tired. For those looking for something interesting on more levels than one, RimWorld takes a handful of survival and sim genre archetypes and combines them into an incredibly enjoyable experience. RimWorld is a must-have sci-fi simulator focusing on individual stories and even in its Early Access state will be right at home in any gamer’s library. Pick it up at: http://store.steampowered.com/app/294100/