comments Share
You are reading
We Happy Few – PC Preview 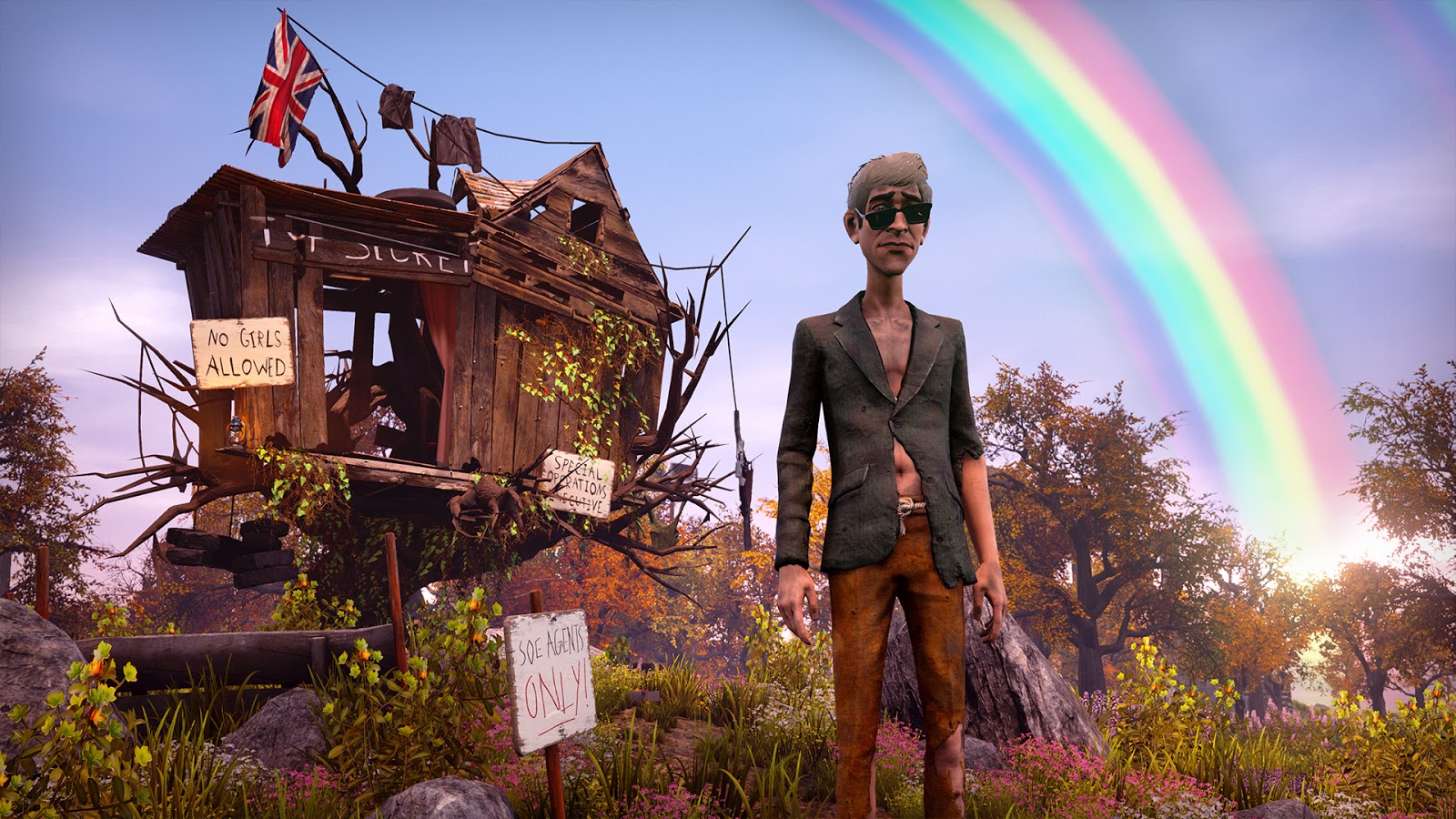 Like most people I know, I hadn’t really heard much about We Happy Few until E3 2016.  As such, I didn’t really know what to expect.  After Microsoft’s conference, it really looked intriguing.  I liked the art style and the pseudo-steampunk vibe. When it was released for preview and Steam Early Access, I knew that I wanted to check it out.

You play as Arthur, a character that in any subsequent movie adaptation could only be played by Martin Freeman.  He’s your everyday chap just trying to do well enough in his lowly government job to hopefully someday move up to the corner office.  And oh, there is a vacancy now, since the previous occupant went off his meds.

You see, in the world of We Happy Few, everyone regularly takes Joy, a drug that keeps them in a perpetual state of happiness.  No shocker here, but the mood-altering drug is hiding a dark secret.  The happy, fun world everyone lives in is actually a dreary, worn-down world full of danger.  In order to keep the populace in line, they are medicated and told to identify and stop anyone that doesn’t comply. 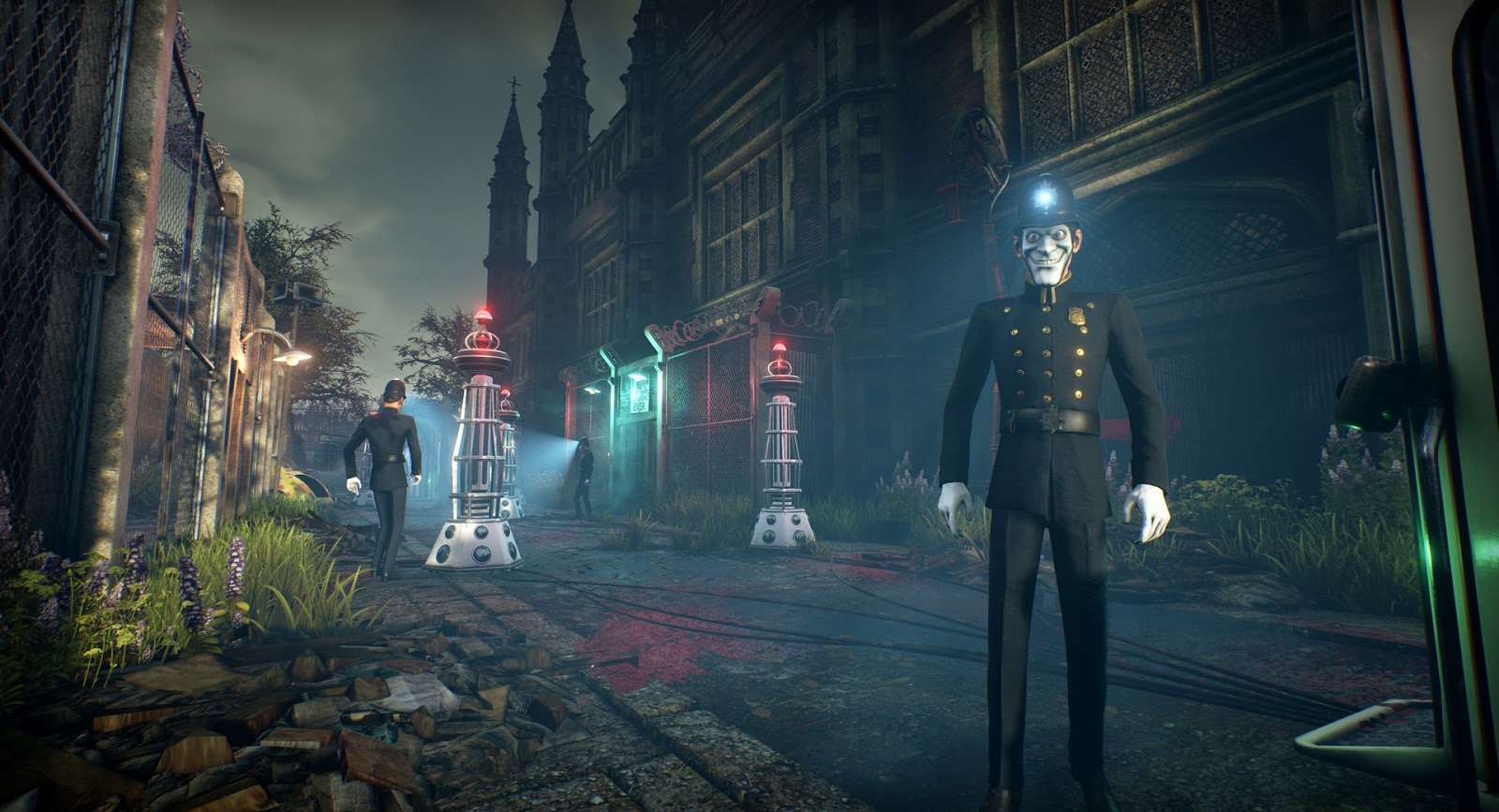 One day, while plugging away at his important job of redacting anything newsworthy from the papers, Arthur’s memory is jogged and he decides to not take his pills.  From that moment on, Arthur’s eyes are awakened to what is really going on around him.  Now it is a matter of survival as the authorities are constantly on the lookout and you don’t know who you can trust.

We Happy Few’s greatest strength is its world-building.  Right out of the gate, the game creates an environment and characters that evoke emotion.  You immediately despise his supervisor at work, you sympathise with the other Downers (you aren’t the first to stop taking your meds), and you are wary of anyone who is too happy.  The game takes place in a 1960’s England where World War II turned out very differently and their world diverged from our own.

The art style complements the mood perfectly.  The architecture and characters reminded me most of the Fable series on Xbox and Xbox 360.  Everything is cartoonish and exaggerated in such a way that it feels both quaint and creepy.  While the scenery makes me think of Fable, the characters remind me of Bioshock.  The residents of Wellington Wells look like they’d be right at home wearing bunny masks deep in Rapture.

As nice as the art style it, it can get repetitive.  The first part of the game, before you are able to cross over into Wellington Wells proper, there are a bunch of burned out houses that look very similar, with little to distinguish one street from the next.  I had to rely on the minimap quite a bit to get where I needed to go, especially because the survival timers are forcing you to be on the move and not linger or stray too far. (I’ll come back to those survival timers in a minute…) 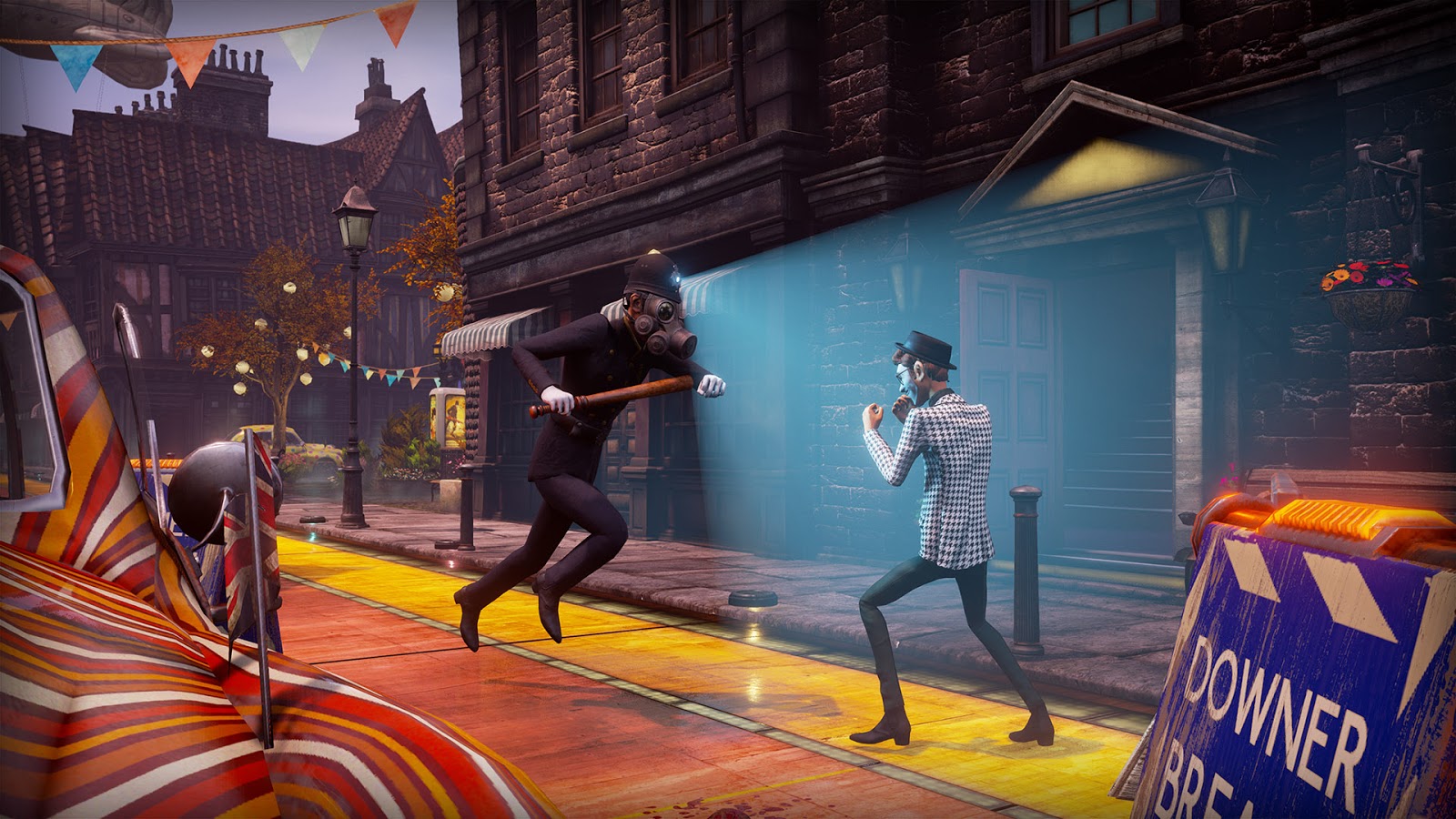 As Arthur begins his newly awakened life, the game itself emerges.  It is a mixture of survival/stealth and lite RPG.  Interacting with different characters will trigger quests for Arthur to complete; some quests require specific equipment to be able to complete, like shovel in the early game.  In order to get that equipment, you may have to perform other quests or explore around until you find it.  You may find yourself on a string of related quests that are linked together by these types of requirements.  The quests themselves are decent enough.  Nothing seemed terribly earth-shattering, but some of the NPCs are amusing, so some of the busy work is entertaining at least.

While you are running around doing main quests and little side quests, though, you’ve also got to be scrounging to survive.  You need to worry about food, water, and sleep.  Honestly, this is the main thing that I hope gets tweaked before the game is finally released.  I don’t mind having to worry about those things.  It keeps the game immersive, feels more “real”, and keeps you moving.  The problem, though, is that the cycles are way too fast.  Get a good night’s sleep, grab something to eat and drink and you should be good for a while, right?  No, afraid not.  It really feels like I barely have time to find something to eat and then I’m getting warnings about being thirsty; better go find something to drink.  Finally found some water, now it is time to sleep.  Oh and when you wake up, you are going to be hungry again. 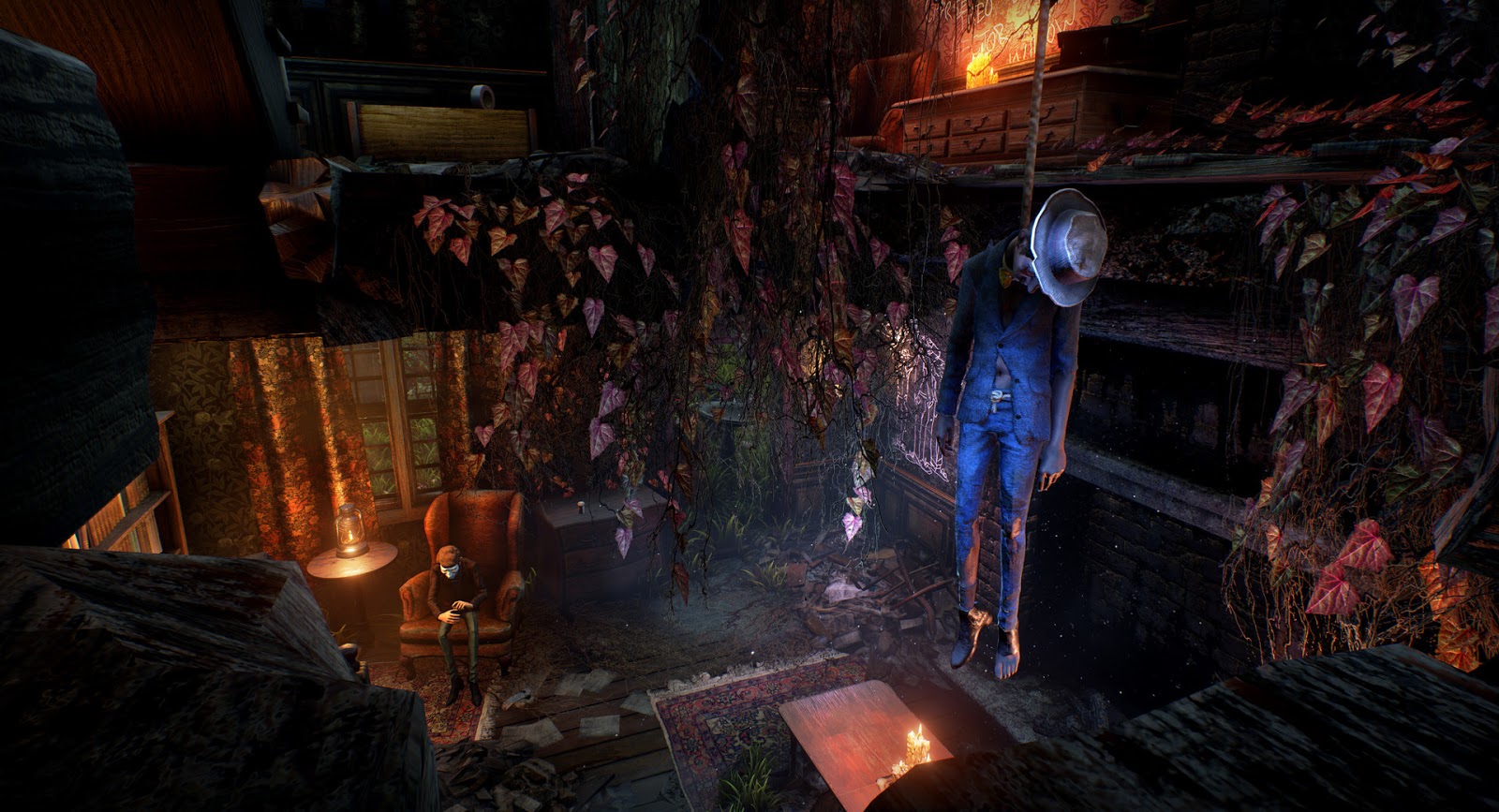 To make it harder, food and water do not respawn, so you can’t just pick out your favorite watering hole and make a run to it every so often.  You are constantly on the move.  Again, here is where some of the geographical repetition can hurt.  As you are looking around for food, it is not easy to remember if you’ve already gone down that street or not.  The minimap helps by pointing out locations of interest, but you’ve got to get in range.

Right now, it feels like I’m spending more time taking care of surviving than just exploring this cool world or completing quests.  I would definitely appreciate it if the different survival timers were slowed down or extended to give you more time to just look around.  In the end, though, Compulsion Games may keep it as is to keep the balance skewed towards survival and less towards standard lite-RPG.

We Happy Few’s other main nod towards the survival genre is its permadeath mode (which appears to be the default).  That’s right, your character can bite the big one and you are done. Get ready to restart. Combat is difficult (especially in the early going and particularly against multiple enemies at once), so you really want to try to avoid trouble.  Luckily, if you aren’t a fan of dying and starting over, you can shut that feature off. 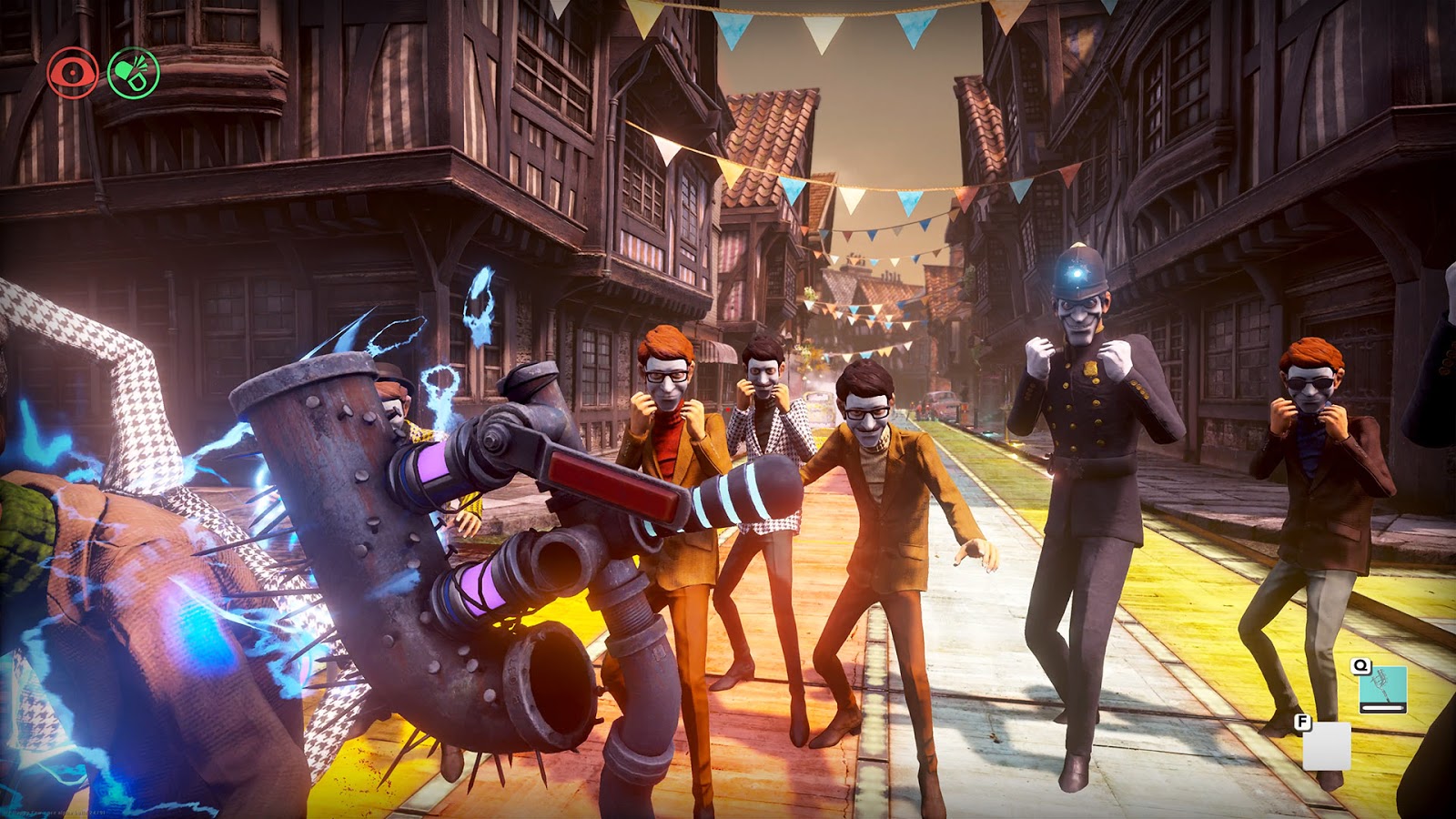 Overall, We Happy Few has an interesting environment, an overall engaging story, and a interestingly bemused protagonist.  Supposedly, the main game will have at least two other characters that you can play with intertwining storylines.  The quests are serviceable enough to not get in the way and I enjoyed most of my time with the preview.  Even if the survival timers aren’t tweaked for the final release, the game has enough going for it that I’ll be on the lookout for it.  I’d like to see how the storylines interact and explore this interesting world further.