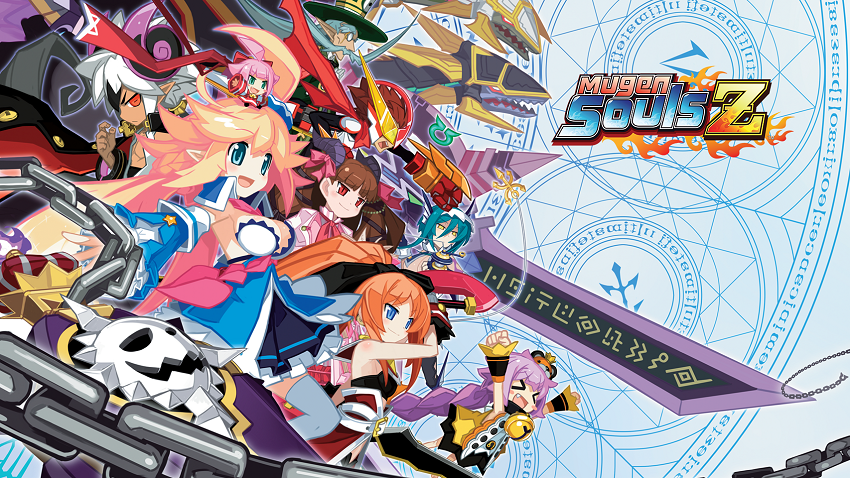 Mugen Souls Z is the direct sequel to the Mugen Souls title released in 2012 for PS3, and re-released for PC last year. Now it’s time for Mugen Souls Z to get its PC port! For those who haven’t played the first Mugen Souls or read the review (also prominently featured on this site, as well as a PS3 review for Z), Mugen Souls Z follows the plight of the Undisputed God(dess) of the Universe, our lady Chou-Chou! For those unaware, my avatar icon for PSN is actually Chou-Chou’s terse form from the first game.

As Chou-Chou loses her size and powers in what can only be described with (T_T), she must work with Syrma, Nao and the rest of the wacky cast, both old and new, to regain her powers, and height. If I were to summarize the Mugen souls franchise as a whole, I’d say it feels like an interesting cross between Hyperdimension Neptunia and Disgaea. Basically this means it puts the J in JRPG. Not to say that this is a bad thing, but Mugen Souls Z is a very niche game.

Let’s start off with the gameplay features. First up we have combat, which can broadly be divided into two parts: grounded combat and ship battles. Grounded combat, which is the bulk of what you’ll experience, is…interesting, to say the least. For the most part, you can deal with your enemies in the standard RPG turn based manner. Those with the highest agility go first/get more turns, and you take turns smacking each other with comically oversized weapons, some of which are actually pretty funny to see. Obviously that isn’t all there is to the battle system, but you could feasibly ignore most of the other systems without too much difficulty, unless you really like level grinding or getting a but whupping late game. 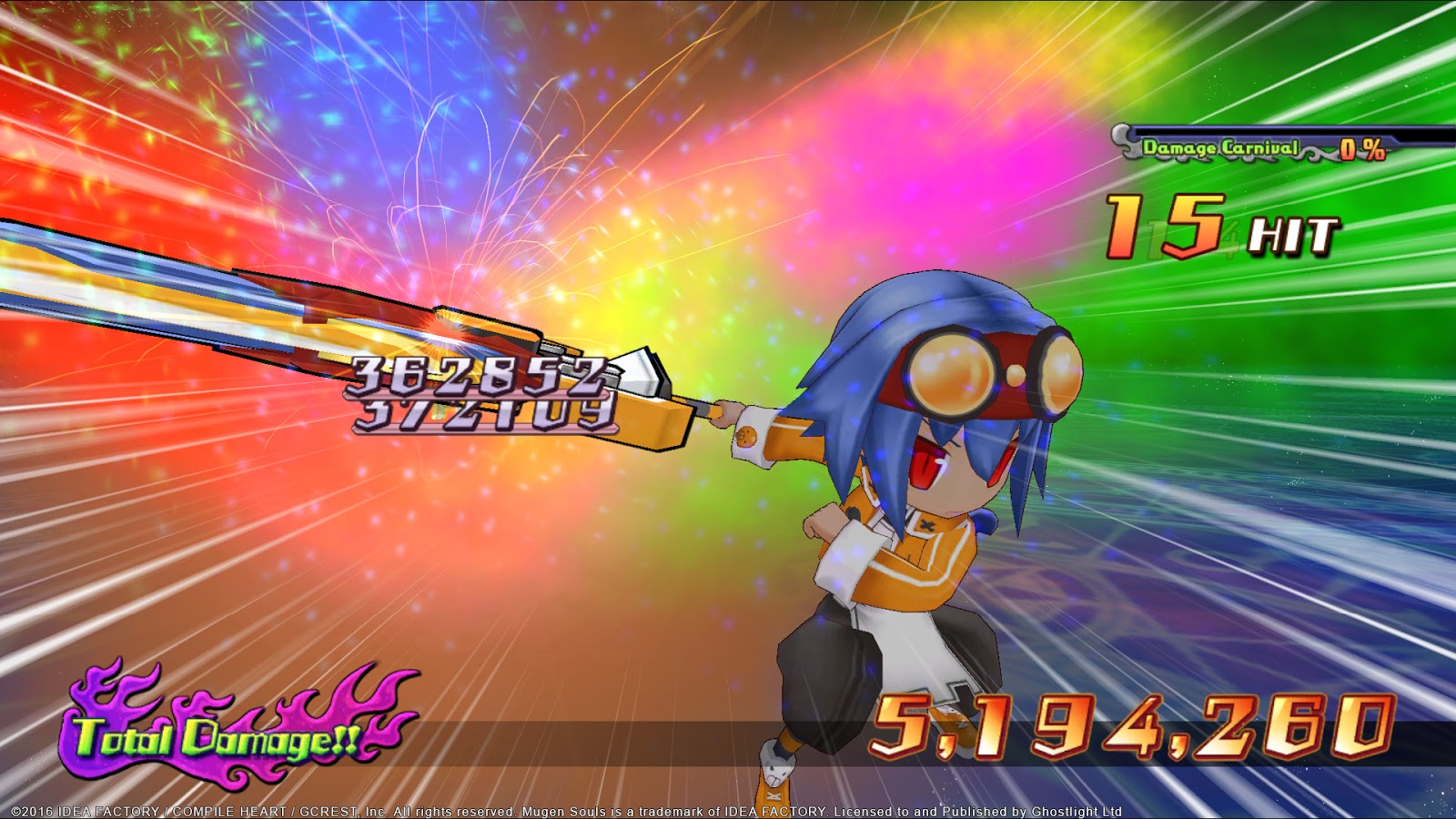 In addition to the standard RPG battle format, there are a few unique aspects added to battles, such as the crystals that litter the field, peon-ing your foes, or the “blast off” system. The crystals are Mugen Souls version of geo panels from the disgaea series. Basically, they provide random effects in a radius around themselves. There are large and small crystals, which can only be broken by either peon-ing them or using the blast-off system. Blast-off works by building up a charge after using certain skills, and then you can use that built up charge to send your enemies flying. Peon-ing your enemies is the main focal point though, or at least it should be if you don’t want to cry in some of the later battles. Basically, you attempt to cater to the monster’s fetish through a personality change and some fancy poses and lines.

If it works, congratulations, you’ve made a peon! If not? Expect some pain.

The reason I said you might cry if you ignore the peon process? Well, that’s where the ship battles come in. The strength of your ship is entirely dependent on the number of peons you’ve made. In other words, some of those mandatory ship battles can really lay the smack down if you don’t gather enough peons. The ship battles can either be a blight on your life or the easiest thing ever. Why? Because they have a heavy RNG component. Have you ever played rock paper scissors and lost 42 times in a row? Well, good luck with the ship battles then. The only thing I can say is thank god for the pierce command. The ship battles are a wonderful punctuation to the standard combat, normally appearing just as the combat starts getting a little grind heavy or boring. 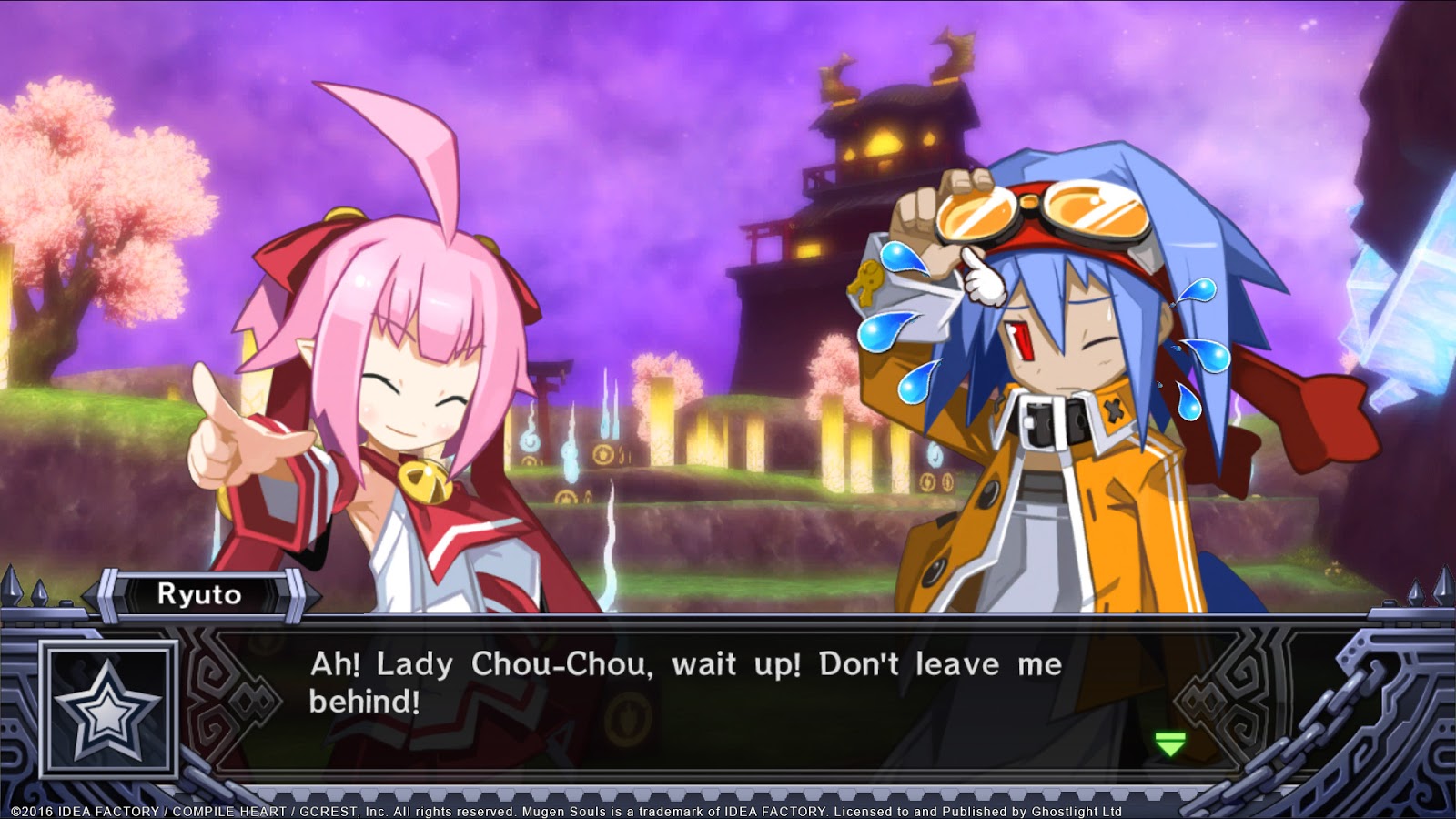 Out of battle you can roam around the world map, turning specific areas of the world into your peon. Meeting certain percentage quotas will provide you with money and peons, and possibly open new areas for you to explore. As you progress through the plot, you will gain field map abilities, such as super jump, which will allow you to access new areas to explore. Your hub zone provides you many options as well, such as stat improving hot springs, a character creation store, the mugen field, and challenge battles. The mugen field acts as a sort of quasi coliseum, where you engage in a series of fights until you reach a rest point, where you can challenge a super boss or leave for g up points, which you can use to enhance equipment.

The art and graphics are what you would expect from a PS3 era game. They aren’t bad, but they could certainly stand an upgrade. It’s very anime stylized, and while there are varied expressions for each character, the occasional desyncing of the mouth movements, or lack thereof, started to bother me after a little while. The music is a mesh of what you would find in Disgaea or a Neptunia game, which I’ve been playing so much of lately that I’m surprised I haven’t been driven up a wall and across the ceiling with how much of it I’ve heard over the past, well, months, which is a kind of testament to how the music is pretty solid. The voice overs are also done really well, and the voice actors are really able to draw out some emotion in lines that can sometimes be a little bland or stereotypical, so props to them for that. 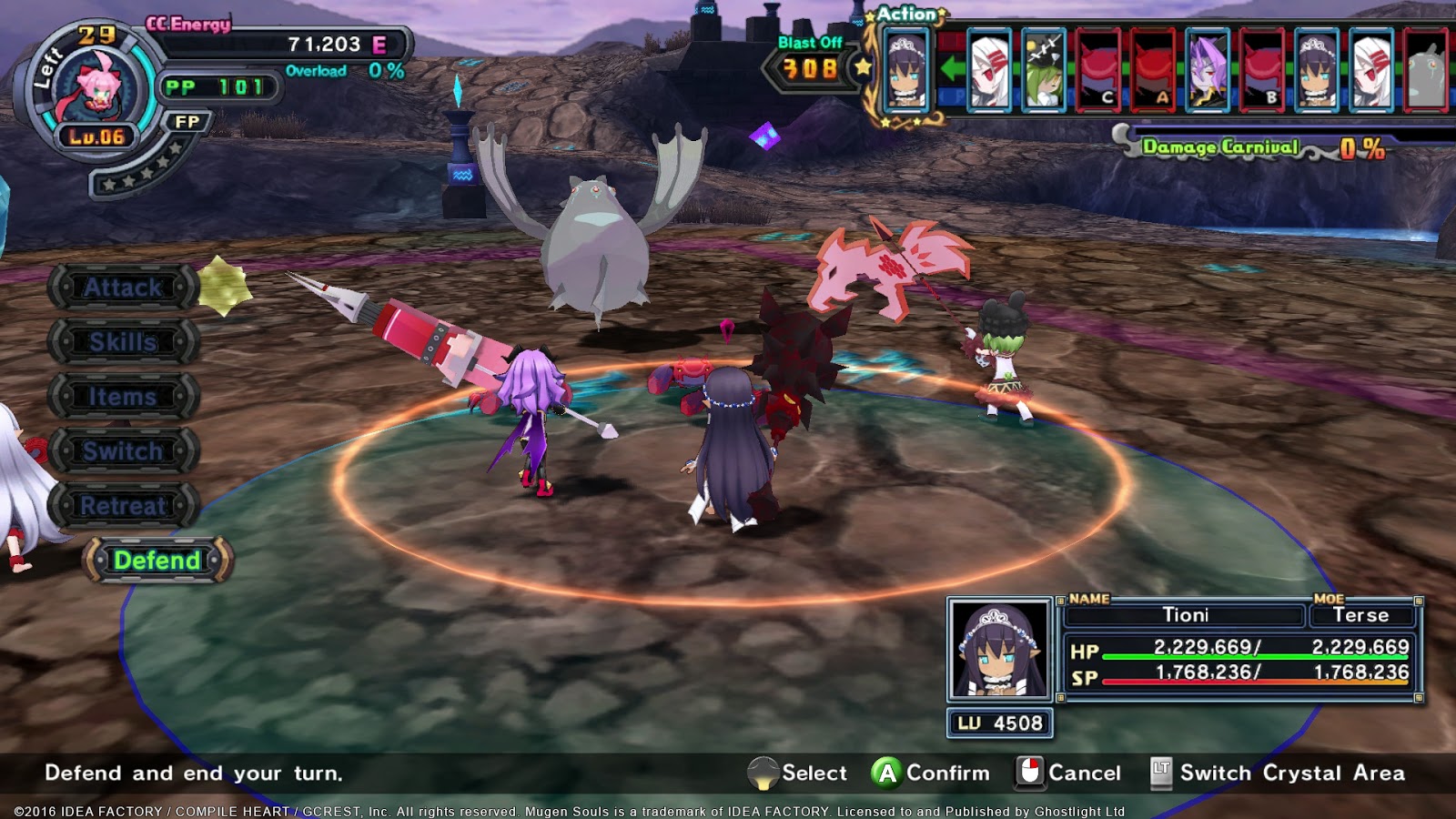 Characters are quirky and interesting, each providing their own unique personality traits, usually blatant stereotypes that the game will consistently poke fun at. There are plenty of characters and weapon types to choose from, and a great deal of customization is available, both for combat and general appearance. There are a bunch of cosmetic outfits you can choose from, which will provide bonus stat points on level. Overall, there’s a little bit of everything for mostly everyone, with plenty of bonus dungeon, fights, and bosses even after you’ve cleared the game, which has multiple endings. Honestly, I preferred the first game to the second, but all the improvements and the fact that they kept the same tone made it an enjoyable experience that seriously ate away my hours.

So now that we’ve covered the game aspects, what has changed in the PC port? Well, the first major aspect I noticed was that save times are basically instant, which is glorious, and I feel like the load times got a little shorter. There are a few frame rate drops during cutscenes, but nothing that I would call a serious flaw. All the DLC is nicely organized as well, which is nice. As a game, overall it earns a seal of approval. As a port, I would say it’s definitely a solid transition. 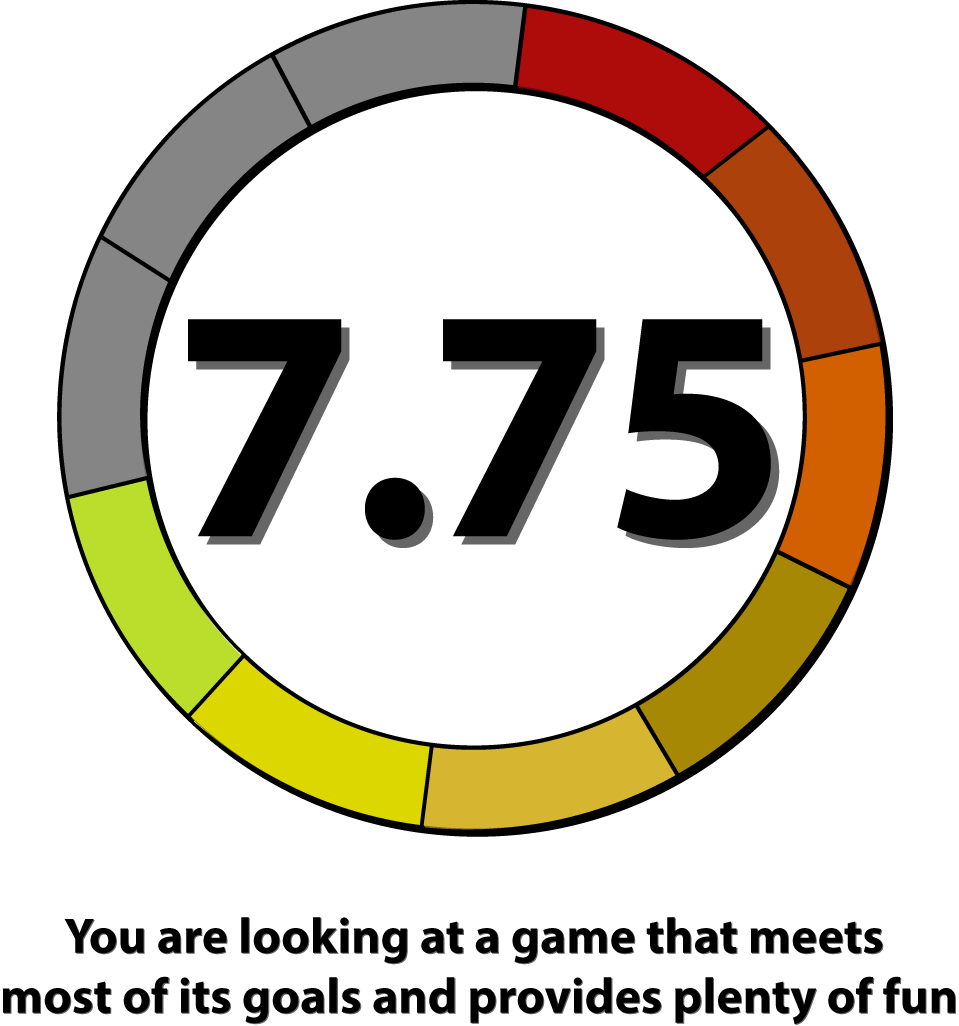