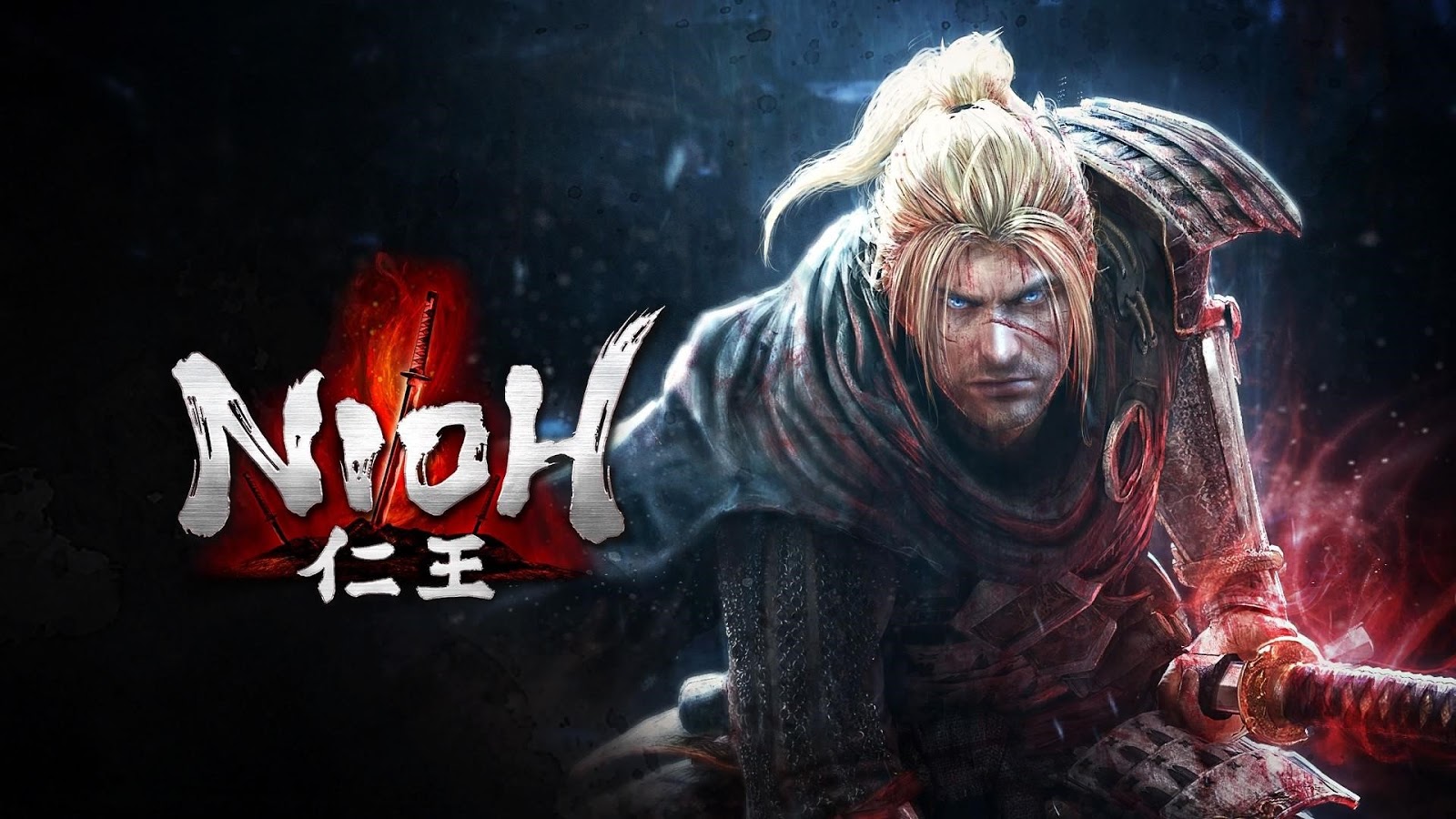 Jumping excitedly back into Nioh I was once again FREED FROM THIS MORTAL COIL. Repeatedly at times. Taking the feedback given by players from the Alpha phase back in May, Team Ninja and Koei Tecmo Games have re-designed some of the elements of the up-coming Souls like experience that sees William facing off against foes both human and demonic starting off on the shores of Japan in 1600 AD. Entering the Beta phase from the 23rd of August to the 6th of September, if Team Ninja have already put through this amount of changes to an already well built system I seriously cannot wait to get my hands on the full release. Like the Alpha before it which offered the Mark or the Conqueror to those that completed the Demo, the Beta offers the Mark of the Warrior to those that can complete the Beta as well as the original Mark of the Conqueror to those can can complete the original portion.

Recap of the Alpha 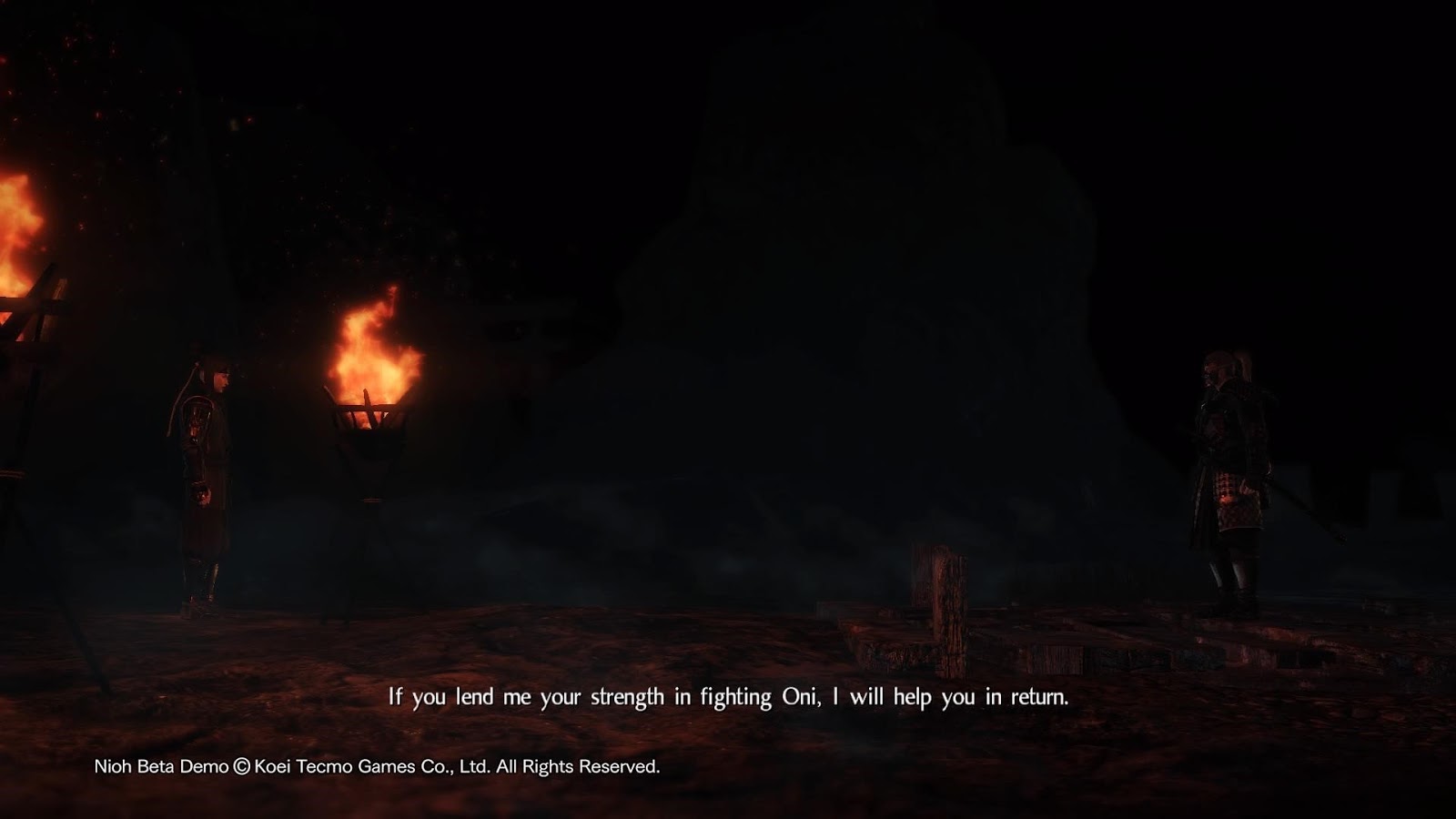 Nioh is an Action title takes some of the ideas that makes the Souls series tick but instead is attempting to carve out its own path with some interesting and unique ideas. Put into the role of the Englishman William, players will be traversing 17th Century Japan while fighting both Humans and Oni alike. Armed with a variety of melee and ranged weapons William will make his way through a variety of areas unlocking new routes as he explores.

Combat will feel familiar but it has its own quirks that should allow something for everyone. William can hold his weapons either in a low, middle, or high stance in order to have better control over the situation. A low stance allows for a lot of quick attacks while the middle stance finds a balance between it and the high stance which offers the heaviest of hits. Each affect stamina accordingly and have their own speeds for swinging the weapons.

Alongside the arsenal of weapons, William also has access to a Spirit Guardian that will protect the energy collected, Amrita (Souls, Blood Echoes, etc), after he falls. This spirit which can be changed for another (only three were available) will only remain where William fell for one attempt in order to make it back to that point. If William cannot make it back then the spirit guardian will return to the shrine in order to once again protect him. The catch with this is that unlike the Souls series which leaves a new point with the “experience” that was lost, Nioh makes it that both are lost because the Guardian was not there to protect it a second time, and thus, the reason they returned to the shrine. 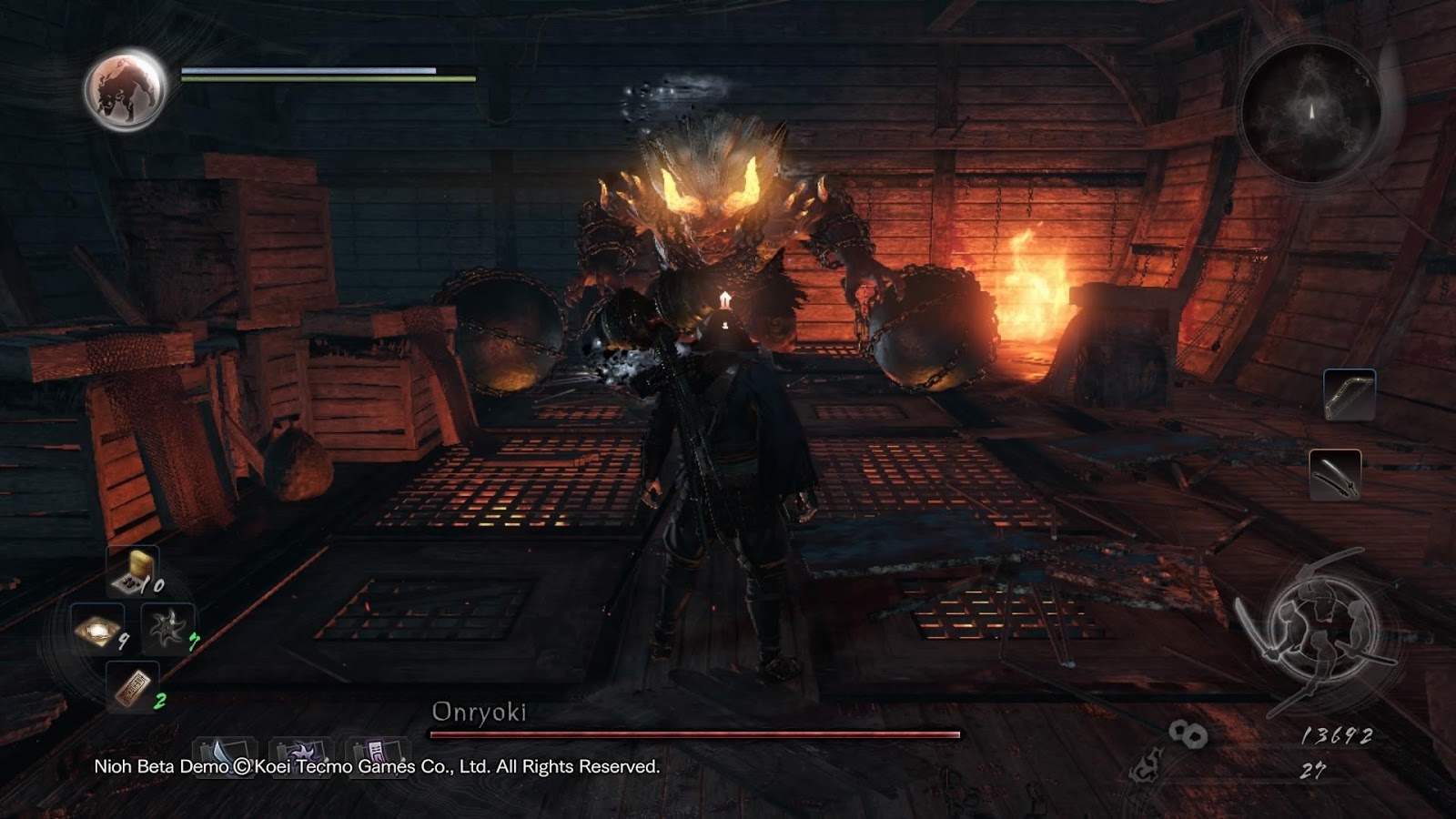 Using Amrita at the various shrines that are tended by the cute little Kodama*, William can level up a variety of stats that affect different physical or magical attributes. Strength, Body, Health, and others followed by Ninjutsu (Ninja Techniques) and Onmyo (Priest) Magic. Each point increases its respective numbers allowing William to hit harder, carry more, and prepare other abilities and items such as Shurikens and Fire Talismans with the specialization knowledge of these paths. How you wish to build up your character depends entirely on you.

Choosing stat points was simply the icing on the cake as each stat point falls into one of three categories. Every physical attribute falls into the Samurai category which is then followed by the Ninjitsu and the Onmyo. The reason for these distinctions is that for every point that is increased, one of those categories received a specialization point that could be used to learn new skills. These skills could be used for additional weapon techniques, preparing talismans that allow you to add fire to your weapon, or prepare items to throw at your enemies. Like the combat stances, skills exist for for each stance as well as overall skills that can be used as need be. Carrying extra ammo or increasing health was also possible.

The biggest issue that I had was weapon degradation. Being the very lucky person that I am, whetstones tended to not drop off of foes leaving me stuck with a number of broken weapons that had reduced offensive capabilities as a result. The rate of destruction of these fine works of steel seemed to be quite high and I hoped for either a slower rate to the loss of durability, or an easier way in order to repair them. Did I get my wish? Very much so!

Beta thoughts and the current state of Nioh 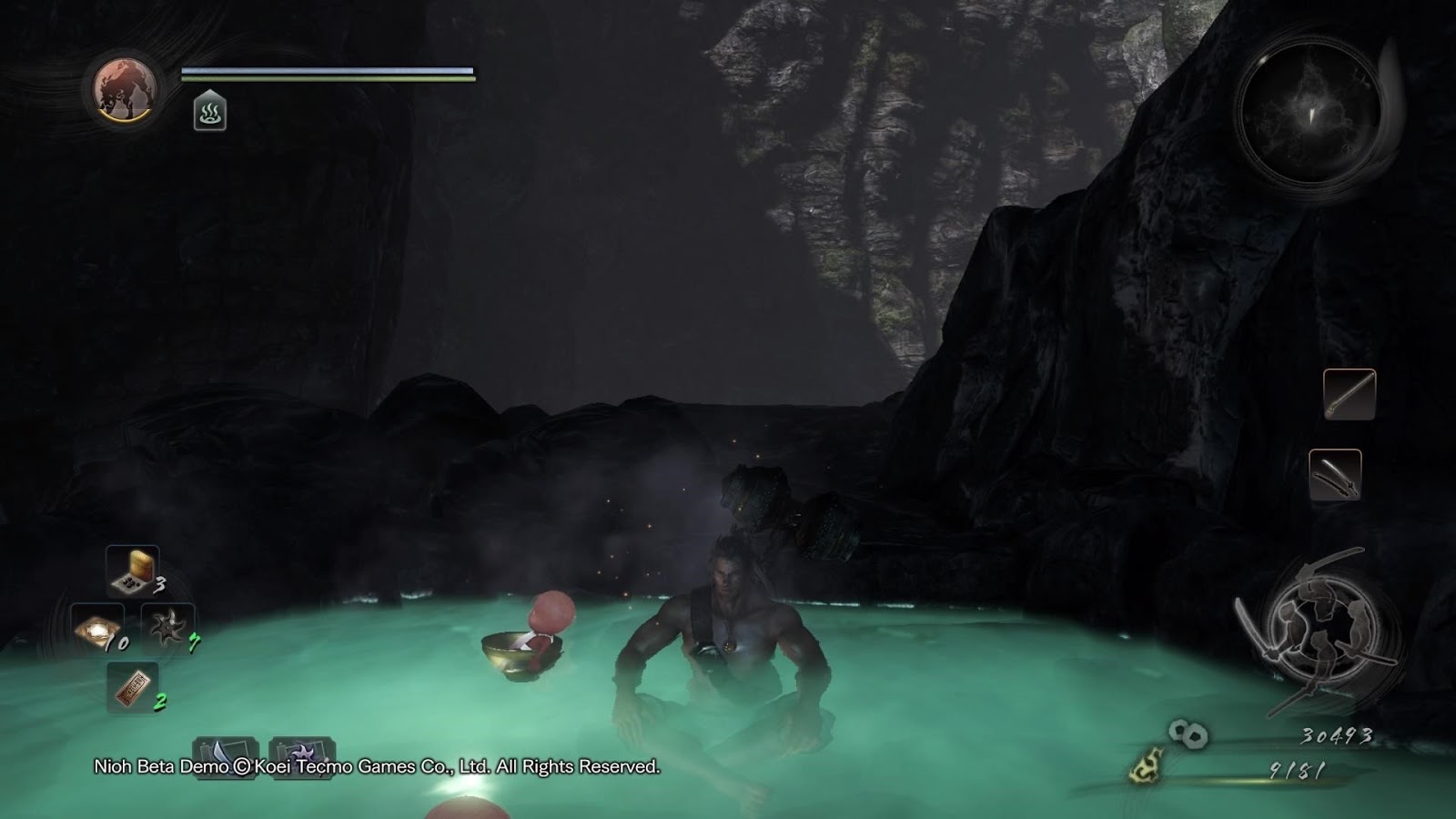 In terms of gameplay and style Nioh feels like the previous version did but there are significant improvements to the overall experience and systems that show just how much the feedback was taken to heart. The Beta itself starts off in the same location of the Alpha with the same flow for the stage. Once the stage is completed though there are some some cutscenes with some characters being introduced such as Hanzo Hattori and then additional locations to explore. While the Alpha provided a second location that looked like it was inside of a temple courtyard, it is now gone and replaced with an interesting sub-stage mountain trail and then the Beta location of the second stage. This new location takes place on winding cliff sides followed by tight tunnel passageways and underground grottos before facing off against the second boss and claiming the Mark of the Warrior.

The biggest improvement, in my opinion, was the removal of the durability that I had so many issues with. When a weapon broke then its combat capabilities were significantly reduced and the same applied to the armor being worn. The new system did away with durability and instead decided to follow a path named Familiarity. Now instead of breaking, weapons become more powerful as William becomes more familiar with them. This not only encourages sticking with a weapon but also makes it harder to swap it out later on as a potentially better weapon will be doing less damage for a time until it feels more natural in William’s hands. With two melee and two ranges weapons that can be used however, everything will become more familiar over time which leads into other interesting new addition. Extra skill points.

Before the only possible way of obtaining skill points was when William leveled up at the Kodama Shrines. While these points are still given out on leveling up, William can also gain new points by using one of the three styles (Samurai, Ninjutsu, and Onmyo) in combat. I’m making the assumption however on the Ninjutsu and Onmyo as I only ever did get more Samurai points. This makes character customization even smoother as even if you aren’t leveling up, you are still being rewarded for your combat performance. Available points that can be spent are displayed at the bottom beside the quick item selections allowing you to decide if it’s time to learn a new skill / ability or wait it out a little longer for some of those six or seven pointers. 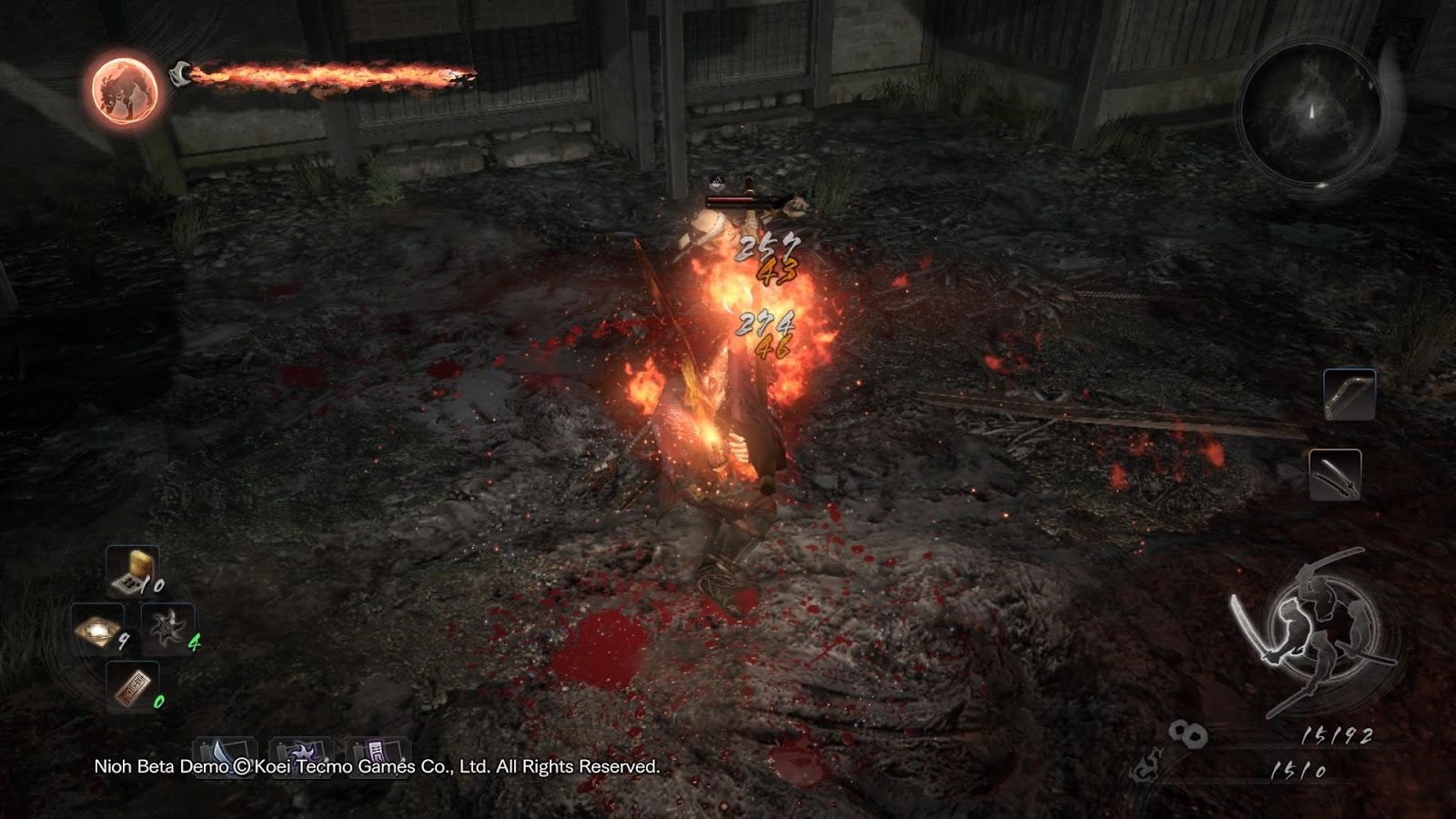 On the subject of assumptions however, there is a blacksmith, and thankfully she has plenty of use for the mundane money that is picked up. The blacksmith now not needing to repair anything, if that was indeed her original purpose, can switch out attributes from weapons in place for random new ones. She can also sell a variety of ammo for your quiver and bullets for your riffles. There isn’t much of a point to it, but she can sell standard equipment or buy any of the extras that you do not wish to have any more on you. This isn’t recommended as extra Amrita can be obtained by donating all of these extras to any of the Kodama Shrines which will also give presents in the form of more healing items or any number of other awesome shinyloot.

Attacking and stances have not overly changed from the original concept. Low, Mid, and High stances are all still present and relevant in either personal flair of situational context such as the demons that hug the ground in which a Mid level stance’s attack will miss. While these have not changed however, the weapons that these used have seen a bit of a change with some interesting new additions. Dual Swords were nice to see as well as riffles that have their own uses beside the bow. I haven’t personally seen a cannon but I think I’ve been on the receiving end and… it didn’t end well granting victory to the revenant that I had summoned. 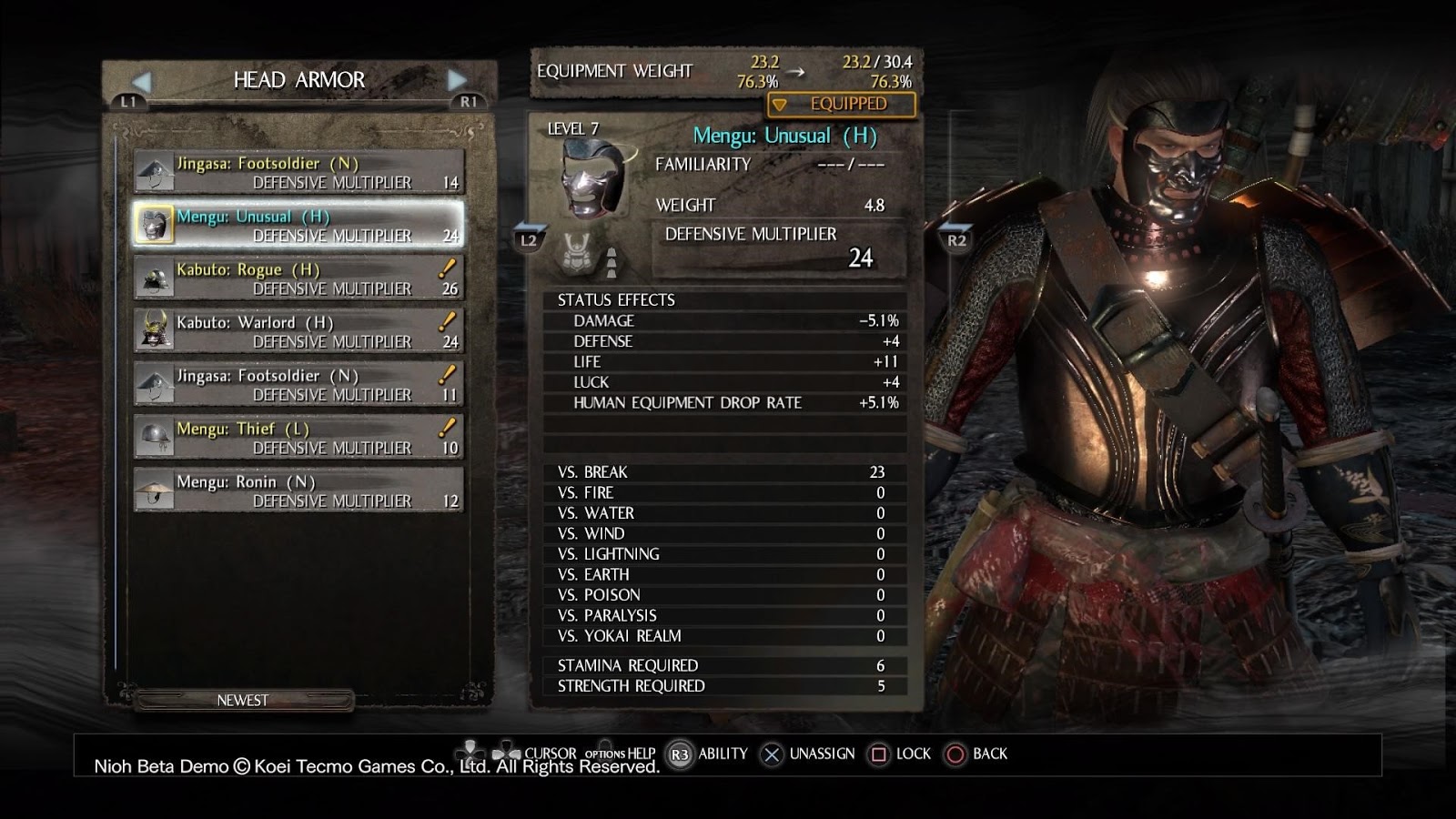 Revenants are still present and more than enough fun to challenge as they too grant Amrita and the possibility of leaving behind a piece of their equipment. Revenants for those tuning in are others players that have fallen in battle. Unlike in the Souls games where it is possible to see another player’s final moments, Nioh summons these phantoms into your world in order to do battle with them. What is interesting about these summons is that it summons how the player was at the time of their death and not as the player is now which allows for several different versions to be fought against with slightly different equipment combinations. I wish I had screenshotted the username of one because I would have liked to thank them for their generous donation of epic purple pants after kicking them off of a very high ledge. William in a Middle stance with a sword can Sparta Kick. So much fun.

Overall though, the improvements from the Alpha into the Beta make things much easier to smooth into. No longer does that first axeman kill you in one shot for starters. A little bit of balancing has been done but not so much as to make things “easy”. Showing off a second boss fight while still having access to the first is also great as the two contrast like night and day. The first is in an enclosed and cramped space against a huge Oni (Japanese Devil) while the second is in a large area against a lithe and very fast moving female vampire who not only knows martial arts and has magical abilities, but she can also knock your ass out with her weaponized parasol. 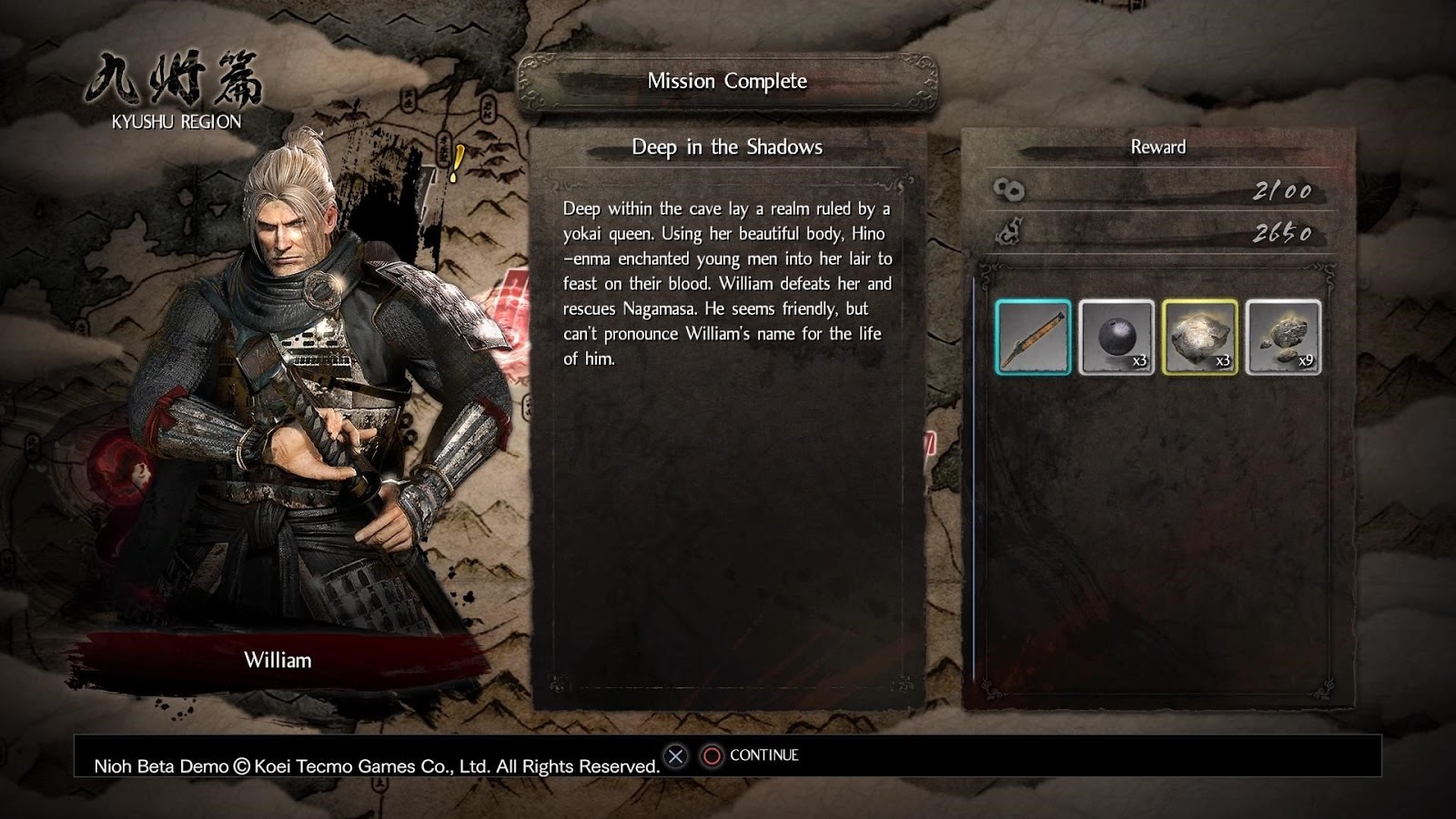 Nioh which was already shaping out to be a hell of an experience is now even better with the modifications that Team Ninja have performed. With multiple stages, sub-stages, and two wholly different boss fights with the second being “holy crap amazing” as it took a few times in order to learn her movements and abilities before finally coming out of that cavern victorious, what’s the rest going to be like? If they need another round of testing then I’m all for it especially after seeing what was done after the first and the optional feedback form. That being said I eagerly await the full release where I don’t have to give up my equipment again! 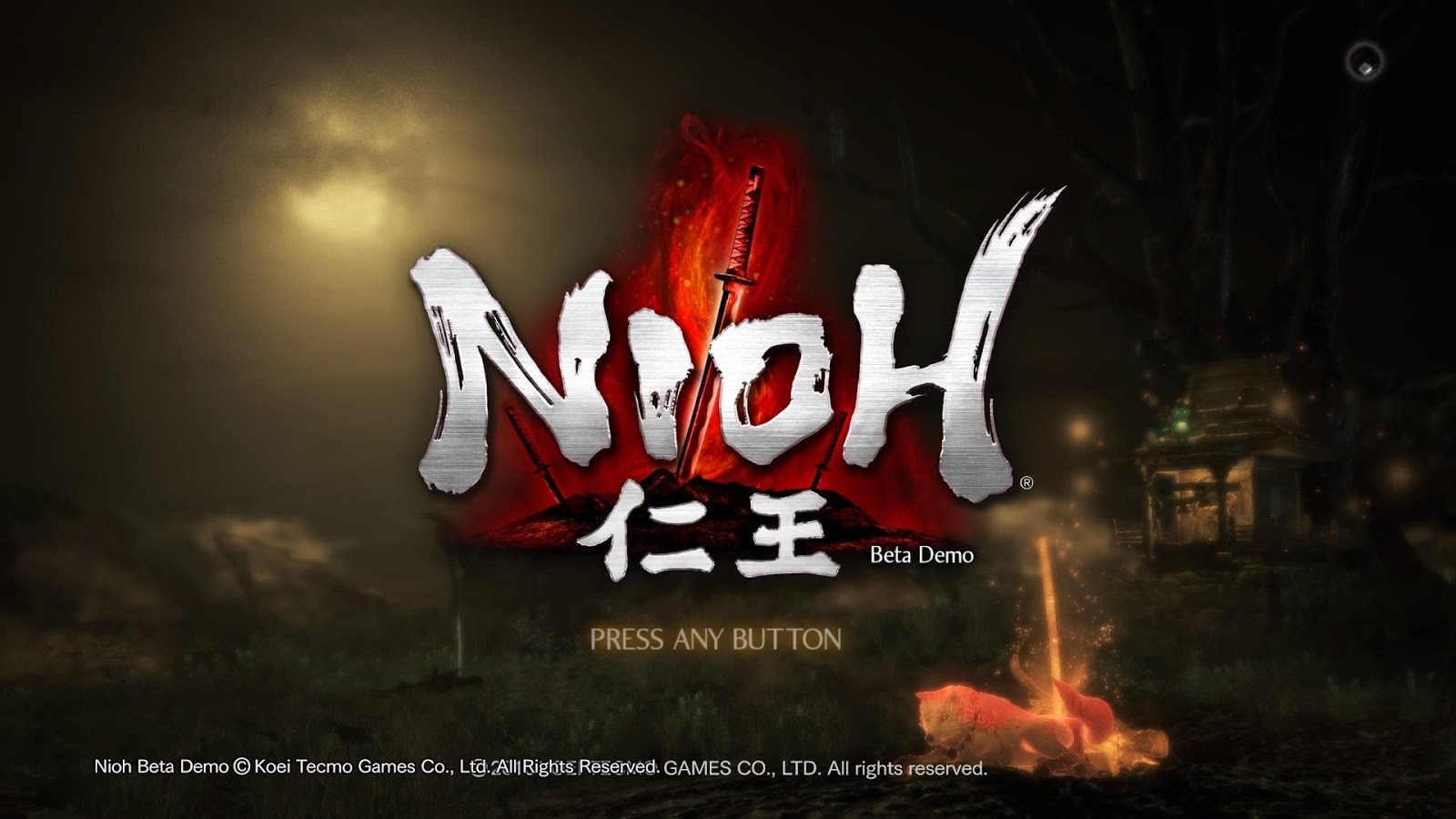