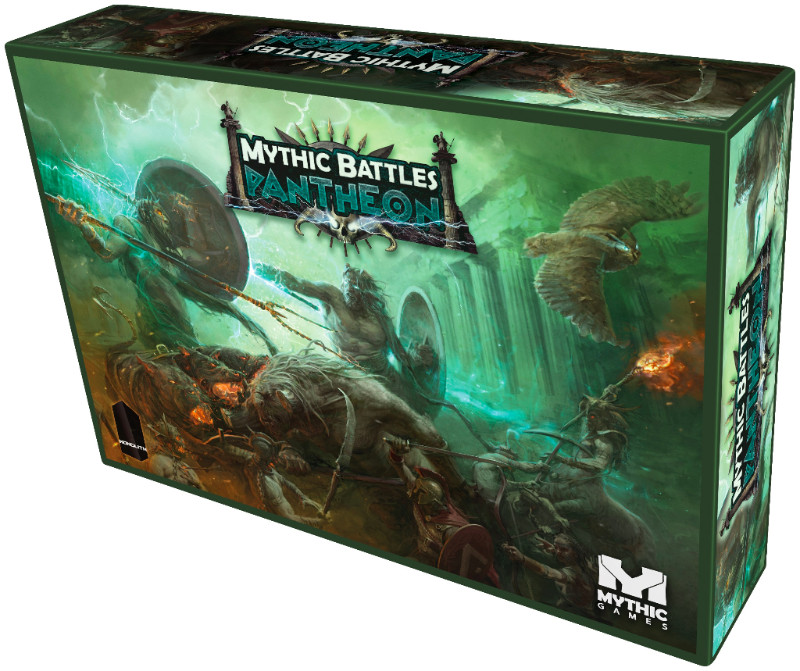 Two different news releases from the same press contact – let’s dig into them:

“Players will be gods in the golden age of ancient Greece as they battle to become the new ruler of Olympus,” says Léonidas Vesperini, project manager of Mythic Games. “We’ve been developing Mythic Battles: Pantheon for more than a year and the result is a truly epic miniatures board game experience!”

The mighty Titans of Greek lore awoke and unleashed a massive attack on Olympus. While the Titans were ultimately defeated, the world was ravaged and the surviving Olympians now mere mortals. As the former Gods awake to a broken world, Mythic Battles: Pantheon begins their adventure through Olympus, Styx and the Labyrinth of Minos to regain the glory left decimated by the wrath of the Titans. Playing as Zeus, Athena or any number of Greek gods alongside an army of heroes such as Achilles and Hercules and monsters such as the Hydra, Cerberus and Medusa, in victory players will be a god.

Backers can support the publishing of Mythic Battles: Pantheon for a $99 God Pledge which includes the game’s base set with 37 highly detailed figures, 13 Character Dashboards with adjustable stat ruler, 10 engraved dice, 2 two-sided foldable game boards representing four battlegrounds (Olympus, Styx, Tartarus and Minos Labyrinth), one scenario booklet and 15 Omphalos gems. 1000 “Early Bird” backers will get the God Pledge at a $10 discount. All backers will receive a Kickstarter Exclusive Apollo, God of Art and Sun, 70mm figure with Character Dashboard and Activation Cards. The Mythic Battles: Pantheon Kickstarter will also offer a plethora of exciting add-ons, stretch goals, bonuses and other exclusive collectibles and items to enhance game play.

About Monolith Entertainment
Monolith is the publisher of the Conan Board Game, which raised $3.27 million in a record-breaking Kickstarter campaign and is currently being delivered to backers. For more information visit monolithedition.com.

About Mythic Games
Mythic Games, based in France and Luxembourg, creates premium board games combining great mechanics, spectacular art and finely crafted miniatures from world-renowned designers and artists and with feedback from extensive public playtesting. Mythic Games is partnering with Monolith, publisher of the record-breaking Conan Board Game, to develop its first game, Mythic Battles: Pantheon in which players will play a god of Greek Mythology to regain their glory and control of Olympus. Mythic Battles: Pantheon is set to launch on Kickstarter autumn 2016. For more information visit us.mythicgames.net.

Syrinscape, creator of the award-winning apps that put the power of custom, movie-like sound effects, soundscapes, music, and dynamic tabletop audio solutions at the fingertips of the gamer, announces today its plans for Pax Australia, taking place in Melbourne November 4 – 6, 2016.

Live RPG Plus
Syrinscape creator and Dicestormers host Benjamin Loomes will lead the Live RPG Plus players – Dicestormer Derek, Dicestormer Nathan, along with actor, filmmaker and contributor to Geek Girl Authority Jessica Hutchinson who joins the party for the first time – through a Pathfinder RPG adventure like none other. In Live RPG Plus, the audience dictates the action and debuting at PAX Australia, the audience will become player #4, voting on the moves of their characters via hold-up cards and Twitter (#LiveRPGPlus). Live RPG Plus takes place Friday, November 4 at 4:30pm in the Dropbear Theater.

Stranger SoundSet
Inspired by the fabulously retro show Stranger Things, Syrinscape is looking for a fan to become the voice of the Demogorgon, plus cries and yells of the teenage heroes and bone-crushing scraps of stunning psionic attacks to be included in the upcoming Stranger SoundSet. The Syrinscape booth #TT610 will be transformed into a recording studio where attendees can step up to the microphone to lend their voices and become immortalized in Syrinscape.

Attendees can meet Benjamin Loomes daily in the Syrinscape booth for tips and tricks on incorporating Syrinscape sound into their game, as well as live demos of the new SoundSet Creator in action as Loomes edits and builds the Stranger SoundSet on the spot.

The award-winning Syrinscape apps bring fantastic, realistic sound to tabletop gaming and are compatible with nearly any mobile device or computer. Syrinscape’s Fantasy Player, Sci-Fi Player and Board Game Player apps are free to download and the official sounds of Pathfinder, Mutants & Masterminds, Catan and hundreds of other sound creations for nearly any tabletop game are available for sale individually or as part of the Supersyrin Subscription for $10/month.

Syrinscape can also be completely unlocked for free for 30 days at Syrinscape.com/freetrial and includes two free SoundSets to keep after the trial.

About Syrinscape
Using a powerful audio engine and complex algorithms to produce ever-changing soundscapes and rich encounter-specific music, Syrinscape conjures every aural landscape imaginable, from ethereal forests and stony shorelines, to dank, vermin-filled dungeons, to the spooky depths of the underdark. Designed by accomplished composer and tabletop gamer Benjamin Loomes, along with the developers at the Interaction Consortium, Syrinscape builds on more than 8 years of prototyping and community feedback. Syrinscape is based in Australia. Syrinscape is available for a wide range of devices, including PCs, Macs, Android Tablets and phones, iPhones and iPads, and the players can be downloaded via syrinscape for free.