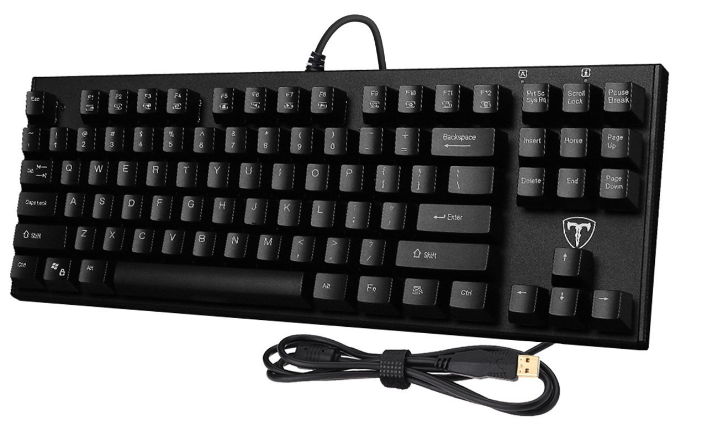 I am generally considered a little guy; coming in at a little under 5 feet 6 inches of pure awesomeness, I do not take up a lot of space. Now contrary to popular belief, smaller folks like me tend to need lots of room and while I like lots of space around me, there is a certain part of me that secretly giggles with glee when the equipment I use also has a small footprint. Enter the TOMOKO I-500 tenkey-less, water resistant Blue Switch mechanical gaming keyboard. It is tiny, and thus, glorius. With a desktop footprint smaller than most modern mouse pads, the I-500 is the perfect traveling companion for on-the-go gamers or people that simply like to annoy the cubicle farm with the amazing “clickity-clack” of the Blue Switch, anti-ghosting keys.

Identical in nearly every single sense to the big sister TOMOKO I-600 keyboard that I recently reviewed, (found here) the only difference being the lack of the num-pad on the right-side of the keyboard. The removal of the keyboard means that the 87-key keyboard is a solid 3 inches or so shorter than the already small 104-key I-600, and while the I-600 is not a heavy keyboard by any means, the I-500 is a downright featherweight in comparison. I love it. 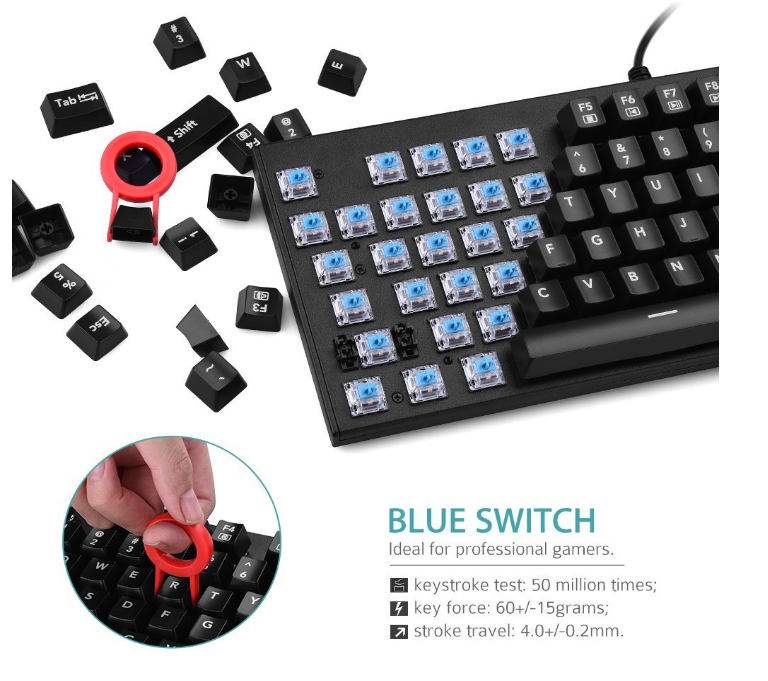 The tiny size, the low weight, the 1-1.5 meter long cord, all come together to be a spectacular little package that fits easily in either of my laptop messenger bags, my laptop backpack, or on my crowded coffee table. The small stature and light weight do not mean low-quality, though I was startled at the weight (no more than a couple pounds) when comparing it, or even the I-600 to other mechanicals, like those by Tesoro or Mionix, as the TOMOKO boards weighed significantly less while providing a solid keyboard structure.

Now these TOMOKO boards tout themselves to be water resistant and while that means they can take some liquid spills, I do not encourage people to go dunking their I-600 or I-500 in the bath anytime soon. I did have a a couple of of real-life “oops” moments with the I-500 though, where a delicious 20 oz. bottle of Vanilla Coke whose cap was not tightly screwed on, as well as a glass of ice water were both spilled on the keyboard within a matter of hours of eachother. The fortunate part? The keyboard works just fine. 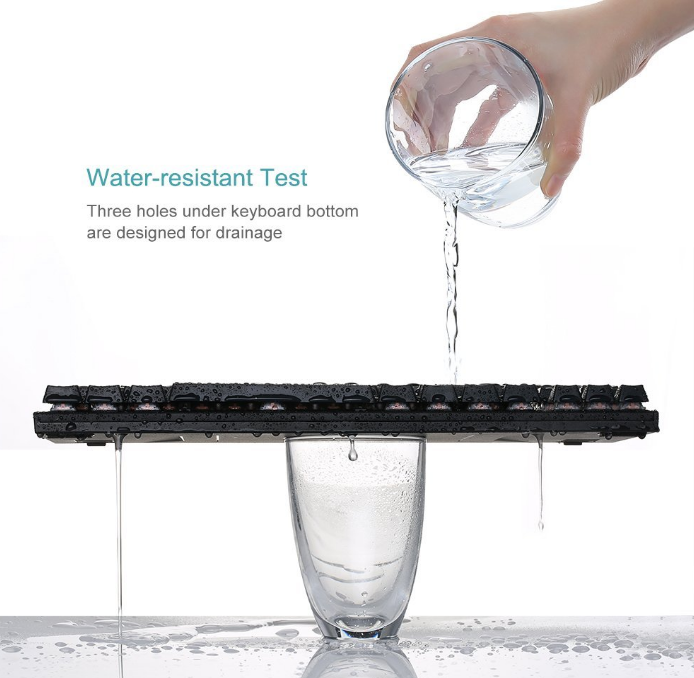 The unfortunate part? Pulling half the keyboard keys off with the supplied key-puller and getting all the Vanilla Coke out was a pain in the butt, on the other hand the majority of the liquid spilled out of the drain holes in the bottom of the keyboard which meant I could spend less time desperately shaking pop out of the keyboard and more time pulling keys off and trying to dry up the vanilla-flavored high fructose corn syrup. The water? Yeah, that was the easy part; popped off some keys, shook the keyboard a bit, and let it sit in the sunny window for the remainder of the day and things were fine and dandy a few hours later.

Spilled beverages aside, the TOMOKO I-500 which can be found here: https://www.amazon.com/gp/product/B01DBJTZU2), 84-key tenkey-less, water resistant, Blue Switch mechanical gaming keyboard is incredibly cost-effective, small in stature, and best of all? Reliable. I fully intend on purchasing at least two more of these tenkey-less keyboards to hook up to secondary computers at home, as they are small and affordable while providing spectacular anti-ghosting and a musical “click” with every key depression. 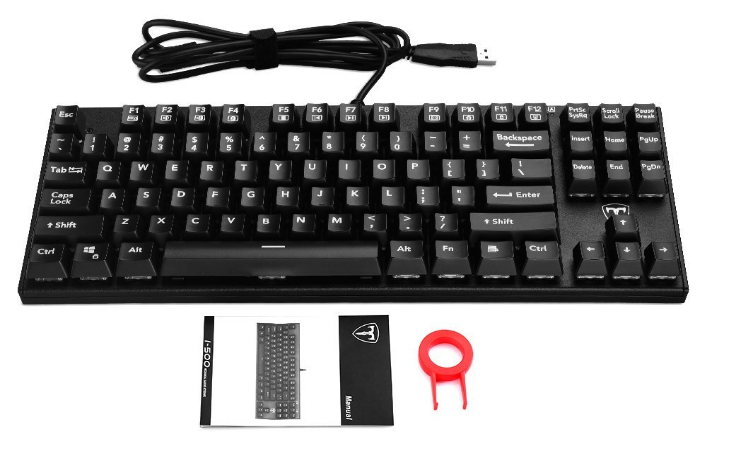 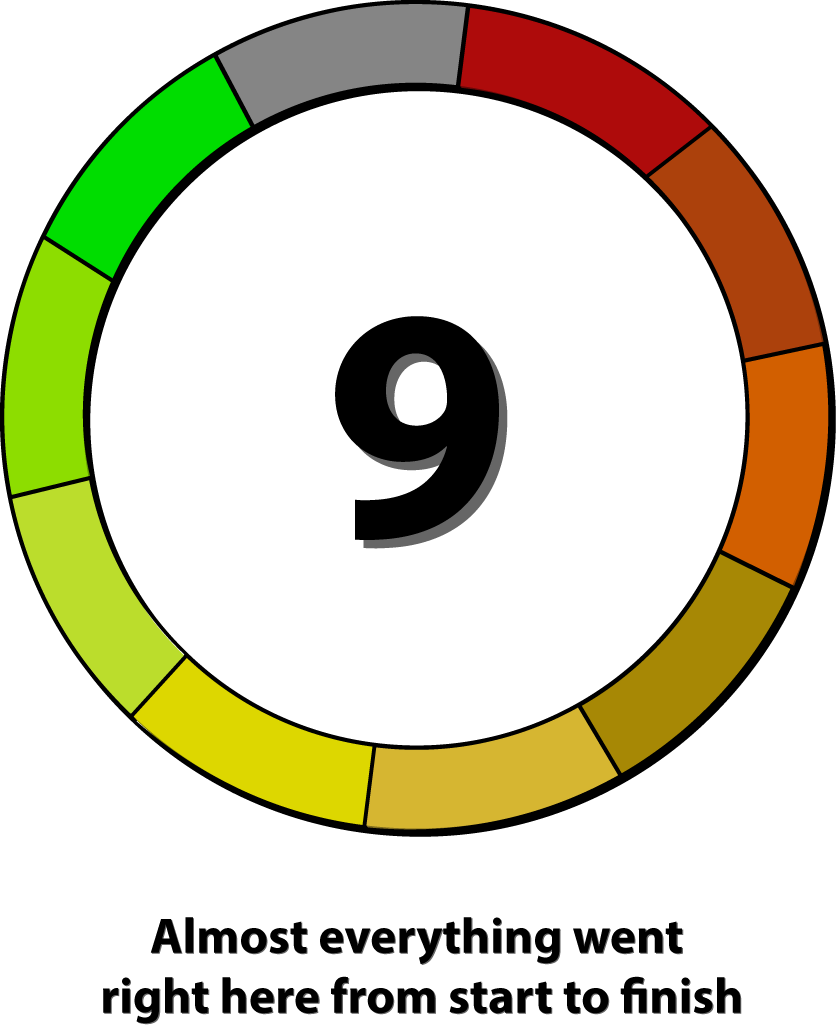