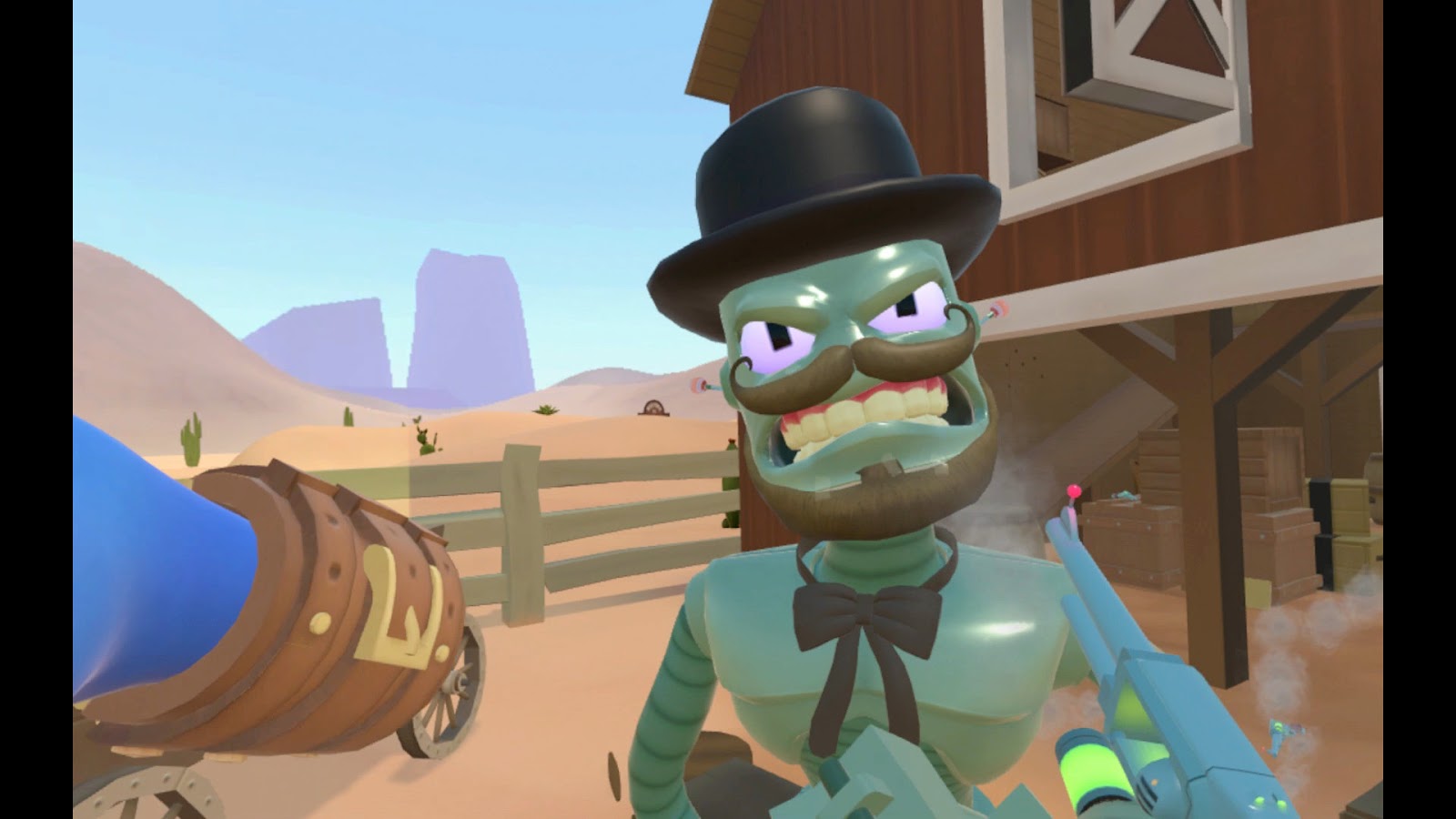 Cowbots and Aliens is an often hilarious battling game that gives you an incredible number of things to interact with in the environment. You will absolutely destroy most of the stages in the process – and that’s just fine. In fact, that’s what the development team hopes will happen. The biggest drawback is that this is a small title that relies on finding online multiplayer matches, and that could be a problem when the game finally releases if more people don’t discover this little gem first.

The cartoony, charming and frankly hilarious Cowbots and Aliens makes a spectacular first impression. This is a room scale title that wants you to move about, to interact with your environment. You have to stand up and move around. In much the same way as some other titles like SUPERHOT VR, you have an opportunity to use more than just a gun in your hand. Flip tables over for cover or pick something up to attack your opponent with.

As with any sort of online multiplayer game of this nature, you have a few different modes – none of them terribly original. Capture the flag-style gold hunt, deathmatch and free for alls. But it’s not the modes or even the gunplay that make Cowbots and Aliens so entertaining. It’s the environments that you can hide in and take advantage of to take on your opponents. In the process, you will absolutely wreck the place – and that’s just fine. 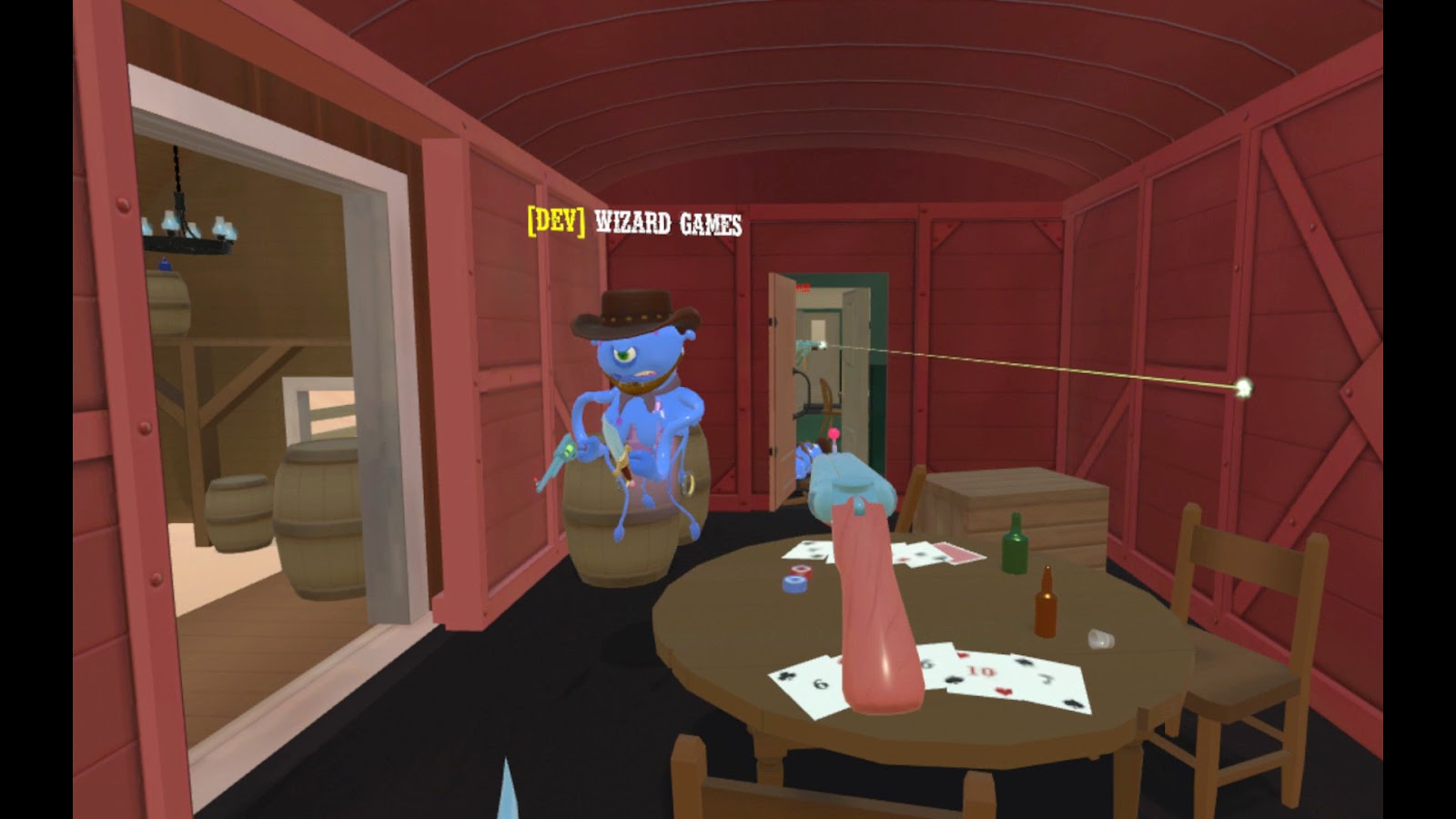 The overall theme has a Wild West vibe, despite the very un-Wild West aliens and robots at the heart of things. The characters are brightly colored and goofy-looking. You can’t take any of it series, and that goes hand-in-hand with the simple sound effects and music as first. Because it tracks movement, controls are really intuitive. The way the game progresses is pretty amusing. Run out of proper weapons? Find a glass and chuck it. The overall concept is a blast.

Now, the primary concern / negative: you need to have people to play it with. I have been struggling to find matches. I got lucky right out of the gates, finding a couple of people in the lobby in the early evening and getting a few games in. I was new, so I fumbled about and just felt like I was getting the hang of things when they had to take off, leaving me in a lonely lobby to putz around for a bit. Sometimes people hop on, most of the time they don’t. For a game that relies on multiplayer to be played, this is somewhat concerning. If you have friends who enjoy this type of title? Bring them on in, because it is a riot to play. I have a buddy I have been playing it with, and this is probably the most fun we have had in a multiplayer title since we were kids playing the NES on our couch. There is that kind of appeal here – and it’s great because the two of us live in different states now. The couch is not an option and Cowbots and Aliens nails that competitively playful aesthetic. 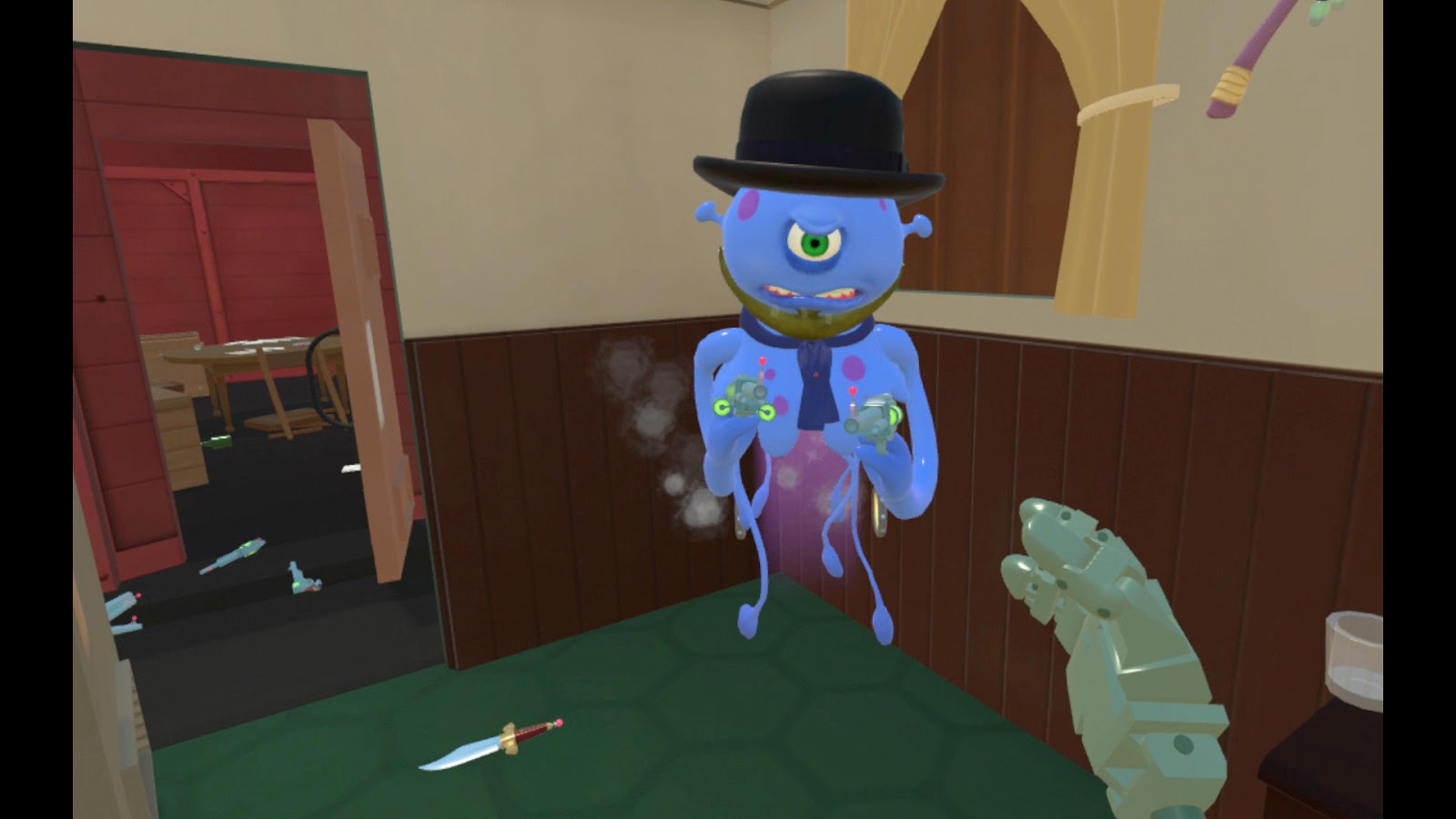 Being an Early Access title, there is some room for improvement, despite how well-polished the overall game is. Sure, the chunky graphics could offer more animation and detail, but you know what? They don’t have to – it’s still quirky and charming. However, more variety in characters and maps would certainly be welcome here as well.

Cowbots and Aliens is a stable game that makes outstanding use of the virtual reality hardware. There is a ton of potential here and even though this is a preview, what Cowbots and Aliens provides is still a very good experience. However – one of its greatest strengths: the ability to interact with other players on a very flexible level – is also a potential weakness if the user base does not grow over time. Without any sort of storyline or single player content, you are at the mercy of other players happening on when you do. This would be mitigated by getting some friends to play with you – in fact that is probably for the best because Cowbots and Aliens is a riot.