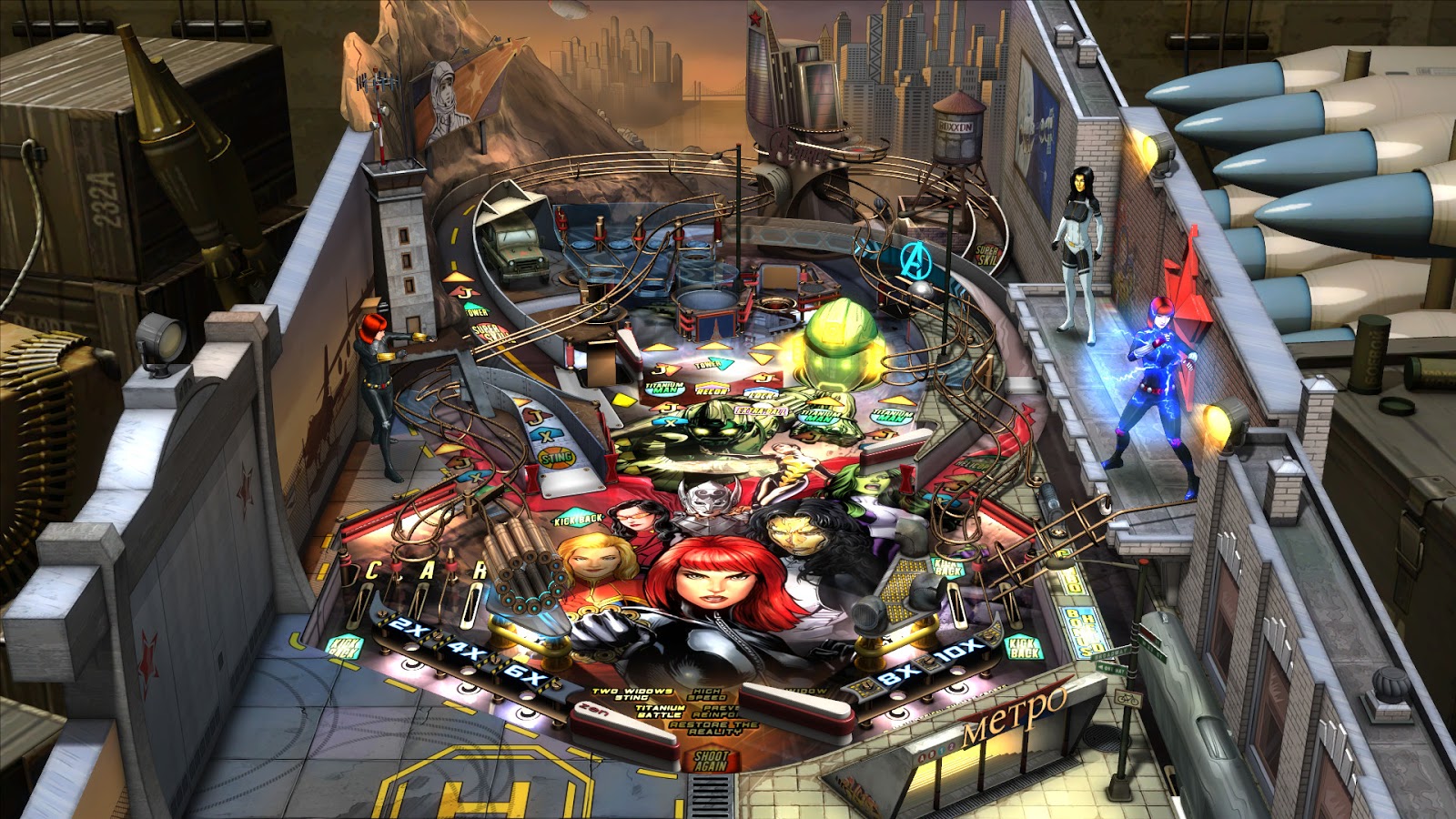 Zen Pinball is frequently releasing new tables for their core game, and while some fare better than others, all of them are of high quality. In the end whether you like a particular table probably comes down to a matter of preference. For me, these are both good but not great tables that continue to use the Marvel license in an enjoyable way.

Most table packs include three, so it was a slight bummer that Marvel’s Women of Power only featured two. The first of the tables I played was an alternate reality A-Force table that features Black Widow and Madame Masque. Things get off to a promising, unusual start with a bit of an introductory scene that shows the two women battling it out over a cosmic cube while descending through the air. They find themselves in an alternate world where the most notable characters here are women, and they even run into alternate versions of themselves.

To this end, the storytelling aspect of the table is unique and very cool. The concept that the women are in an unhappy alliance of sorts to figure out how to get home. Where this attempt at some thin narrative gets somewhat grating is in the often-repeated lines of dialog. I’m not sure what the exact ratio here should be, and it’s something of a theme I have noticed in Zen Pinball tables of late. Early on I was thoroughly enjoying the commentary, but by my fifth or six game, it seemed I had heard just about everything there was to hear – repeatedly. 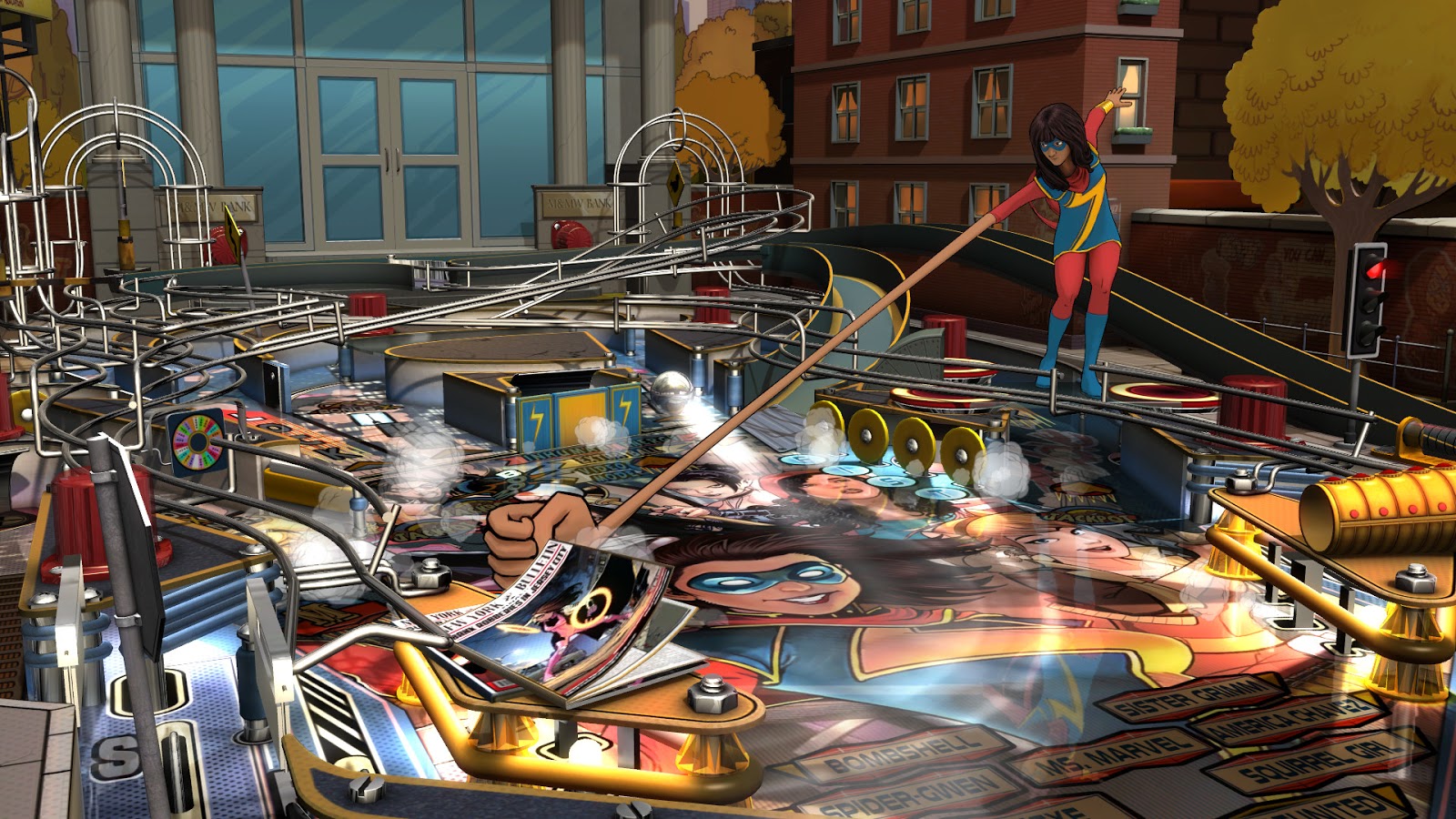 As for the table itself, I like the layout. It is a very vertically long table, with some ramps on either side and along the back with lots of opportunities for action along the top and center middle. It can be a little tough to nail some of the extreme side shots, and the table itself plays very fast which doesn’t really make the risk of failure on those worth the reward very often. Of course you have a handful of cool scenes that break out and are tied to mini-games / quests within, and that only helps to further the narrative feel to the table. As for the appearance, the colors are great, with a lot of steely gray along the sides but some bright shocks of color throughout the table itself.

Next up we have a table themed around a younger group of women, the Champions. Similar to the A-Force table, there is a quick bit of story to kick things off. Here the content is much lighter fare, reflective of the comics and the characters. Instead of worrying about all-powerful cubes and alternate realities, we find Ms. Marvel (Kamala Khan) opening up a cafe. She has her day’s earnings in-hand when Bombshell robs her and takes off.

Whereas the other table looks sharp, the Champions table has more personality to it. Lighter colors and better yet great use of Kamala Khan’s stretchy super powers make this a much lighter affair (ball saves consist of Kamala reaching out with her elongated arm, and snatching the would-be doomed pinball up and dropping it – quickly! – onto one of your flippers). We have the same long look as the prior table, but it plays very differently. The ramps here are scrunched much closer to the center of the table, effectively chewing up space and making the overall playing field shorter. To be honest, this type of table is usually my least favorite in Zen Pinball releases, so it came as a very pleasant surprise that I enjoyed this table more than the A-Force one. 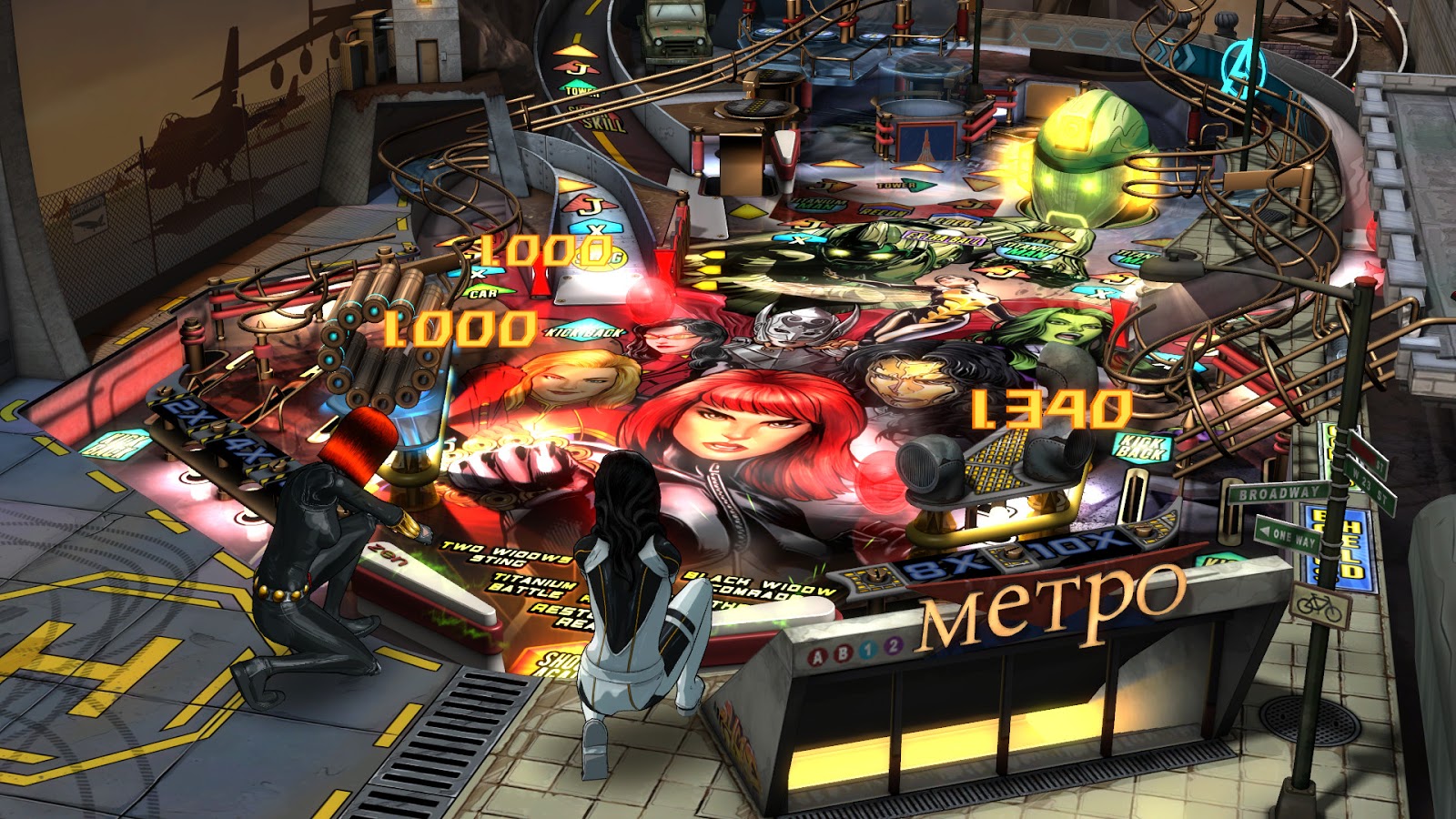 Scoring here is easy – probably too easy. My second match saw me break 108 million points and the session itself lasted about half an hour. Subsequent plays might not have racked up quite as many points or time played, but this is one of the easier tables in the Zen Pinball stable of tables. Like the A-Force table, things can be repetitive here, but not as egregiously so. That table sounds great and I never found it grating despite how long my play sessions on it were, despite the high-pitched Squirrel Girl’s voice or multiple references to Spider Gwen who is seldom actually seen doing anything.

With numerous Marvel tables having been released over the last few years or so, I have some favorites. Neither of the two here in Women of Power will be at the top of that list, but both how the usual Zen Studios polish and excellent overall table design. Of the two the Champions table was my favorite and both are a solid experience.