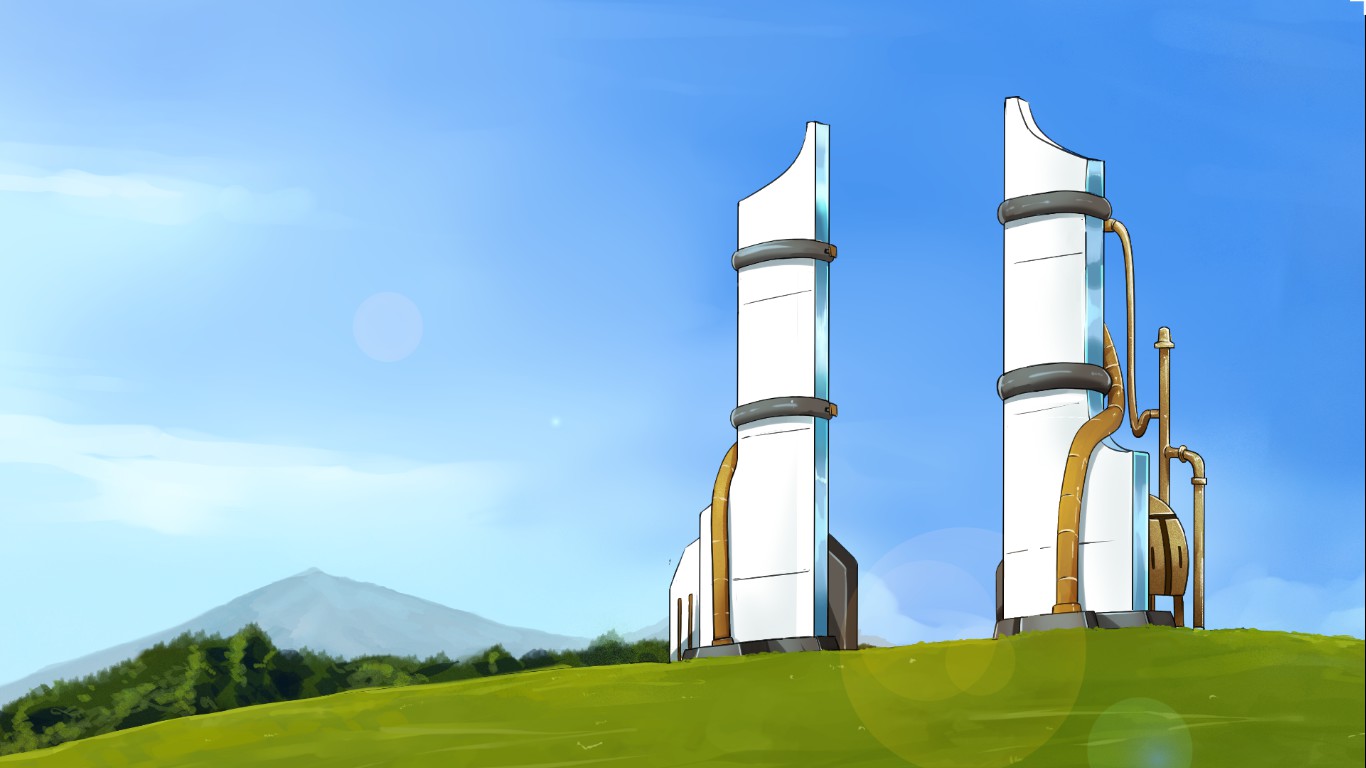 So when it comes to dating… let’s just say that I don’t really know the first thing. If you really want to confirm? You just need to ask Breanna. We never really dated and then suddenly it’s almost five years later that we have been living together. So when it comes to a Dating Sim, involving dragons no less, the level of depth that I was out of seemed insurmountable. Thankfully, your eyes and ears of this world is a rather smooth talker with both the men and the ladies. The only catch is that you’re here for a reason and because nothing is ever easy as there is a serial killer on the loose.

The planet Earth has gone to hell with solarwinds having fried just about everything that had brought Humanity into its Golden Age. Having discovered a portal, a part of Humanity views it as their last chance to save a city that has walled itself off from the outside chaos. The city is running out of power and whatever can be found on the other side of the gate is all that stands between the cities survival and it being torn to pieces by those living outside its walls.

Humanity one day found its answer. The portal connected with another and messages were passed through. Not long after a deal was made. Information for power generators. Sending one human through as an ambassador was nerve racking enough while waiting for answer. Suddenly word comes back. He’s alive, he’s well, but he’s the only human as the race on the other side is a race of Dragons that evolved in a similar fashion to us. Equipped with a few PDAs of the information payment in order to receive the power generators, you prepare yourself to cross through the portal and meet this other race as a symbol of your own. 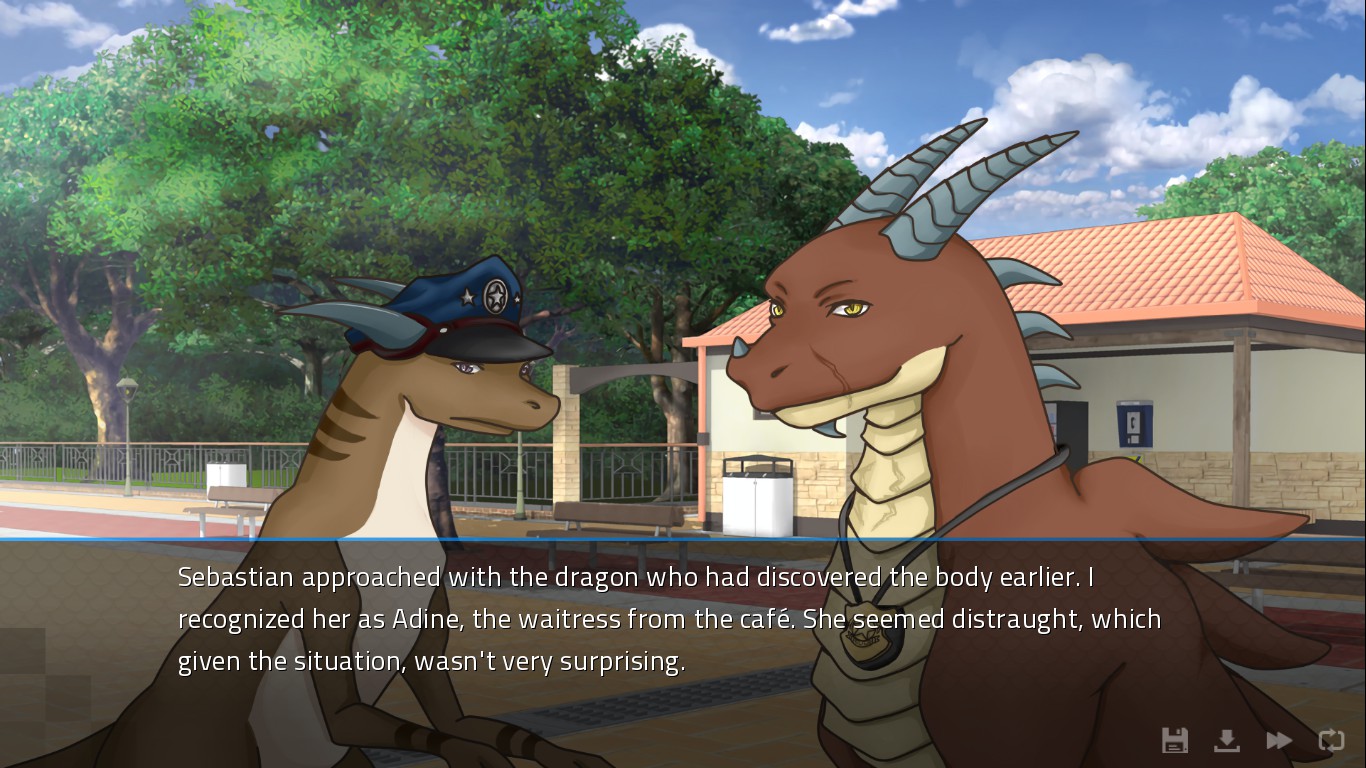 After stepping through this portal the rest of the adventure is what you make of it. There’s an overarching plot but everything else relies solely on your choices. Who do you talk to? How do you talk to them? Are you nice? Are you an outright ass? What I thought was interesting is that in certain cases even nothing was an option. You had the choice to simply sit around and read a book instead of getting to know the people of this world better.

Angels with Scaly Wings was all kinds of interesting. Visual Novels themselves are still new to me as it’s strange to even call this “playing” as much as it’s experiencing something that has been well crafted. The dialog is well written and it flows easily between the various characters involved. Taking things a step further is that each character is associated with a color to even further help the distinction between them. Even the cast are varied from a Grocer / Bartender to a Genetic Physicist and a Police Chief. Adding in a Cafe Waitress, a Disgruntled Police Officer, a Secretary, and a Minister and things can get interesting as long as you let them. This mean not staying inside on that comfy looking couch all day.

Visually the experience is easy to look at. Soft colors are used and the visual designs of the Dragons are very well put together. It was nice to see that each character had differences such as smaller ones with longer arms, Wyvern types with no real arms as they are part of their wing spans, wingless dragons that were hulking masses of muscle. They had different designs, they had different colors, they were different. Like our own race that comes in a variety of shapes, sizes, and colors, so did theirs and it was a much more believable experience because of it. 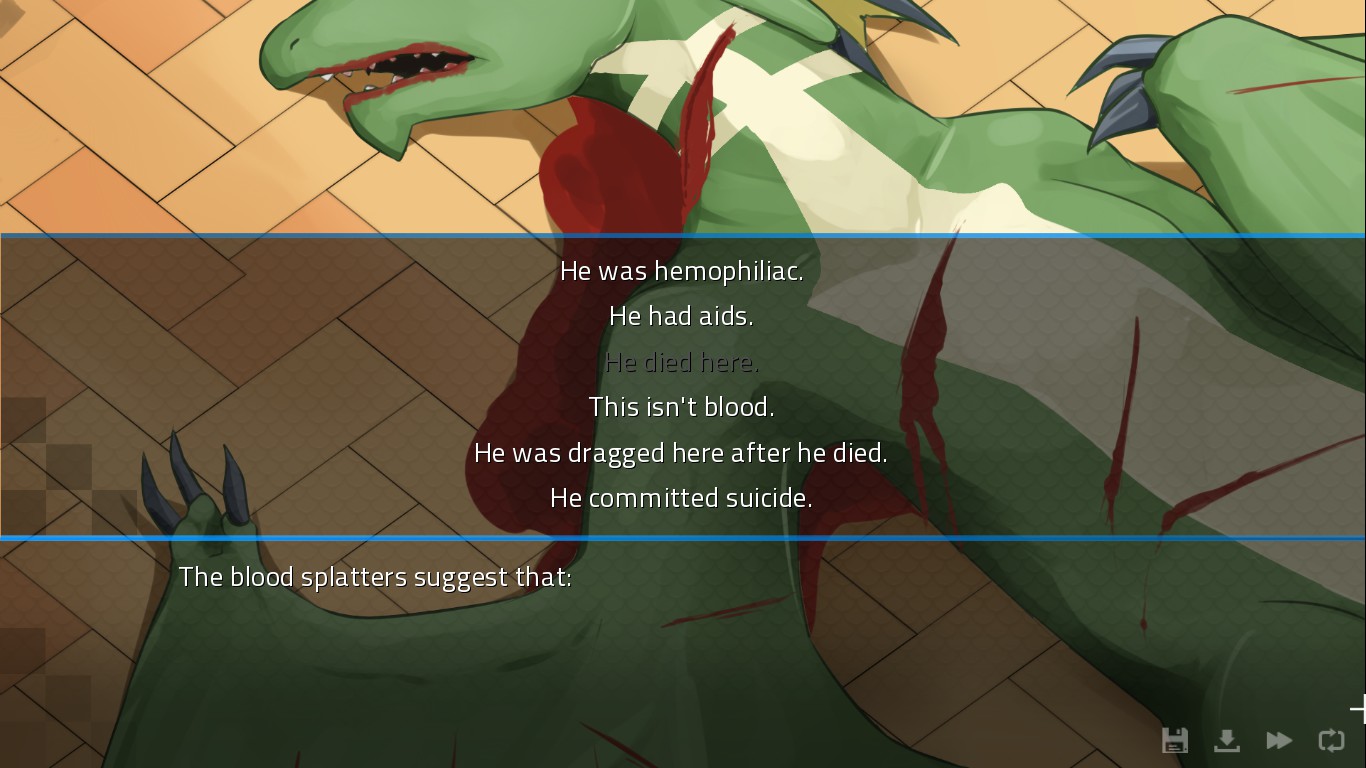 Not everything is pretty in this world however. It has some of the same problems that ours does and the occasion to help does arise when you are offered for an input to help out at a crime scene. Several of these come up and you can be as serious or as ridiculous as you wish. If you want to help them picking the right kind of answers will help about the location of the murder or possible weapons used. Those involved will appreciate you more for your cooperation but like the rest, that’s up to you and how you feel about lending a helping hand.

Mechanically there’s one feature that I have to praise the developers for and a lot more even in non-visual novels / dating sims should use. Using the spacebar to move a conversation forward would move the conversation forward but if a choice appeared it would not simply move it along if you accidently hit it. The famous “well shit” moment in which you aren’t even sure as to what you said can’t happen. To enter a choice you had to either hit the Enter key or use the mouse on the selected choice. This boils over even to the tablet mode, if your laptop has one, in which touching the screen to move forward will move it forward but it requires clicking on the actual choices to make them.

Angels with Scaly Wings is a great experience to sit down to. Visually appealing artwork is supported by well written text that flows from one chapter to the other. Having several choices in order to pick from was simply a bonus with the mechanics that are designed to allow you to pick without accidentally choosing something you wish you hadn’t said.