comments Share
You are reading
Dance! Everybody dance! – A Pit People Preview

Ssssssssooooo… Hi. Doing a preview for an upcoming or early access game often has its pros and cons. Pre-release versions of ANYTHING mostly bear good and ill news, in that a product might be a terrific idea, but is plagued, in its infancy, with feature-less segments, crippling bugs or severe balance issues (I’m guessing this is why children don’t have a pre-release version available – they’re messy enough in full-release, and I mean, ew).

But once in a while, you get this gem, this thing of beauty that goes beyond your expectations, that grabs you by the metaphorical gonads and Just. Won’t. Let. Go. 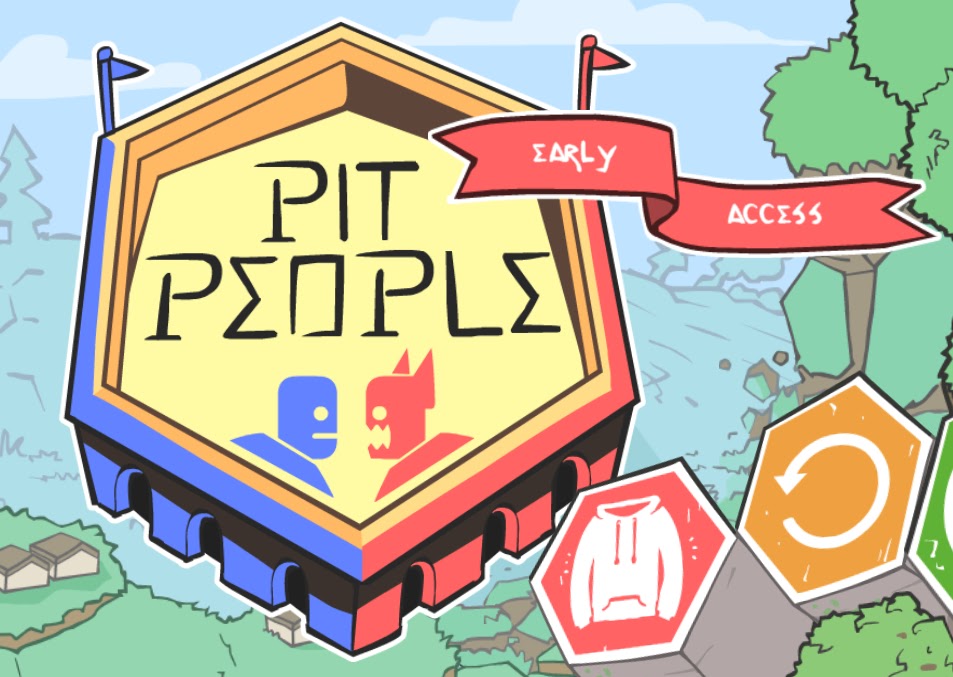 Pit People is one of these gems. A weird, hexagonal precious stone, ready (it seems) to be carved out of its primordial rock and thrown in your jewel collection. I don’t mean this lightly. It’s already quite fricking shiny, and I pray to the digital entertainment gods that its multi-faceted, sparkling form maintains its appeal, value and, so far as I can predict, longevity. (I can predict this because, as we know, diamonds are forever. Thanks, Mr. Bond.)

I’ll start with a negative point, and perhaps the only major one I have so far: it’s early access, therefore incomplete. Even though The Behemoth advertise what’s available as “a sizeable chunk of the story”, even yours truly, a family man without as much gaming time as he’d like, got to the end of the pre-release content pretty quickly. But then… That wouldn’t be a negative if the game actually sucked, now, would it? So, chalk it up as a collateral to my very positive impressions about the game!

On to the actual preview.

If you’re familiar with anything Behemoth’s done before (Alien Hominid, BattleBlock Theatre, Castle Crashers, to name them all), you know right off the bat what to expect: simple, yet quirky graphics, simple, yet deep gameplay, and hell, that Behemoth aesthetics and weird-dom. Everywhere. 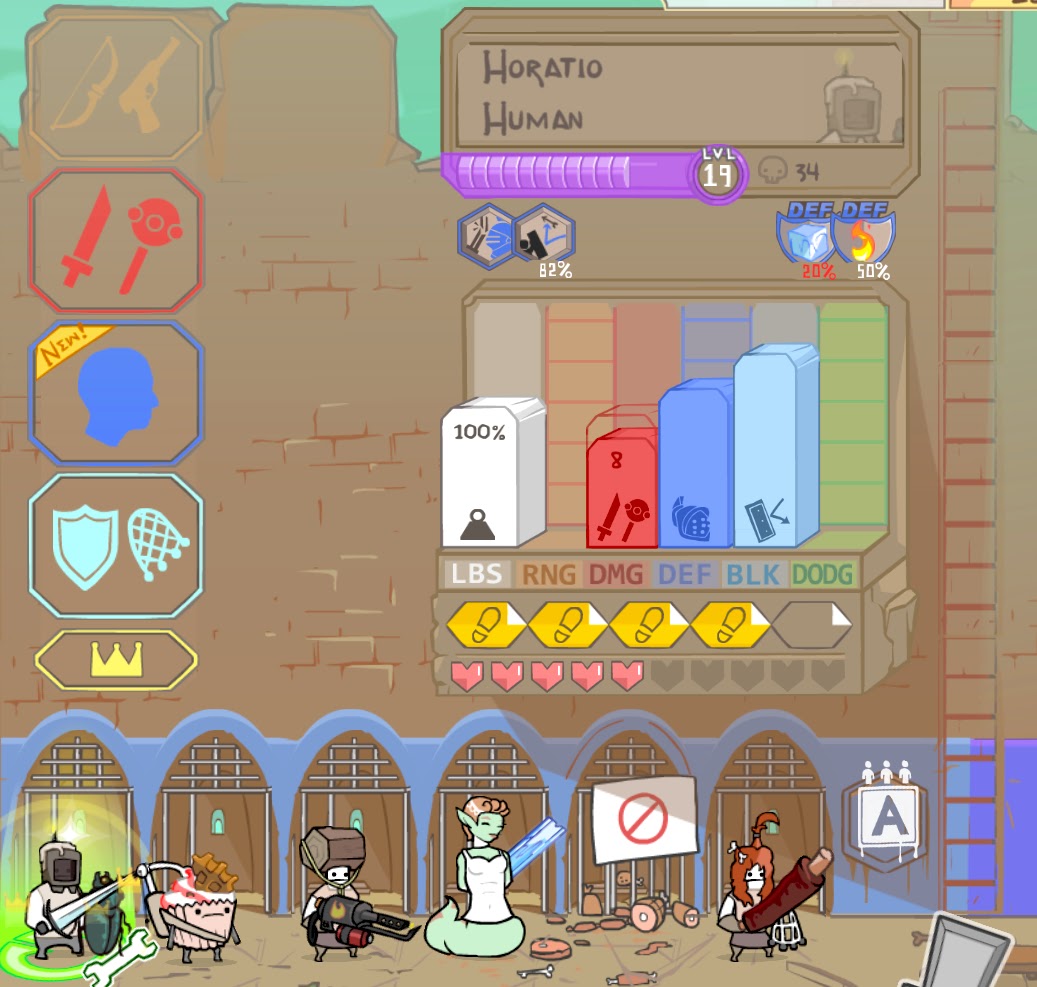 [Don’t say weird to their faces; they’re very sensitive. Except the snakelady – she just mean.]

Starting with the graphics and visual design, because I’m writing this, so suck it up. Although it won’t break screens and melt graphics cards, Pit People certainly manages to distinguish itself from other games in the industry, AND from other Behemoth games. Granted, you’ll find the characters familiar (even moreso if you equip the Castle Crashers helmets on your guys), but as you’d expect, the game has its own visual vibe, uniquely weird and cute, and just plain fun to look at. For seemingly “basic” designs – basic in that Behemoth way: characters are, for the most part, black and white, colors provided by their equipment only, and their features are drawn very simply -, all of the characters have tons and tons of personality. That’s nothing surprising, considering Dan Paladin et al.’s pedigree, but it’s not any less worth mentioning. Every Pit Person you’ll meet is ready to throw all of its charm at you via your screen. And then smash (monochrome) heads.

Sounds are, much like their eye-candy counterpart, stellar. Character voices, albeit not from any recognizable human speech, are cute, funny and endearing. Like chipmunks without actual words, but with attitude. The music complements this in such a fashion that you’ll find yourself tapping your feet without ever meaning to – hell, even the buildings in town are honest to goodness DANCING (and there’s the explanation for that title). Not kidding: all the dwellings and various locales in town are bouncing to the technofunkish beats that drape the game, from start to finish. It not only flows well with the rest of the game’s overall design, but it also carries it, somehow, from an already fun place to be to what feels like the coolest private gaming club in town. I mean, just listen to THIS: 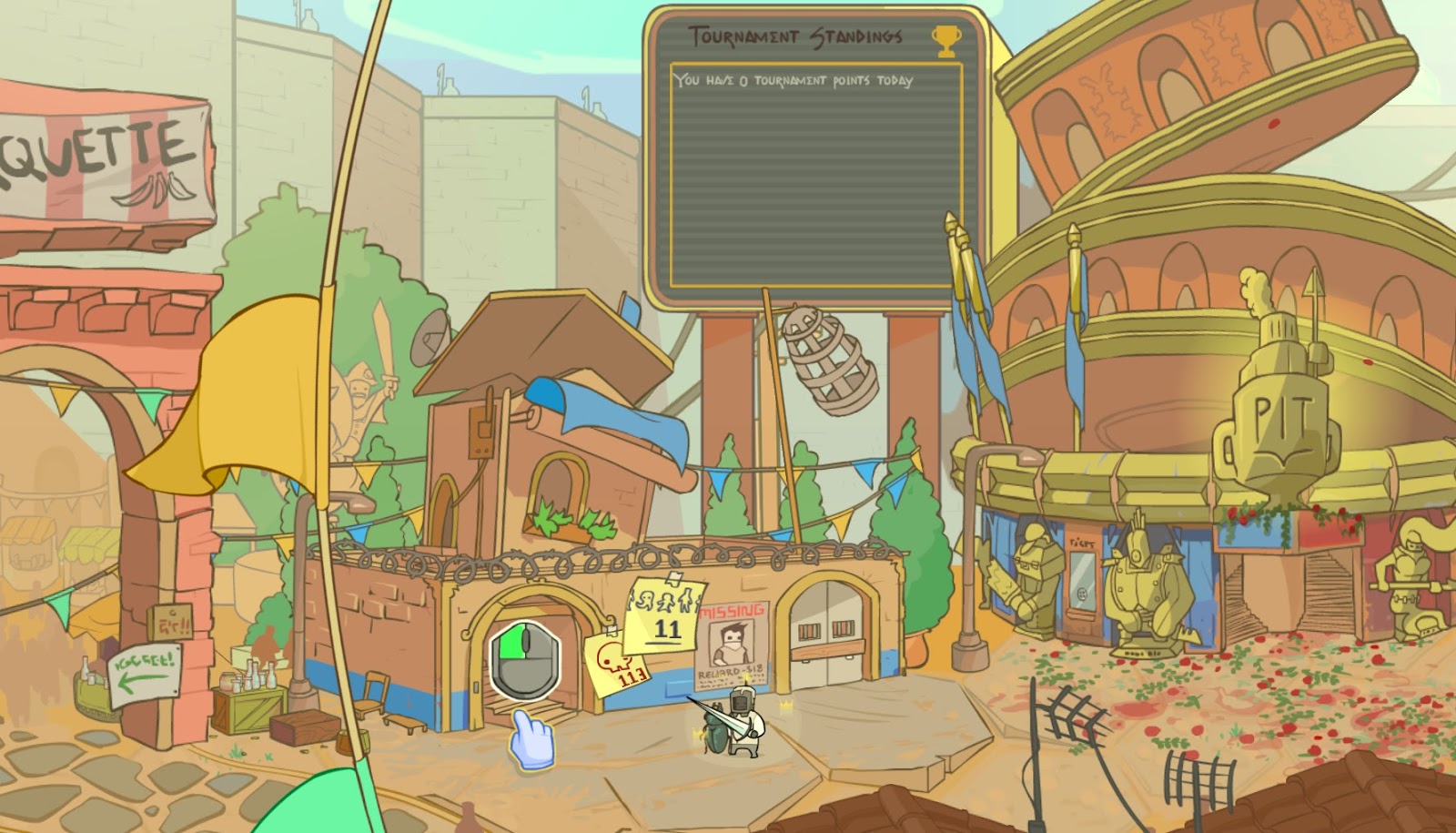 Gameplay, now. Boy, is this game FUN. The depth of strategy and the almost endless variety in team composition guarantee that you’re gonna want to shuffle things around a lot, trying out new “builds” at every turn. This might be just for funsies, or simply because the harder fights will make you WANT to switch things up. For example, you’ll want to equip your group with blunt weapons for those encounters with lots of helmets, since the latter are very resistant to swords, but suffer extra damage to heavy things that go “CRASH” instead of “CHOP”. Humanoids can be outfitted with an incredible array of different weapons, shields, helmets or headgear, ranged… things (throw some explosive olives, why don’t you?) – point is, there are a LOT of possible combination for humans. Non-humans (robots, pixies, and much more weird and funky critters) also have their share of customization, some of them sharing items with their human counterparts, further ensuring that the chances of you showing the same team as another player are abysmal to none. Balance being, as always, essential to a good comp, throw in a cupcake healer in the battermix and you got something good going. Did I say “cupcake”? Yes, yes I did. 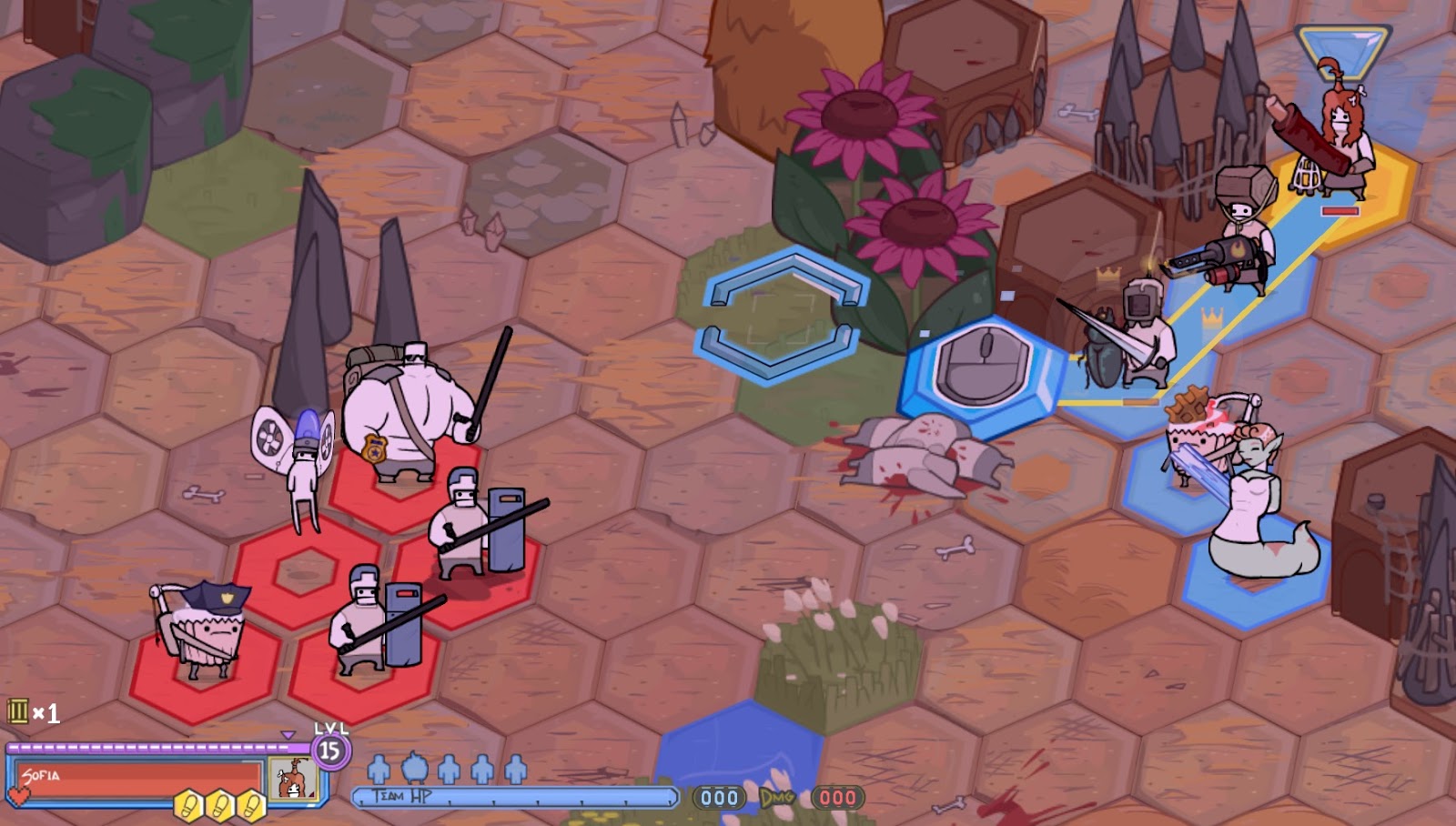 [I fought the law and the law DIED!]

The main thing you’ll be playing, at least at first, is the story mode. And so far, I’ll be honest, it’s looking good. Yes, the overall gameplay and its sheer variety help, but the main characters are so endearing, and the story line so wacky that just following on everyone’s antics will keep you, if not riveted to the screen, at least very entertained. This is due in large part to the narrator/ antagonist (no spoiler here – you figure this out in the first 2 minutes of play) and his oral rendition of your adventures. His tasteful commentary of your every action and enterprise is at times thigh-clapping funny, undies-wetting hilarious, and “replay-inducingly” witty. Horatio, the “hero” of the story, goes on his quest for vengeance and survival, all the while being harassed and taunted by this all-seeing entity, with his booming voice and kickass delivery. Having this sarcastic, evil angel constantly just behind you make each and every step of the way that much better, whether you’re on the world map or in battle.

Back in town, you find the usual: the Pit, your homebase, a couple shops. Nothing really out of the ordinary for this type of game, really, and everything is pretty self-explanatory. As a sidenote, though, your FIRST foray in the city will be something to remember. Not telling why. It’s just… mind-melting.

Outside of town, navigating the map is cute and fun. You take your little wagon, stuff your party inside and start exploring around you. You can see enemies roaming around on the map, so you can avoid them, of course, or render them unconscious by shooting (I kid you not) rockets from your cart. In co-op mode, one player controls the cart, while the other controls the rocket-launcher; that way, no one sits around enjoying the ride, which actually makes the ride that much more enjoyable.

Speaking of co-op mode: engaging in battle with a player by your side means you get TWO parties to tackle baddies. While this DOES seem to make the game a tad easier, it also provides for shenanigans in battle, where you have make sure, for example, that your area-of-effect warriors don’t start raining doom on your allies (friendly-fire galore, here, for better or… betterer). This co-op madness actually helps prevent the game from being too easy, which would take away from the fun – unless you do enjoy simply steamrolling down a game’s campaign unopposed.

If you’d rather go the other way, scrap the campaign and just smash heads, then the titular Pit is for you. This is where you can challenge other players to duels, or 2v2’s, and also take on harder teams of AIs for gold and bragging right. Though I’d encourage you to consider going the co-op way against the buffed-up AI teams, feel free to go solo or duo in VS. Both modes have their charms, though it should be said that VS mode has global chat, so you’re exposing yourself to potential trolls by heading there. Just saying. The Intarwebz CAN be a mean place, kids.

Wrapping this up, here. Because yes, I believe Pit People indeed IS a gift to the gaming world (gift… wrapping… yeah), or at least it’s shaping up to be. Its appeal, style, quirkiness and extremely diverse gameplay, alone, would make it a recommendation, but the Behemoth touch, through the narrator and the truckload of personality the game exudes make this one a special kind of game.

Whether fighting against other players is your bag or not, give this one a try; you’re really going to enjoy the cart ride!