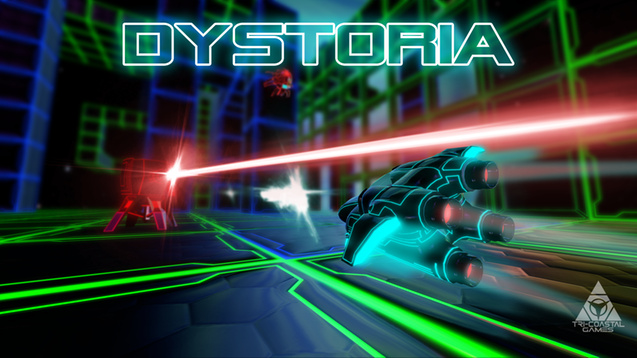 I am never, ever, going to look at a retro arcade station the same way again. Especially not in Canada! Walking outside in shorts along a small street in a Canadian town (obviously that one month of summer heat we get) you come across this retro arcade system titled DYSTORIA. Thinking to take it for a spin you are instantly abducted and brought to outer space. The machine was a front for alien abductions and you my fellow Canadian for the purpose of this conversation, are the new pilot and it’s time to test your mettle.

DYSTORIA has a retro feel while taking the idea of an arcade shooter into another direction. Your ship, at nearly all times, will float above any surface that it finds itself on. Flying around cubic shapes is as easy as hitting forward on the throttle and leaving the rest of the work to your onboard systems. Your ship will simply follow the surface underneath. Just make sure you don’t have motion sickness or vertigo because some of the environments allow for some crazy flying.

Sense of direction is important but more than simply a left right up down sense. What was once down could then become up while moving around an object and when you meant to go right you could be going left. Sound confusing? Because it can be. Even if the beginning stages take it easy on you it’s not long until you wonder where the hell you’re going. Thankfully your abductors provided you a map! Unfortunately it’s a zoomed out map and it always defaults back to the direction you were looking sometimes making you just as lost as before you decided to take a look and plan out your route. 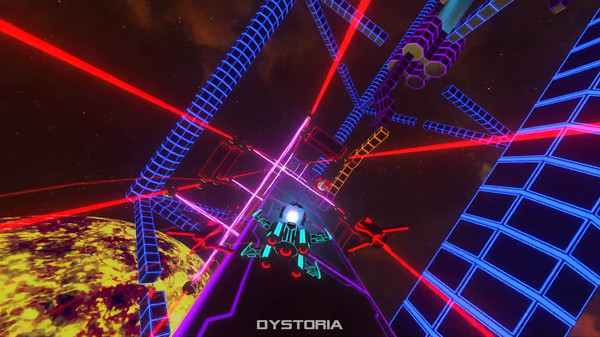 Having a good sense of direction in real life I could get frustrated at this but that just meant that I had to work harder at getting it right. It takes some time and that time should be given as the rest that follows is worth the directional confusion. Each stage has an objective such as collecting all the orbs or destroying all the enemies. Completing these objectives requires flying around giant random space objects that can either be entirely one piece or be linked together by moving parts.

Regardless of the configuration, there’ll be several enemies between you and your objective. Enemies come in different flavours and not all of them are bound to the same rule of being stuck hovering upon these objects. Sure you too can manage to free float but then a timer starts counting down for you to reconnect to the “ground” of the stage. This is where things get tricky. Well tricky”er”. Your ship can only shoot straight. Alright that’s fine I’ll just tilt over a bit… nope. Literally straight. This adds an interesting depth to the experience because the stages can definitely be used to your advantage with using corners for cover and using ledges to adjust your aim to enemies in the distance.

Loading DYSTORIA I could only think of one thing and that was if this supported VR then I would need to make a visit over to Nick’s to borrow his Oculus. While not designed for it, it could be with both a third person view as well as a first person looking out through the glass of your cockpit. This can either be quickly viewed and then let go of or fully toggled to remain that way. 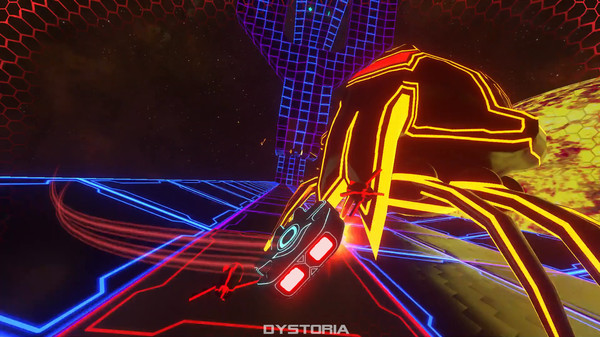 The nice thing about each stage is that you can spend as much or as little time as you want inside of them. Want to simply meet the objective and move on? Go for it. Want to stick around and destroy every enemy and pick up every collectable? That works too. Sticking around is generally the better of the two as it lets you pick up materials in order to unlock other ships to fly around in.

DYSTORIA was a lot of fun and visually made me think of older games back on Windows 95/98. Invoking a good retro feel and having smooth controls with a wild idea of hovering across giant space objects while shooting enemies and dodging their fire was a blast and well worth getting lost and trying to find my way around.