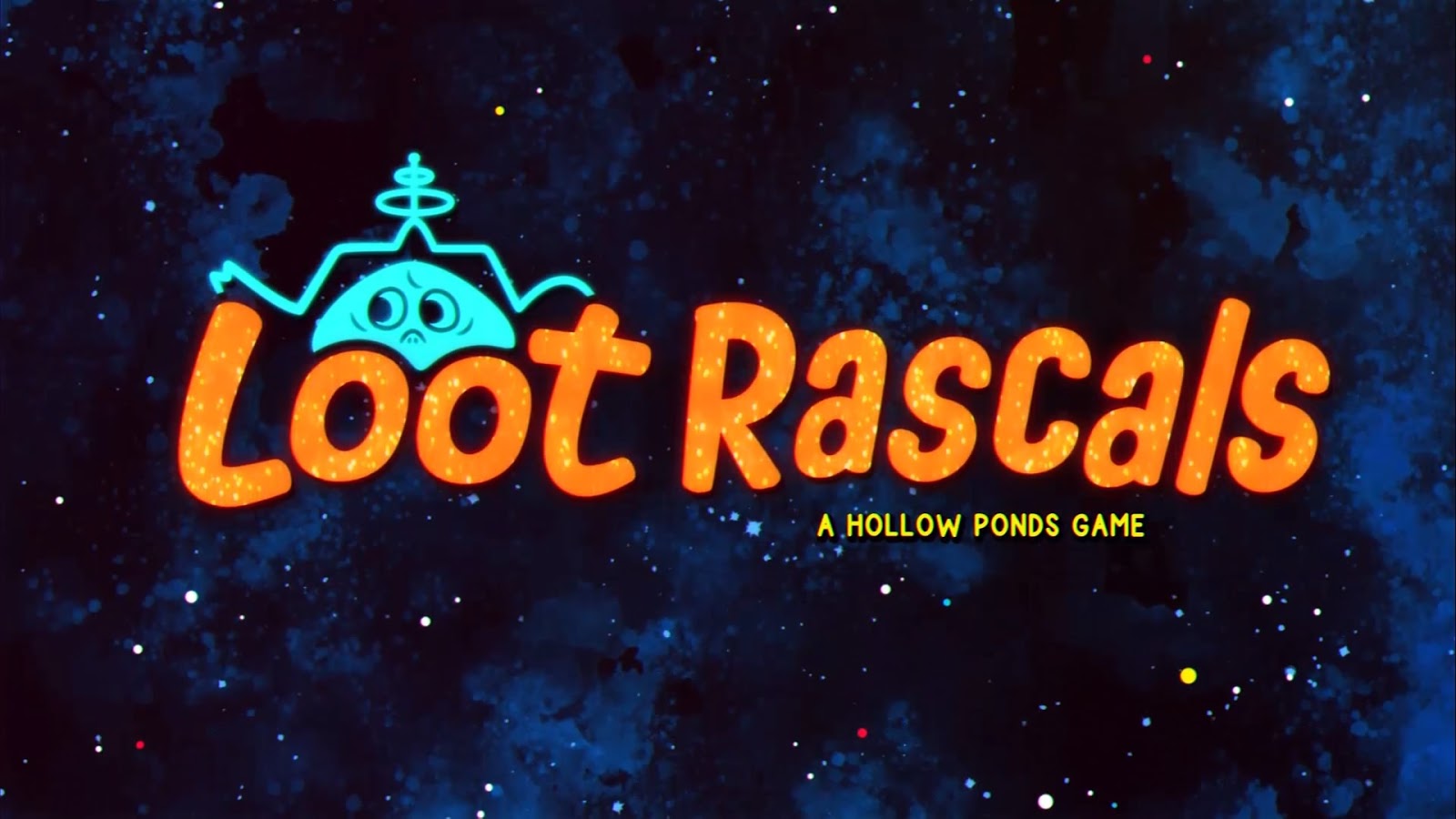 When taking just a look at Loot Rascals, it may come across as familiar to some and simply intriguing to others. Some will recognize the art style from Adventure Time while others, like me, will appreciate the combination of colors as they explore the randomness of the hexagonal moon that they find themselves on. Why is your character on some random moon? Because it apparently got in the way of a new resort / camp that a robot was sent to go set up. This results in your goal to get the “Liquid Anything” that it was transporting back to finish construction.

Well that’s what you were originally supposed to do before everything else showed up with the intent to kill you. The new plan? To hell with the Liquid Anything, just try to make it out alive! Which let’s be honest for a moment that you most likely won’t make it out alive anytime soon. Or at least not within the first few tries. Actually most likely not even within the first few dozen tries. Loot Rascals is a Roguelike that took the idea of survival in a different direction and it is both brutal and fantastic.

Leaving the safety of your starting location / hub, you will have to head out of its protective barrier in order to find the teleportation devices to help you get off of this crazy rock. To do so, you will be moving your character from one hexagonal space over to the next through procedurally generated areas which at times love their dead ends. Each step from one hex to the next counts as a turn not unlike moving from one square space to the next in a traditional Roguelike (see Shiren the Wanderer). This is about where the similarities end and the life or death balance comes into play. 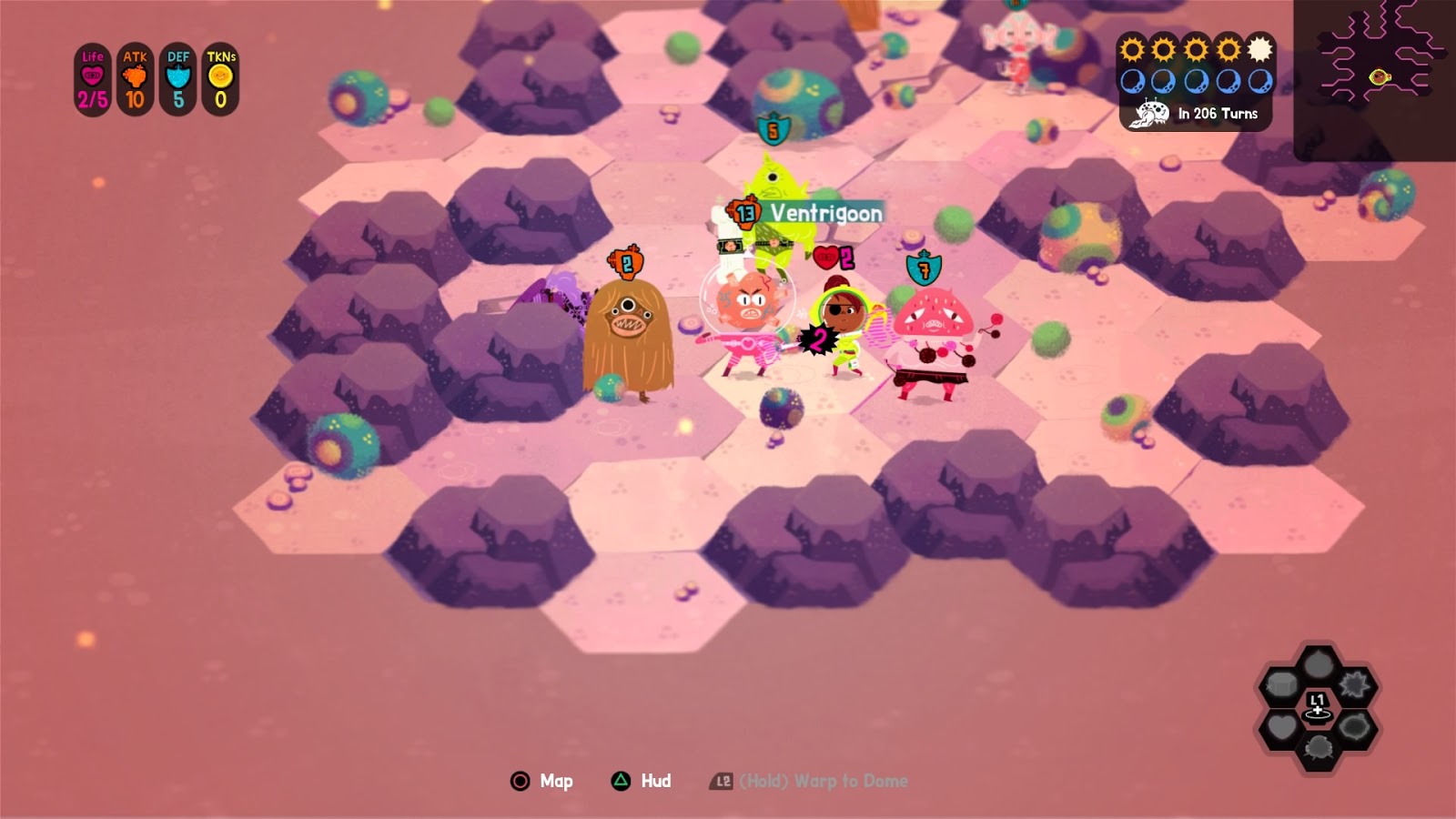 With each movement from one hex to the next, a day and night counter will move through its paces for every hex moved. Each cycle lasts for a total of five turns making a full day and night cycle ten. At first this seemed to be a bit odd, or even too fast, but it wasn’t long before everything else settled in making even five turns feel too long when you’ve essentially, and most likely accidentally, backed yourself into a corner because of an unknown dead end.

Like a traditional Roguelike, for every move that you take so does everyone else that is present. Where Loot Rascals have managed to make something different is that every enemy on the map is labeled either in blue or in orange. Orange enemies means that they will get to attack first regardless of if you’ve moved into them and Blue enemies will be attacked first even if they moved into you. Why the hell would you go and bump into an Orange enemy then? You wouldn’t which is where the day and night cycles come into full force.

Every enemy will swap from being Orange to being Blue when Day becomes Night and vice versa. Some enemies are more relaxed during the day but become very aggressive at night making you want to avoid them until the time is right. This means that if an Orange enemy is standing beside you on turn five, that would be the perfect time to move into into them. Moving into them will cause the turn to go from turn five to turn six switching day to night while also making the Orange enemy that would have smacked you in the face become Blue and be smacked first instead. 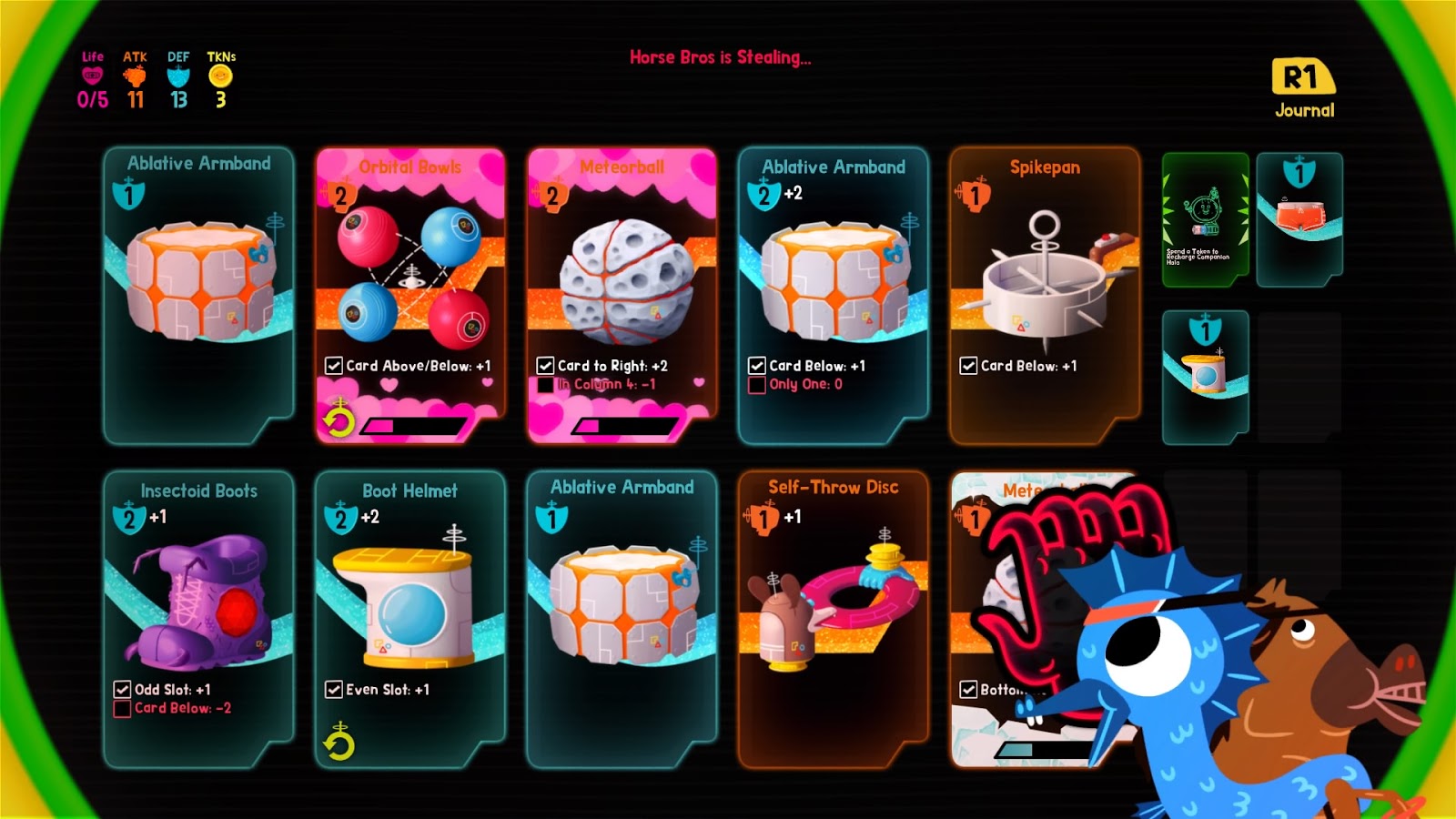 Does this always work out? That’ll depend on the enemies as each type have their specifics for how they are in the day and how they are at night. Will they survive the hit? Will you survive the counter-attack? That’s entirely up to Lady Luck and the cards that she drops for you to equip.

Instead of standard equipment pieces you will get to start off by being able to equip two rows of five cards that also come in Orange (Attack) and Blue (Defense). It was a nice touch to have kept the same colors as your enemy’s actions as it helps keep things simple from a planning perspective. Each basic card that you can equip comes with a score that will either increase your attack or your defense. More powerful cards will come with these values and added clauses such as:

All combat is done automatically which means that unlike the above mentioned Traditional Roguelikes, if you weren’t ready? You’re pretty much dead. Each enemy on the map clearly has its hit points displayed above its head inside of their status bubble (Orange or Blue). Your attack score removes the amount of hit points from their total meaning that if you have more attack than they have hit points then you’re pretty much in the clear with a one hit kill. If they happen to have more? Watch out as their “hit points” are also their “attack power”. 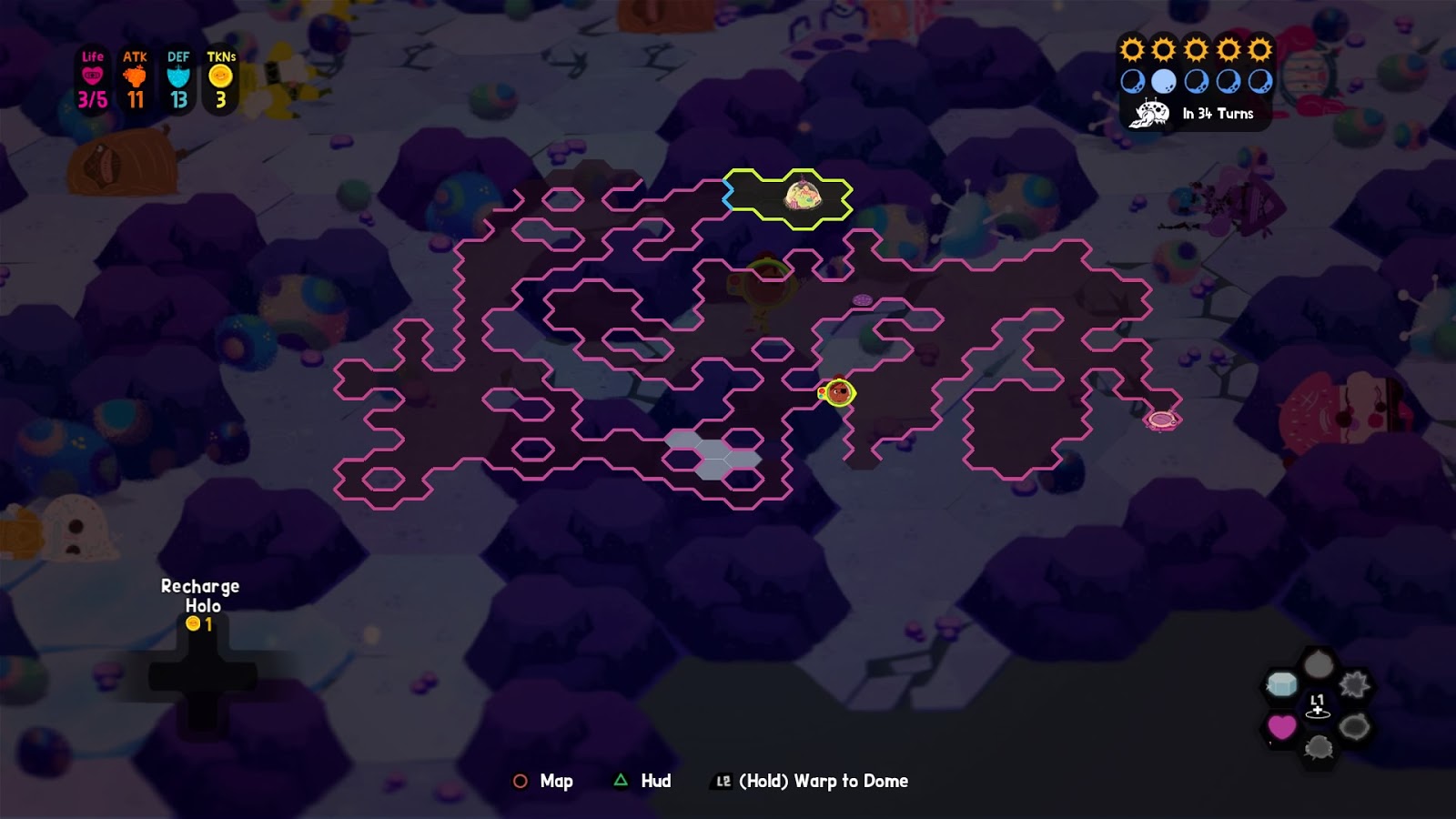 What? “But… but that guy has 30+ Hit Points! What the hell am I going to do!?!” Fear not! Running away is always an option but then again so are burning them, freezing them or even teleporting away. On top of the Attack and Defense cards that you can placed inside of your deck, you’ll also be gaining ability cards that allow the use of Fire and Ice. These cards are mods that need to be installed on top of a card that has already been placed so be careful before you think about getting rid of a card that had a mod placed upon it. While these abilities are in play, you can target enemies up to several hexes away in order to give them hell. Once an ability is used however it requires a recharge time before being able to be used again. Finding pools of Liquid Anything will instantly recharge them but other cards can also help for a quicker charge to be able to use them again.

Now, if your target with 30+ Hit Points does make it over to you at the inopportune time of switching from Blue to Orange not all hope is lost with your starting Hit Point score of 5. Yes a total of 5. Enemies attacks are calculated by your their power divided by your defense. This means that even with a low attack there’s still a possibility of hitting you though the lower their attack the more chances you have to survive. Will it hurt? You betcha. Will you survive? Depends on how many you had left in the first place!

When you die however, that’s pretty much it. You die. You lose what you had on you and to make matters worse? The monsters steal something from your deck as you lose the rest. Not unlike the console version of Diablo 3 with its nemesis system, it is possible to find an enemy that was holding onto “someone else’s” lost card. Once you come across it you are given the choice of either keeping it or sending it back to the original owner. If you do they will find it inside of their mailbox back at the hub. If you don’t? You keep it and put it in your hand. Just be careful because someone may come after you for being a jerk and keeping someone else’s stolen card. 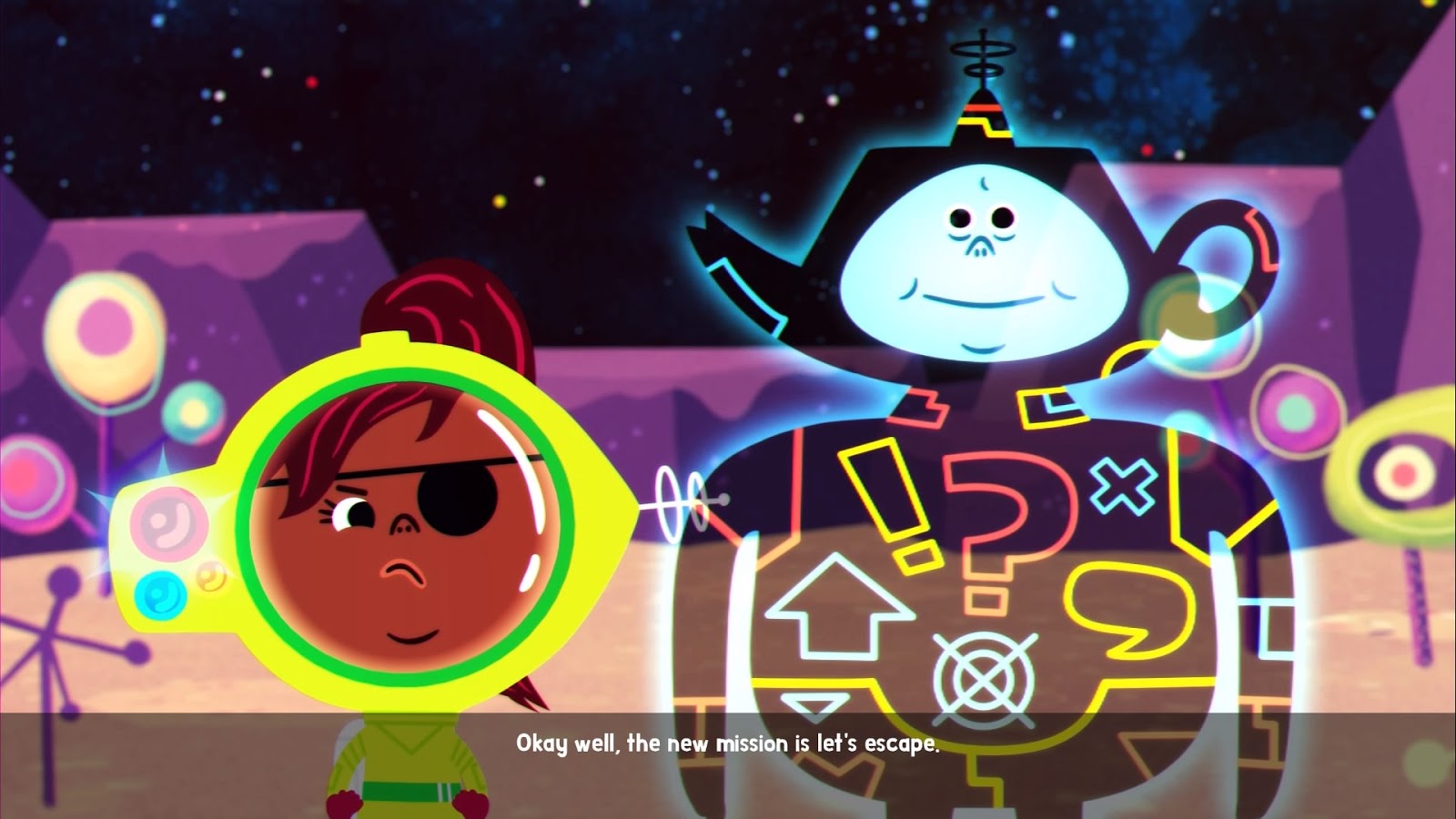 So interestingly enough, Loot Rascals has a few modes. All of them are single player but they add a bit more flavor to the overall. The first and main mode is essentially everything you’ve seen and heard of above. The second allows you to replay any “seeded” world that you may have passed through on your many deaths. Then there’s the last one which is a once a day affair with leaderboards. Everyone starts off with the same Seed and it’s basically a content of how well you’ve made it through that world against everyone else that tried. Just try not to die within the first fifty-eight seconds… it’s embarrassing. Yes it happened. I wound up in a dead end with six enemies that came at me. Not cool randomly generated maps with dead ends… not cool.

Overall Loot Rascals was one of the more entertaining Roguelikes that I’ve played in a while. The visuals are pretty to look at and the mechanics are different than the “norm” making for a new and fresh experience to a style that I know very well and love for some strange reason. Either way, my time spent with Loot Rascals was time very well spent and I can definitely say that I’m not done with it anytime soon. 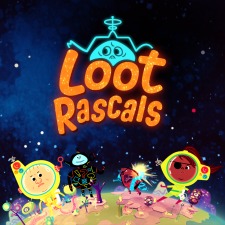