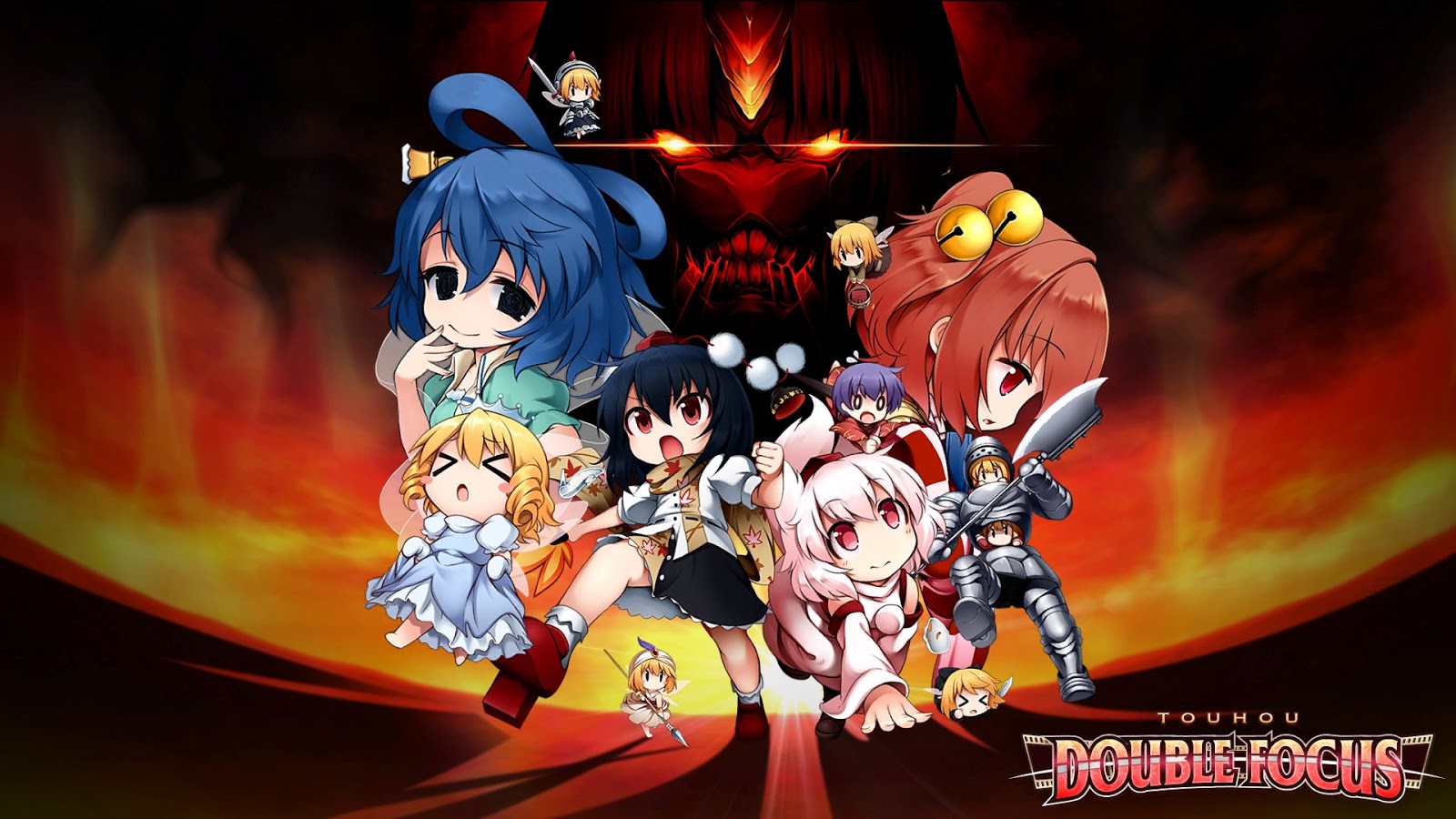 Everyone has that one friend who regardless of what you tell them not to do, well they’ve already done it. This is exactly how Touhou Double Focus beings as Aya opens a book that probably would have been best served staying closed. Thus she succeeds in dragging a number of people into said book. Those now stuck in the book have a plan for getting out, but of course things are never quite that easy. As a result, they are tasked with finding what they need as they embark on crazy trip from medieval castles to smoldering deserts and fairy worlds.

Touhou Double Focus is a platformer in the Metroidvania vein. Attached at the metaphorical hip through their Hit Points, Aya and Momiji will have to scale both high and low through many dangerous environments to find what they need to get both themselves and everyone else out. Each of these environments have their own quirks to make them separate from one another and do very little to hold back their fangs. If you screw up you’re basically dead and brought back to the last time that you saved. Learning this aspect earlier on will save some bouts of crying as nobody likes having to redo segments multiple times over because they didn’t see a lion coming at them or was that Silent Hill’s Pyramid Head in a wedding dress? Oh yeah.

Exploring each area will be done with both Aya and Momiji though only one will be visible with the other constantly ready to swap in at any time. Even with their “reduced abilities, exploration is a breeze with Aya being able dash around and float in the air with her wings as a Tengu while Momiji can run up walls as a Fox. Between the two, the basics for combat are also pretty much covered with Aya specializing in ranged combat while Momiji is specialized in close quarters with her giant sword. 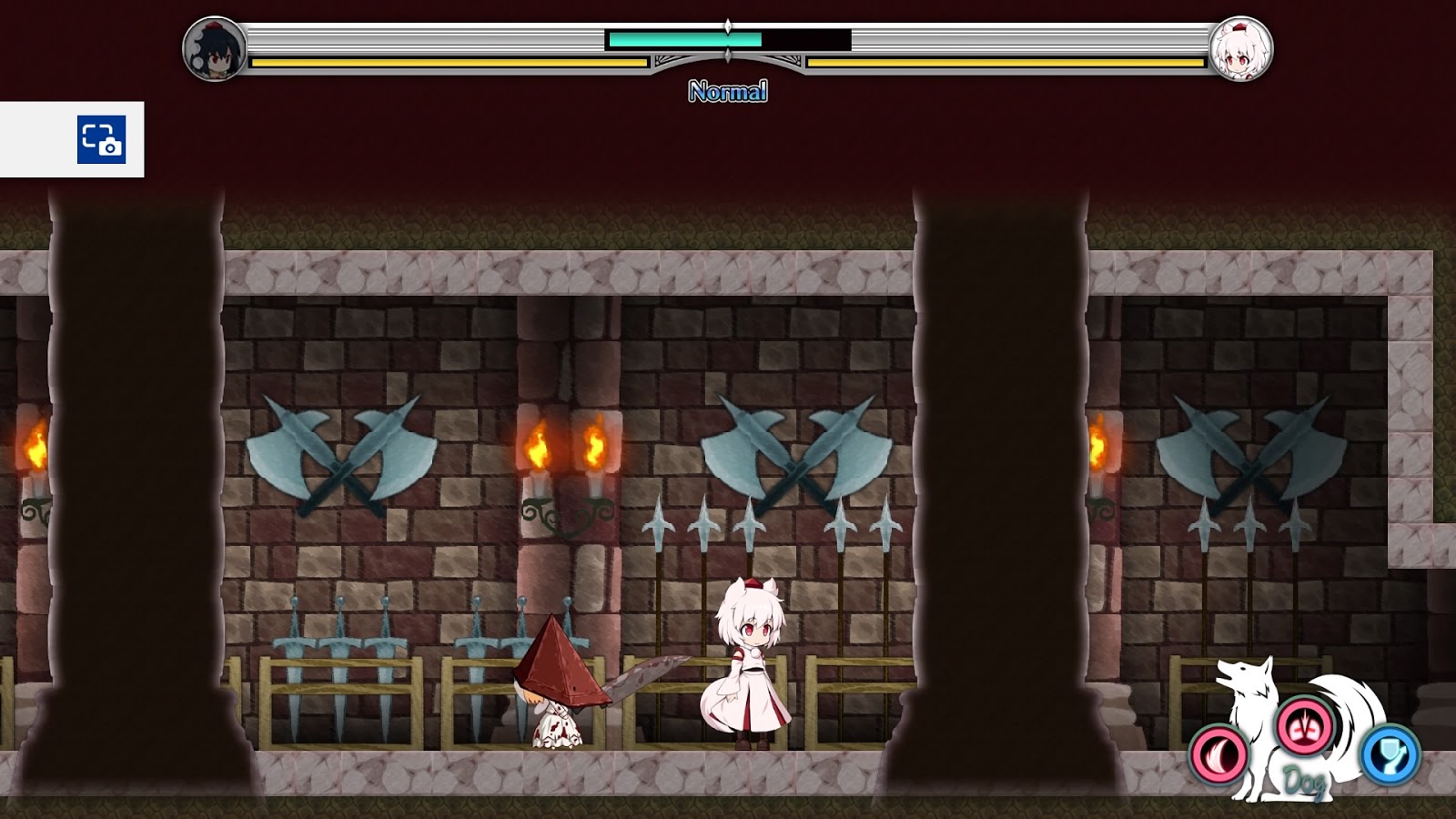 Where things can get a bit “hairy” is while choosing to use the actual analog stick instead of the D-Pad. Double Focus is really best played with the D-Pad as the chances of accidentally doing other things becomes reduced to zero. The reason for this is that the analog stick is very sensitive and even the mildest twitch will transition from walking / running to trying to either fly or crouch if you were in control of Aya. Outside of that particular issue the mechanics are well constructed.

While combat isn’t hard per say, it’s both slow and hectic at the same time. There’s no real running and dashing attacks but instead stopping and swinging. The same can’t be said for some of the boss fights so learning exactly what Aya or Momiji can do early is a must. Switching between the two takes a second which will be something to master as Aya can dodge while Momiji can block a hit. All of these actions take away from each person’s stamina bar though their health is shared – so if it goes out, that’s it, game over.

The concept of the shared health is interesting in it’s own right. Just because one character hits their “zero hit points” it does not mean that they are down and out. Instead they just go into their partner’s portion. Obviously the more hit points currently on hand the better but sometimes healing items are a bit far and the main hub happens to be even further. With potential game overs around every corner, thankfully there are portals that instead of being at predetermined locations, are instead wherever you decide to put them. 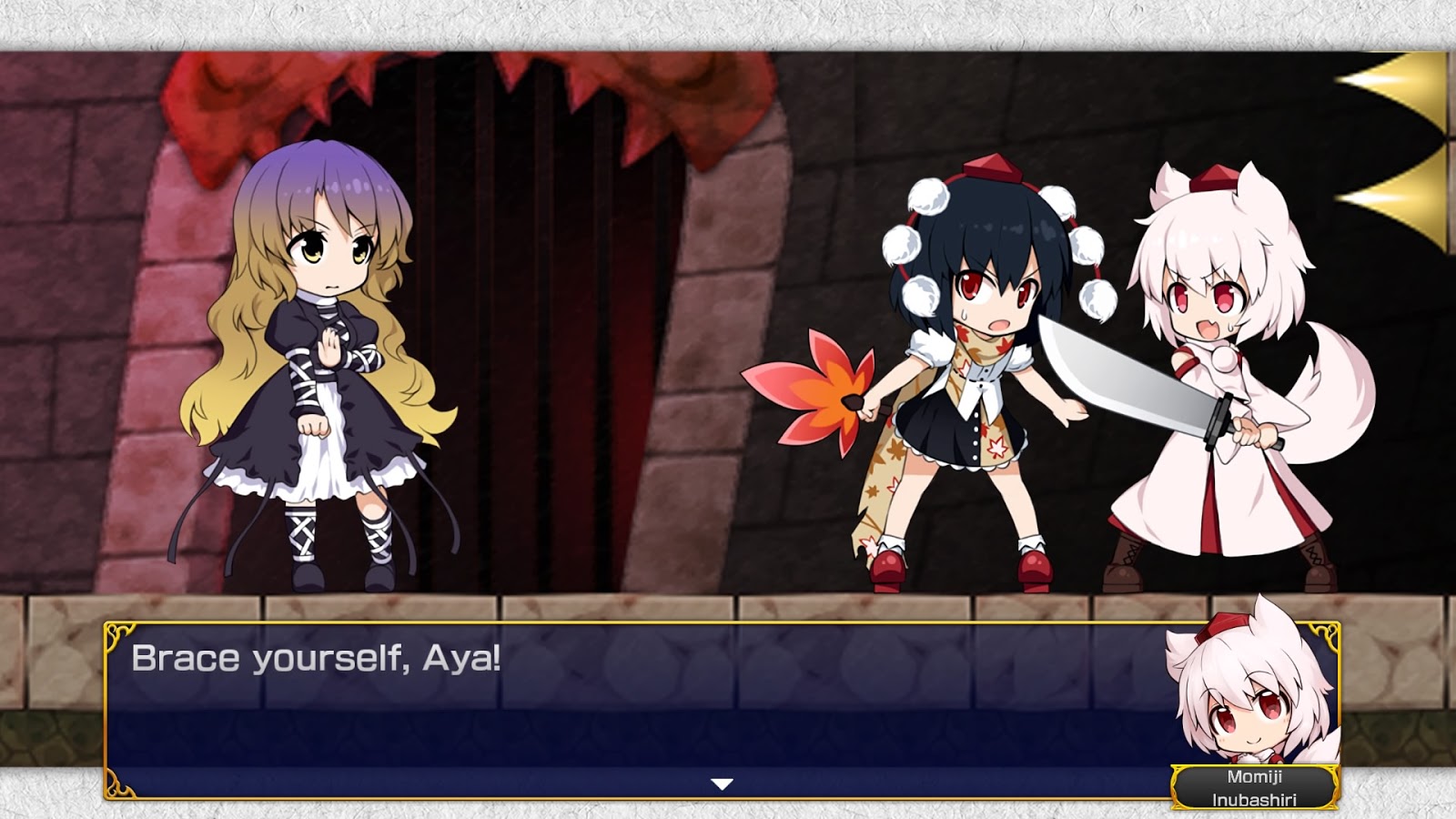 This has to be the most brilliant and the most frustrating feature that could have ever been created and implemented. The absolute choice paralysis! I can put a permanent one time use portal wherever I want? But where is a good place… oh there could be but then it’s a bit far to that other location I need to go to and… and… and… ugh. I’m serious as it took me just about game overing to finally place my first portal down in order to use it to get back to town in order to heal Aya and Momiji which is a bi-product of saving. Very useful two in one feature!

The environments themselves are fun to explore and pretty to look at. Just about all the character models are chibi making even the toughest of enemies cute even if they will kill you without hesitation. I’m looking at you in particular Wedding Dress Pyramid Head. The Metroidvania comes out to play with walls that need some extra force to open through “skills” that you may not have access to yet. Some of these skills can be equipped on either Aya or Momiji while others are character specific like breaking open cracked walls. This only Momiji can pull off and even at that? It’s not really her, but her summoning someone else to break it and holy hell is she a scary boss fight.

Boss fights were fun and terrifying if you rushed it. With massive health bars, rushing in will just about get you killed throwing you all the way to the last time you saved. You know when it’s boss time though so heading back to heal up and save or dropping a portal right outside the door is quite recommended. The bosses themselves once you know how to beat them aren’t as terrifying as you may have once thought but getting cocky is quite likely to net you a quick death. They hit hard and they can hit fast. Dodging with Aya or blocking with Momiji is really the only way to stay alive while waiting for the perfect opportunity to strike. 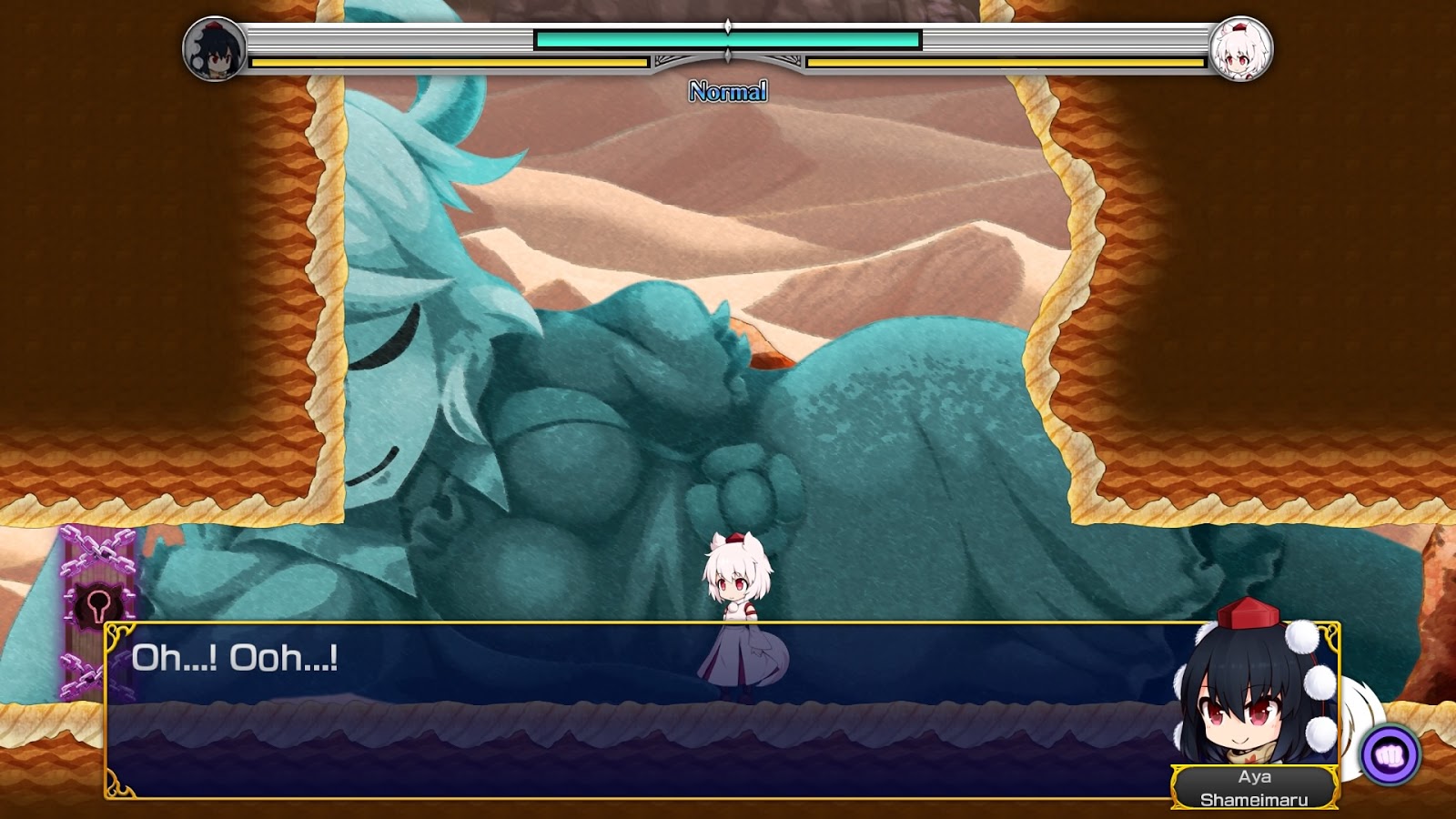 Aqua Style’s Touhou Double Focus doesn’t do anything revolutionary in the style but it’s fun to play and pretty to look at with the chosen color palettes and chibi character designs. Better yet it was great to have a Touhou entry release outside of Japan that was not a Bullet Hell or a Shoot ‘Em Up! I’m looking forward to more and Touhou Genso Wanderer’s review should be here soon! 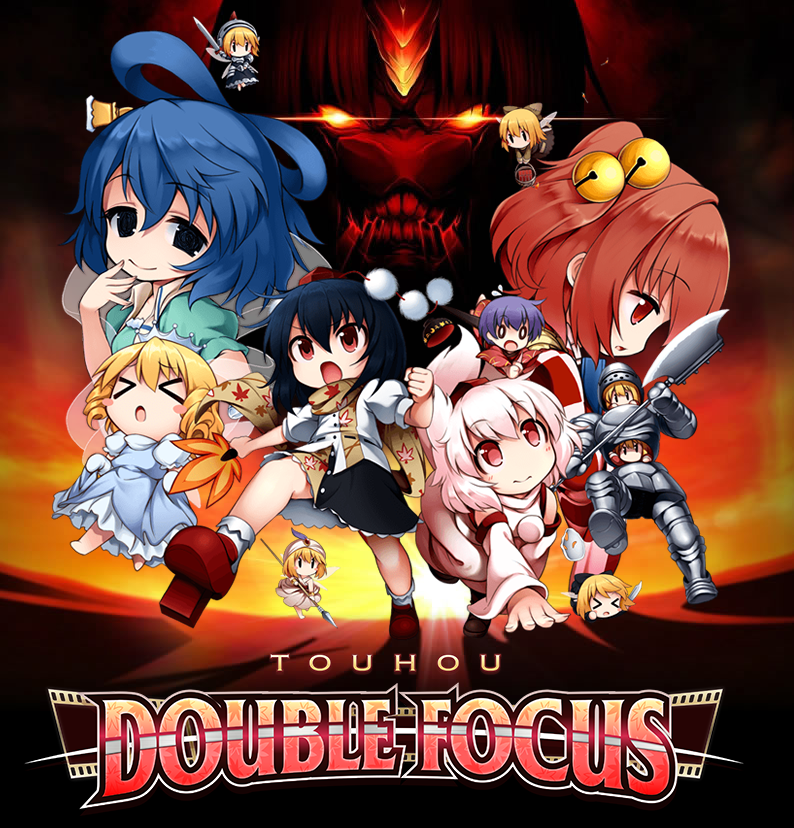