comments Share
You are reading
Oh My Godheads – PC Preview 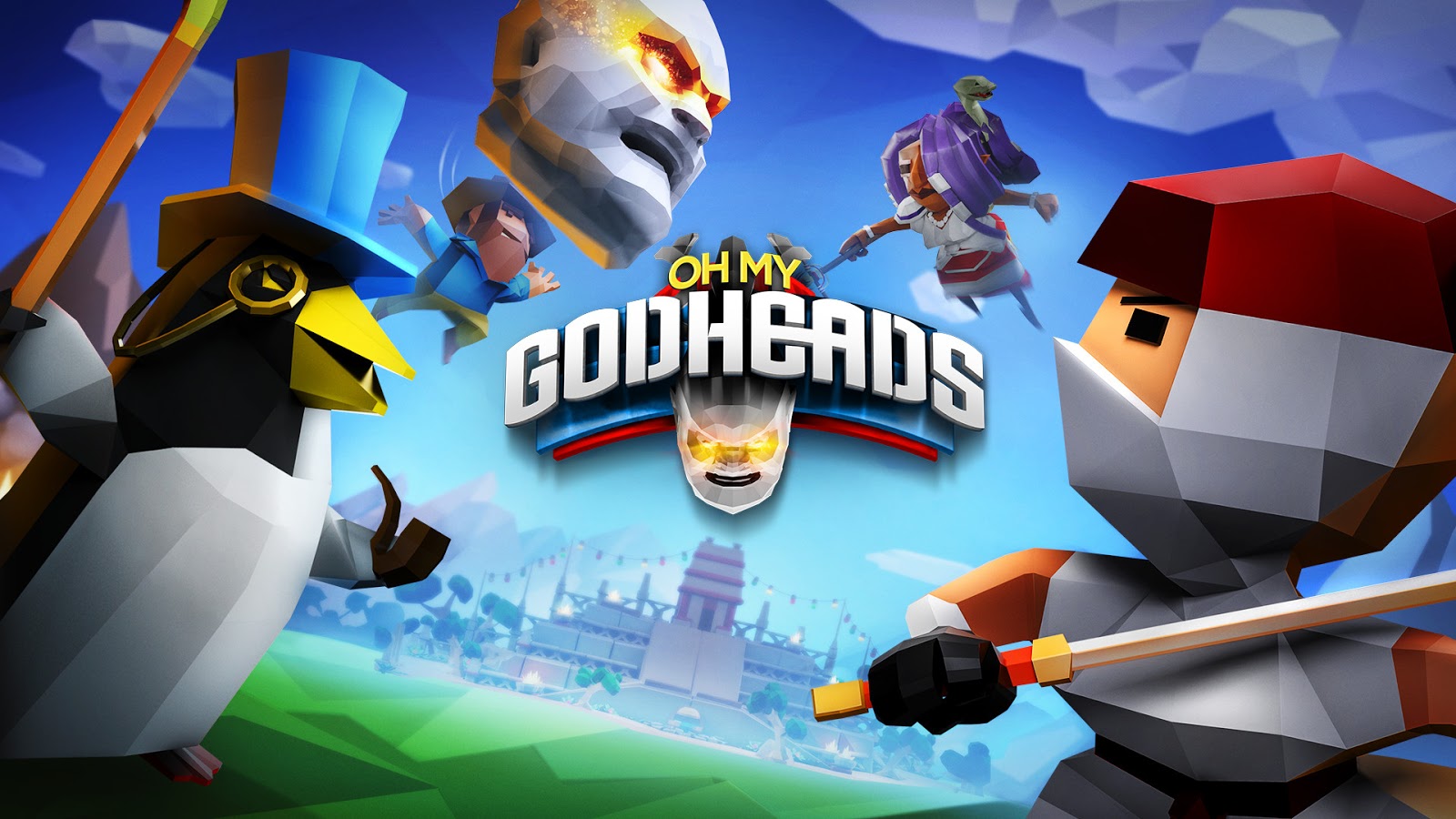 As advertised, Oh My Godheads is “the world’s first capture the head action game for 1-4 players”, and I can’t think of any way to refute that statement. Oh My Godheads has you and up to three other AI or human controlled players battling it out in a sort of “capture the flag” style match, except instead of flags (mostly), you have to cart around giant deity heads, that are still alive and very angry.

There are five modes currently available: capture the head, king of the head, headhunters, last man standing, and trials. Most of these are fairly self-explanatory; capture the head has you grab the head and bring it back to your base, king of the head is “hold the head for X number of seconds”, headhunters is more like pvp combat without the heads, last man standing is headhunters except you only have one chance, and trials are various challenges that range from easy to “godsdamnit, no”.

Controls are basic and the game is easy to get into, which is good because there isn’t really much of an explanation on anything. You literally just have to jump in and try stuff out. For anyone who’s curious, you have a melee attack, a dash attack, “exploding pies” that you can throw, as well as a jump and a dodge. I’d suggest checking out the “controls” menu to figure out what buttons/keys do what. 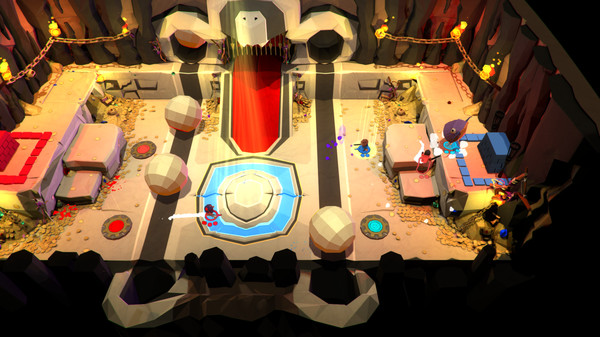 Since most of the modes are similar to what you’d expect I’ll use the featured mode of Capture the Head as the defining play style. Once you’ve found some friends, or decided on AI companions, you can select a location, a Godhead and then set off to attempt to bring the head back to your base. Once you get started watch out as not only your opponents but also the stages and the heads themselves can act against you! Generally the head starts in the middle of the stage and once you pick it up you usually move slower and you can’t attack. You can throw the head if you need to however in which you might need to do when it either explodes or freezes your pants off.

Default game settings at the moment are three points to within one round for victory, although you can set it as high as nine points to win in a five round match. Current stages are incredibly diverse, and include: simple head-to-head, navigating terrain, moving bases, a volcano with sinking platforms, and even a stage where you only have one shared base, but need to hit a switch to flip it between team colors. Which was probably my least favourite, personally.

Current Godheads include: Skadi, Gaia, Zeus, Tezcatlipoca, Bastet, Namazu, Agyo, and an unlockable “flag” that doesn’t have an effect. Each of these heads does something different, and may either help or hinder you. For example, Skadi freezes everything in a surprisingly large radius, including you, and Agyo has a short range explosion, that will not only kill you if you’re carrying his head, but sends the head back to its starting point. Zeus, on the other hand, rains lightning down around you, but not on you. 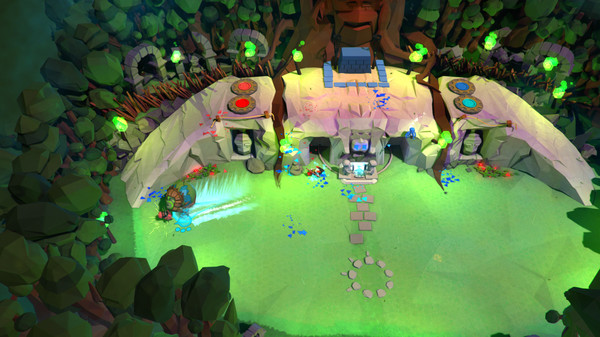 So that’s how Capture the Head works, so let’s talk a bit about the “Trials”. The Trials are basically one-off little challenges such as “kill all the enemies as fast as you can”, or “only kill enemies with pies”. Depending on your performance, you can get a gold, silver, or bronze medal, and as far as I can tell you can unlock stuff, such as the flag I mentioned earlier, depending on how many gold medals you’ve earned. Thankfully, most of the gold medals are either very realistic to earn or incredibly easy, especially if you start abusing the respawns delay before the enemy AI takes action but after they’ve spawned in. Except for, like, two.

A series of challenges has you make use of certain heads’ special traits. The worst are for Gaia and Tezcatlipoca (hereafter referred to as Tezca). The Gaia challenge has you hold the head for 40 seconds for the gold medal, with a 60 second time limit. This wouldn’t be too bad, except it’s 2v2 and your partner is one of the dumbest AI roulettes I have ever seen, and that’s saying something. The enemy AI is fairly decent, and generally both enemies go after you. Which means you either have to be extremely effective managing your time between attacking and holding the head, or have your AI pick up and hold the head.

Here’s the issue: your AI has the dumbest tendency to not only walk TOWARDS the enemies, but will occasionally throw the head for no good reason and then ignore it. If there’s another way to win this, I haven’t found it yet. Extremely frustrating when you get 39 out of 40 seconds and your partner chucks the head, with not enough time for you to pick it up before the trial ends. If you had 70 to 80 seconds, it really wouldn’t be so bad. The other one, Tezca, produces a black smoke which makes it impossible to see in an area surrounding the carrier. Your goal is to kill an enemy while they carry the head. Except the AI loves to chuck the head a split second before you hit them, meaning you don’t get the point for the kill. I may have cried. 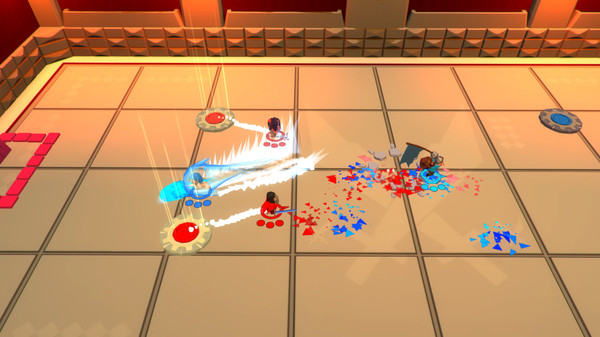 Apart from the trials examples, the AI in actual matches is actually really good. They function at the very least reasonably, and occasionally are really smart about their plays, but never to the point you feel like they’re reading your button inputs. The controller support is really good, and there was no difficulty using the keyboard set-up either. Pro-tip, you can reflect pies if you smack them in the air, which I found out rather unfortunately when I threw one only to eat it myself shortly afterwards, not that there is anything stating you can do so before you either see it happen or try the trials.

I had a lot of funny with Oh My Godheads, I sat down with a buddy, and thought we had played for 20 minutes, turned out to be two hours. A couple of things I would like to see for the final release: a tutorial or practice mode that explains how to play, a few more stages to fight on, and a much wider assortment of heads to choose from. And maybe re-balancing the trials AI a little bit. It would be interesting to have a field with maybe water running through it that would slow you against the flow or speed you up with it, or a whirlpool in the center that will switch between “on” or “off”, and will pull you in. 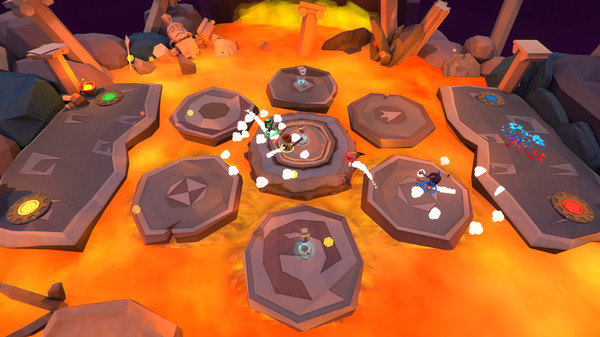 A couple more heads would be good to, because after trying them all out we kind of felt like “welp, that’s that”. Perhaps something like Loki, who would create illusions of players or the head, or perhaps Hel (or a similar God/Goddess) that would summon skeletons or skeletal arms to take back their head. A God/Goddess of light that occasionally releases blinding flashes of light, or perhaps Quetzacoatl, that summons winds to blow the players around.

Even though the game is early access, it really doesn’t feel unfinished, and I’m really looking forward to seeing where this game ends up, and I’m sure I’ll be bringing it out for party games really often.