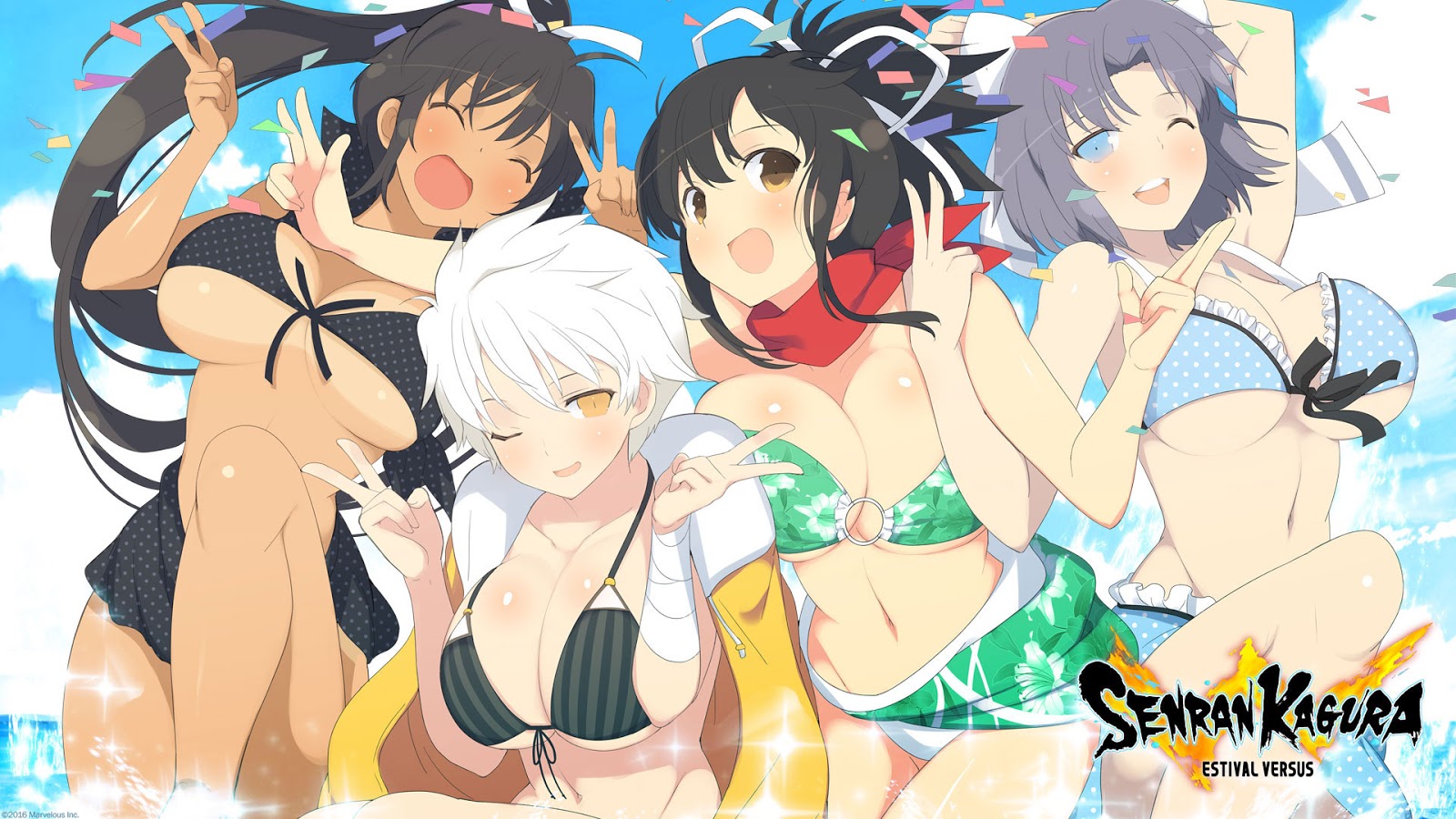 Welcome to the world of Senran Kagura: Estival Versus, a tropical land of ninjas, boobs, butts, bad puns, and repressed emotional trauma! Senran Kagura is, at its roots, a sort of 3D fighting game – although it might be closer to a beat’em up style, akin to a 3D Double Dragon. If you’ve played or seen the reviews for either Senran Kagura: Shinovi Versus, or Valkyrie Drive, you’ll have a pretty good idea of what you are getting into with this release.

Estival Versus has what I can only describe as a semi-schizophrenic plot. There are two main story modes and one “sub” mode. They all function in a similar way, giving you missions that you need to clear before moving on to the next. The main focus is on the “Kagura Millennium Festival”, where the characters battle it out to destroy “festival platforms” in order to have the right to become a “Kagura”, which as far as I can tell is the equivalent of “Master Ninja”, and to challenge the giant “Yōma” (read ‘demon’) that is sealed above the island. Spoiler alert: you never get to fight the Yōma, much to my dismay.

Your second mode is “Shinobi Girl’s Heart”, which are primarily unrelated side-stories focusing on a single character for five missions, instead of switching up characters for almost every mission in the “Festival” storyline. The “sub” mode I mentioned are basically just random bonus missions. I mentioned that the plot is semi-schizophrenic, which is mostly the case in the “Festival” mode. While the looming threat of the Yōma and festival platform destroying is still going on, there will be random intermissions like “let’s force feed these people my grandfathers favourite dish” or “I have writers block for my web novel”, so the “main goal” seems rather underwhelming, despite its severity. Speaking of severity, Estival Versus isn’t all about busty ninjas and the improbable boob jiggle that happens every time they move, there are actually some surprisingly real issues being dealt with, like the death of loved ones and coming to terms with your grief. Which is basically preceded by the perverted equivalent of grade-school track and field day. 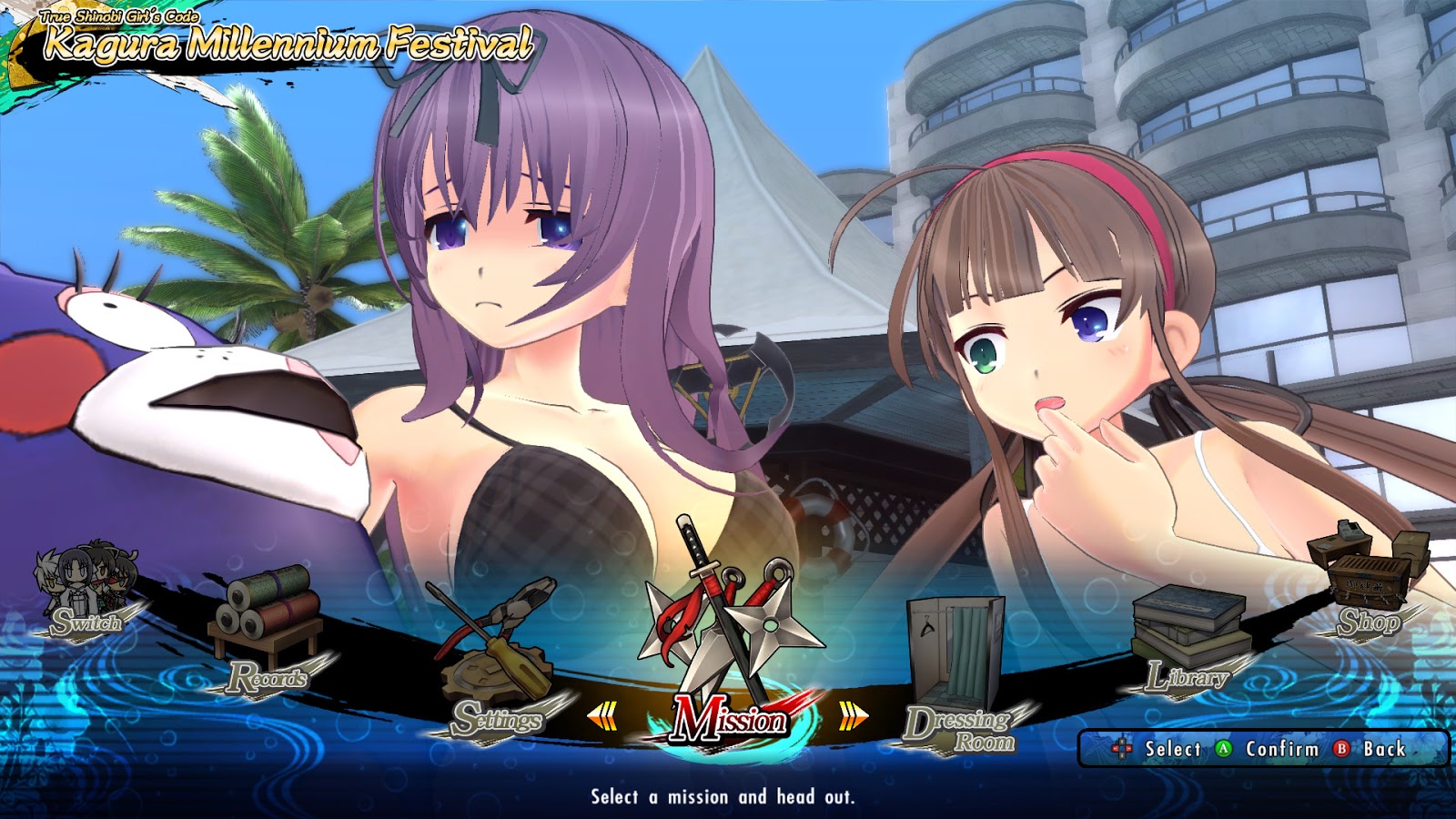 Gameplay has improved a lot since Shinovi Versus. The core idea of “beating down a swathe of enemy grunts” and then fighting another character, or characters, is still there, but the game flow has dramatically improved. All characters have a similar tools at their disposal to dispatch their enemies, although they all have different weapons and movesets. You have a light attack meant for combos, and a heavy attack used for knockback and guard break. There’s a short dash, a guard, as well as transformations and bombs you can pick up and throw. Smacking things will fill up a skill gauge, which you can expend to transform or use special moves.

Each mission consists of whoever happens to be the focus of that mission, and possibly an assist character, clearing out swathes of enemy grunts in order to remove the barriers preventing you from progressing towards the boss. There are also a total of 80 festival platforms spread throughout the stages that you can break in order to unlock more missions in the “Shinobi Girl’s Heart” based on the number destroyed. Unlike in Shinovi Versus, rather than feeling like something sort of arbitrarily thrown in to have you build up your skill gauge, actually feel like a legitimate part of the game now, and area progression feels more fluid. As you hit things you gain experience for the character you’re using as well as proficiency for whichever of the three forms you are using when attacking. Character experience turns into levels that increase health, attack, and defense, where form proficiency turns into helpful bonus perks like increased experience and money, or passive health regen.

While there were some of the 25+ characters I wasn’t a fan of using, they all have their own unique weapons and combos, and for the most part combat was quite reasonable. There are three difficulty levels that are available right off the bat: easy, normal, and hard, so if the enemies aren’t providing much challenge you can always up the difficulty. The game defaults to easy though, so you can’t decrease the difficulty if you’re getting your ass beat. Of course the stripping mechanic is back, although I can’t tell if it’s better or worse. It feels more difficult to shred clothes, but there isn’t a “top, bottom, all” strip finisher depending on the special move used anymore, if the opponent has their clothes torn twice and you beat them with any special that isn’t a “heightened combat form”, the enemy gets completely stripped. 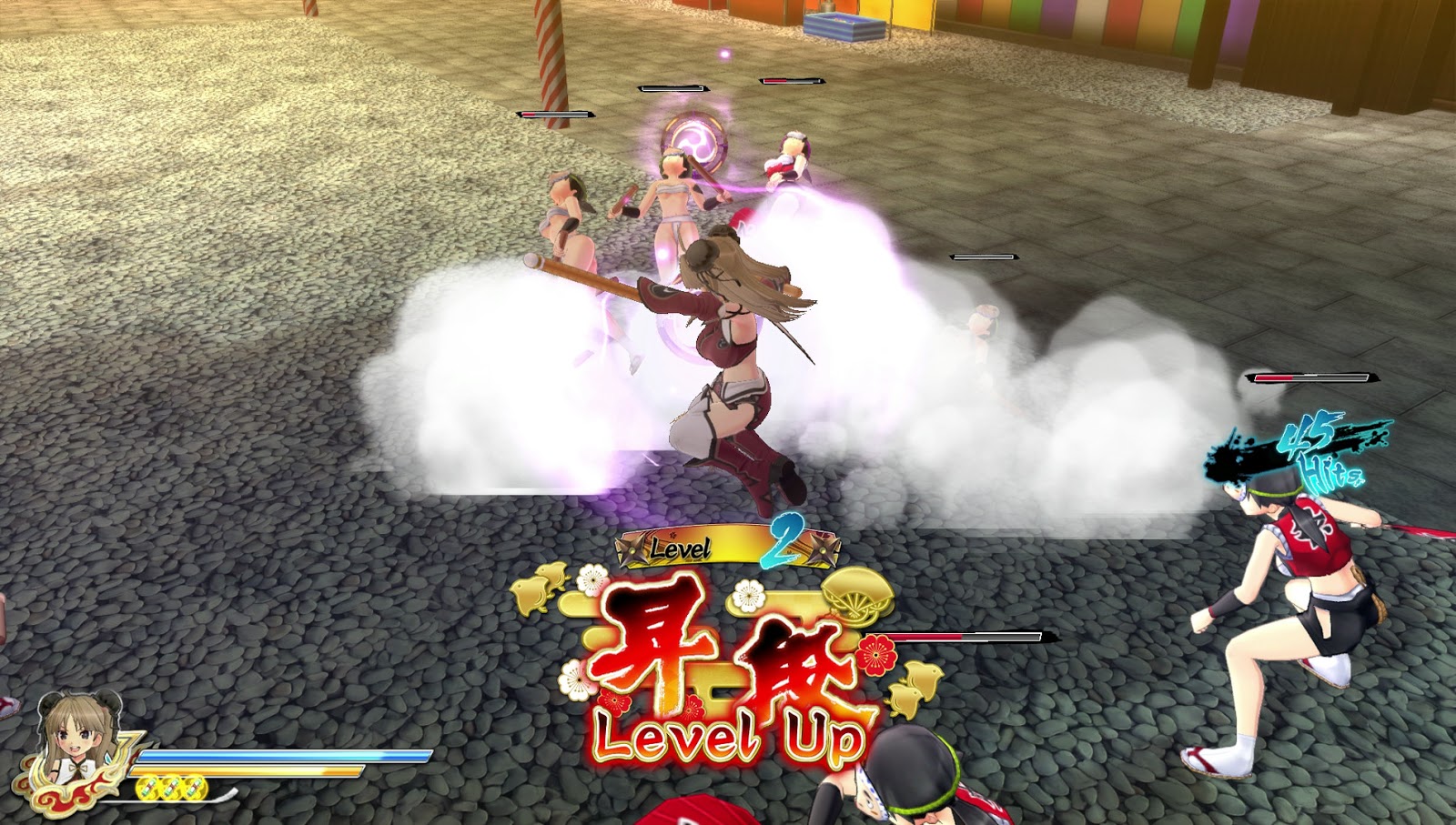 There are also “creative finishers now, so if you beat an opponent that isn’t a grunt near a “[!]” sign, you get a short clip of some sort of embarrassing, and usually sexual, finisher. Like the banana boat, or the chocolate bananas. The game outright tells you how many festival platforms are in each stage, so you don’t need to worry about exploring all the back alleys of every mission hoping to find that one platform that you’re missing. One of the things I was really pleased with is what happens if you manage to get knocked out of the gameplay area. Which happened a lot to me, but I’d probably blame my bad luck on that, since I couldn’t worm my way out of the play area when I was actively trying. If you get too far away from the play area, you get warped back in to the nearest location, which means I avoided about ten soft-locks during a rather annoying fight.

The ability to customize the characters with accessories and outfits bought at the shop is really nice, since the changes are applied in and out of battle, and one of my favourite video game quotes came from Estival Versus, “Your clarity of emotion is like a guiding light to the rest of us. A signpost, if you will. Which you can always use to bludgeon us, should the need arise”. There is also a jukebox mode, which you can buy the tracks for from the in-game store. Which is really good, because the soundtrack for the Senran Kagura series in general has always been really good, so I’m not really ashamed to say I spent a decent portion of time after the 35 hours it took me to complete the game just listening to the music.

There is one thing I feel obligated to comment on, so possible spoiler warning, so skip the rest of this paragraph if you don’t want the spoiler: the last boss was actually really tough. And unexpected. I was expecting to fight the giant demon thing, but instead you get a 2v1 fight. And no, it isn’t you vs. two people, you have a partner to help. And hoo boy, that was almost mandatory. At the start of the fight, the last boss is invincible while they go “rage mode”. I found out the hard way that the “rage mode trigger” does actually hurt you, too. If you haven’t been redoing stages for exp, or if you haven’t done the “shinobi girl’s heart” for the character you have to use for this fight, have fun with that. First attempt I got my ass beat rather handily. Second attempt I won, but it was rather tough. And fun. Really, really fun. I haven’t been that pleased with a final boss fight in a really long time. End spoiler. 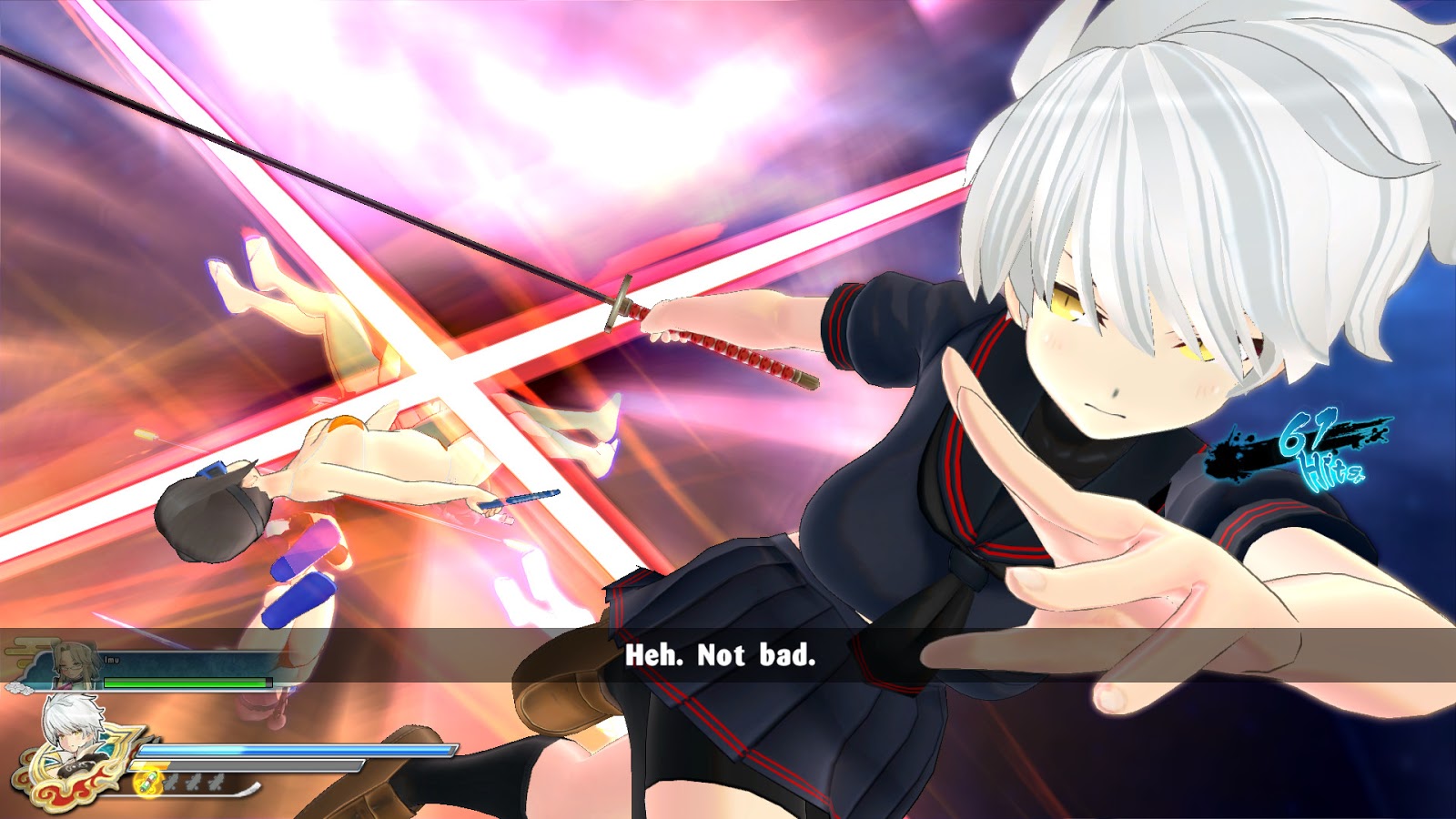 As fun as Estival Versus is, there are a couple of problems that nearly made me flip a table. The biggest of which is status effects. Each character has a status effect associated to their weapon, or what I feel is an increased chance to stun if they don’t have an element. Status effects can stack, but that wasn’t my problem. My problem was how often I got inflicted with a negative status. My biggest gripe came during a fight with Yumi, who can freeze you. When an enemy does their “shinobi transformation”, there is a brief period where the cut-in is fading, but the enemy can attack you. I got frozen on the first hit. And then stunned just before the freeze wore off, then frozen near the end of the stun again. Rinse and repeat, and I got beaten without being able to do literally anything other than sit there with a look of great displeasure. Not sure if just bad luck or infliction rate is too high, but I really wasn’t too happy.

Second problem is the camera. It’s dumb. So very, very dumb, getting stuck behind billboards and trees so you can’t see the beat-down you’re getting. The translators may have taken a few…liberties, let’s say, with some of the lines. The voice-overs are all in Japanese, so it might not be too obvious. At one point, a character says the equivalent of “That’s enough!”, and the translators went with “F*** this shit!”, which may not be totally inaccurate, but when there are a bunch of “Bleeps” and “gun soundeffects” to cover up any swearing or politically inappropriate word choice, the actual swear words in the text just make it seem kind of…pointless, really. The hit boxes for picking up the bombs are also really small. 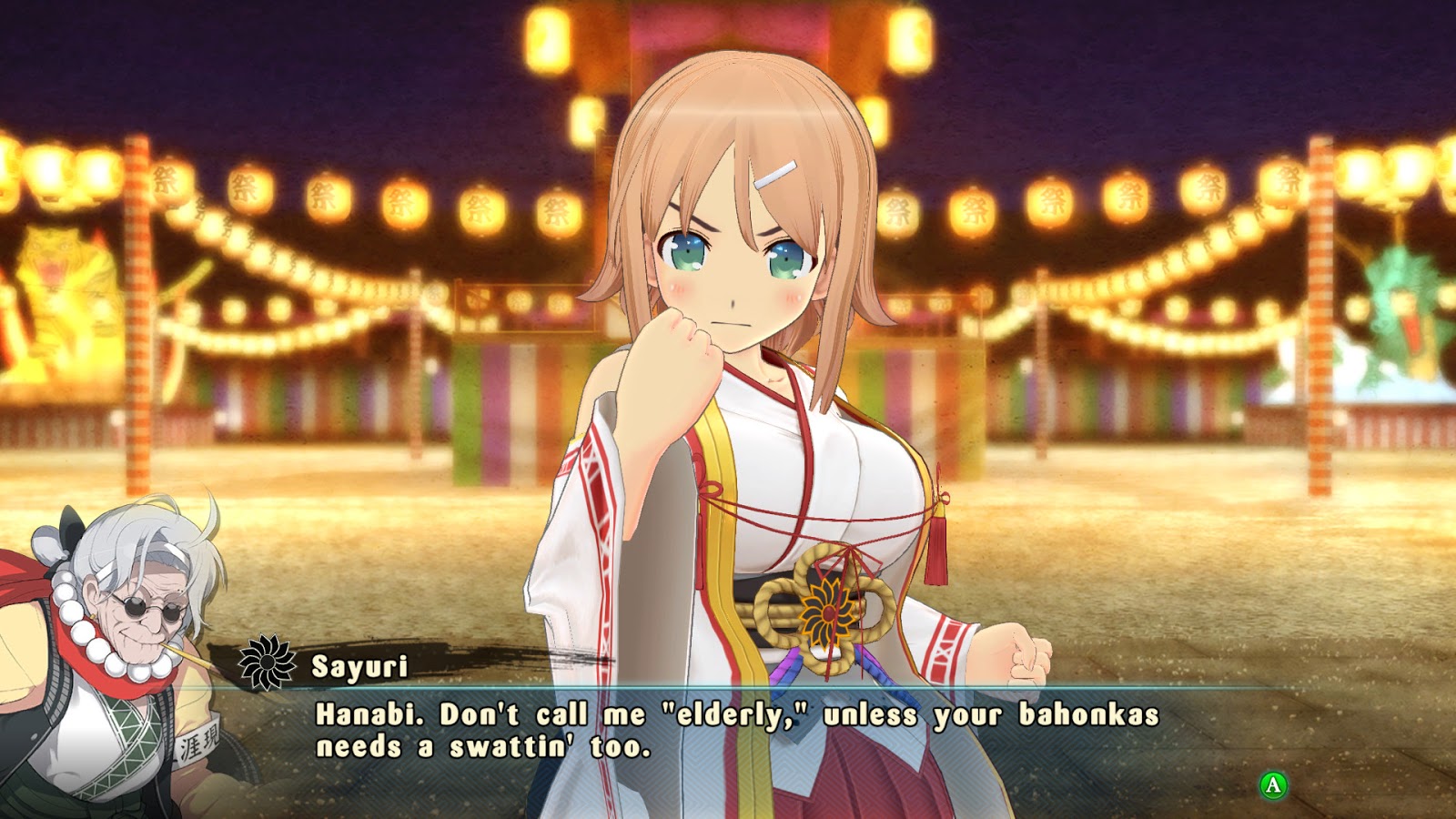 Don’t let the copious amounts of fanservice dissuade you from picking up Estival Versus, the gameplay is solid, the soundtrack is absolutely beautiful, and there is actually a surprisingly engaging storyline. If you’re a fan of 3D brawlers and anime style graphics, you’ll definitely enjoy Estival Versus. Just make sure you know where you’re playing, cuz the fanservice might be difficult to explain.