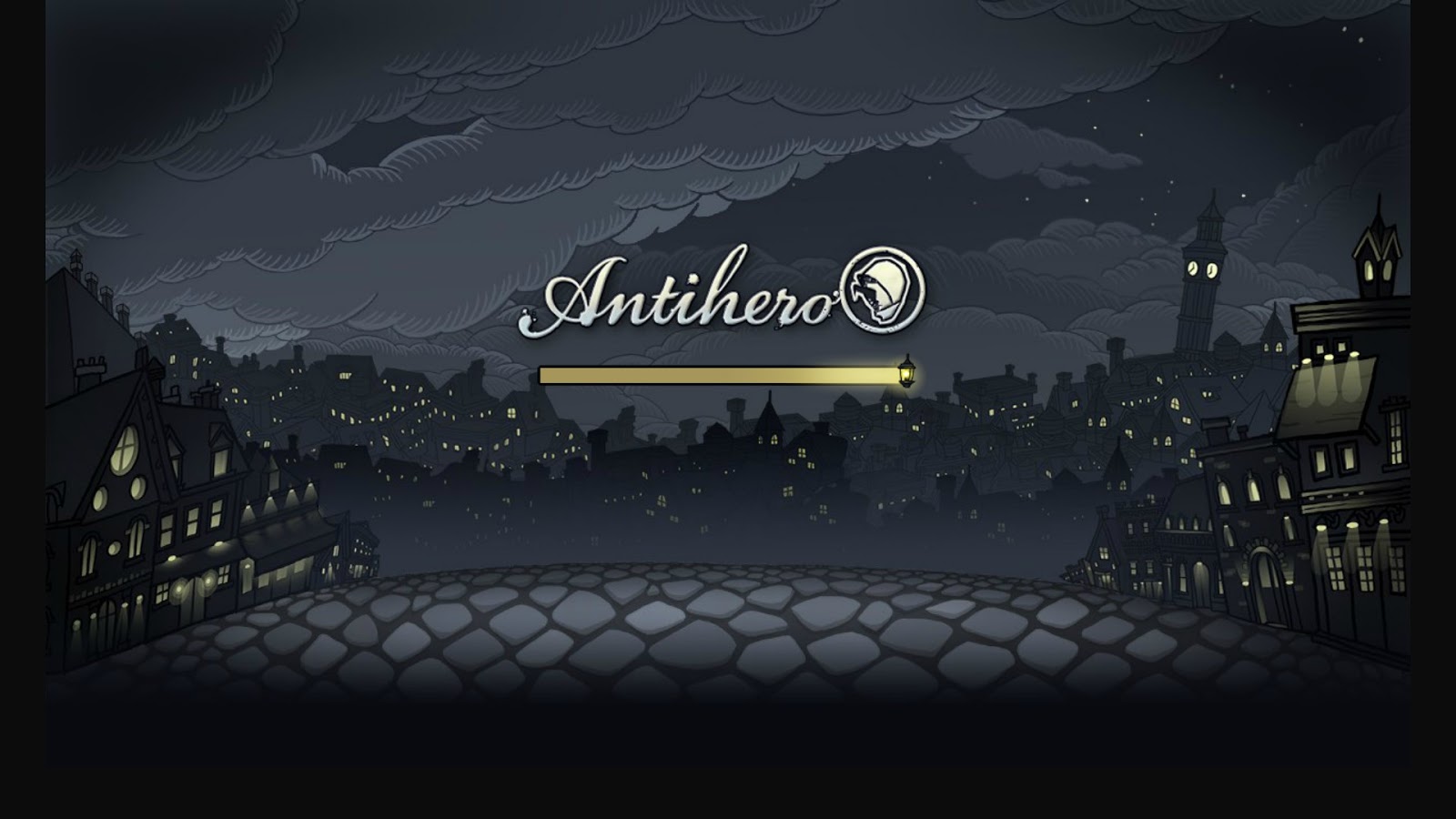 Ever wonder what it would be life to be a thief in a Victorian era? How about a Master Thief while simultaneously being the mastermind behind a gang that runs interference while sneak around undetected? Antihero offers this scenario in a turn-based 1v1 Player vs Player or Player vs CPU game that is currently in Early Access on Steam and slated for a full release later this year.

If what is currently available is any indication of the final product, Antihero is going to be good. The overall system is smooth and already well designed with my only complaint being that it zooms back in every time that it’s your opponent’s turn. That’s it. The artstyle, the interface, the graphics and the animations. It works and it looks good while doing it.

Antihero falls into one of those styles that is easy to learn, hard to master. While the first two currently available tutorials help cement the basics a lot of learning is going to be done through a trial and error basis both against other humans and the “it’s currently kinda dumb” CPU. I really am quoting and in certain cases I’m not sure what they were talking about as the computer opponents taught me a few things and not always in the best of ways. For me at the time anyways. 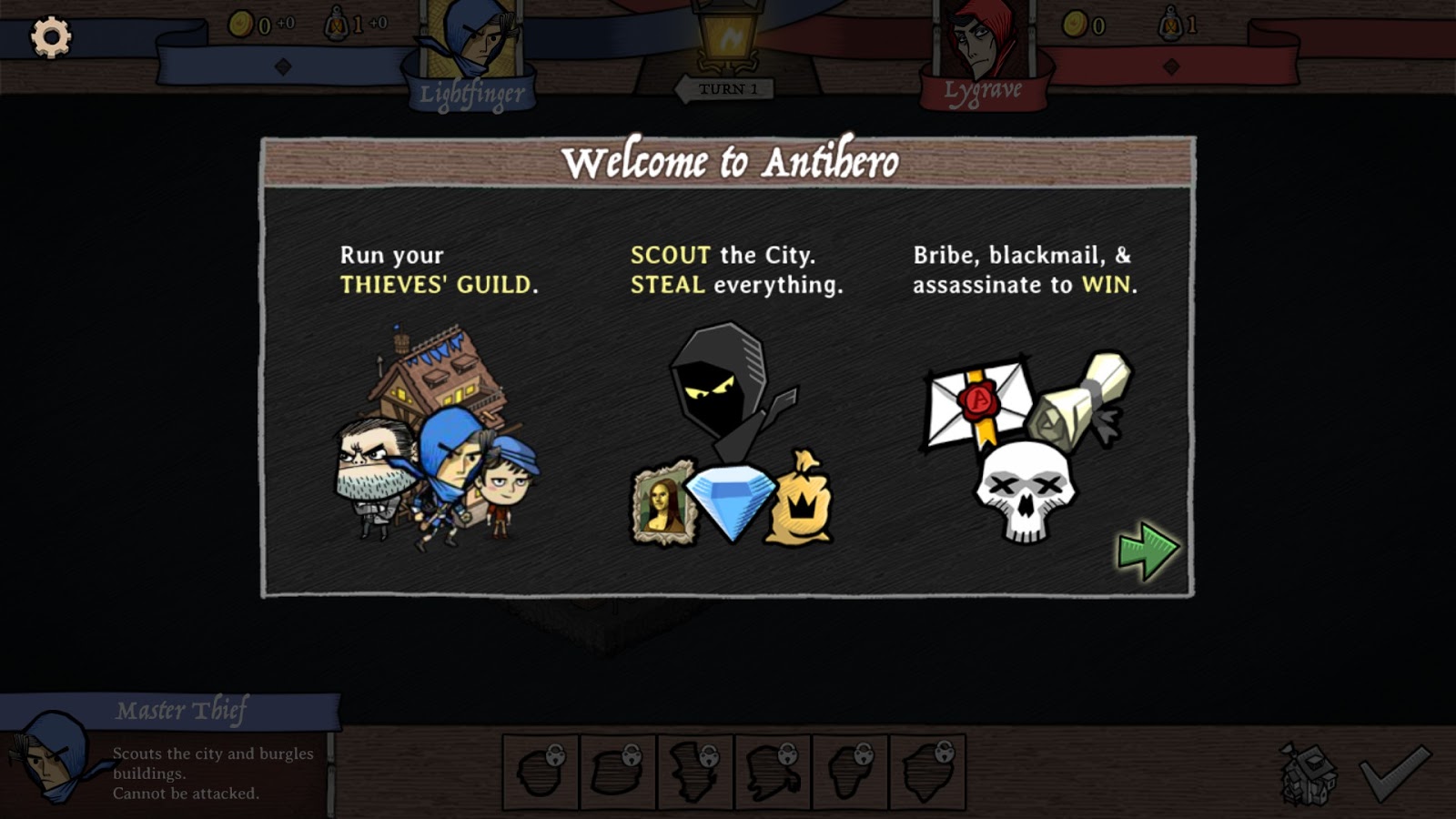 The basics are as follows. You get a turn in order to move your Master Thief (MA) around, they get a turn to move their Master Thief around. Rinse and repeat until someone wins by collecting the required amount of points. Simple concept though the execution (in all senses of the word) is a bit harder than that.

Starting off, your MA will have access to two actions per turn with more than can be unlocked later through an upgrade tree. Starting off every turn at your hideout, you are essentially free to do as you please within the available actions. You can move your MA to uncover more terrain by moving them into the fog of war that will clear it up, you can (if you picked up the upgrade) take out thugs or assassination targets on the map, or you can simply go rob someone while simultaneously checking out the place.

Certain locations only exist as “one-time” extra sources of gold. You can rob the place twice in which you get less the second time but these expire and a “two-time” does not quite have the same connotation. Other locations that can be robbed can also be infiltrated afterwards in order to get more out of it. Churches for example will right off the bat give you a bit of money by sending in a Street Urchin. By sending in two more afterwards, you can get access to blackmail which counts as a victory point. Banks in contrast will simply give you more gold per turn. 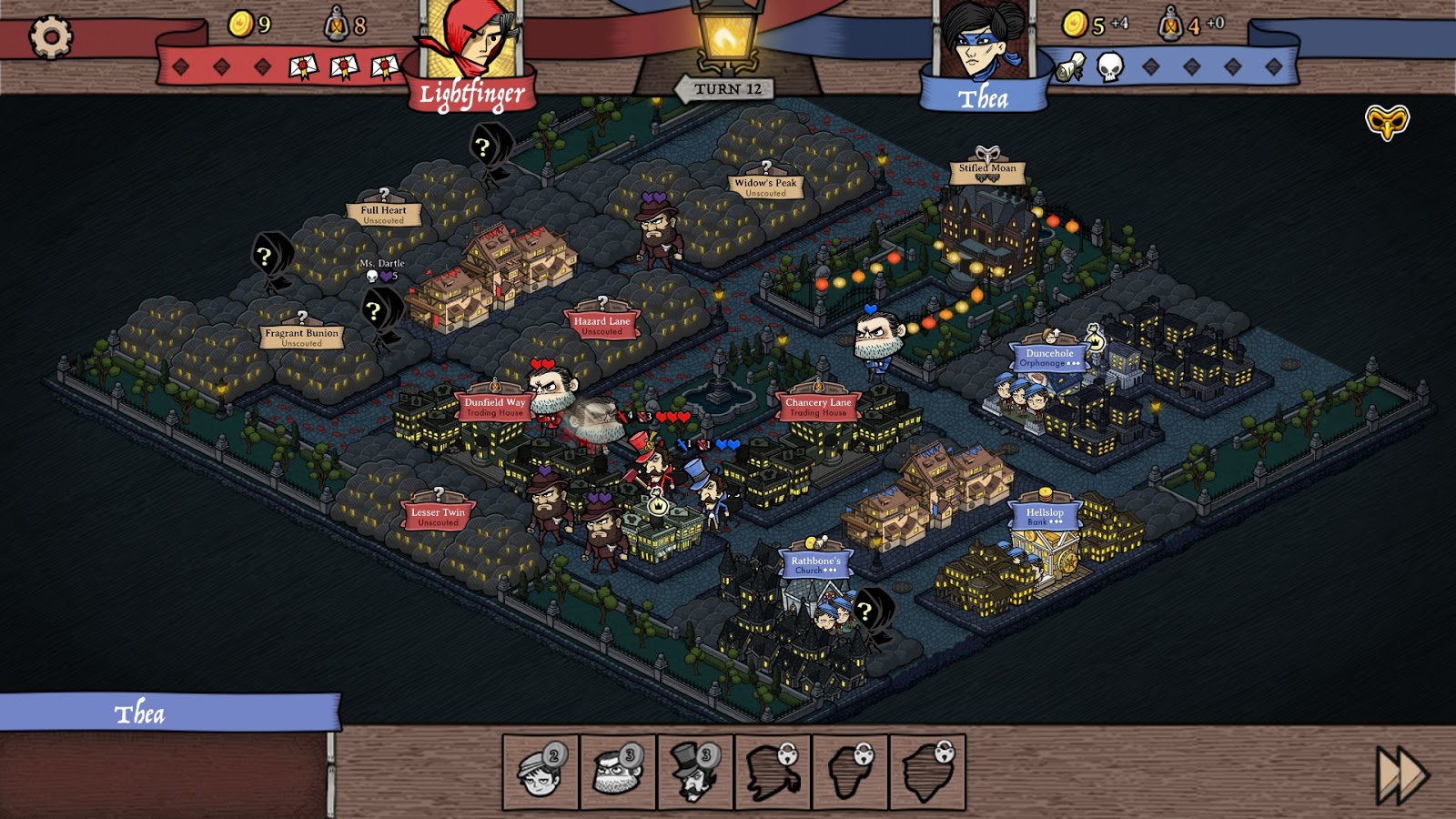 Other locations exist and grant Lanterns instead of gold which can be spent to upgrade your MA’s abilities and to gain access to different units that you can then spend your gold on. What I liked, maybe not enjoyed so much on the spot, is that after buying another unit to put on the field such as an Urchin to infiltrate, a Thug to block the other MA or a Mob in order to attack the other Thugs and clear the other Urchins from buildings, the next one costs more. But only for that turn. This makes spamming units, and also upgrades, much harder and costly compared to maybe waiting an extra turn or two. Regardless of what you choose, these actions can either make or break your thieving career.

Finally, more of a “huh” than anything else, Antihero can be played solely with a mouse or a touchscreen. My small notebook if I flip it around locks off the keyboard and acts as a tablet and it was quite enjoyable to play Antihero this way. It works just as smoothly and let’s you play much more comfortably.

It’ll be interesting to see if a Campaign Mode will be introduced alongside the rest of the tutorial stages but for the moment Antihero is very much a Versus oriented experience. Learning how to use your Master Thief and their assets is a must but it’s also a fun one and we’ll be back with more once it hits its final release!