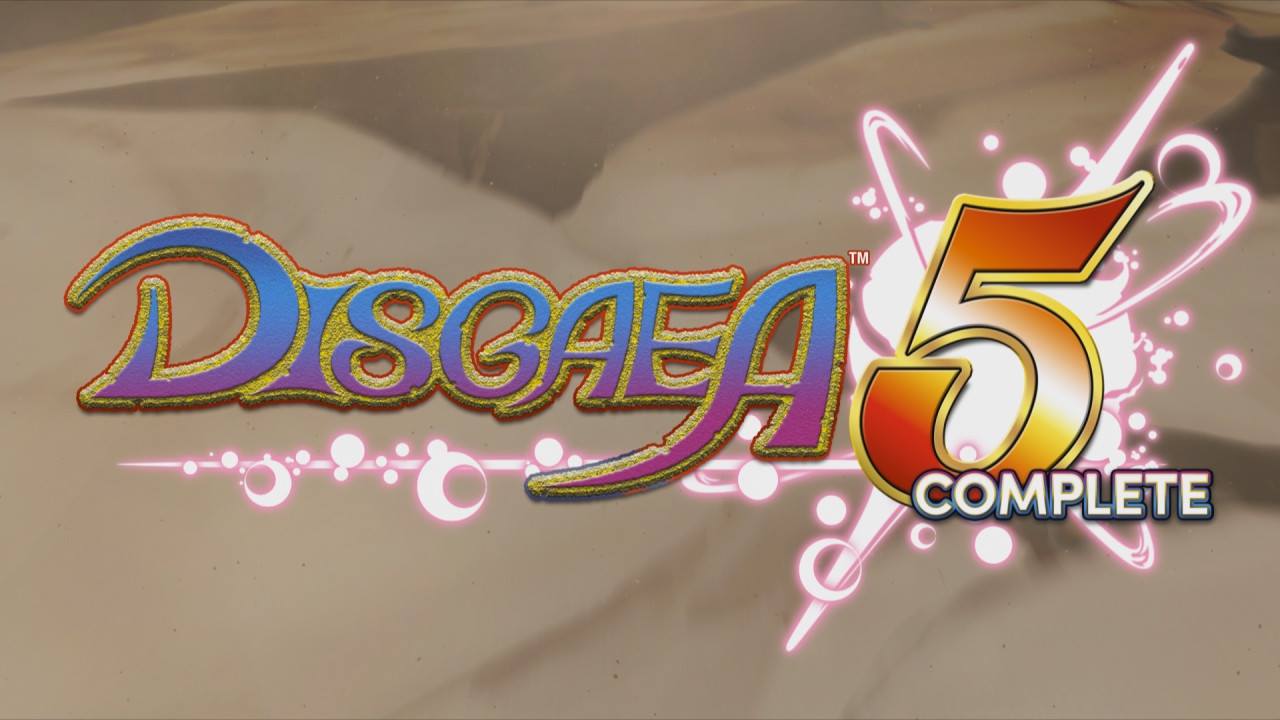 When Nintendo announced the Switch, Disgaea was the last thing that I ever would have figured would be coming its way. They, being Nintendo, are surprising a few of us however with some of the – and hang with me here – mature content. Disgaea can often be seen as immature to some, but that is selling the brilliant dark humor that lies beneath short.  Murder, death and subjugation at the hands of the one known as Void Dark is back and it runs just as brilliantly on Nintendo’s new platform as it did on Sony’s current one.

Disgaea 5 Complete is the entirety of Disgaea 5: Alliance of Vengeance that Nick reviewed back on its release alongside the entire Season’s Pass. This extra content gives access to characters such as Female Laharl, Metalia and NISA from the get go before having to fight against a variety of others to obtain them in your party. These add-ons are available from the moment you gain access to your hub with only a few needing for the tutorial stages to be over. Regardless, you’ll have it all by the end of the first chapter if you want it and if that wasn’t enough, the other available add-ons hold the other fun additions such as a bank account of one million HL (currency) and a few items to get the ball rolling a bit faster.

For those that may be coming into this latest entry for the first time, the story starts off with Killia, a demon of immense power, sitting down in the middle of a battle field in order to eat his bowl of ramen. Sitting squarely between the army of the Lost and another Overlord named Seraphina, the Overlord of Gorgeous, Killia promptly kicks the crap out of the Lost and is stuck with Seraphina in toe. 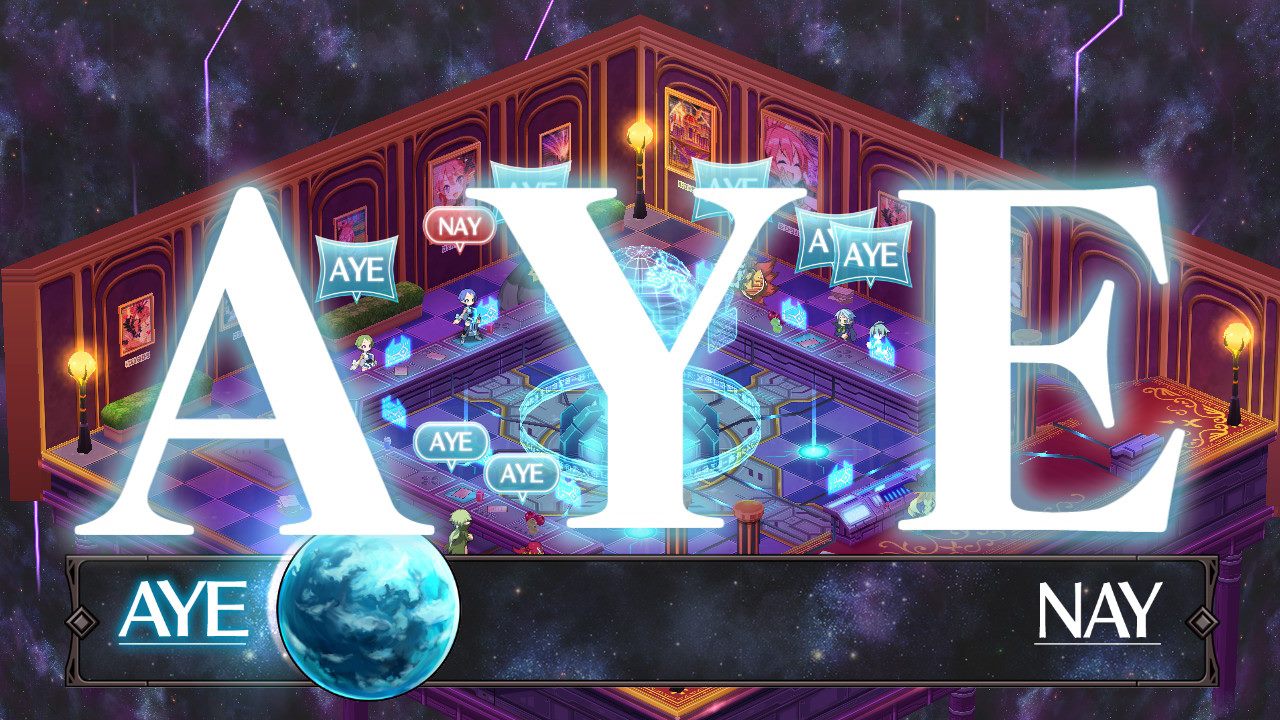 It doesn’t take long before others join up and essentially follow this demon who seems to be more powerful than the Overlords but who is apparently not one himself. He’s after the leader of The Lost, Void Dark, because it seems like Void Dark took away someone very precious to him. Nothing is ever quite so simple however and the journey forward is an interesting one to say the least. I mean there’s an entire chapter on the left of a curry dish. Alright fine, it can also be immature alongside the dark humor. It’s why this series is so damned good. It has the lines and the gameplay.

Before diving into why Disgaea 5 is so awesome, as I had only played the first chapter on the PS4 before lending it off and am still awaiting it back, I want to address its performance upon the Switch. It’s amazing. Full screen on a TV or a Projector with a Pro Controller in hand or portable while watching my brother play Dark Souls or Breanna play Stardew Valley, it’s smooth and it’s pretty to look at. I think it’s a safe bet to assume that most of us thought that D5 would follow D1-2-3-4 and release a PSP/Vita version but having gone to the Switch? It wasn’t a bad move in the least as it gives both the portability and the comforts of home in a single package dood. Sony could have really capitalized on what Nintendo did with the Switch had the PSTV been a dock instead of simply a Vita without a screen and a lack of a fully compatible library.

NIS have been making strategy games for a long time now and while they’ve done spin-offs of the Netherworld such as Makai Kingdom, Phantom Brave and Soul Nomad, the Disgaea series has remained at the forefront of all of these and it has not sat around without constant innovation. Each entry of the series has either added or modified aspects by building upon what could be found in the previous entry and Disgaea 5 is no different. Essentially playing for the first time I’ve noticed that old habits die hard and some of these new innovations may not be as clear to veterans of the series but if we can kick our old habits? It makes everything move smoothly. 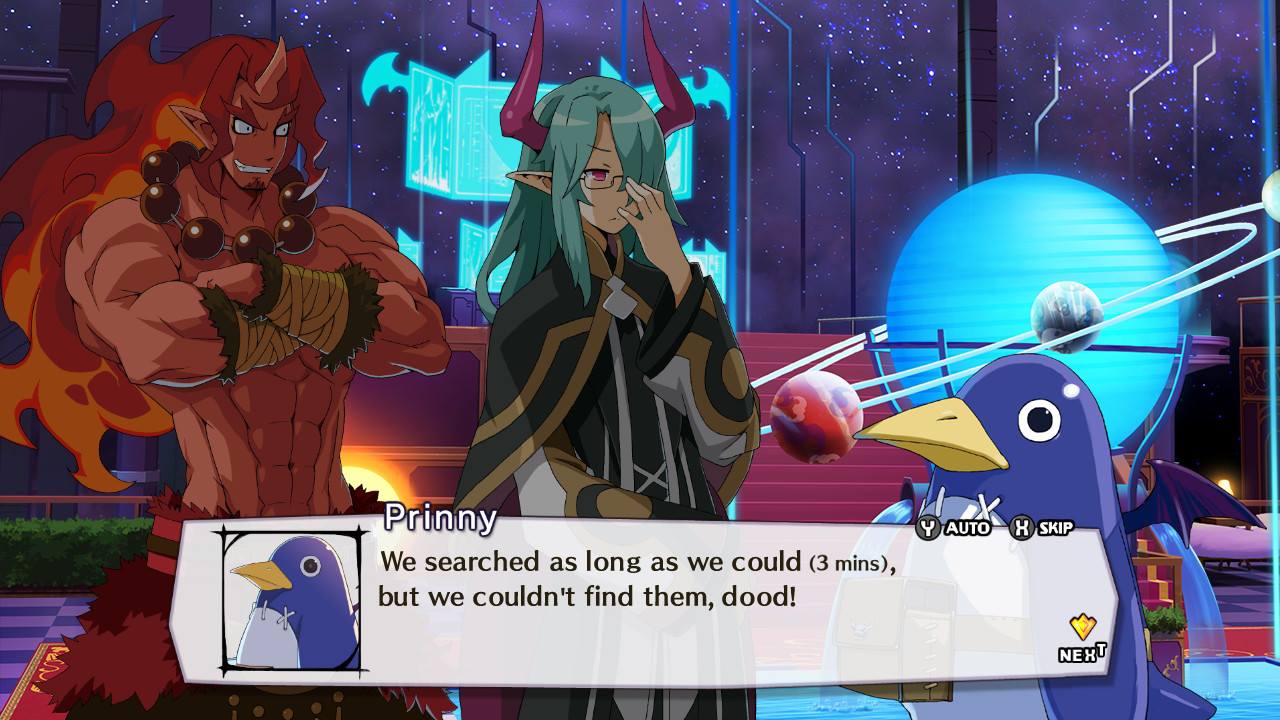 The first of these is the ease of access of everything. Disgaea 5 like its predecessors is a Turned and Grid Based Strategy RPG so there’ll be a lot of moving characters around in order to maximize the effectiveness of your forces. If you moved a character to a spot that you didn’t really mean to, instead of having to cancel their move and re-move them, you can simply move them to another location within their movement range. The same can be said about any of your skills. Some used to allow you to move with the skill selected while others, especially magic, required you to move into place and then select the spell and target. It can now all be done one as easily as the other making setting up your turns so much easier in order to get it right.

Re-arranging skills or turning them on or off can now be done mid-battle instead of only back at the hub which saves so much time if you’re picky like I am and want things in specific orders. Following that up, using those said skills fall into the same boat as you don’t need to change the weapon that your character is holding as you can instead use the skill and the chance is done automatically. All these little things that just make it all smoother to enjoy instead of worrying about menu hell or having useless skills in the way of the ones that you wish were at the top.

Skills themselves are now back to the way that they used to be in which a character will learn them faster or slower depending on their proficiency with the weapon(s) they hold. For a little while if you wanted a new skill or to level it up you needed to buy it with Mana which is obtained by defeating enemies. The higher their level, the more Mana they coughed up. Now? Now you learn them the good old fashioned way but can level them up and increase their effects by going to the Skill Shop. These means that even a character who can’t deal the finishing blows will at least still be learning instead of being left behind. 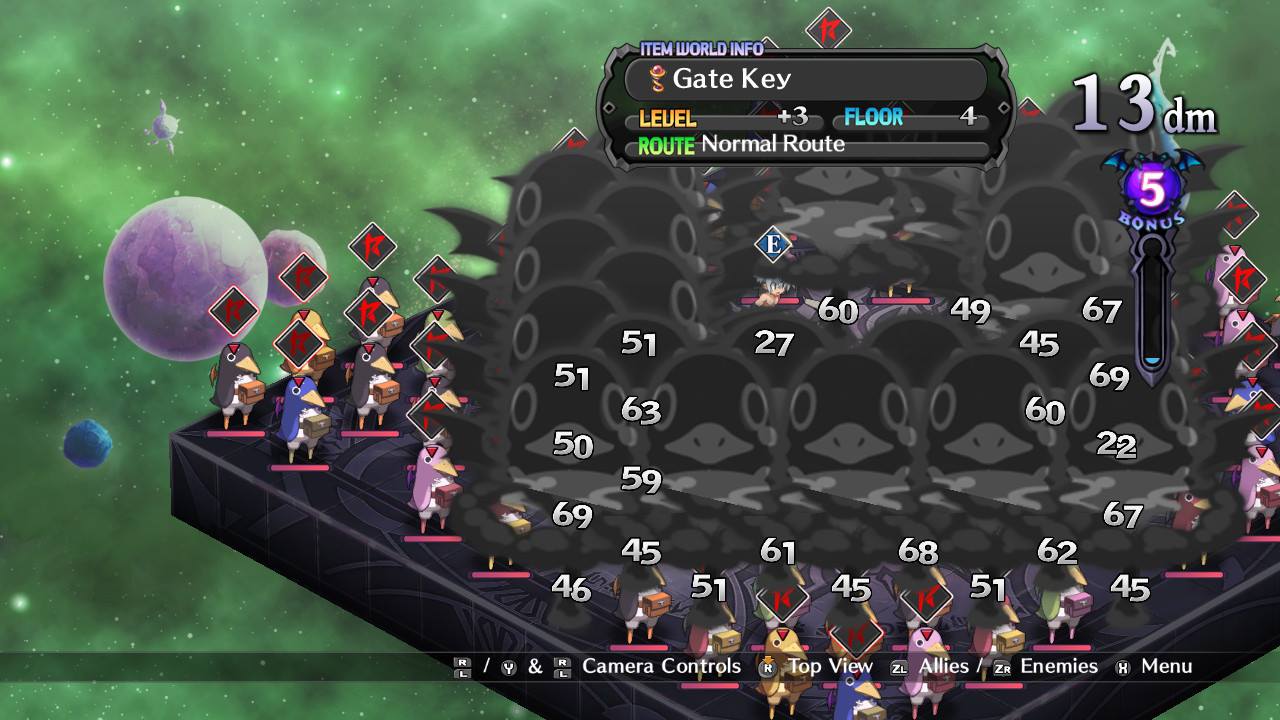 Being the tactic based experience that it is, D5 raised the bar in some of its now more sadistic terrains that it has you fight on. Poison being nothing new has been brought to a whole new level with a resort that exists on a poison Netherworld in which if you want to stay healthy you have to stay out of the water. Easier said than done as most of your enemies are further away. Oh there are beach balls and life savers kicking around but you’ll have to be creative about making it over to them. It’s not that the previous entries weren’t as good with their level designs, but it’s that D5 took it up a notch making you have to worry about your footing just as much as your enemies.

One of the more interesting changes was the Item World. Oh it’s still there and it’s just as crazy as it’s ever been but, just because you’ve cleared a floor doesn’t mean you level up your item anymore. Now instead of simply leveling up by clearing a floor, items are leveled by gaining the level up stat out of the rewards bar or by defeating certain goes on the field. No longer is it really one level at a time but in certain cases four to five in one stage which can make up for talking to an NPC and them removing five because they are in a bad mood. You’ll always get at least one but for the rest it’s a gamble.

The writing and the voice acting is just as on the mark as it’s ever been. There are some characters that you’ll either love to hate or hate to love, or if you’re my brother, super love Magnus and absolutely despise Seraphina. I personally enjoyed both as she made me think of Etna as a Tsundere and Magnus was just hilarious. The interactions between these characters is also a nice touch as not everything is forced through cutscenes. Instead, you’ll receive an on-screen notification within the hub that a skit not unlike the Tales of Series that can be viewed as long as you go talk to someone with an exclamation above their head. These little skits add to the overall but are not necessary in order to move on. 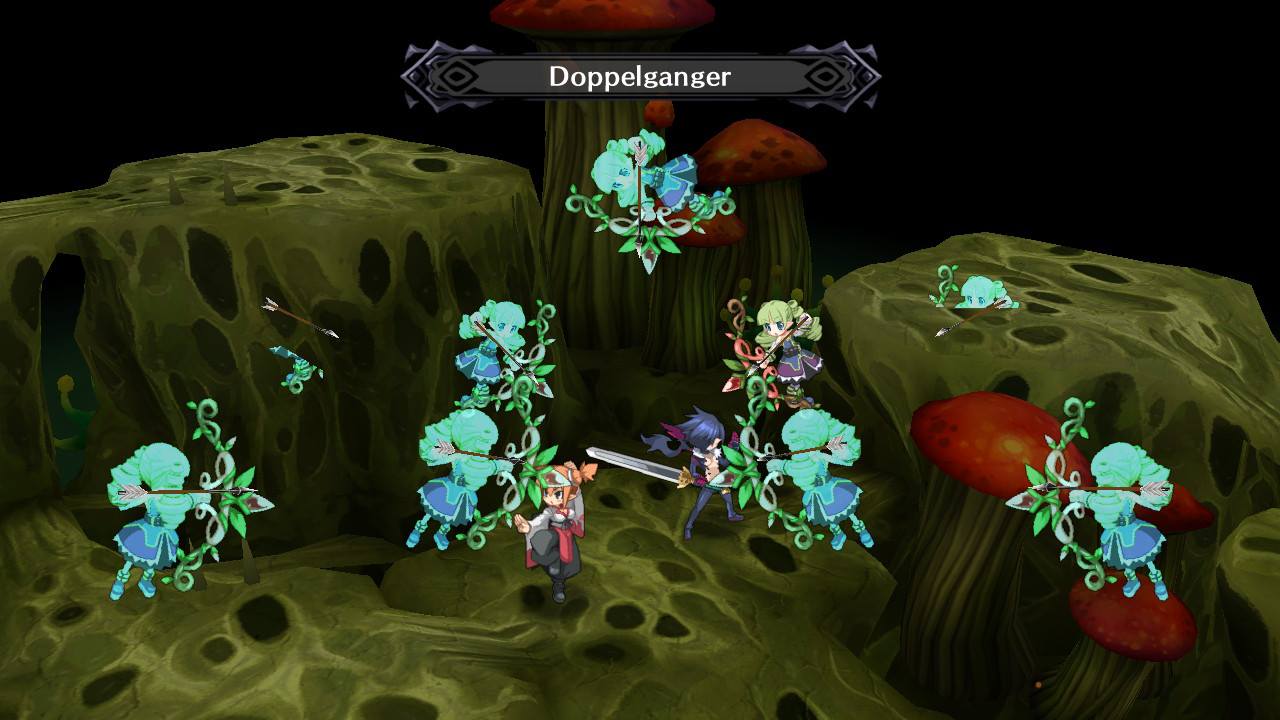 While the idea of NIS having moved over to Nintendo’s Switch instead of Sony’s Vita was a bit worrisome for the smaller device’s future, it was a good move for Nintendo to host it. Disgaea 5 Complete runs brilliantly both in fullscreen console mode as it does portably as it was just as fun to play one way as it was the other. Having all of the DLC content from the get go was simply more sardine flavored icing on the cake dood!