Regular readers of our site know what a tremendous fan I was of Dragon Quest Builders. It was Dragon Quest with the best parts of being able to build through an open concept voxel world. Portal Knights is exactly this in concept, though it shifts points of emphasis. Here we have less story, more combat, and the ability to share in the fun with others.

This is more than just my review of Portal Knights. It’s Breanna and I’s review as short of the several hours I clocked in with another character to try things out, we’ve played together. Most of the time for three to six hours at a time. While it plays well Solo, Portal Knights is definitely better with a friend.

The idea behind it all is simple. The world was fractured and those known as Portal Knights can access each of these fragmented pieces by putting the finishing touches on the portals that can be found lying about. Both finding these portals and getting them up and running is where the real story begins. 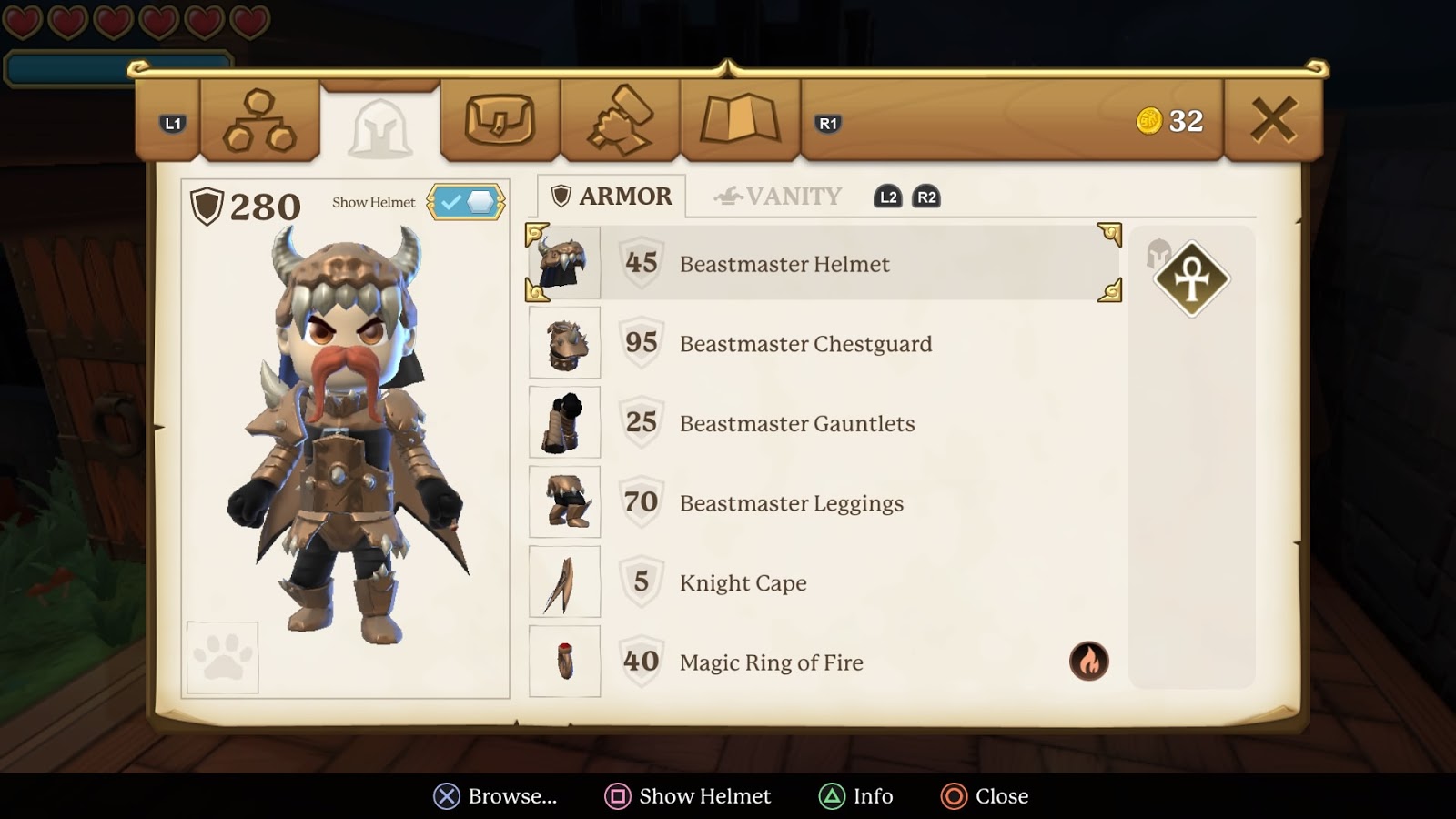 Portal Knights does not really have a narrative. A lot like the souls series, the narrative is in your actions. What you do and how you do it tells a story that may be completely different than how someone else went about it. Having randomly generated floating islands helps this fact but nothing will happen if you don’t get moving from your original starting point.

Starting off players will have the ability to create a character, customize them with the available options in which some had some rather epic beards (which is a sore point as most devs don’t include decent facial hair so good on the choices Keen Games!), and then start off a new world or join in an existing one. A very nice touch is that your first character will have plenty of quest popups in order to learn the basics but the subsequent characters are free to do as they please.

Character classes come in the three classic flavours. Fighter. Mage. Ranger (interchangeable with Rogue). Male, female, female with a beard as you are allowed and Dwarves should not be judged, the world opens up to you and it’s in your hands to figure it out. What was nice is that “figuring” it out wasn’t overtly complication and needing to think so far out of left field that you never would have guessed it without a Wiki. Odds are that if you can’t do something at that point in time it’s because you haven’t encountered what you needed yet and you should continue on in order to find what’s missing. 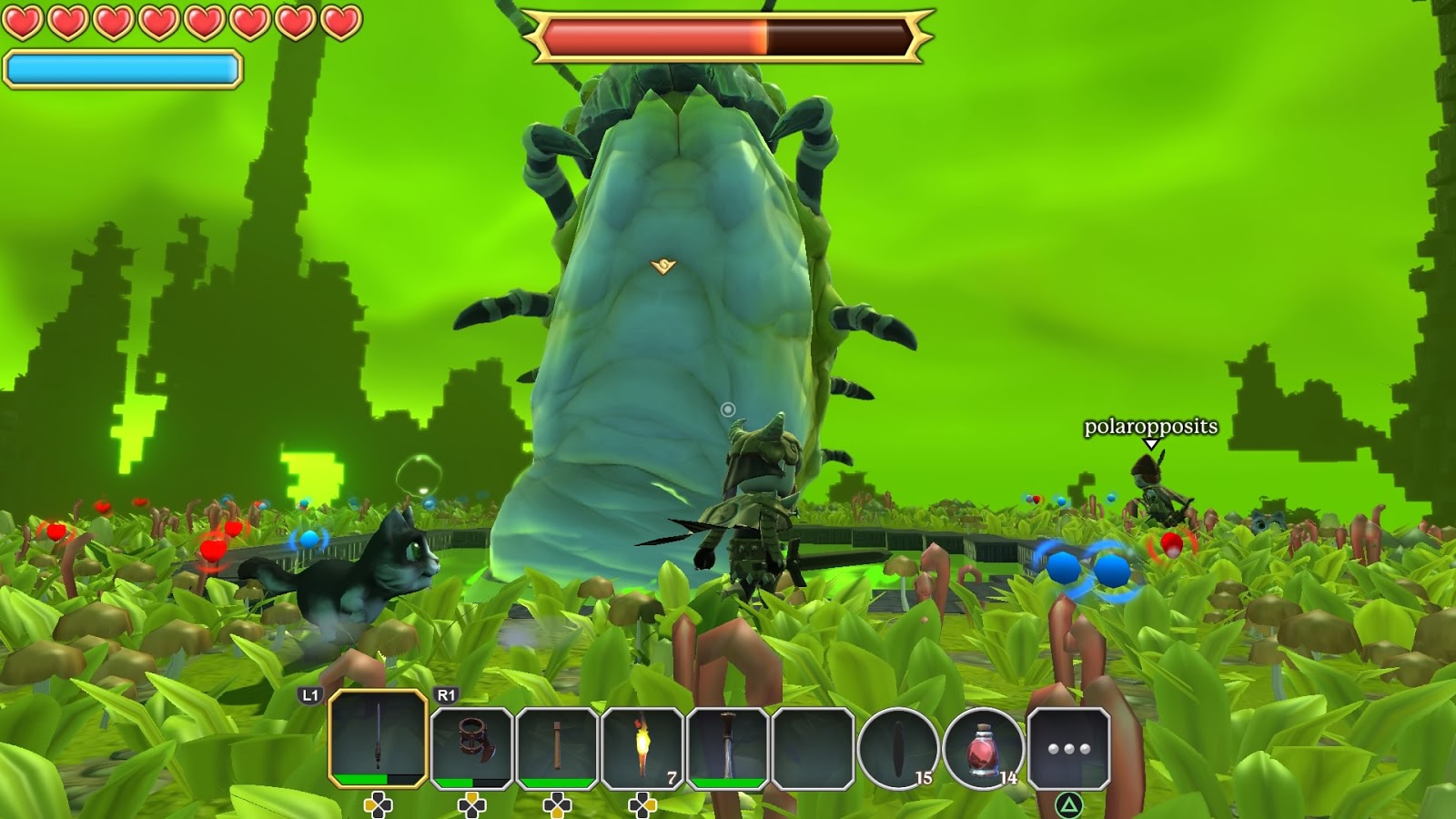 The character’s themselves play differently from one another but similar enough that re-starting with another character isn’t overly jarring. Fighters swing their weapons and hit things up close and personally,. Rangers pick off their targets from afar with their bows and Wizards blast enemies with their magic. Each class can gain access to a variety of equipment that increases in defense or in some cases change up the style of combat. Wizards for example start off with Wands, gain access to spells, and then can craft themselves a stave or a scythe to fight enemies up close and personal. They won’t be as effective as a Fighter but knowing that you can slash at anyone that comes in too close when your mana runs out is a bit more comforting than worrying about the distance needed to keep you safe while waving your wand.

What hit both Breanna and I the most about Portal Knights is the balance that was found between being an Action Adventure RPG and a good Sandbox experience. Characters as they level up gain ability points that are placed according to their class as well as a few extra to be placed as you see fit. Being a Wizard designed to take a hit can be a thing or a Warrior who’s much lighter on his feet and can move faster than the Ranger.

Adding to the ability points are a Perk System that at various levels unlock several options to better customize your character and possibly suit your playstyle. Having chosen the Fighter as my main character in order to take the main stage while Breanna sniped from afar I went with the more defensive perks designed to help me stay alive. In certain areas however with the elevation being in our favour I was able to change these perks in order to boost the amount of damage that she could do while firing on the enemies that could do nothing about it. You aren’t locked into your choices and it’s not a hassle in order to change which was great. 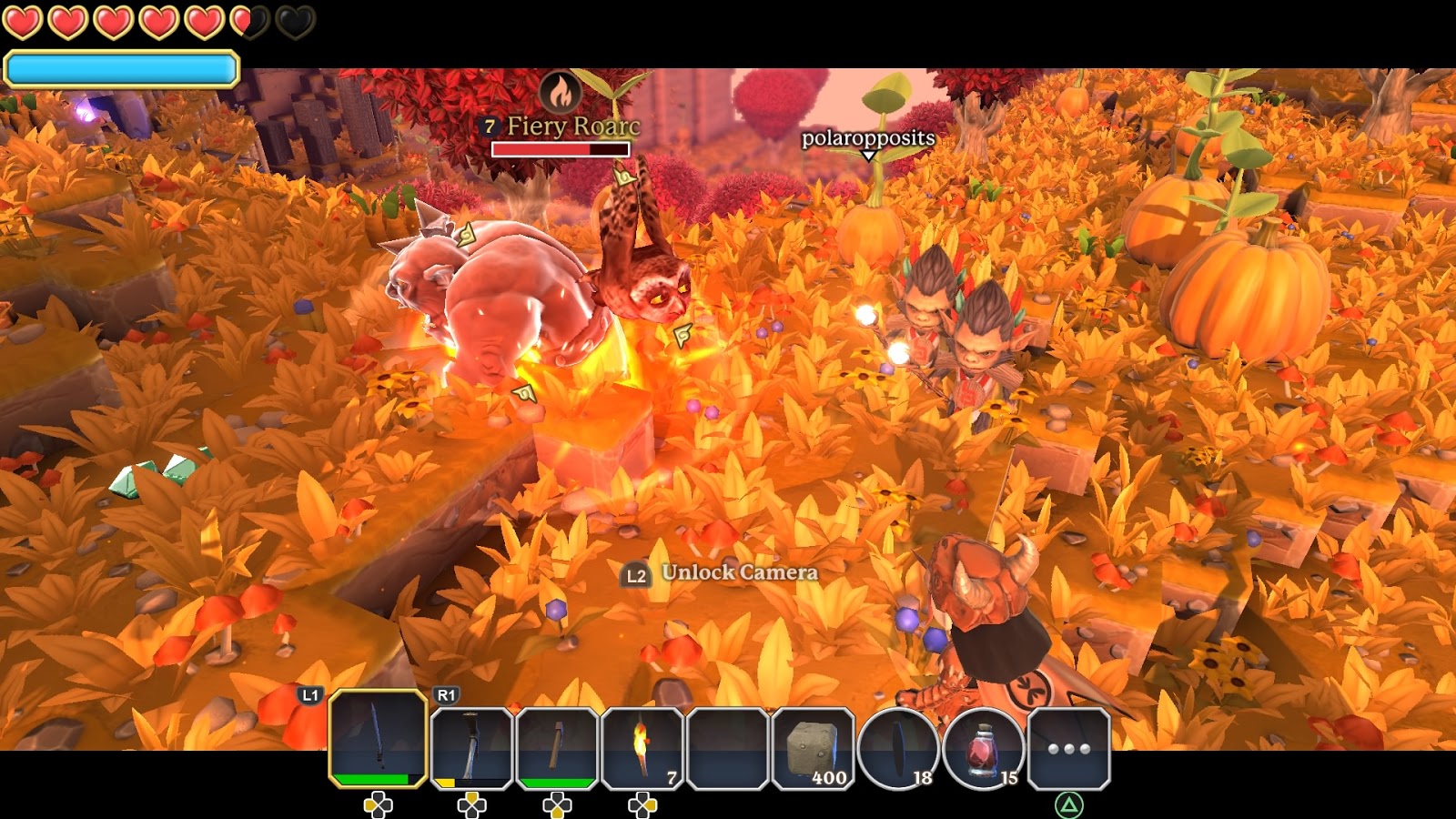 Combat itself is fun. Yes you level, yes you gain ability points and perks, but the actual combat is much more than swinging your weapon around. As you engage an enemy the screen goes into a “cinematic mode” in which your target and you are locked onto one another and you can dance around with dodge rolling instead of taking a hit to the face and losing hit points. It’s more immersive than combat in Minecraft for example in which you hope that your enemy dies before you do. If you die however? Like in Dragon Quest you’ll respawn as lost a percentage of your current monetary saving. At least it’s not 50%!

Now while there is a decent amount of combat there is an equal amount of exploration involved before even thinking of crafting. Procedurally generated environments will offer up a bounty of materials from cotton to lumber to diamonds in the rough. Ok I couldn’t help that last one but Rubies? Sapphires? Seeds? Resin and so much more can be picked up in order to make into equipment or other materials with. This is where things got interesting.

With all of the islands that you can explore you don’t need need to worry about missing something by moving on as any island that has been visited can be re-visited later. The reason that this is important is because you can assign any one of these to be your “home”. Home, other than being nice to have one, is where you can set up your base of operations which should be given a decent amount of space to work out of because you’ll need it. 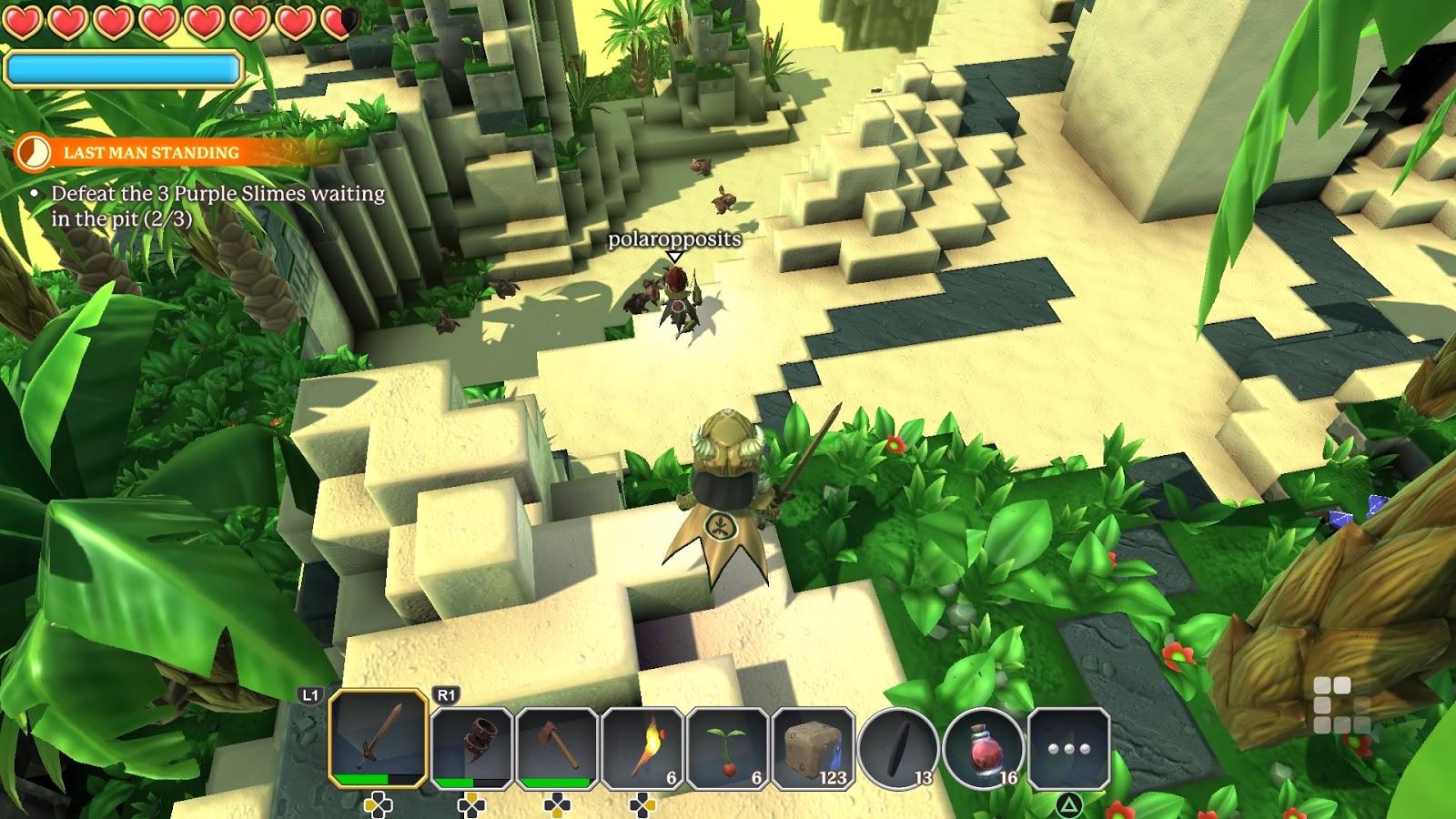 Crafting tables, forges, archery stands, alters, drafting tables will all need to be set up in order to do all the processing for the various pieces of equipment or materials that you’ll be making. Alters for example can either crush or refine gem ores while the furnace can smelt copper, iron or stone blocks to build your base if you didn’t want to go the wood route. All the options are there and even better than having the options is that you don’t need to worry about making “corner” or “edge” pieces as the algorithms take care of this for you allowing you simply mass produce the material you want without having to worry about the trims. Those are thrown in for you!

All in all if Portal Knights were to have any “issues”, it would be the camera angles when elevation is concerned but only in regards to combat because you can’t see what you’re doing. This basically only really happens when lots of trees are involved or you’re in a close proximity mineshaft or dungeon. Otherwise brilliantly provided is the ability to switch from the default third person view into a first person one to better slot your building blocks into place or mine the materials that you need to build them.

All of these features wrap up into one hell of an experience. It has crafting, it has exploration, it has building, it has combat, it has leveling up, it has perks! It has everything and allows you to experience it with someone else making it even better. Portal Knights I’m willing to say may be setting the bar for Action Adventure RPG Sandboxes and while it’s fun to play alone, it’s even better with a partner! 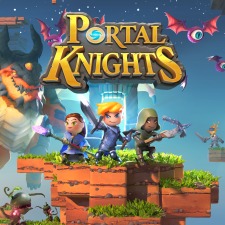 Article by Pierre-Yves and Breanna