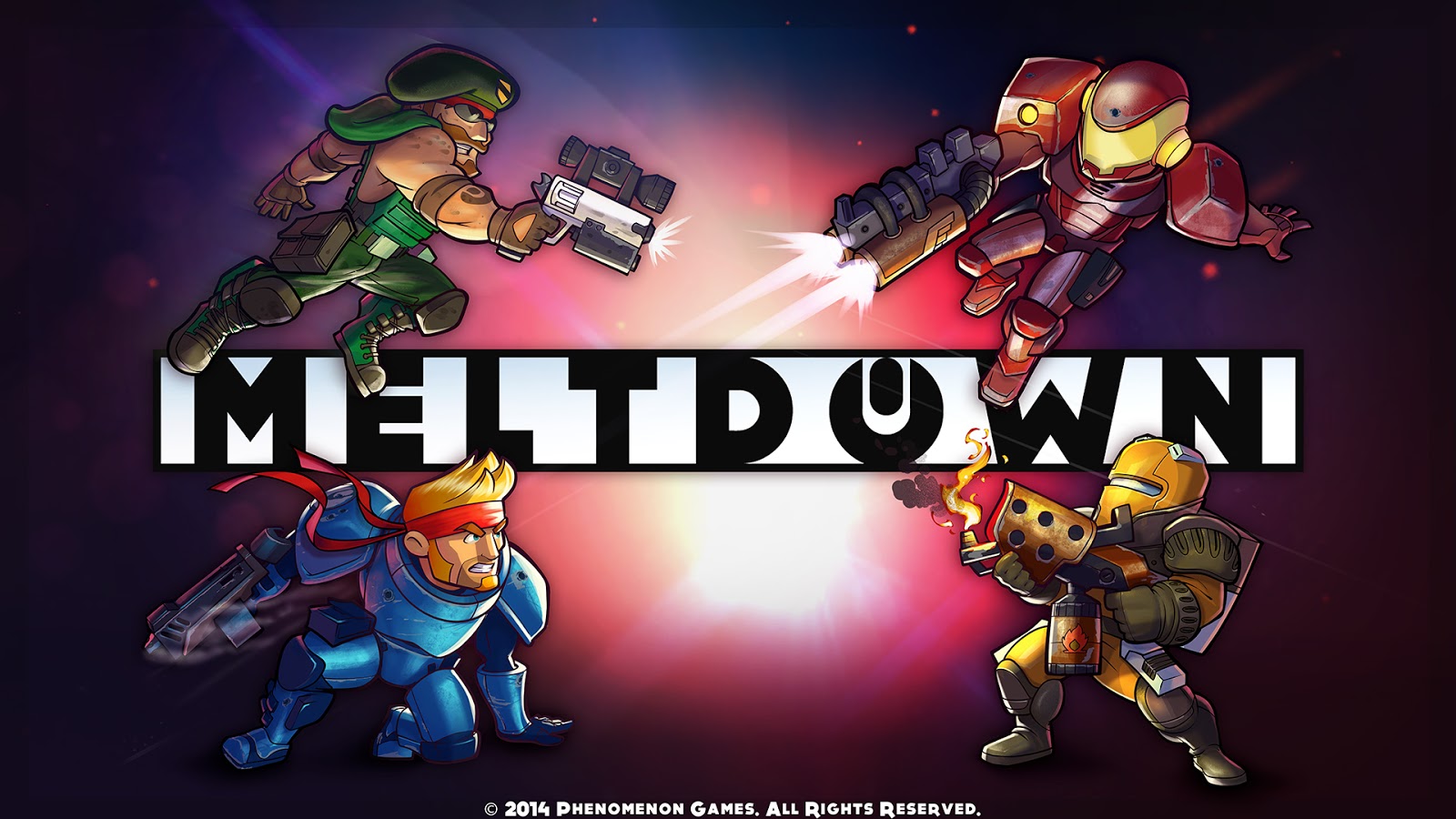 Next up on my trek through Utomik was Meltdown, an isometric Action Arcade Shooter “RPG”. Staring Zed who must have been Solid Snake in a previous life, he must move throughout a facility where the AI has melted down and is on a permanent kill mode.

Meltdown, other than seeming like it followed the plot to a bad Horror B-Movie plot (which are my favorite by the way), felt a bit like Fight the Dragon but in a Science Fiction setting. Set with a raised third-person camera view players will be moving Zed through different killer robot infested environments while using whatever is close by for cover. Using a simplified controller scheme Zed will automatically duck into cover as long as you move him close enough but watch out as some robots will simply fly over while others will jump kick their way to him.

Keeping controls simple, as mentioned the cover system is automatically done and adding to that so is the aiming. Zed’s crosshairs will pick the first target that comes out of the woodworks though if you need to change it a quick flick on the controller’s right thumb stick will take care of it. Because cover will not always be there for you depending on the situation Zed can also dodge roll out of the way which true to the older generation of games, dodge rolling also makes you move faster. From there the only thing left is which gun you wish to pull the trigger on or which melee weapon you want to swing. 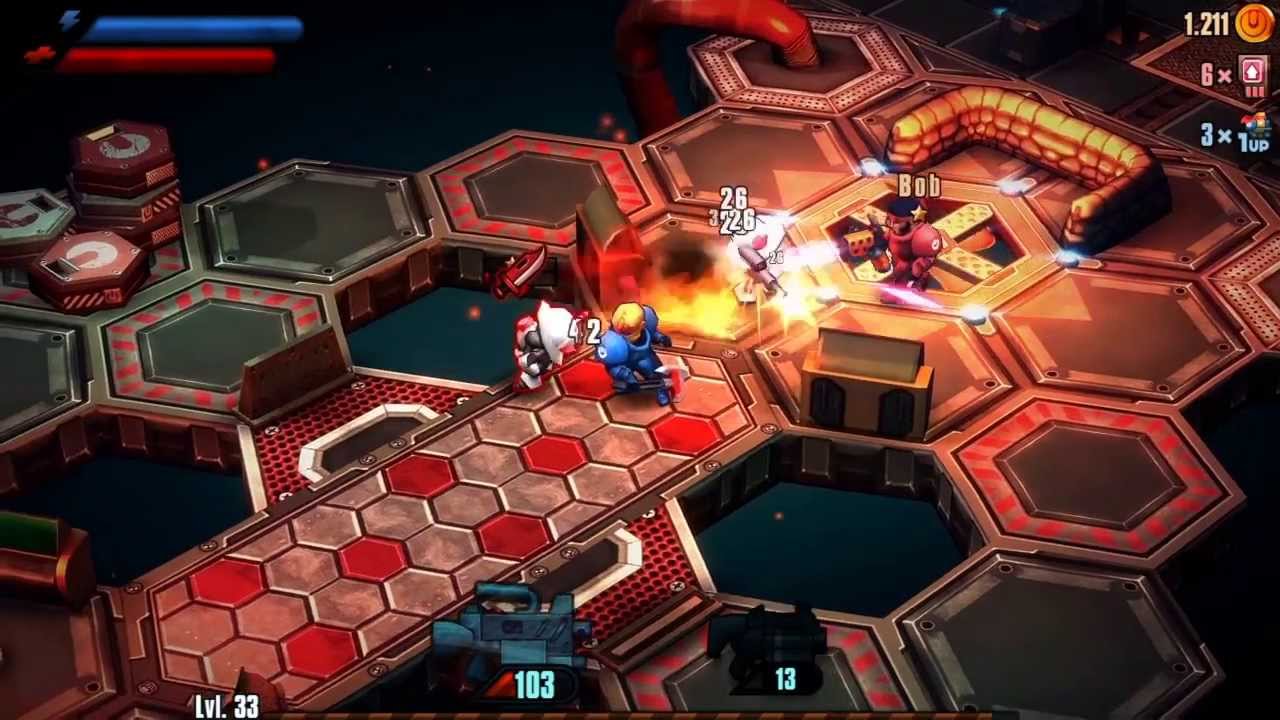 I appreciated the easy controls for Meltdown because it isn’t long before the difficulty raises itself making you need to either “git gud” or level up a little bit to survive the onslaught. Leveling up is easy with experience being gained for each robot that is taken out and bonus exp is granted both for your performance during the stage and for taking robots out with your melee weapon. Leveling up itself can be done between stages and instead of adding points to health, attack and defense, you can indirectly increase these by choosing from three separate skill trees.

Of the three trees, one is designed for weapon performance, one is designed for physical performance, and finally the last one is designed to keep you alive. Each of these trees works like a ladder in which each skill must be maxed out before moving to the next step. It isn’t so bad as it’s only three points but as leveling up becomes harder, or at least longer, you may become a bit more picky with your choices. The skills themselves come in the forms of weapon accuracy, ammo counts, melee damage, health upgrades and life leaching. The further you go up a tree’s ladder the better the skills but as mentioned it could take some time as your levels take more and more experience to gain. 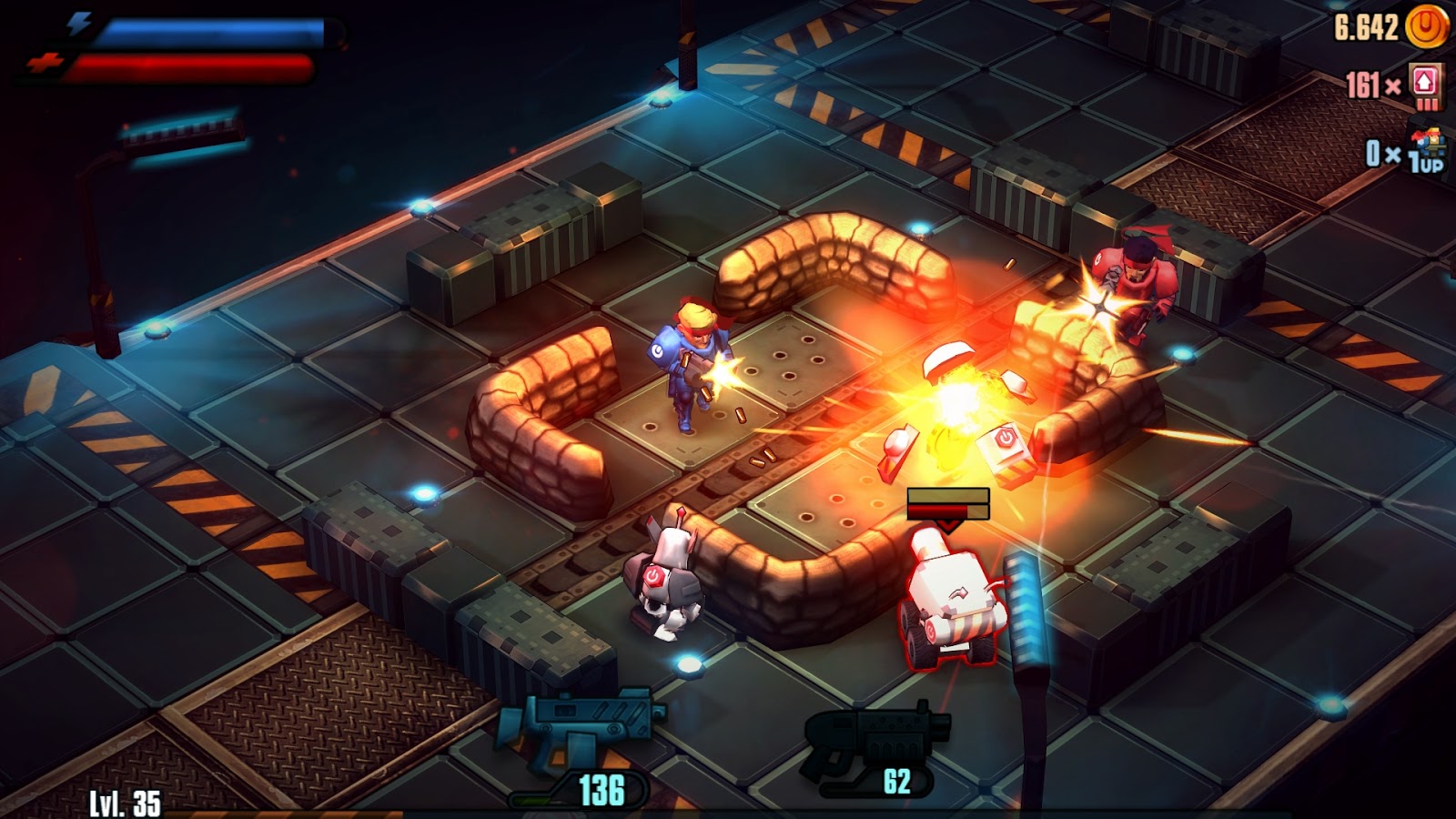 In order to support Zed, he gains access to buying new equipment as he levels up and even this equipment can be leveled up with upgrade chips and good old fashioned hard earned cash. You really have to earn this gear as money comes in slowly enough and by the point that you may have enough you have to decide. Is it worth buying something new? Or is it better to upgrade what you have? There’s no right answer but if you mess up on how you upgraded your gear there’s always a reset to try it differently. You already paid for it after all.

Meltdown is a good source of quick fun that can be picked up and put down whenever you need to. Built for long stretches just as much as short ones you can always invite a friend along to tackle the robots or join someone randomly online!