I’ve now had the pleasure of using Utomik for three months in which the wonderfully provided trial period ends Sunday. Over the past month we’ve had reviews in which came from the software with some being available when I started to use the service while others, like The Force Unleashed 2 (Coming Soon), were added afterwards through partnerships. I haven’t reviewed everything that I’ve played, otherwise I would still be writing, but I did have fun with what I had access to. Three months was a good time to put it through its paces and while some small details may still need a bit of work, the overall experience is one worth looking into especially if there are multiple titles that it has that are on your radar.

In case you originally missed it, we originally took a look at Utomik back in mid March. Utomik is a subscription based system that allows for any user to navigate the library, chose what they want to play, and play it within seconds as Utomik downloads what is needed to start off and then performs the rest of the download, especially on much larger games, in the background. Contrary to my original thoughts which I had mentioned, it is not a streaming service which means that anyone with low bandwidth caps or low speeds can enjoy the library’s content just as much as someone with unlimited bandwidth and high speeds as it really doesn’t take long to get a game started.

The interface is just as clean now as it was when I started using it. Games are separated by labels that can be viewed through “channels” that could either contain RPG titles, First Person Shooters, or titles that belong to specific developers or publishers like Deep Silver, Paradox, Disney (Star Wars) and THQ Nordic. Clicking on any of these channels will bring you into another window in which you can quickly see loads of thumbnails of the available titles. Want to play something? Simply click on “Play” and Utomik will take care of the rest. If you want to know more about a title there’s a Information Icon in the top right corner of any game’s thumbnail. Clicking on these will bring you over to a well laid out screen with the icon of the game, its description, the built in rating system and a video. Unfortunately it still doesn’t allow for the option to disable auto-playing the videos which for me isn’t an issue from a bandwidth perspective but it is from a “what if I don’t want to watch the video” perspective.

The auto-playing videos can also add up towards anyone’s monthly limits. The reason I would clock this as an issue is that if you live around where I do, only in the past year have we started to have internet for under 100$ that gives us more than 25mbps download speeds and “unlimited”. Prior to that? 100$ plans maybe gave us 20mbps with 120gb download limits. Let’s say that it didn’t take long before Breanna and I started to pay much more for the internet because checking the meter every day got very annoying very fast and anything that auto-played just added to the “please tell us we didn’t go over. Again.

The only issue that I could have with Utomik is that if you want to install anywhere but the default folder they are going to ask for administrative access each and every time that you wish to install something. As anyone with Window Vista and up knows, even with an administrator account you aren’t quite “using your admin rights” until you right click and say run and administrator. Because my PC runs off of an older and smaller Solid State Drive, all my games are on a much larger secondary hard drive meaning that anytime I wanted to download and install something new, I HAD to load Utomik with my administrator privileges instead of simply doing everything from a simple loading of the software. 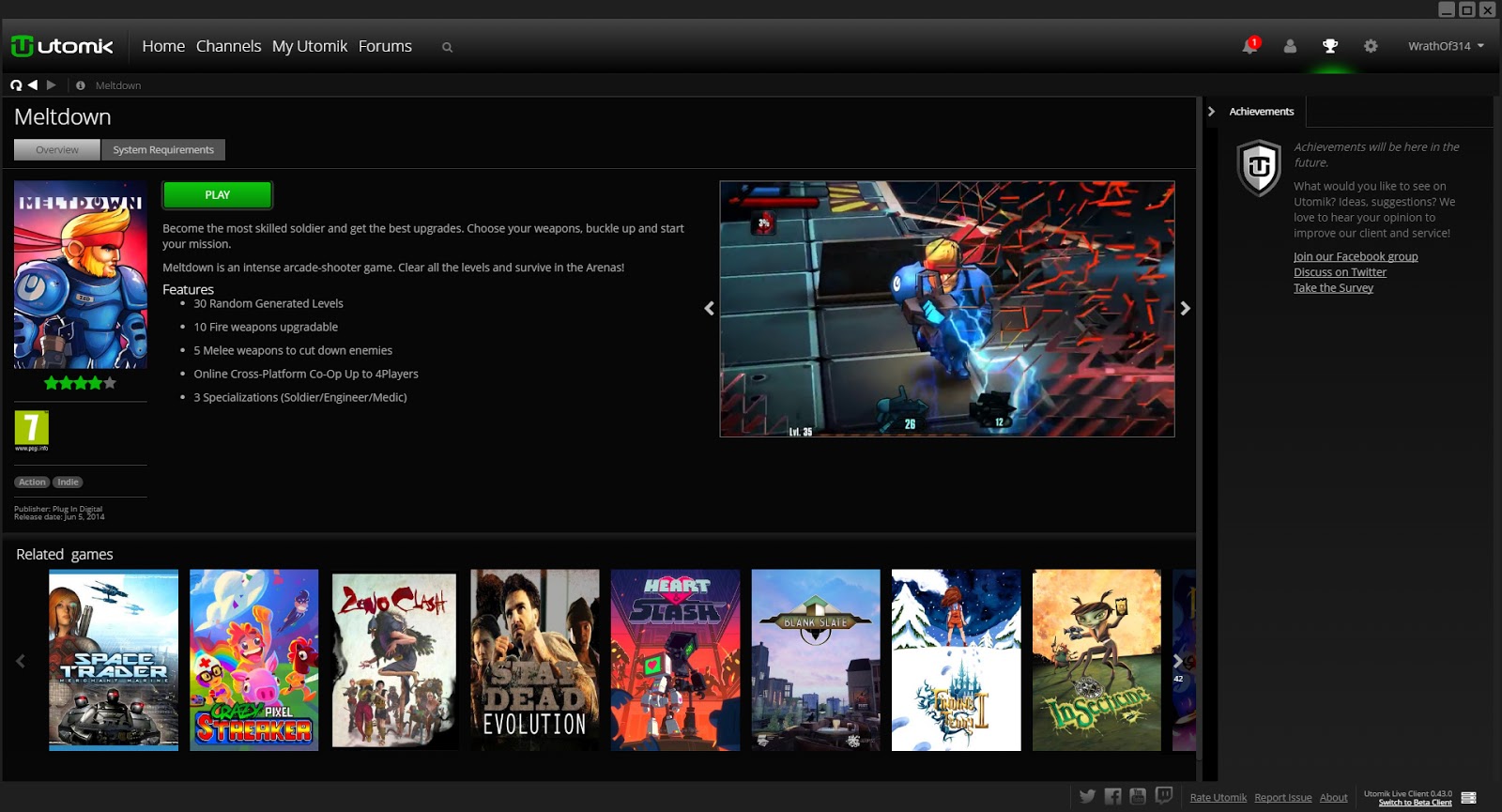 Once you’ve selected your game and you’re ready to play, just hit Play and the game will launch. Once loaded, some titles will automatically full screen while others will not. I wish there was an option on the window to do so but a quick “Alt-Enter” will do the trick as it does for most Indie RPGs out of an RPG Maker. From there on in the control schemes are at the mercy of how the title was created whether it be keyboard and mouse or if they enabled controller support.

Once you’re done playing simply quit and go about doing whatever else you wish to do. Once you do come back though, Utomik has made sure that it’s easy to find any title that you’ve already played or have loaded up in order to play later through your “My Utomik” tab. Simply clicking Play will bring you right back in and you don’t need to search the library for it. Want to remove a game from your system? Simply switching the view from Dashboard to Manage games and clicking the “+” on any title will allow you to see how much space it’s taking up while also giving the option to uninstall with no hassles.

Features that are there but work “iffyly” are the clocks under your profile as Aurion alone the first time that I sat down to it was for about four hours. The clock says that I have a total of four hours and I’ve played hours of Onion Force, Meltdown, Space Hack and Force Unleashed 2 alone. So that needs a bit of work but since it’s not V1 yet that’s not so bad. Trophies / Achievements are on their way at some point because everyone loves those possible bragging rights. A friend of mine sends me his platinum trophies every time he gets a new one. I think he’s sitting somewhere in the seventies so they do make a good incentive for some. 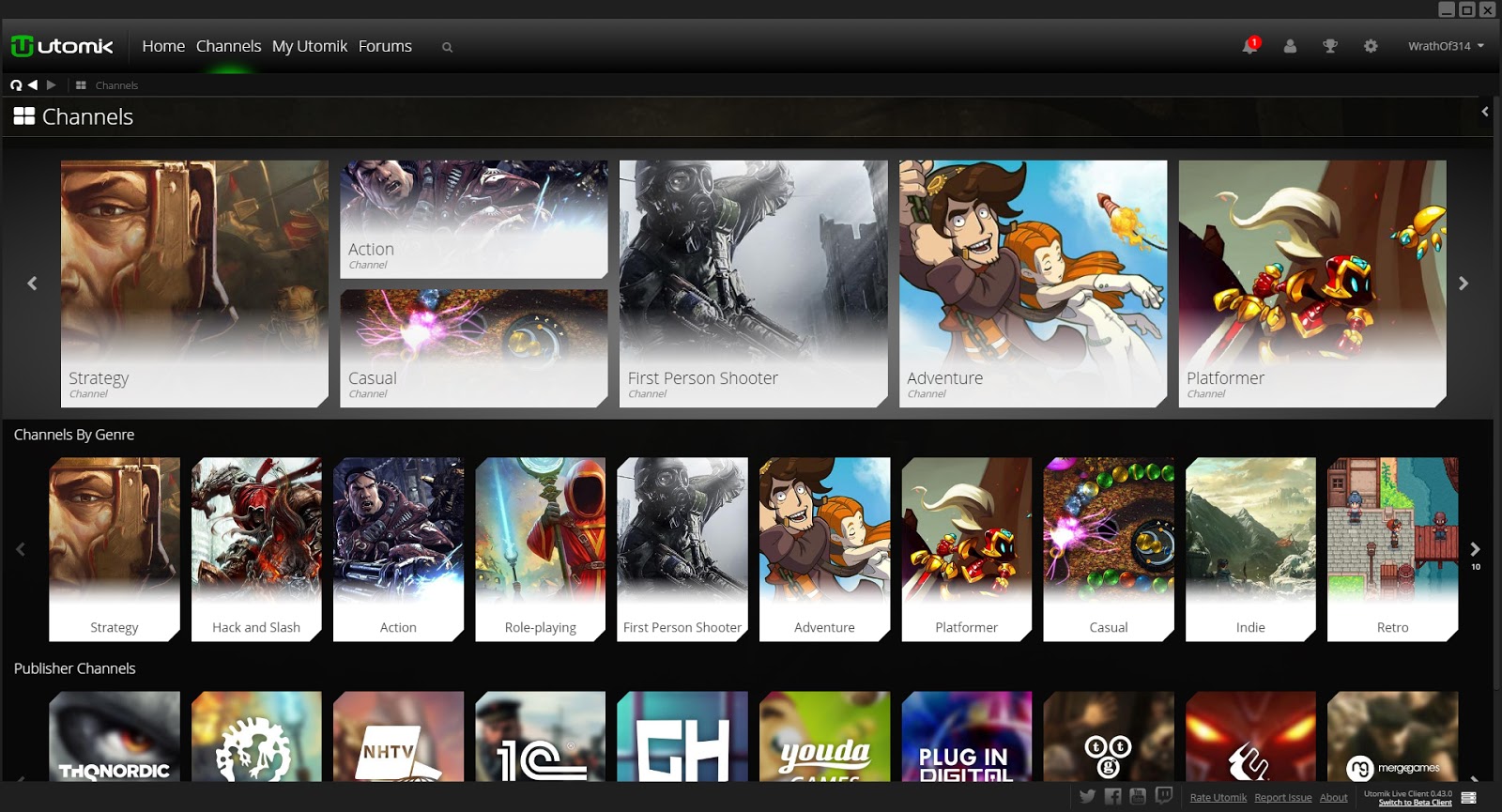 There are still a few items that need to go into production as Utomik is currently sitting at Version “0.43.0”, but even at that, I’m willing to score it before its full release which could take some time. Having a Steam, PSN, Xbox Live, Nintendo eShop as well as a GoG and a Humble Bundle account, I would recommend looking into Utomik. Being able to experience a vast and still growing library with a low monthly fee instead of having to buy everything piece by piece was a nice change of pace especially since there were several titles that I had been wanting to play. 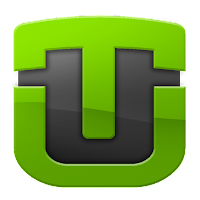