comments Share
You are reading
Children of Zodiarcs – PS4 Review 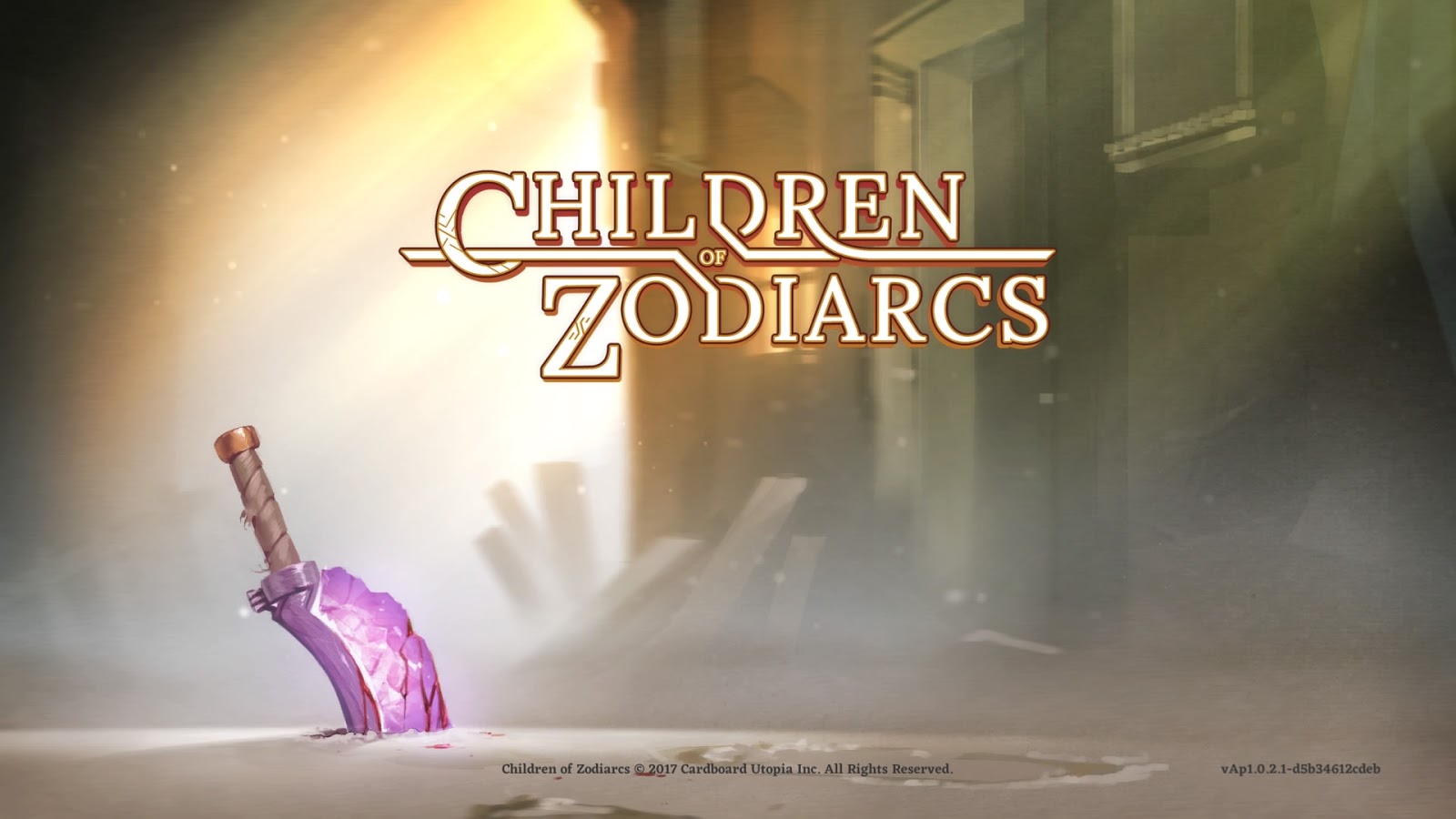 Cardboard Utopia’s Children of Zodiarcs is the next “Final Fantasy Tactics” that you’ve been waiting for. While there may not be classes for your characters to switch between, dive into a world based on dice rolls and the luck of the draw as a group of children try to survive by stealing from the rich in order to buy enough food to survive.

It’s really hard to not make certain levels of comparison to what I consider one of Square’s greatest masterpieces. While the top down third person isometric view is nothing new, there’s an immense sense of nostalgia that comes from the artwork used to create the blocky planes that your characters will travel over. There are plenty of elements that Cardboard Utopia have created to make it their own, but when it comes down to it, they’ve given us what we could have only wished Square had and I’m not talking about Final Fantasy Tactics Advanced.

Children of Zodiarcs is brilliant. Instead of just making another SRPG they’ve gone and added in multiple different ideas that work very well together. One of the biggest changes is that instead of having hidden number crunching for damage values they’ve put in a dice rolling system that allows for you, the player, to either take them and roll them across the screen or select “auto-roll” to speed up battle a little bit. 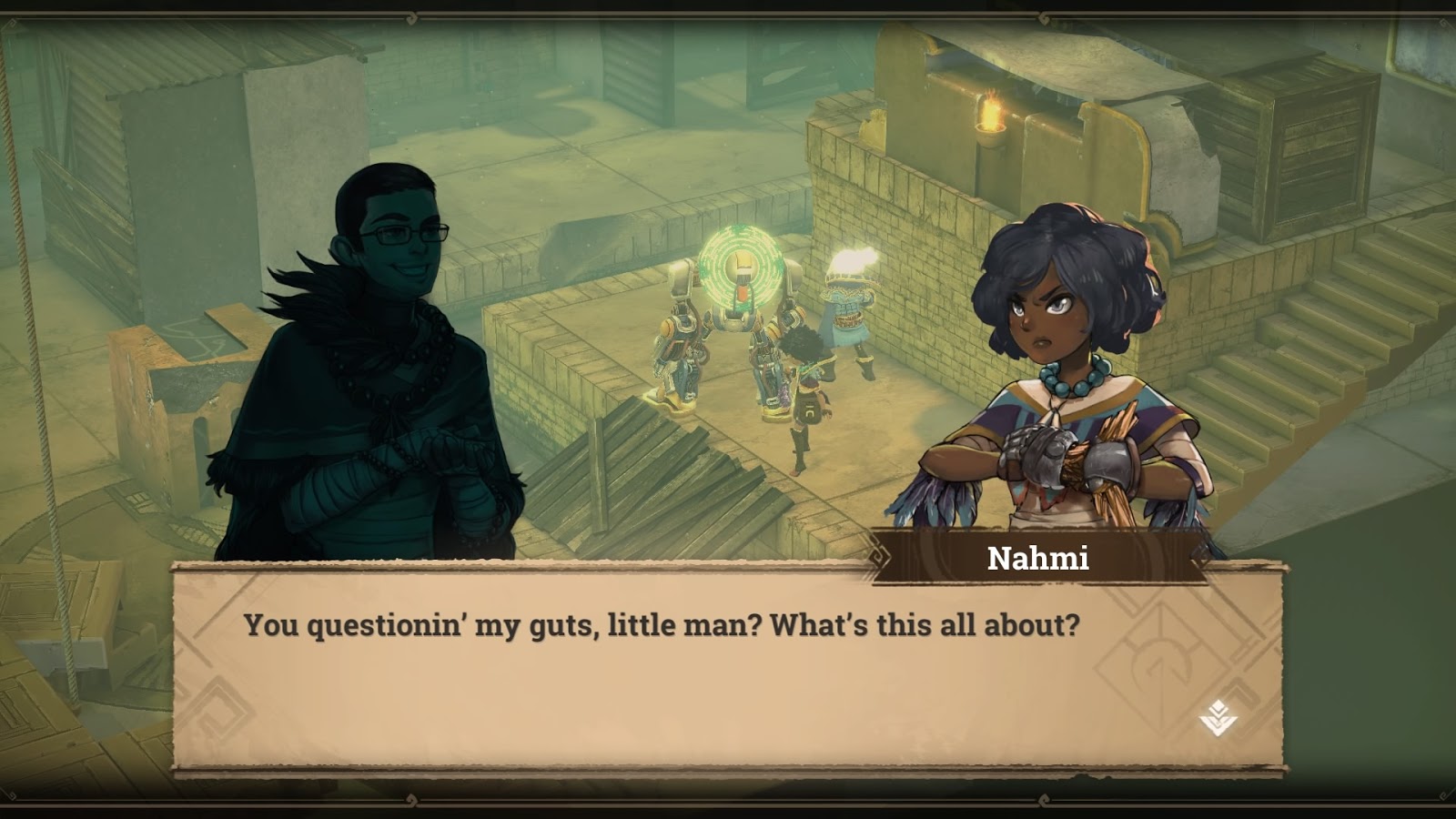 While that alone is cool, they allow you to re-roll two dice that you may have not have enjoyed the results of. In auto-rolling this is done instantaneously but rolling the dice of your fate yourself? If you throw the dice hard enough they can bounce around and possibly if you’re lucky enough chance the value of another dice already on the “board”. Just make sure not to change one that you were happy with the result of!

The dice alone were a neat addition to the style in order to make your attacks but it’s what these dice go along with that really make this SRPG a game of chance. On top of having sets of dice you also have a deck of cards to pull abilities out of. No cards. No actions. In order to do anything a character on the field needs to have access to a card before being able to roll the dice. Thankfully every enemy is subject to these exact rules which makes cards with abilities to draw extra or make someone discard that much more potent especially when extra turns are involved.

As your characters level up they gain access to new cards and receive upgrades for older ones. This makes it that older starting cards don’t become useless and are always relevant making the assembly of your deck a good thing to keep your eye on. I really appreciated this because you can “stack the deck” in favour of how you deem the character fit to be used and not some predetermined value that the developers set. While I appreciate the effort that devs can put into these situations, sometimes having your own personal flavour is what you need. 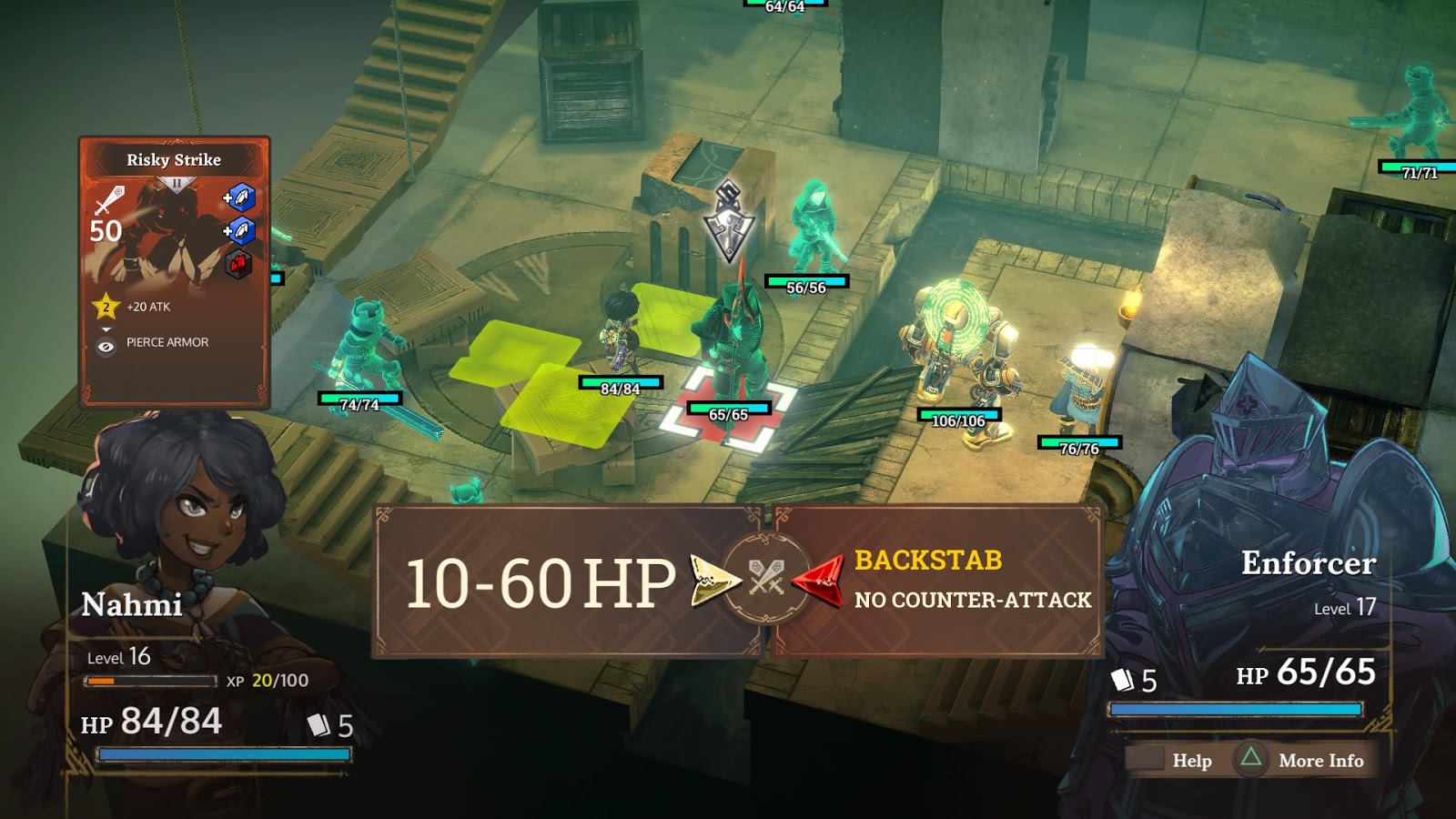 What’s interesting about the deck building is the level of control that if given to you. Each card comes in a “set” and you can chose how many of that set you wish to throw into your deck. Want six of the six healing cards stacked in? Go for it. Want to reduce that amount because that character tends to be further back and instead make sure that you have more attack cards? Go nuts. Even support cards to add or remove other people’s cards can be treated the same way and there’ll be a lot of experimentation on this because what you may think works may over saturate your deck making it a lot harder to pull off the combinations that you were thinking about.

Now just because you have a deck of however many cards doesn’t mean that you can have access to all of them on the field. A maximum of seven cards can be held at any time and anyone passing this limit will automatically discard the leftmost card(s) until there are only seven being held. Normally it’s not an issue but when it happens and you do go over by four cards due to a stellar combination of abilities and dice rolls, it sucks to see that many cards thrown out especially if you weren’t expecting it. It’s another thing to watch out for!

I was a bit worried at first as even on the normal difficulty Zodiarcs isn’t easy. Because of the luck based system in place some battles could be a bit harder than they needed to be but that’s because you really have to make due with what you have. The flipside of this is that the story is a bit on rails meaning that you simply move from one mission to the next. Getting new cards comes with leveling while getting new dice comes from winning battles. Modifying these new dice sets can be done but only if you have the materials in the form of other dice to pull it off. So where was almost the issue is that if your party’s levels are not high enough some battles are tough because as much as you need to rely on your dice rolls you also have to rely on your character attack and defense stats. 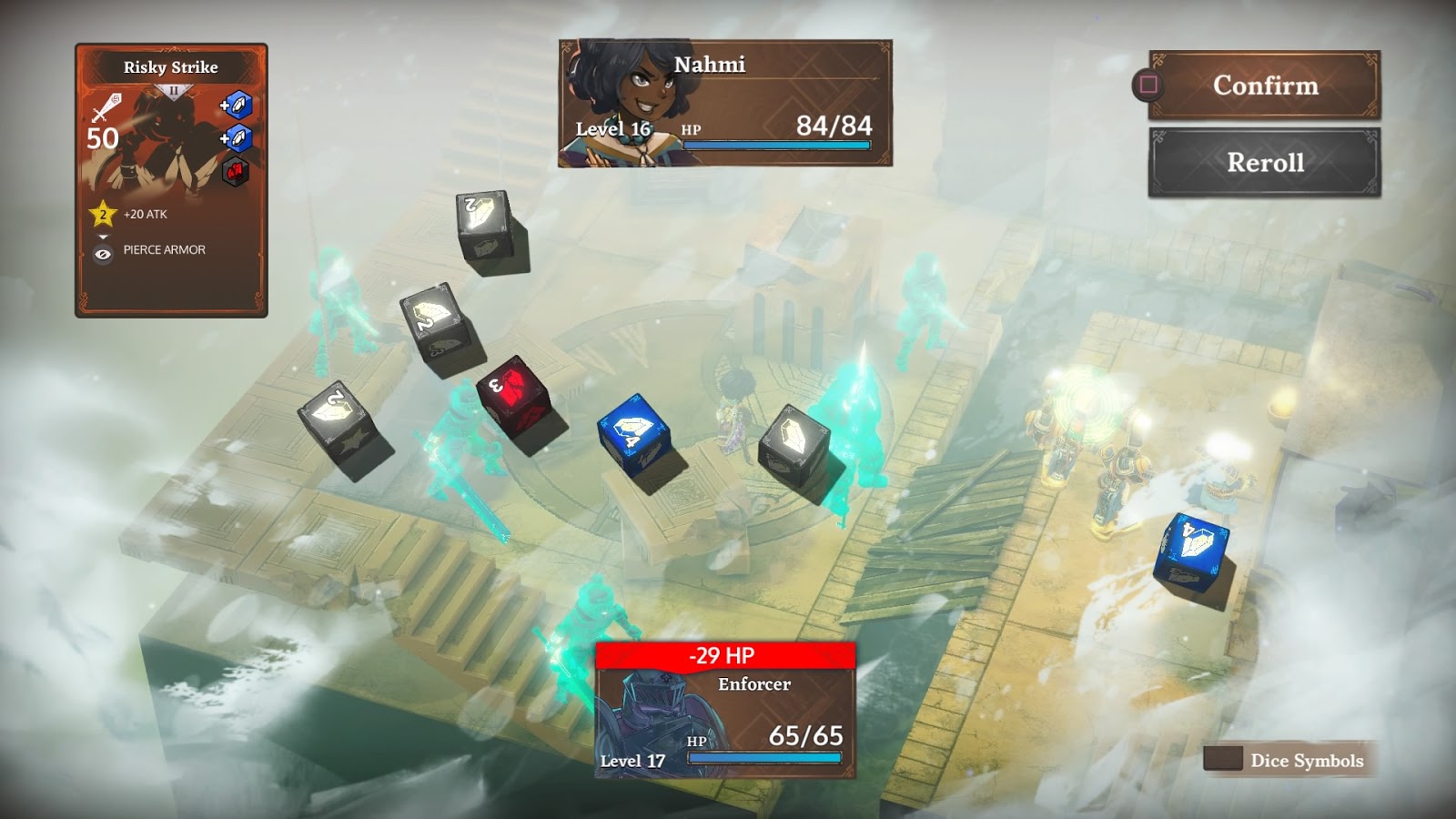 Thankfully several missions in this worry was alleviated through skirmishes that open up on previously conquered stages. This served two purposes. The first purpose was that it allowed you to level up your party, their stats and collect new dice. All of these help gear up for the later stages that really do not hold their punches. The second purpose is that it allows you to try out your new decks before moving forward to even harder situations. I wanted to say it allows you to try out new decks in situations that don’t matter but the fact of the matter is that if you don’t succeed in a skirmish, it’s game over. Elite skirmishes are also there which raise the bar and the rewards but the game over is even easier to get a hold of you and your party.

On the whole of the experience the only issue that I had was the speed of gameplay. It wasn’t as noticeable in the early stages but it does become apparent hours in when things really get “real”. Having the dice rolling automatic will save time but having to watch each and every enemy move across the map could be enough time at times to go do other things. In the later stages if I was facing six to ten enemies I would play my turn and head off to do chores or make supper. I kid you not, I had that much time. There’s no way to speed it up and it can take some serious time for EVERYONE to go through their actions. I hope that either a skip or speed up function can be added in the future.

Now while things can take some time I had a huge appreciation for the little details. Instead of simply poofing out of existence character models would either fall down where they were or fall off of what they were on. If an enemy for example was on a rooftop then they would fall off the side once they were taken out instead of just falling in place. Explosives would send a dispatched enemy flying in regards to where they were standing in relation to the blast. All of these elements were neat to see thought of instead of just models standing in place and then being gone once their hit points hit zero. 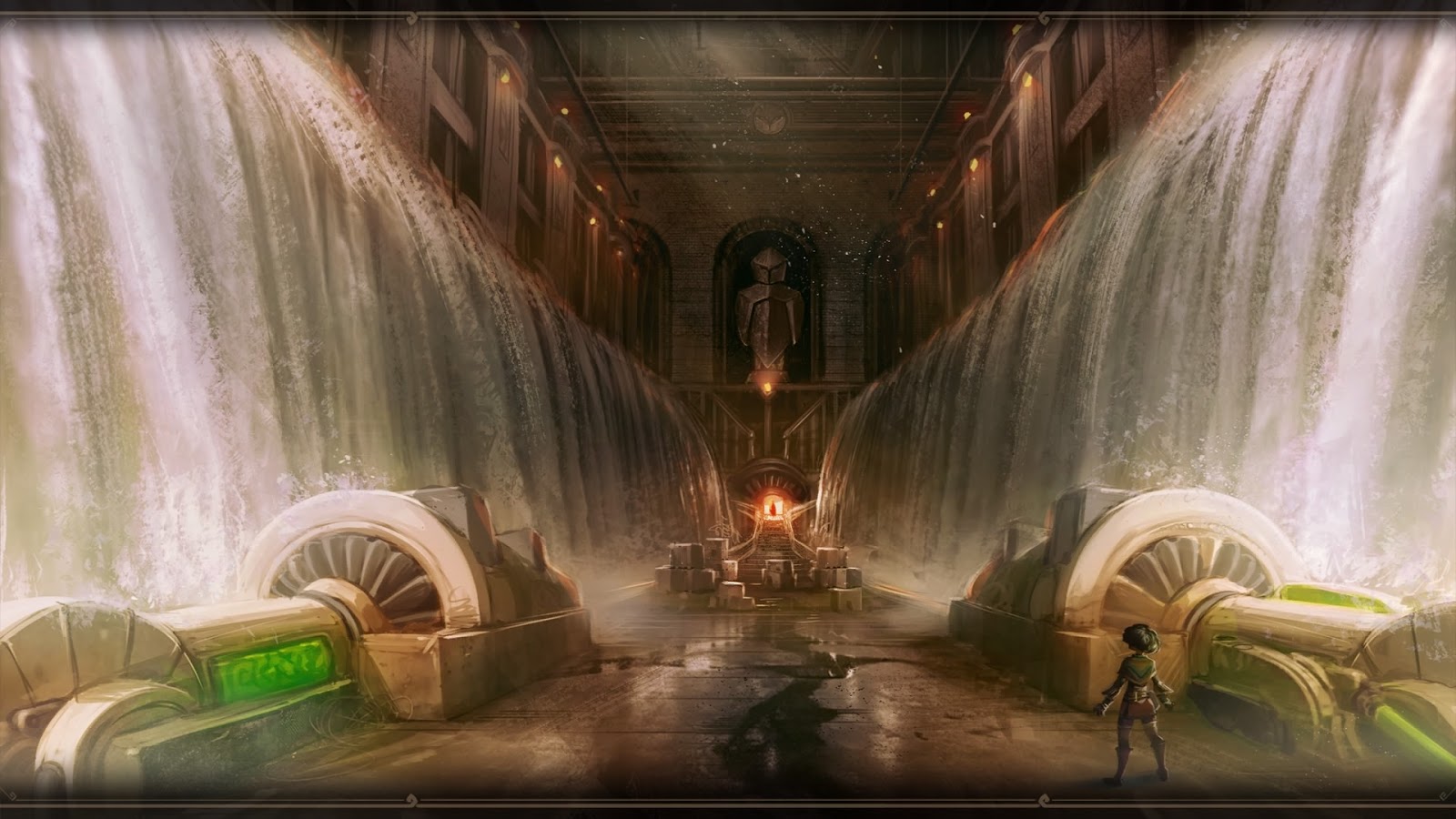 Children of Zodiarcs is a turned based strategy that I’ve been waiting for. While some elements will be familiar to fans of the style it was the elements that weren’t that made this experience a masterpiece. Rolling the dice and splitting the deck became more than simple battle mechanics but were instead much more as they alone were half the battle. Without good dice rolls or drawing of the cards an easy battle could very readily become an easy defeat. 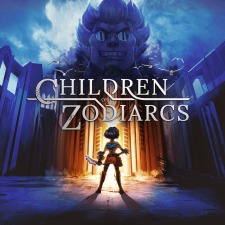