After about a good thirty to forty hours and thinking about how to best describe Fortnite it hit me. Welcome back to Horde Mode!

Love it or hate it, Epic Games’ Gears of War’s Horde Mode can be a blast. If you view that style of Tower Defense as a base game, it can easily explain why the core gameplay of Fortnite is already solid with its third person shooter mechanics that allow you build up defenses in order to protect your objectives. Is it a copy and a paste from their previous work? No. Fortnite stands apart from Gears both in terms of graphics and in its mechanics, which can be very addictive especially since they give you Llama Pinatas to break open for loot!

Note: If you consider some of the following to fall under “TL:DR”, skip to the gameplay section! Currently in Early Access, Fortnite is available on the PC, PS4 and XB1. Things for the most part are stable enough but every now and then hiccups occur or the servers lag a bit when someone joins in midway through a session. It should be noted that no save data is stored locally on the PC or on the console. All of this is stored in the cloud which leads to possibly my favorite feature. Playing across multiple systems.

Ok that last statement is only accurate from the point of view of the PS4, which I received a key for, and the PC. While there is no current cross play all you have to do is log into your Epic account and, because all of the data is server based, continue from where you left off on the other platform. So the best example of this is while playing on my own and joining random games I would play off of the PS4. If I was playing with my brother who picked it up and some of his friends I would load up the PC version and Discord to have a blast for hours at a time. Worried about losing out on PS4 trophies? No worries as these all auto-populate once the game has figured out how far you’ve gone.

Control wise Fortnite is configured just as much for the controller as it is for the keyboard and mouse. Want a keyboard and mouse on the PS4? The layout is available to customize on the interface. Fortnite has really been configured to offer the same experience regardless of the platform. That said? While blasting enemies away for hours at a time with a controller is smooth, the interface is much more quickly navigated with a mouse which on the PC it makes the switch instantaneously while I can’t comment for the PS4 as I didn’t plug in a mouse to my console. 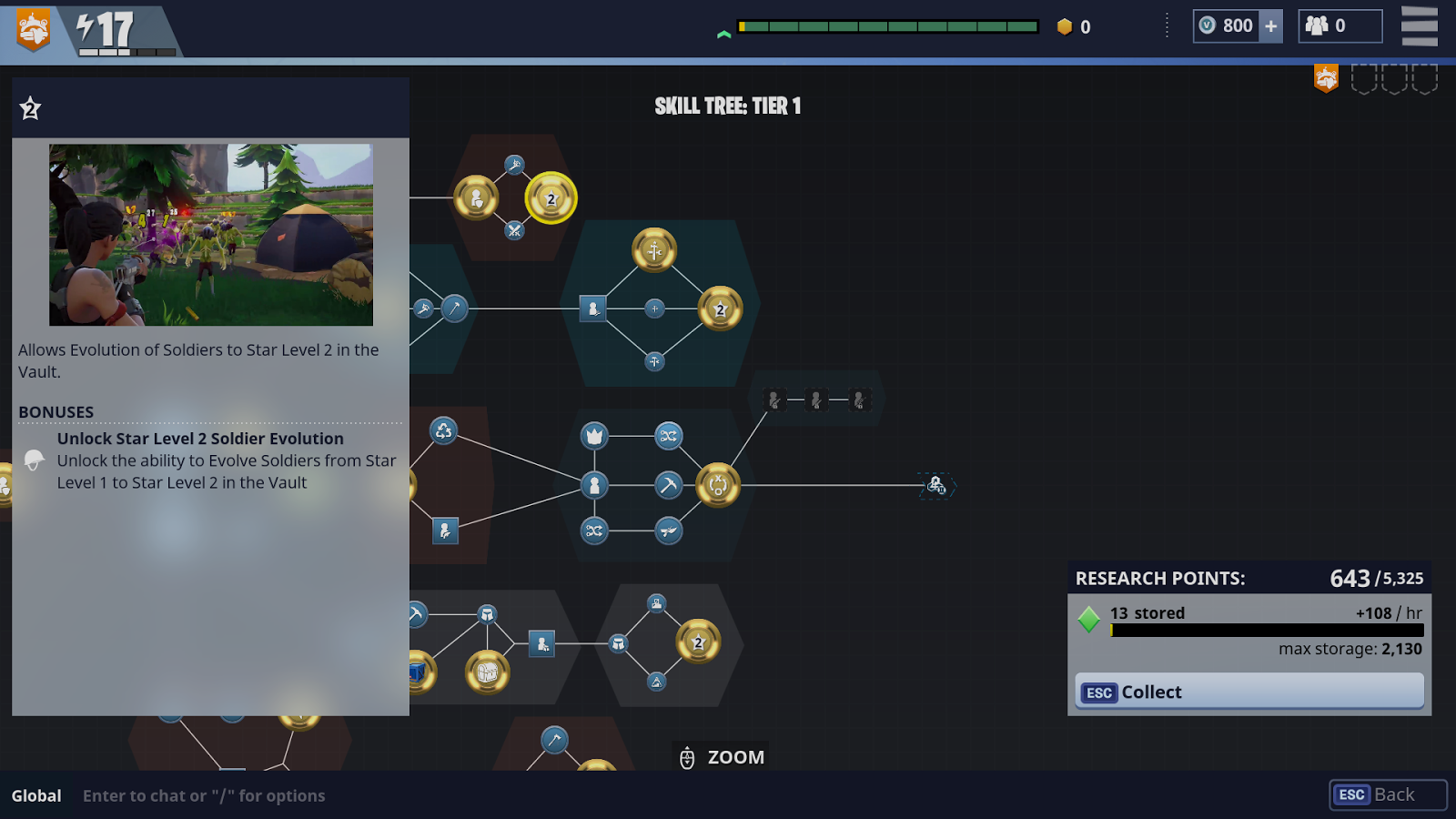 The concept behind Fortnite isn’t a new one by any means but it’s a lot of fun and follows the more the merrier approach. Everything is online so a good internet connection is required though if you get booted from the game because of a power outage or the game crashed then if you can load the game back up fast enough it’ll allow you to rejoin the session that you were in. You’ll lose your score, but you won’t lose your rewards or anything that you had done up until that point. It was nice to see that your spot is reserved and that someone else can’t simply come in and pick up where you’ve left off.

The basics of gameplay are the following. Starting off you are given a character in order to do the tutorial and learn the basics. You can move around the environments and mine for the three major resources and the components that you’ll need in order to build buildings and weapons. While in this environment you’ll also come across beings that used to be human and have since been turned into husks by the storm. Welcome to the Zombie Apocalypse!

In order to defend yourself from these creatures you’ll have access to swords, shovels, hammers, sniper rifles, machine guns, pistols and shotguns. Some of these will be picked up, others will be granted to you as a reward at the end of a mission. For the most part though, you’ll be building them from schematics which means that you really can’t skimp of collecting resources, or at least being smart about how you collect your resources.

The environments are not completely destructible though you’ll learn quickly enough that there’s more than enough lying about to collect. Trees give you wood (I mean who would have thought right?) but so do certain house walls, furniture and garage doors. Stone can be found mainly through both house siding and giant boulders. Steel which is the final of the three major resources can be found through cars, fences, posts and other random electronic or steel devices laying about. Of the three you’re more often than not going to collect other components through steel contraptions as much as you will by searching through houses, campsites and rubble left behind. 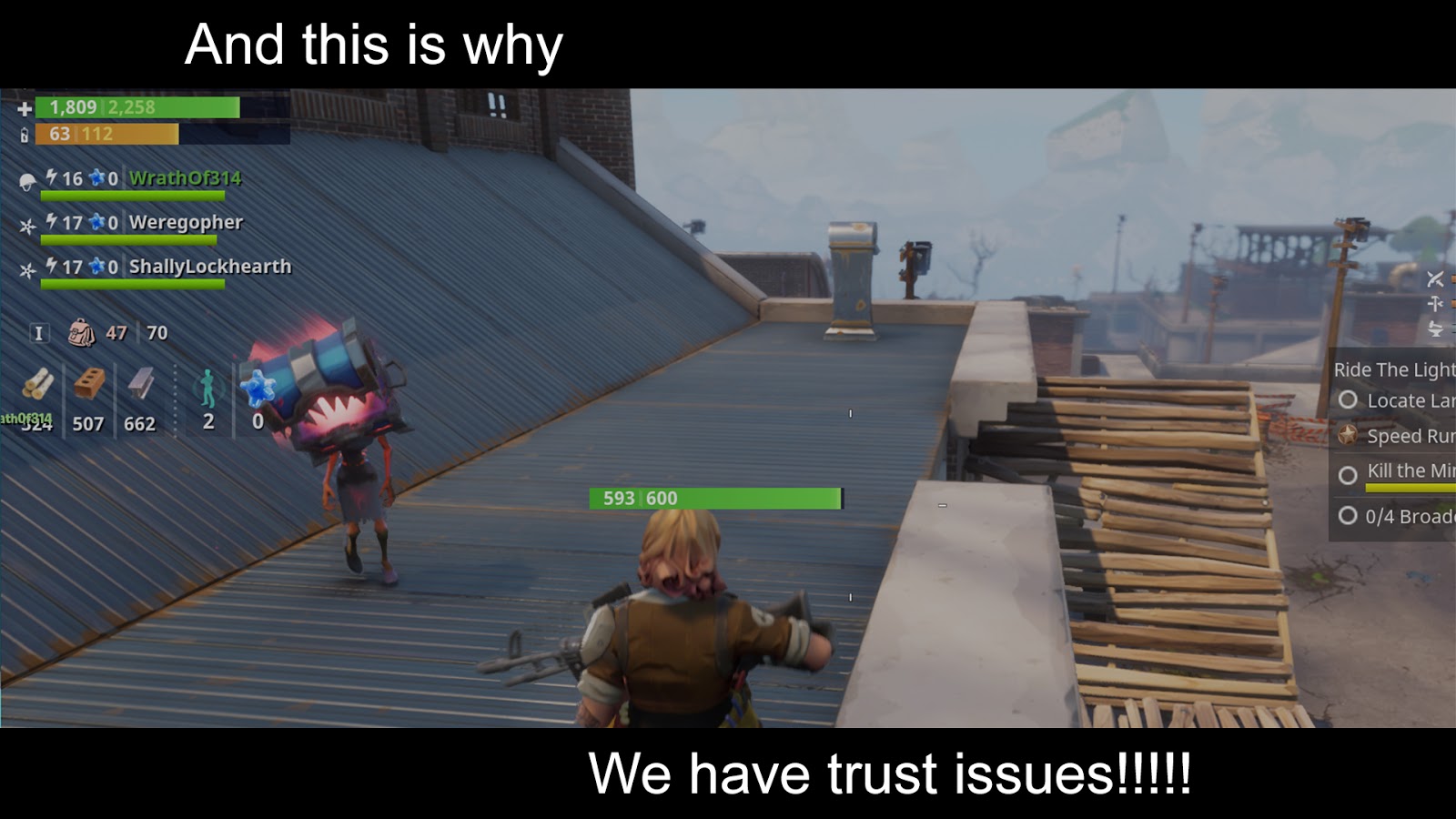 Once you have all of these then crafting is as easy as loading up a sub-menu and saying build. Once that’s done it’s added to your inventory and you’re good to go. Need ammo? Simply hold the reload button and ammo will be created as long as you have the resources on hand. All your crafting options will be done through schematics that are picked up through rewards or Loot Llamas that can be acquired either through in-game currency or through mission rewards.

Crafting new weapons can only be done during a mission / session while upgrading the schematics and leveling your heroes can only be done through the main menus. I’ve now mentioned Llamas a few times and the reason for that is that short of the mission rewards, and you’ll be playing a fair amount, you’ll want to aim for getting Llama Pinatas. These Pinatas are basically loot crates that are random in nature and can give you either a mother-load or a mere pittance depending upon the lords of the random generators. 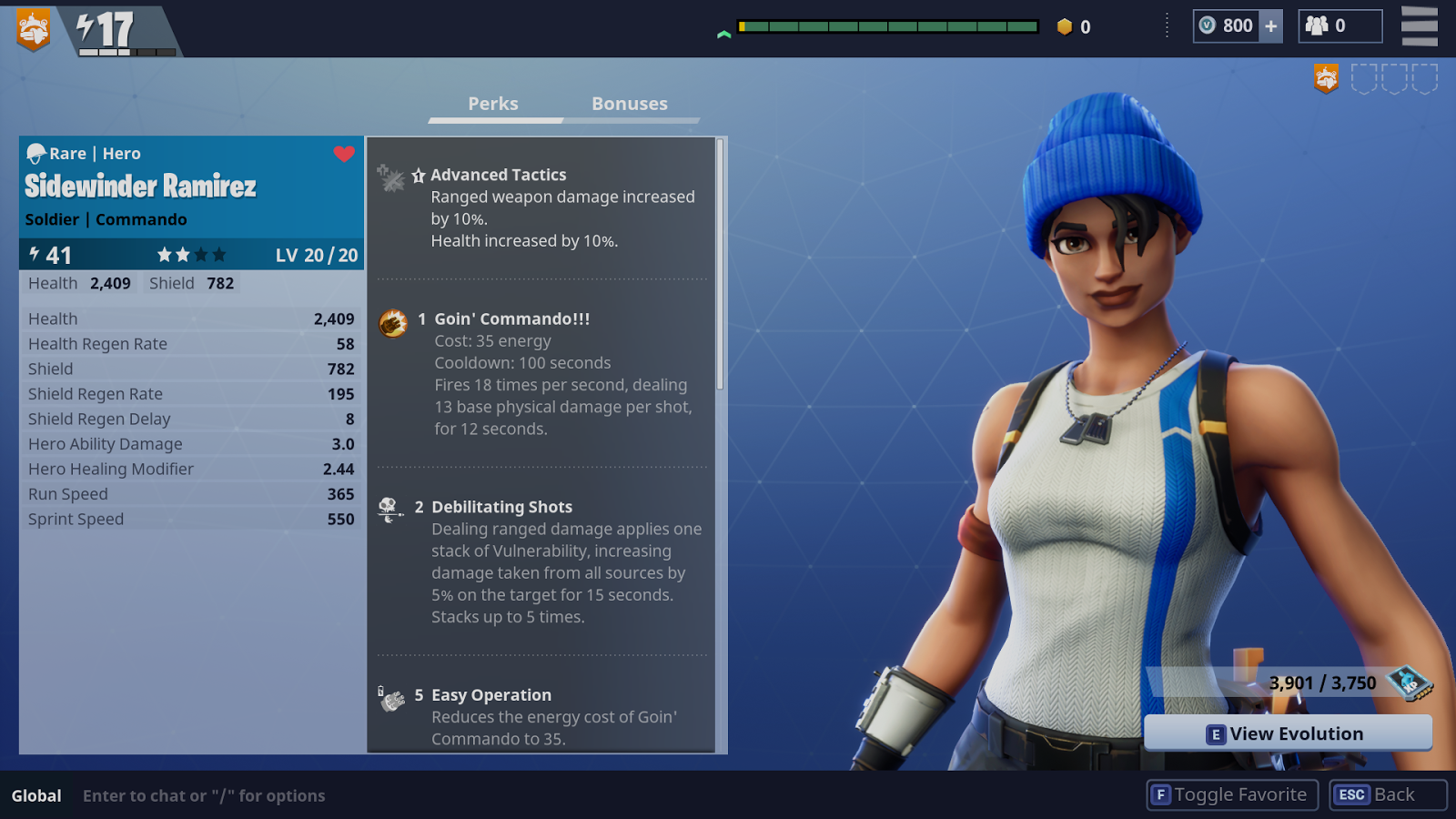 Loot, aka new Heroes and Weapons

There are two real types of these
pinatas that can acquired. The first are random in nature and you hope
for the best. The second change every twenty four hours and offer a
specific type of loot such as Heroes, Upgrades, Survivors, Melee
Weapons, Range Weapons, so on and so forth. This is really how you’re
going to be spending your in-game currency though if you want them
faster or REALLY want that special Llama you can always buy more
currency through micro transactions. That is entirely up to you.

Everything
that can be acquired from Heroes to Weapons all follow the “MMO Rarity”
path that World of Warcraft has essentially put into place. Grey and
green can normally be ignored and broken down for experience while Blue,
Purple and Orange will much more readily hold your attention.
Everything is fair game and sometimes you’ll need to balance your
equipment load-outs as purples and oranges are great to have but
sometimes cost more resources than you have access to. All weapons break
so having backups that can be made with easy to acquire resources is a
smart move as I learnt fairly early on.

From there every player
has an upgrade tree that uses points acquired from leveling up your
account as a Commander and a research tree that is upgraded with points
that are generated on a per hour basis. One requires a lot of playing
and the other requires a lot of waiting. Both are just as important as
they make both your characters and your buildings stronger. 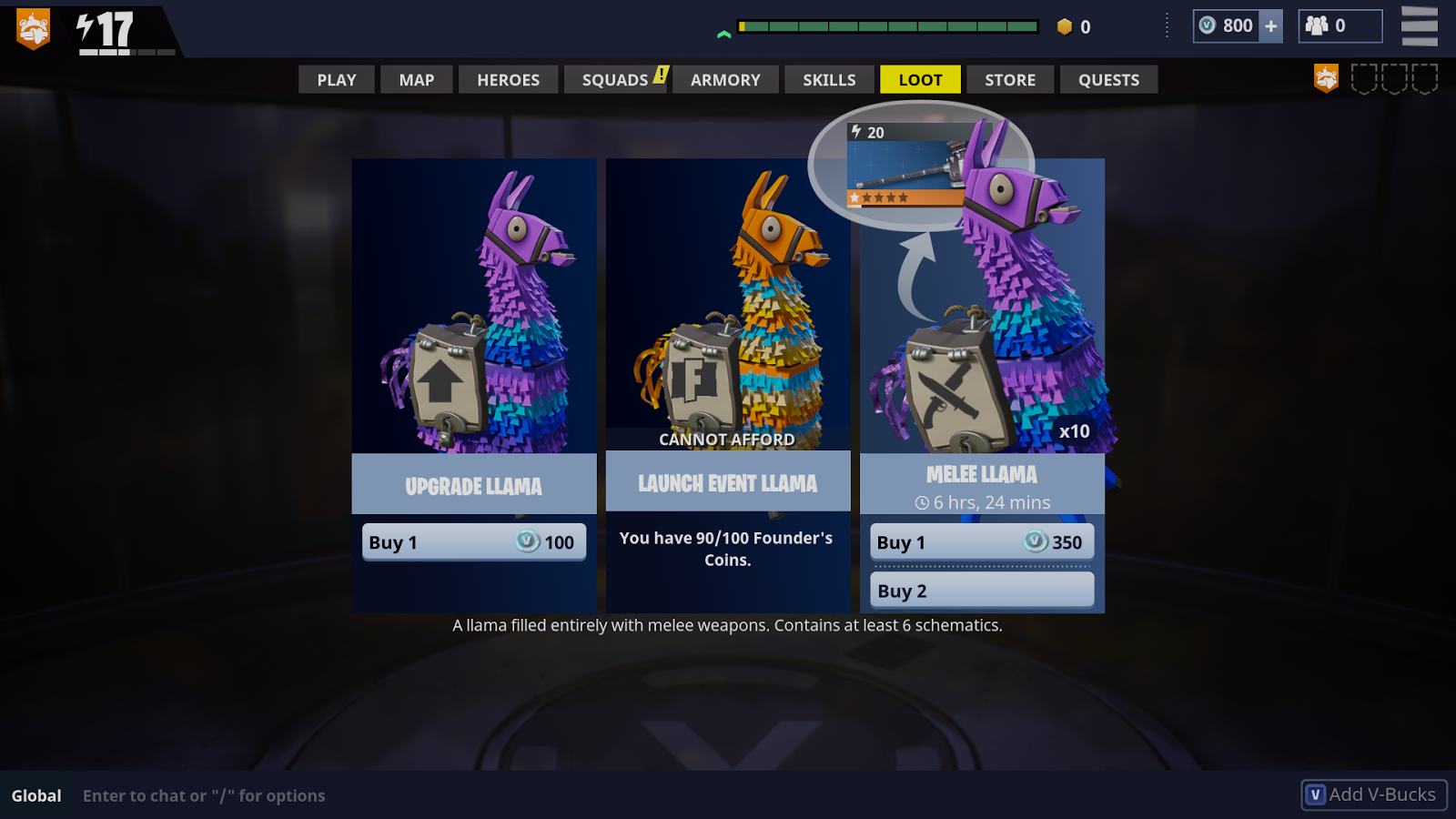 Finally we get to the good part! All of your heroes, their loot, their resources all come down to getting out into the field and fulfilling the reason for being there. Defending a location for a falling satellite, acquiring information from a descending balloon, launching a rocket to expand how far you can move out and putting a crazy rocker’s van back into the sky. All of these are going to require a fair bit of hardware, collected resources and sometimes some creative designing.

Well maybe not so much on that last part as sometimes the best defense is nothing more than four walls of reinforced steel with a ton of traps between the enemies and that wall. Not to mention your sheer amount of ammo and special abilities as you aim for those headshots! There are two main loadouts that you’ll have access to at any given time, beating the crap out of anything that comes close and building mode.

The first is obvious. Set in either first or third person you move around the map and either collect resources with an ever present and upgradable pickax or you shoot your guns or swing your blades to take out the husks. Once the core part of any mission starts this is where things can get fun and intense as often even the best laid plans are not enough for the sheer amount of enemies coming your way.

The second mode is much more interesting and allows for either being plain, boring and functional or allows you to be as fancy as you want with angled staircases, arching entrances, firing hole in the middle or the wall and L-Shaped walls. That’s just the walls and the stairs, that isn’t the floor or the ceiling which can be modified to make wider or thinner passageways that even have their walls in order to protect yourself as you attempt to protect your goal.

Husks for the most part will rush towards these structures but as Fortnite moves on it continuously adds more mobs that don’t just hit your walls but lob projectiles towards it or simply over your protective barriers making roofs a thing that you’ll need to figure out and soon. With all of these however Fortnite isn’t without its issues in which one of the major one is that as easy as it is to edit a wall, a staircase or a floor / ceiling, removing them requires you taking a pickaxe to it. After you’ve leveled up a bit and added in more and more durability and upgraded the walls themselves, having to take your pickax to it is a huge pain in the ass especially if you’ve got some major renovations to perform.

Other than the other above mentioned connection issues however Fortnite is rather stable short of the occasional re-balancing and people’s forts being refunded on resources because Epic had something to fix in that zone. They are quite nice about it though and do apologize for not being able to refund the time spent as well as the resources.

Fortnite requires a lot of time to really get going and truly understand how each piece works in conjunction with one another but it’s worth it. It’ll take take some time to figure out which heroes you want to play with, which types of weapons you are comfortable with and how to best go about acquiring resources in the field while still getting ready to repel the husks. That said? It’s extremely addictive and only becomes more challenging as time goes on which keeps things interesting for hours on end. 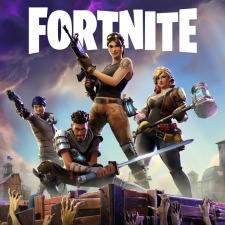 Article by Pierre-Yves
Lots of time dedicated to playing coop by Marc L.