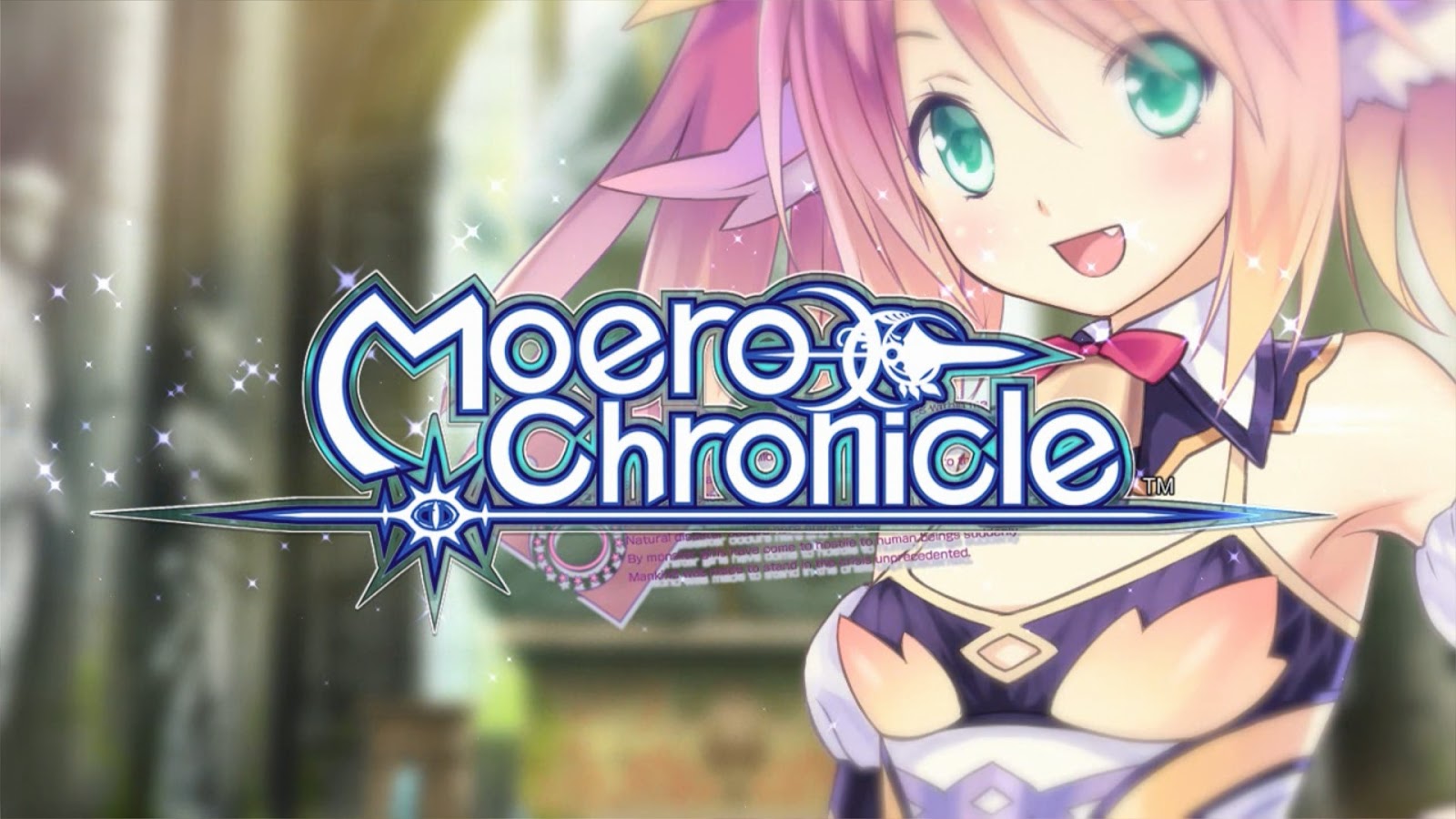 Moero Chronicle is one of the latest JRPG Dungeon Crawlers making its way over to the PC from the Vita. Cast as a Io, described as a man with no luck with the ladies, it falls to him to save the world by curing the Monster Girls of whatever came over them. Made by Compile Hearts and published by Idea Factory you already know where this could be going but surprisingly? Moero Chronicles is a lot more tame that it’s description sounds while being a fairly good Dungeon Crawler.

If you read the description of Moero Chronicles and read what Io is supposed to do in order to cure the Monster Girls, you may all depending on your sensibilities turn the other way. In order to cure the Monster Girls Io and his childhood friend Lillia, who’s the one protecting him because he’s absolutely useless and can’t fight, are to travel the world and save it. Why is a man that useless the one to be sent out to save the world you ask? His parents kicked him out and made a deal with the mayor that he would be the latest to attempt to solve the world’s issues.

So booted out from his hometown, Io and Lillia head out to go further than they’ve ever gone before. Past the first dungeon. By attempting to do so, because Io really has no other choice having been cast out, they walk into the dungeon and are immediately told to get the hell out. Saved by a sauve talking pink seal, I didn’t bother asking any questions, he tells you that in order to save the Monster Girls who now hate Humans that Io will need to touch, rub, poke or pick at the girl’s sensitive spots in order to bring them back to their senses. To do this they need to be stripped down first to give Io the chance to do the former. Sound pretty bad? I thought so too but after playing Criminal Girls and Criminal Girls 2, Io’s adventure is a lot more tame. 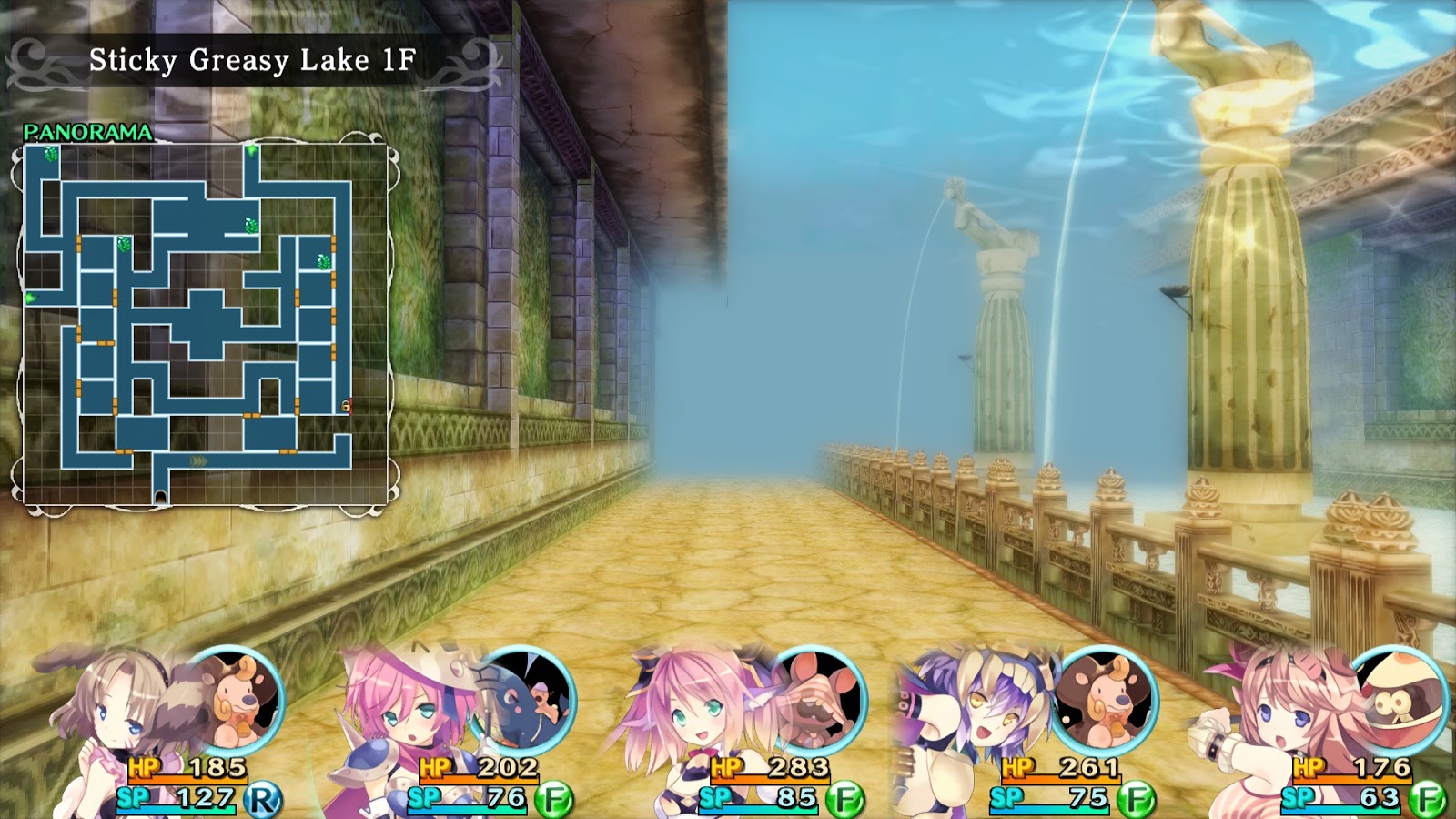 Moero Chronicles is a first person Dungeon Crawler in which Io’s party will be displayed at the bottom and the enemies will be displayed in the center of the screen. Basically it fits in nicely with the rest of the Wizardry styled Dungeon Crawlers. Each dungeon map will increase in both enemy difficulty and add in more twists and turns as the dungeons progress. This creates the advancement challenge and sometimes the need to grind for experience in order to level up your Monster Girl party. In order to acquire more Monster Girls to even make it that far you’ll have to find them in the Dungeon First and then meet them on the field of battle.

Monster Girls are pretty much both Mid-Bosses and Dungeon Bosses. Varying in difficulty some of them hit hard so being prepared is sometimes knowing when not to face them if you’re party is running low on healing items or magic. The Mid-Boss variants can be seen roaming the map in a pattern so if you feel that your party is ready then striking then and there may be the best bet.

Battling Monster Girls and battling normal enemies differ only in that Monster Girls on top of their Hit Points also have weak points on their outfits. Hitting and destroying these weak points will allow Io with the help of Otton (suave pink seal) to perform the above mentioned actions. Now. If you’ve managed to get this far yeah it sounds bad, however, the poking and the prodding is all done to a static image that’s only response is to tell you if you’ve hit a sensitive spot or not with stars or hearts. If Io can get the gauge to 100% then the Monster Girl comes back to her senses and can be added into the party. That’s it. Sounds so much worse than it really is. Honestly the graphics from defeating a boss in Dungeon Travelers 2 and the actions done in Criminal Girls are much worse than the scenes depicted here. Still, this won’t be for everyone. 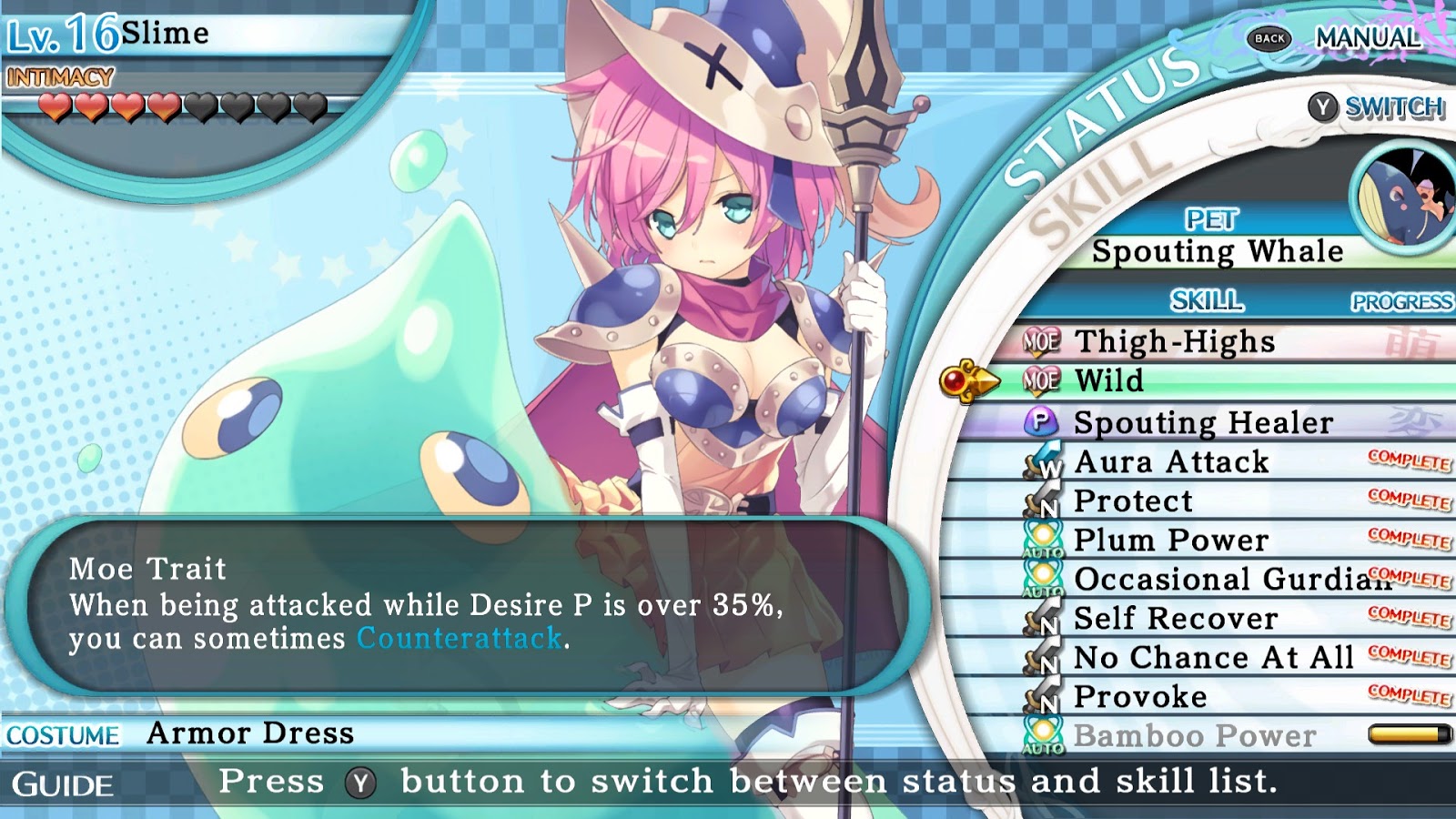 What impressed me about combat is that it wasn’t simply attack -> attack -> defend -> heal -> attack. While this does comprise of a good portion of it, Io is actually good for something and isn’t just in the background watching the girls fight. Instead, by “channeling his desires” he is able to boost the girl’s combat abilities. This can be done in one of two ways. The first is that Io will store up desire himself or have one of the girls do this in order to enhance the power of one of the party member’s next attacks. The second is to pass a certain percentage such as 45 or 70% and then remain idle as it could raise everyone’s prowess. Will it do as much immediate damage? No. over time? Very much so.

The last noteworthy system ties into the title. Each Monster Girl has a particular Moe to her and these Moe’s can be mixed and matched in order to create your dream team. So Wild for example will allow the possibility of a counter-attack when Io’s desire is over 35% while Tsundere will reduce the party’s incoming damage by 35% is her own Hit Points fall below 60%. There are a huge amount of combinations to be pulled off from being clumsy or wearing thigh-highs over to each’s respective bust size. As the party increases in size the amount of reading and cross-checking who’s compatible with who for the best results could take time or you can simply take your favorites and hope for the best!

While not as noteworthy as the above, the last of the systems is an interesting one and it adds an unseen depth to combat. Small fried enemies that you’ll be fighting on the way over to the Mid-Bosses and the Dungeon Bosses can join up with you and be assigned to a Monster Girl as a “Pet”. Some of these don’t do a whole hell of a lot but others can add in an extra attack, possibly slow down the enemy or heal the character that they are attached to after a successful attack. A lot of these are probabilities and if you have combat on auto/fast forward you really may not see them but it’s an extra feather in your cap and anything that stacks the odds in your favor is generally a good thing. 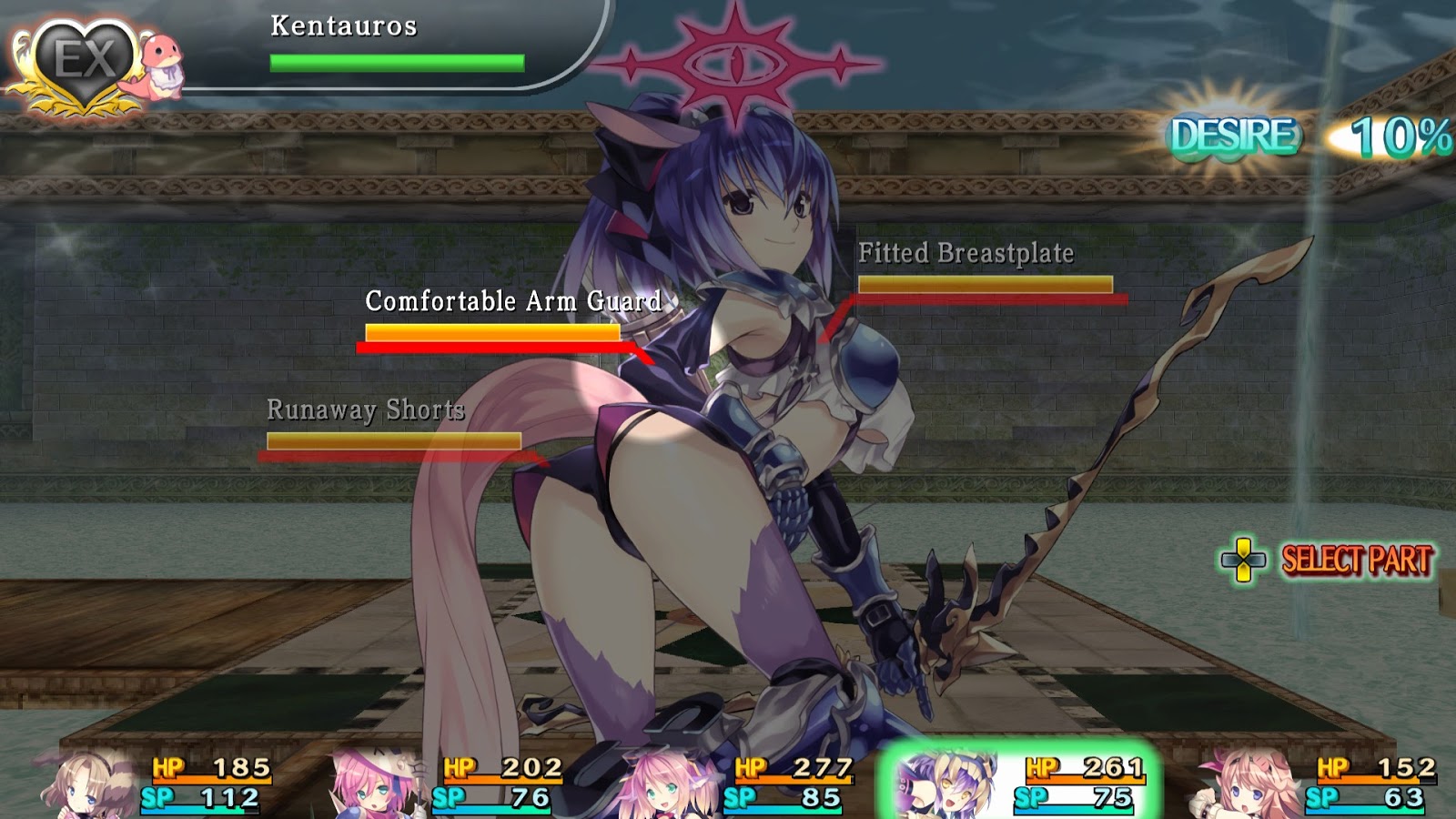 About a good ninety percent of your time will be spent out in the dungeons but the other ten percent will be back in town essentially on housekeeping. Literally. Now just because you can’t go home doesn’t mean that you can’t go and stay at the Inn with all of the Monster Girls that you’ve saved so far. It’s a very big Inn as each Monster Girl, Mid-Boss or Dungeon Boss, has their own room. In order to get closer to them, almost in the form of a dating sim, Io will need to have conversations and present gifts in order for any one of them to warm up to him. What’s the benefit? As a Monster Girl warms up to Io her outfit can be changed allowing for a diversity in her combat stats.

Each Monster Girl has a specialty. Combat, Magic, Support and these specialties can be played with by changing their outfits which also changes some of their combat abilities which I hadn’t noticed the first time. Changing a very powerful mage’s outfit to one that even further enhanced her magic lead to loosing the ability to cast the spell that I thought was being buffed in the first place. As changing can only be done in town, as let’s be honest no one should have to strip down in a dungeon, making sure of your choices and what those choices affect is a good thing. It’s not that “town” is far, it’s that it amounts to more of an inconvenience than anything else.

As much as Io would probably want to take everyone along to simply breeze through the dungeons, only five Monster Girls can make the cut to the party. Everyone else is required to stay back at the Inn in town. In order to make sure that each of your potential party members’ potential doesn’t go to waste, each of their rooms can be upgraded allowing them to acquire experience while Io is out and about with his party. It costs a fair amount of resources but if it means an easier time swapping out members that are equivalent enough in levels? It’s worth doing and a great feature to have even if it’ll take time to get done. 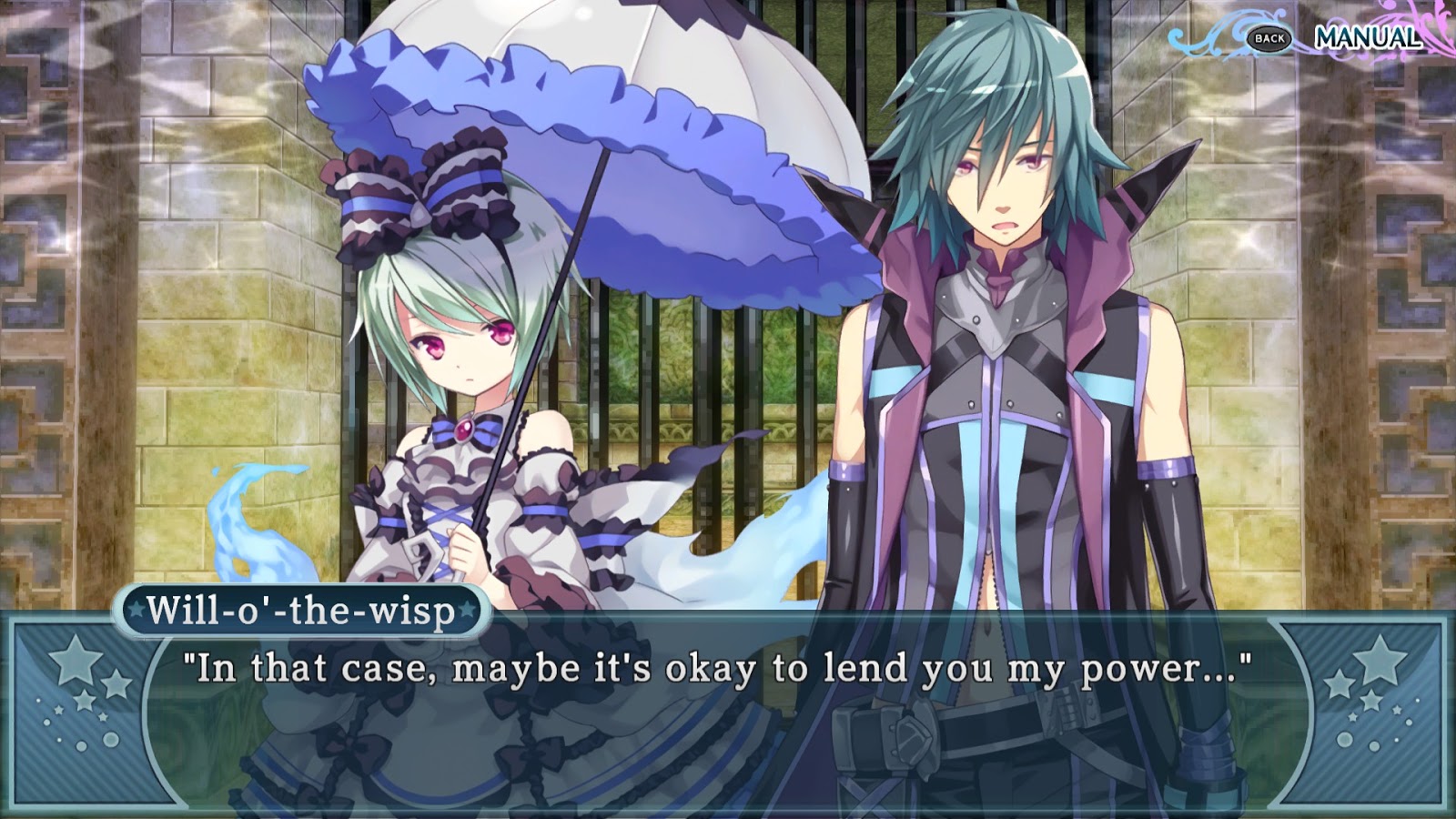 If you can get past the ideas that Moero Chronicles is made of there’s an incredible Dungeon Crawler underneath. Yes there’s loads of suggestive dialog, and the poking and prodding, but when compared to the likes of Criminal Girls and Dungeon Travelers it’s rather tame and honestly much less focused on than exploring the dungeons on the way to save the world.