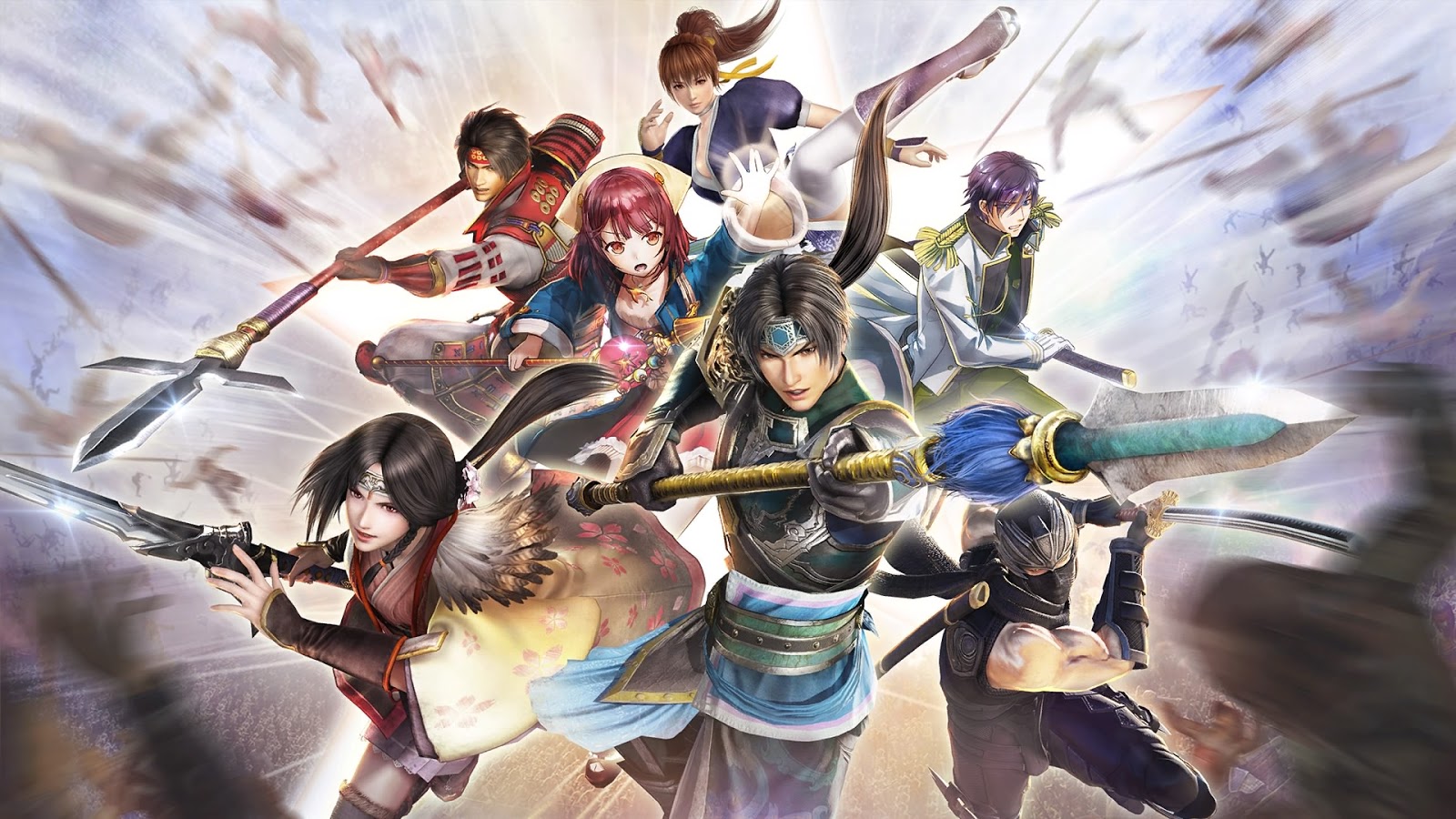 Warriors All-Stars is Omega Force’s latest creation and possible the successor to the Warriors Orochi series which saw a mash up of the Dynasty and Samurai series as well as other characters from Atelier, Ninja Gaiden and Soul Calibur. Transported to another world in order to help save it, join in on a brand new adventure with elements and characters from across the various IPs that Koei Tecmo’s has access to.

Let’s get one thing straight right off the bat. Running around the field at a feline version of the terrifying Nobunaga is freaking amazing. This is just one of the characters available for use however this one character alone, before even getting into all the others, shows how much work was put in because of how different this feline version is to his human self. Deep rich voice? Check. Epic clothing style? Check. Fighting style? Not what you would expect.

Nobunyga (because cats in Japan clearly speak with “nya”) doesn’t use a sword. Instead he starts off with claw attacks before pulling out a rifle and summoning other feline soldiers in the form of both riflemen and spearmen for more damage. If this seems odd it is possible that you’ve never played a Samurai Warriors or looked into Japanese history as it makes quite a lot of sense as to why they developed the character this way. It was quite appropriate and Nobunyga is not the only one. While Arnice from Nights of Azure fights with her sword and Sophie from the Atelier series uses her staff, Plachta, who adventures with Sophie uses alchemic arms which float beside her and have some pretty amazing moves. 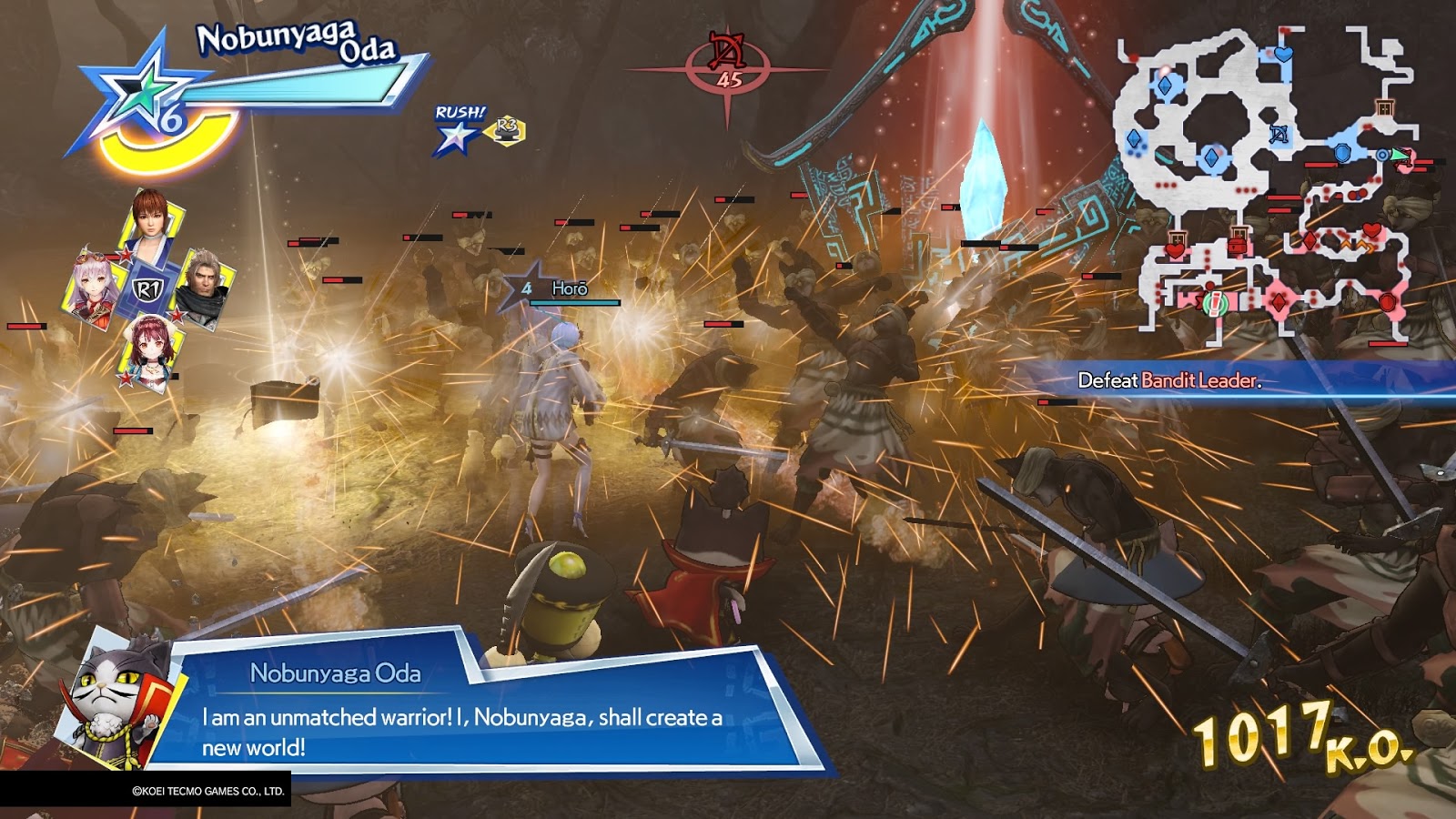 There’s a fairly hefty cast thrown into the mix and you’ll get the chance to use them all over time. Depending on your starting character you’ll be joining one of three factions in a form of a civil war for the throne of this world. Nothing is quite as it seems as the three fighting over it are cousins and siblings and none of them actually hate each other. Why are they fighting then? You’ll have to explore the map and find out because I’m not spoiling the reason!

The story however progresses on your time. Being given a map of this world you’ll get to pick and choose from a variety of mission styles that can occur. These missions will give a recommended character level but if you’re careful enough even the higher ones can be pushed through with a bit of effort in order to gain money, cards that characters can equip and experience. There are a good variety of mission styles and some are less focused on the reward and more focused on the objective such as defeating a monster horde, defeating xth amount of specific enemies without getting hit once as Sudden Death (One hit kills) rules are in place. They’ll all lead to gaining these resources though some lead to them faster than others.

When you’ve picked your mission and are ready to go the fun begins. Combat as a core will be most familiar to that of the Dynasty Warriors series short of having access to a horse. Square is your basic attack and Triangle is your strong attack. Between the two plenty of combinations can be pulled together for some rather crazy moves but from this point All-Stars puts in some other elements to stick out from the rest. Instead of being one or two characters that can be swapped between or Orochi’s threesom that follow closely together, All-Stars lets you have a total of five on the field. 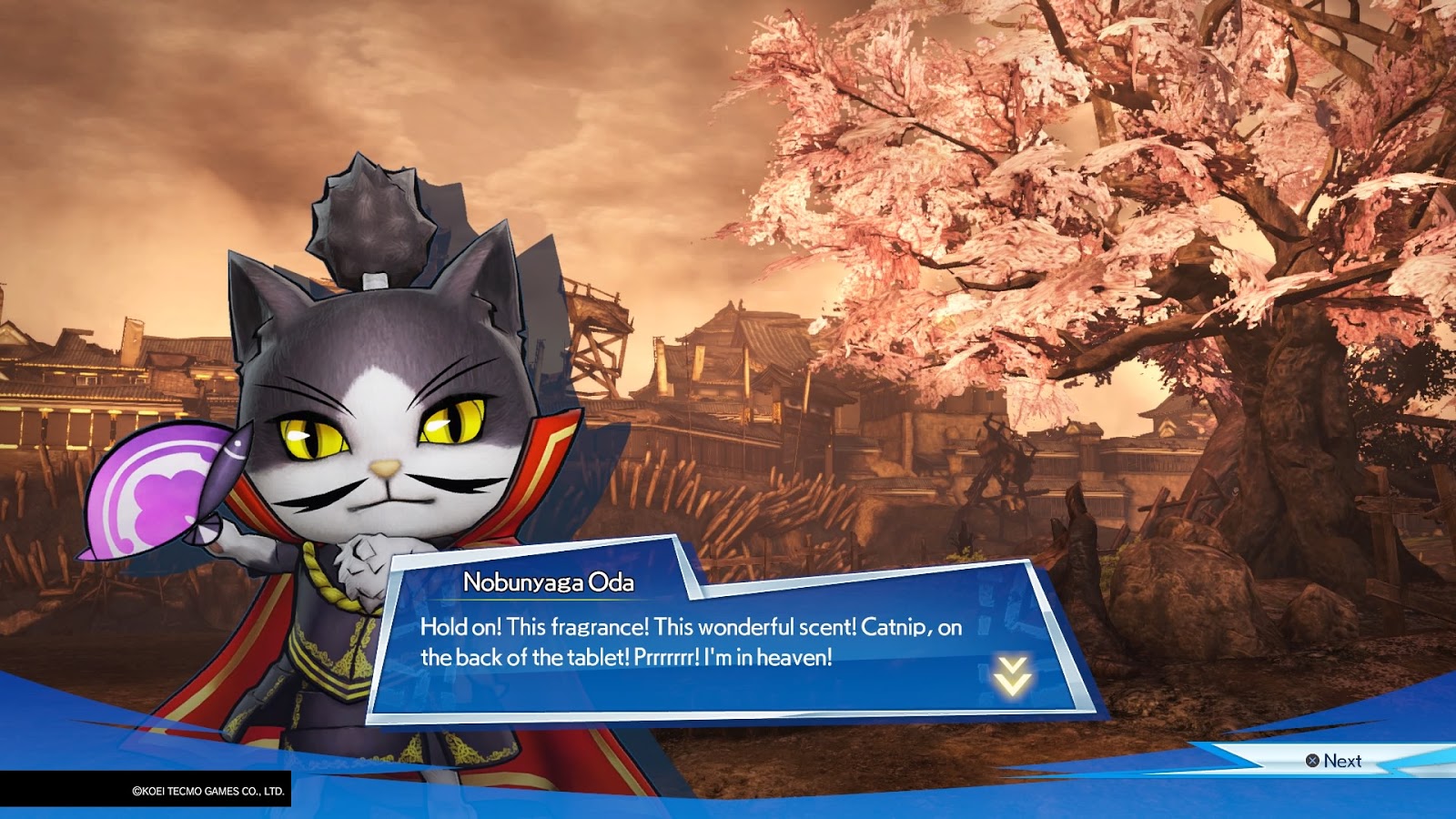 Unlike what I’m considering its predecessor, you cannot switch between the five characters that you pick for the field. Of these five, one is the party leader and the rest are along for the ride. Now this doesn’t mean that you can’t use them, it just means that you can’t use them whenever you want by switching between them on the fly. Having a larger party is never a bad idea as not only can they help out but they can also be triggerd for movesets after certain combinations. Square X3 with Triangle X1 and then Square again will bring in the rest of the party for a glowly show of power. Remembering to do this and not simply going back through your next set of combinations takes some time but is entirely worth it.

On the side of your screen you’ll have gauges with each of your party member’s portraits. Once that portrait is filled up a special attack can be triggered. Some characters can even be triggered for a special attack at the same time for an even flashier move. That’s one way of using them. The other way will let you know if that character is a good play style for you as if you simply hit the D-Pad in their direction then they join immediate control and you move around as them instead of as your party member. With a total of five members there’s a lot of mixing and matching which lets you decide if you really want to use another as your primary or if they work out just fine as part of your party.

For team attacks there is one more left in the form of a Rush Mode. This mode allows for time to essentially slow down and using a bit of the instant death rules the goal is to kill as many enemies as possible that are in your vacinity before it runs out. The higher the kill count the higher the rewards (gold, exp, cards, materials). I however used it more as “oh hey! They look strong, Rush Mode”. Since it slows down the time as long as you keep killing the specifically spawned enemies you’ll get extensions to the time you can rush for and the enemy can’t do much about it. It’s quite effective especially for powerhouses such as Naotora Ii who’s unfairly invincible during one of her moves or if they trigger their own Musou attacks they can’t be harmed. It doesn’t break the system. 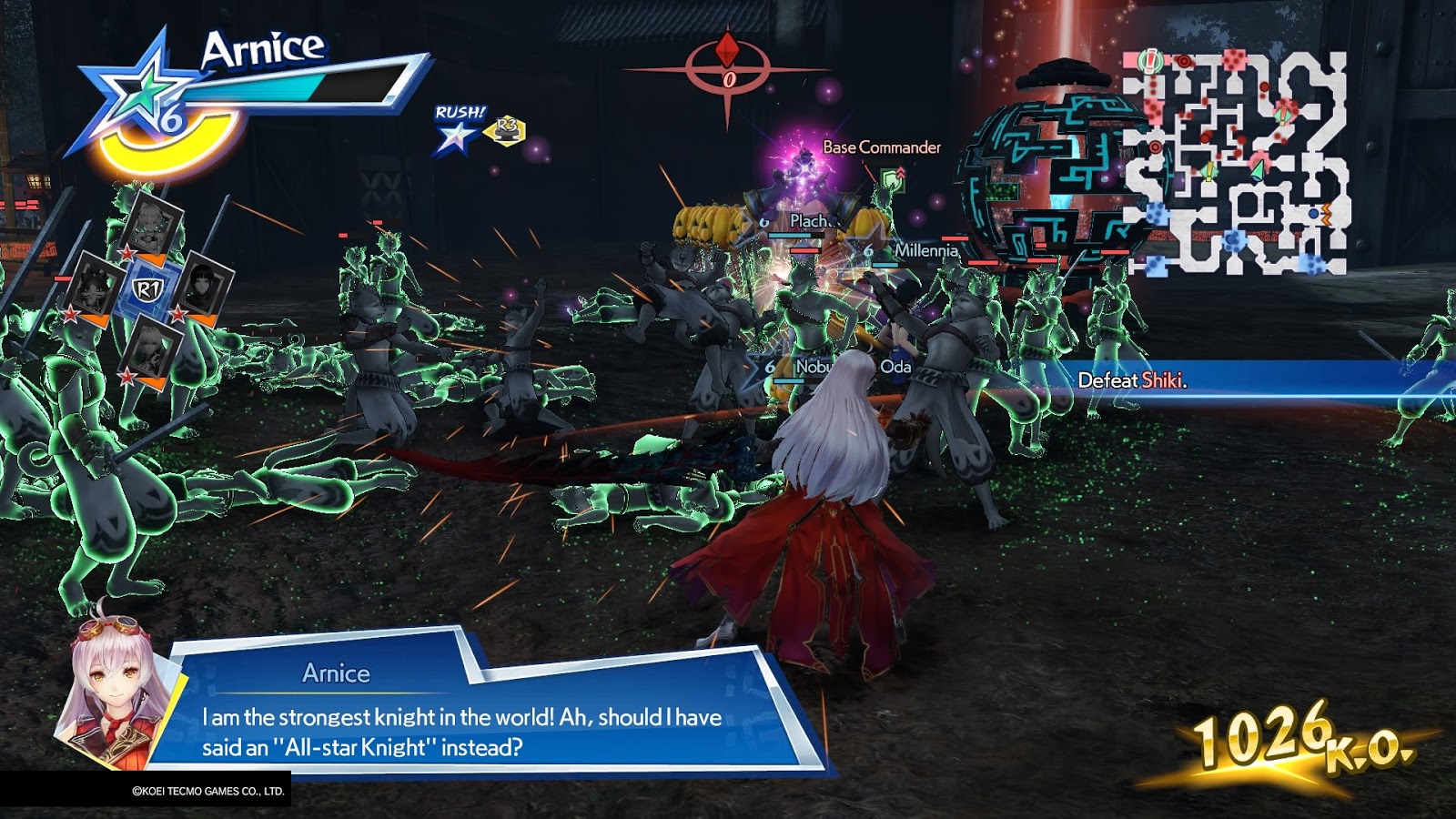 As you progress the story and pull off missions, characters will start to gain respect for one another. As in real life, the amount of respect can change depending on if they were used more by the method above or if they were just there along for the ride (aka chilled in the back). To make things go even faster quests can be picked up from the provided hub in order to further the amount of respect between the various people. The only thing to keep in mind with this is who is “handing in the quest” as if you hand one in with someone already maxed out, you wasted it.

Doing these quests as well as fighting out in the field will offer character cards that can be equipped. There’s no equipment in All-Stars having instead gone for a deck of cards with various ranks that increase attack, add elemental damage and can be upgraded with abilities such as being able to defend from back attacks even if you’re looking foward. Putting upgrades requires materials that can also be found in the field or can be obtained by breaking down the cards that you have. In either case, equipped cards work a lot like weapons in Nioh where the more familiar you are with it, the more powerful it will be.

Finally the last addition to All-Stars is the most important because in a way it removes being “overpowered” and “overgeared” in favour of being braver than your enemies. Your party, your allies and your enemies all have a certain bravery score that determines how powerful they are on the field. This value resets every mission and prevents you from simply running to the end goal as Bravery Lvl 1 will never (someone will do it at some point kind of never) take on an enemy of Bravery Lvl 6-7-8-9 and win. They are just too powerful. 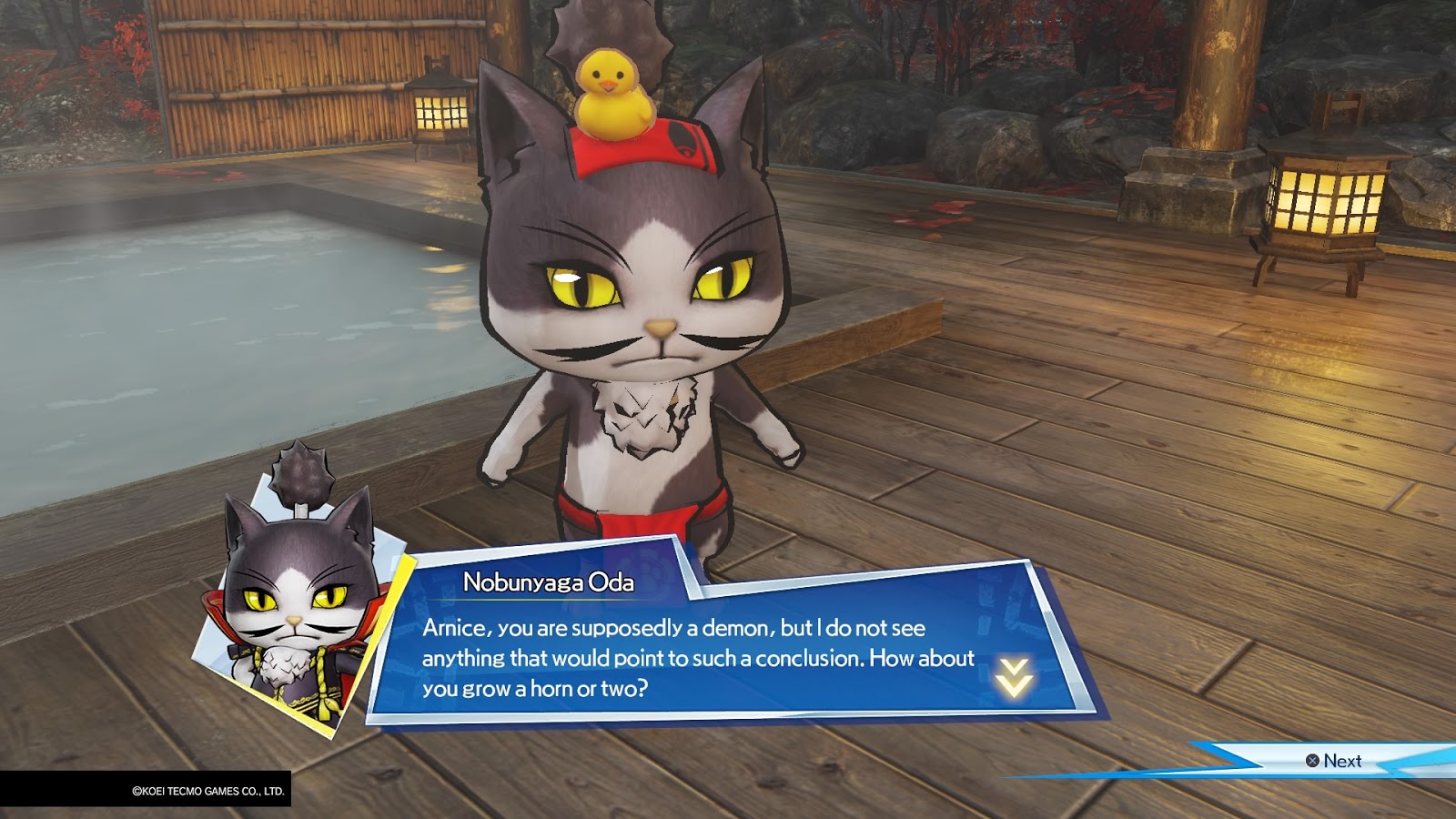 This system instead creates a decent pacing for the stages but is also generally fair. Starting off the highest bravery level around you will generally be three allowing you to climb that scale at a decent pace. With musou attacks, combination attacks from your allies and the rush mode it is possible to take on the higher enemies as often the final goal such as the leader will be a Bravery Lvl 9. It’ll just suck for him as often by that point you should have maxed out your own to level ten.

Before finishing this off I want to note some of the little details that simply add up and improve the overall experience. Stages are a combination of new and familiar locations such as the starting dungeon tower from Nioh or some of the Samurai Warriors inspired castles from Japanese history. Along for the ride are also the enemies which will be familiar to some and new to others. Puni (Atelier), Oni (from Toukiden specifically), Yoki (Nioh – Those bigger Oni that are a pain in the backside as they are super tough until you learn to take out their horns), toy soldiers (Nights of Azure) and more that I may not have recognized specially. These seemingly small things make for a more inclusive experience that relate to all the characters involved in some manner either big or small.

Between all the new adventures with Arslan, Berserk, Dragon Quest Heroes (I-II) and the newest entries in the main line of Samurai and Dynasty, Warriors All-Stars is a fresh new experience because it has nothing that it needs to follow. All these characters from a variety of different universes are free to be portrayed as their character morals would allow them in a new world with plenty of people that they never would have met otherwise meaning you never really know what’s going to happen next!