comments Share
You are reading
Bear With Me – PC Review 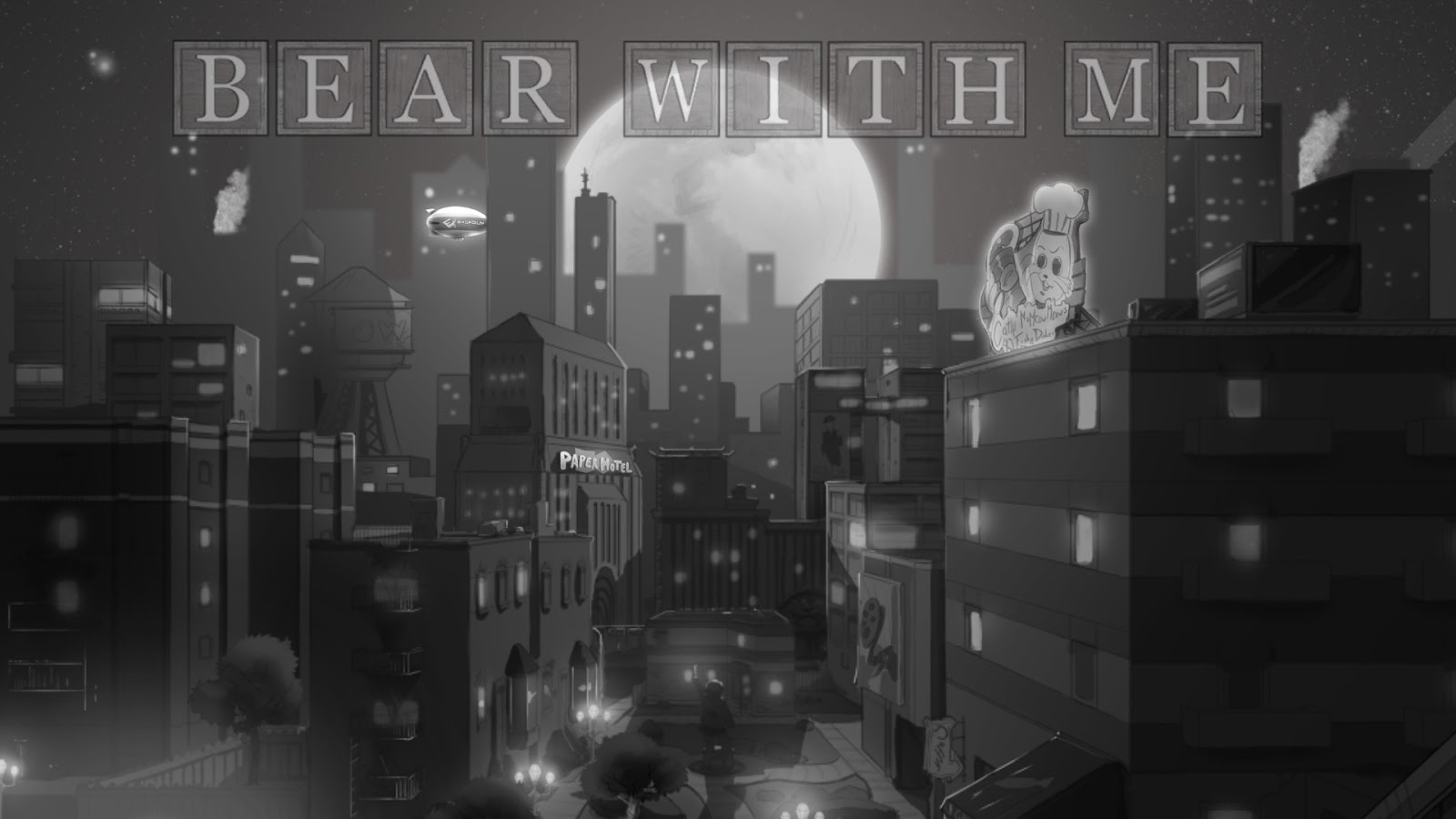 Bear With Me from Exordium Games has just seen the launch of its third and final chapter. Taking a look at the entire series, the one clear fact in this 1950’s Noir-esque adventure is that the presentation and the writing are superb making it hard to remember at times that it’s all about a ten year old girl and her teddy bear looking for her brother that went missing and filling the rest with imagination.

The adventure starts off with Amber getting a visit from an older “toy” named Millie as she wakes her up in the middle of the night. Basically browbeaten into going and getting help from her old partner and private eye Ted E. Bear, the two start to explore Amber’s house looking for clues regarding the disappearance of her brother.

This from the very beginning starts off on a high note. Because of the dialog alone, it’s hard to remember that Amber is nothing more than a ten year old who’s looking around the house with her bear. Even Ted’s dialog is that of the classic retired and hung up his hat PI that’s come back for “one” more case in that he himself mentions could get him shot and killed as it happens so often. Bear With Me is quite self-aware and integrates the modern elements almost seamlessly with the 1950’s style that it is trying to emulate while occasionally breaking the fourth wall to talk to the director. With imaginations aflair, Amber’s house becomes something more than it truly is as the two start to explore the “crime scenes” and ways in order to progress past the obstacles that lay in their way. 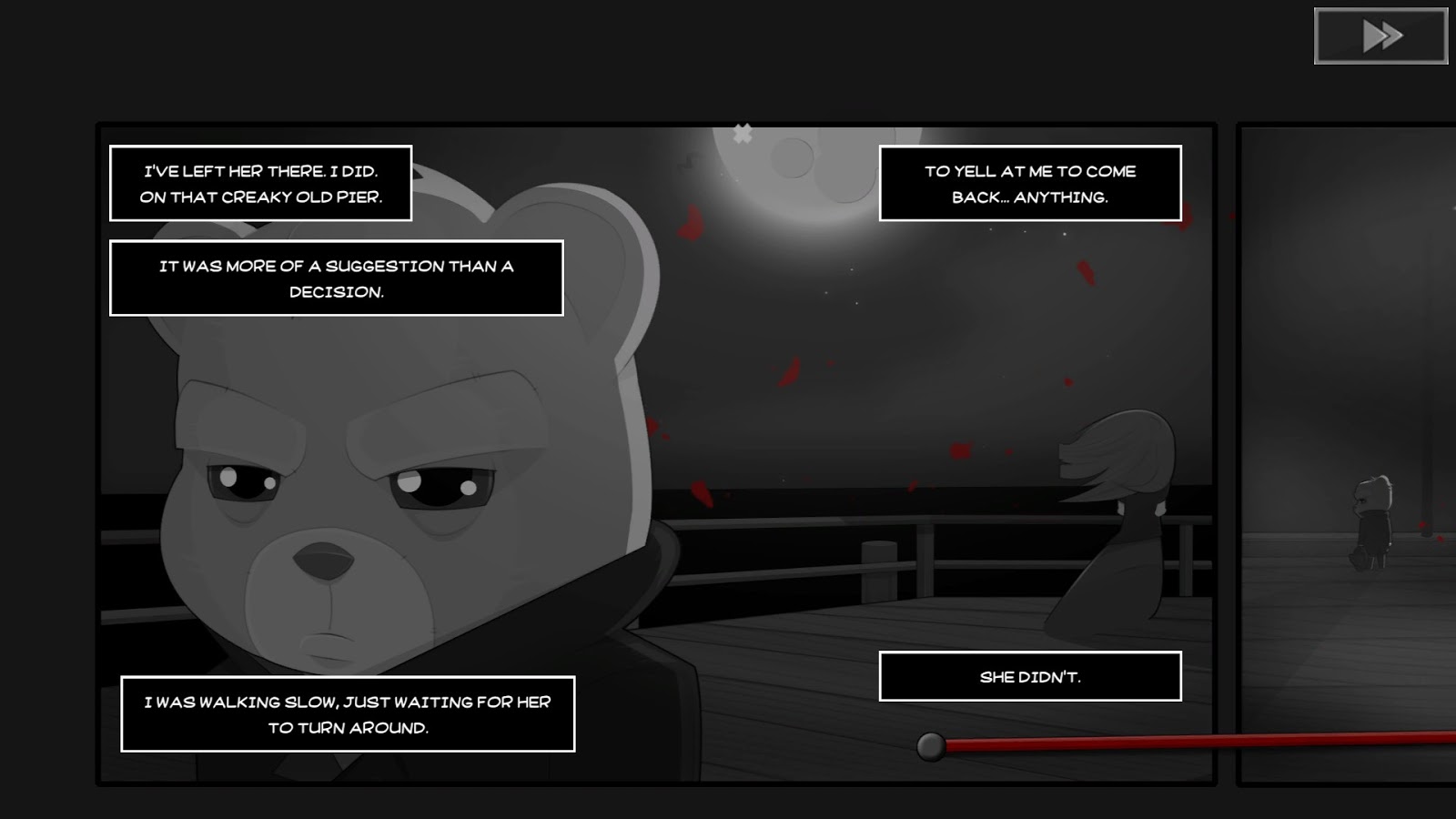 Once the first chapter is cleared and it’s time to move on, you’ll have to exit the game, reload, and choose chapter 2. There’s no carry over so if you played the first chapter on another system or formatted there’s no worry about losing anything in particular. While just as brilliantly written as the first chapter, it took some time for me to get invested into the second as unlike the first which had imagination roaming and running wild inside of the confines of the house, the second takes place in the often mentioned Paper City which is access from the attic at the end of the first. That sense of adventure that brought me back to my childhood was gone as the city’s layout could in no way fit within the space that they left. It’s not that it isn’t as good, it’s that the style that was so well defined in the first was gone.

Chapter 3, like chapter 2, starts up right where things left off and still within Paper City keeping things constant. Not to be outdone by the previous two chapters however things get spiced up a bit with our protagonists having split up and doing things independently of one another. Both still keep to the same styles and gameplay but the change in direction after the first two was actually welcomed as it offers a different outlook on the unfolding events for a great ending to the series.

Like all Point and Click’s, Bear With Me is both heavy on the dialog and heavy on the puzzle solving. Neither of these is a bad thing. With how well written and voice acted it is listening to the banter of each chapter is a joy especially when you get into the smaller modern references of Iron Man or classics like Shaft. Because of the voice acting and the nature of the dialog, you tend to forget about Amber’s age or that Ted is really a stuffed bear because of how mature both of them sound while talking like they’ve been at this for thirty years. It is very, very, well done and the chemistry of the characters is just perfect for both the good and the bad times. 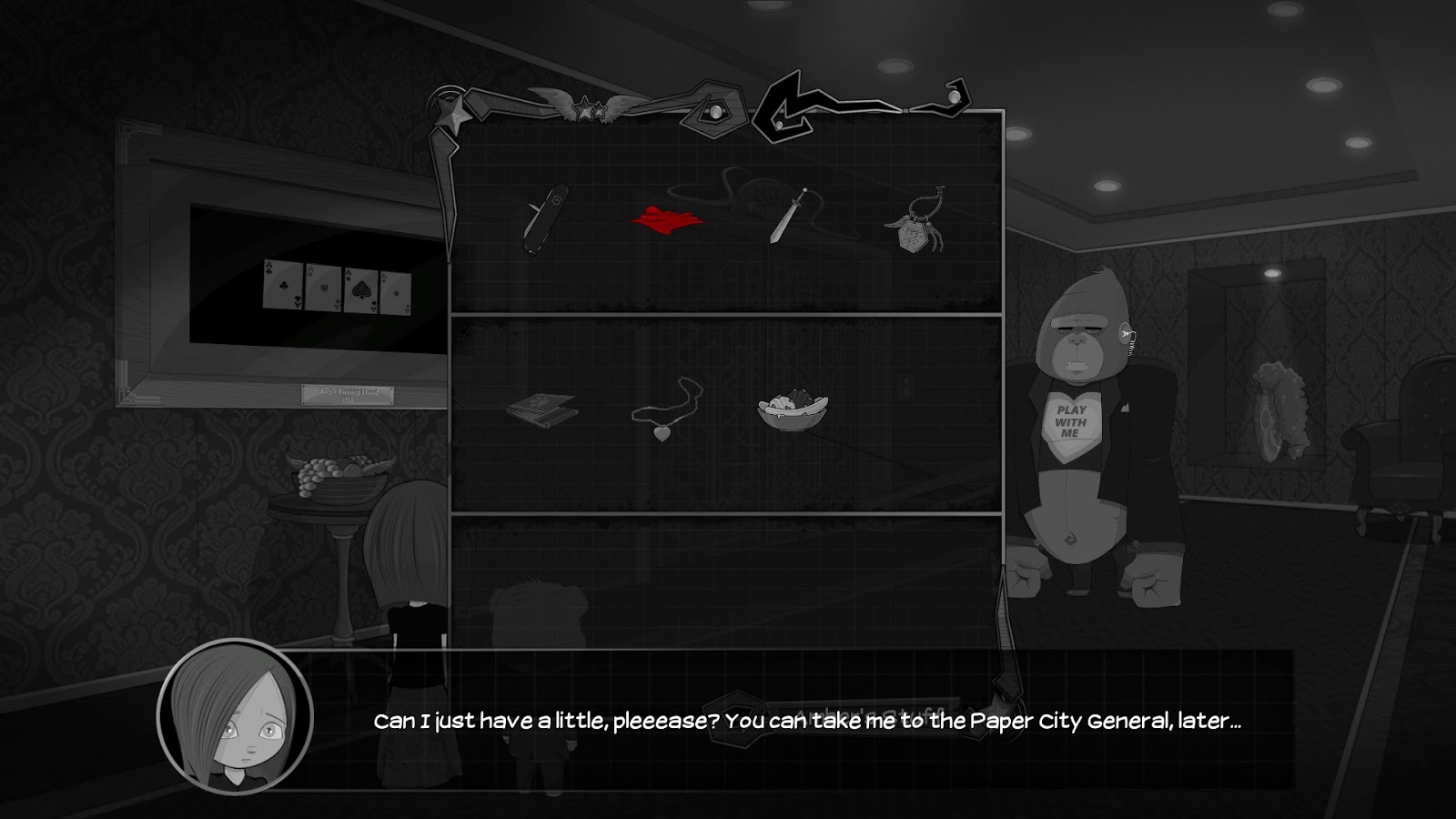 The puzzle solving isn’t “hard” per say but sometimes you really have to think about what you have versus what can be picked up out of the environment. Without any spoilers I’ll just say that REMEMBER YOU HAVE A SWISS ARMY KNIFE. The only thing that I would say was missing however, and this may be because other titles have spoiled me, was an option to have a key in order to highlight any and all interactive elements in the environment. I missed many things the first, second and so on until passing my cursor slowly from top left to bottom right in order to see if anything could be picked up. Moving too fast you can miss things so it would have been nice to have that one little extra feature.

Bear With Me is definitely a must play. With stellar dialog and voice acting only ever supported by the grayscaled visuals with red as a highlight, it’s one interesting ride as imagination takes over from the real world to give Amber the same style of adventure that so many of us had when we were younger.

Source:
All three episodes were provided by the publisher