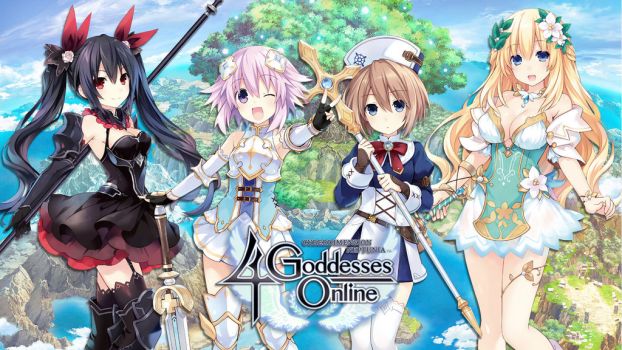 Not a Mega Victory, But It’ll Quench Your Thirst For More Nepbull

When I sit on the embroidered cushion of my imaginary throne to contemplate a series of games that has made the most profound improvements from inception to sequels, the Neptunia franchise is the third or fifth to bop into my brain. While the first game in the main series, 2011’s Hyperdimension Neptunia, established the lighthearted magnetism of its allegorical satire with lovable, comedic characters and narrative, as well as the fitting and unapologetic fan service, it also contained gameplay that I’ve heard fervid Nep-Nep junkies describe as “nightmarish, but definitely worth the struggle.” To some, HN was a charming shit-show, with a brain-fatiguing battle system that could be partially suppressed from the consciousness thanks to the glistening allure of its characters and writing.

Somehow, probably due to Divine Nep-ervention, the Neptunia series has managed to substantially upgrade its battle system from “nightmarish” to nearly “Nep-sational” over the years, and adapt its writing to the ever-changing climate of gaming culture. Hell, the battle system in the second game, Hyperdimension Neptunia Mk. 2, is so much more enjoyable than the first that if I were to play them back-to-back right now, I’d front flip into an alternate timeline where the number one requirement for being an effective President, writer or jet pilot is a love, i.e. obsession, for pudding (if you didn’t know, Neptune adores her pudding). 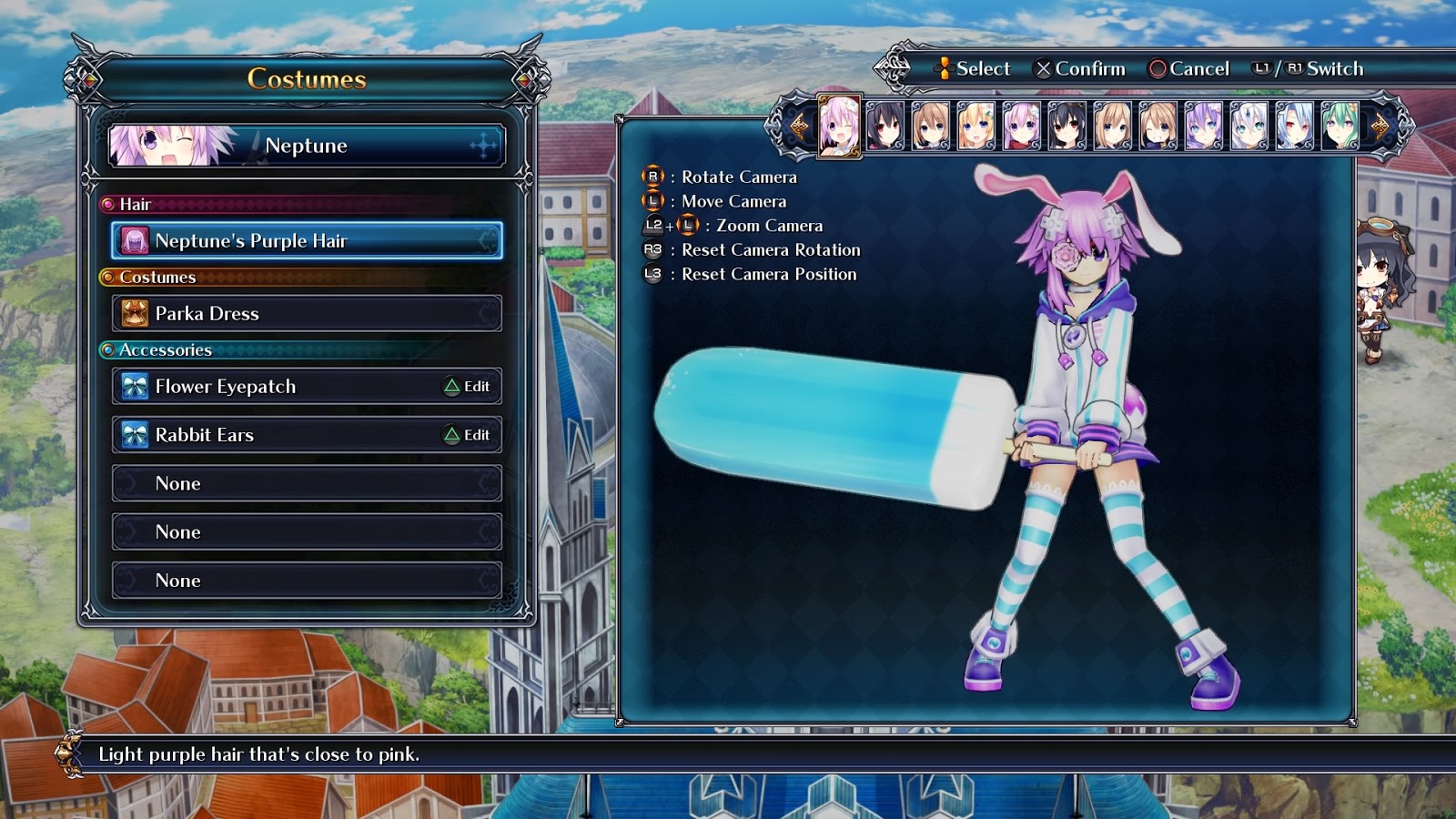 It’s the main series’ ability to sequentially make significant improvements to its mechanics that has me hopeful and excited for the future of Cyberdimension Neptunia: 4 Goddesses Online, the series’ first spinoff to come to PS4, and the first project in the series to employ the visual provocations of the Unreal 4 engine. Even though the writing and characters are more alluring and hilarious than they’ve ever been, 4GO’s real-time combat, while functional and fun in the right mindset, is Jonesing for a very heavy hit of “Nep-sational” refinement.

4GO has a tale as old as the MMORPG: The girls of Gamindustri, who never turn down an excuse to expand their leisure time, receive early access invitations to participate in the newest beta version of 4 Goddesses Online, the most popular virtual MMO across the four nations. What begins as a team effort to beat the game – which has a story that revolves around collecting 4 items to awaken 4 Goddesses so they can save the fictional world of Arsgard from the fictional threat of the Demon King – eventually shifts into a quest to suppress a real hacking attempt on 4GO’s servers.

Whether the narrative is parodying, pastiching, or showing respect to the tropes and culture of MMO’s both real and fake, it has some of the most concise, comical, and well-acted dialogue of the entire series. Where jokes in previous Neptunia games would run to the point of almost fumbling my interest and patience, no joke or conversation in 4GO ever came close to overstaying its welcome. This grants the writing, with its unfiltered references and ever-potent 4th-wall-breaking wisecracks (you’re playing a game within a game universe, after all), a greater sense of therapeutic frivolity. Yet, the writing and voice performances can also be staggeringly emotive when the circumstances require it, even if said circumstances are commonplace by RPG or anime standards. 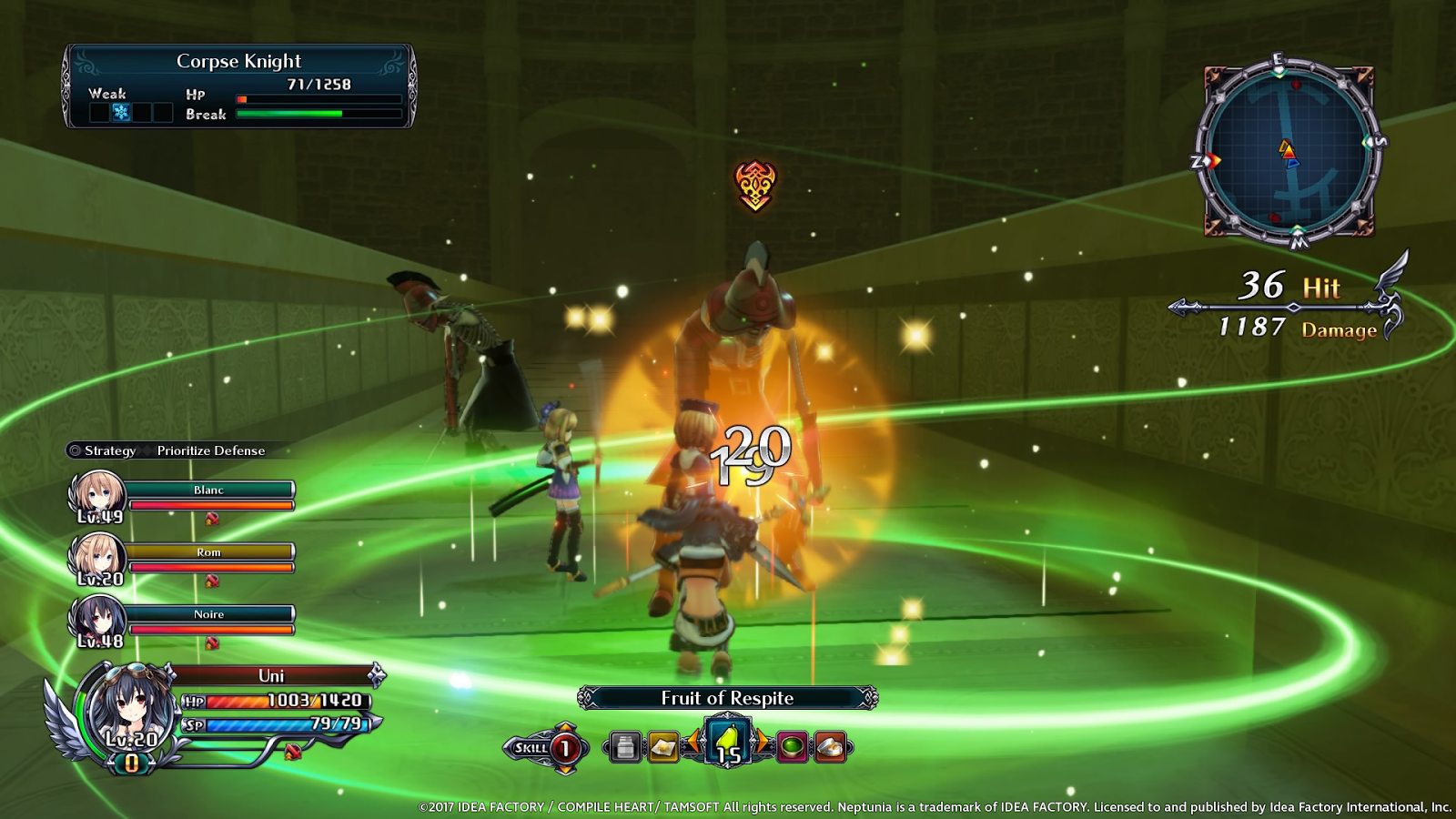 When I wasn’t giggling at Vert’s several hyper-intimate attempts to convince Bouquet, an excruciatingly cute NPC advisor of Arsgard, to join her on a sisterly date, or partially stunned by newcomer Kiria’s unexpectedly poignant performance near the latter half of the story, I was trying to come to terms with 4GO’s gameplay, which has the most basic and unsatisfying combat I’ve experienced this year.

Combat in 4GO is a flamboyant beast that’s been tamed and declawed. Swinging a sword or shooting a gun at a goblin doesn’t feel like swinging a sword or shooting a gun at a goblin; they feel like swinging an imaginary aluminum bat at an imaginary levitating pinata, or holding your hand in the shape of a gun and firing a make-believe kiss-bullet at your handsomely chubby cat. There’s zero weight to your attacks and, other than bright flashes and flying damage numbers, minimal visual feedback to indicate that the enemy is slightly bothered by them at all, until the final strike, when it tumbles to the ground and fizzles away. This becomes even more annoyingly apparent when you slam a Dogoo with a gleaming-spinning-sword-special and he continues to fancifully bounce and spin around like you just paid for his family’s vacation.

Of course, these issues are minuscule on their own, but when you combine them with moronic enemy A.I., reused enemies and bosses, and quests that force you to repeatedly travel to the same dungeons to engage with said reused enemies and bosses, the combat feels less like a parody of or statement on the inherent repetition of MMO’s and more like a virtual experiment to determine the bare-minimum amount of effort the developers can get away with while still keeping a Neptunia fan like myself happy. There are 5 enemy types in 4GO. Okay, that’s not actually true. But the enemy variety is so poor that you feel like you’re whacking the same five enemies with unhealthy regularity. And right when you think “Hey, maybe this new dungeon will have a sparkling new enemy type!” the same freakin’ dogoo you encountered in the first four dungeons greets you with the same jackass bounce and grin and moveset, except this time he’s pink instead of blue! And this time he takes 20 ineffectual whacks to smite instead 10.

And by the Goddesses are the enemies stupid! I swear, they make the foot soldiers from the Dynasty Warrior series look like an army of Neil Degrasse Tyson’s, masters of both the Shaolin spear and the minor axis of the galactic bulge. Standing or bouncing about aloofly in clusters of four to five, these dunderheads don’t even notice your existence until they’re close enough to sniff Neptune’s purple locks. And when this happens, you better beware, because each enemy in the group will viciously compete to discover which of them has the slowest, most obvious attack pattern, which primarily consists of a single swing followed by a 4 second pause, a window of vulnerability so excessive that I wish there was an option to set my weapon down to offer an inspirational snug.

Bosses are just as moronic and scarce in variety as their dimwitted subordinates, unless you count palette swaps as boss diversity. Granted, palette swaps later in the game wield different weapons, but, really, there’s almost no change in strategy to fighting a giant bipedal buffoon whether he has one sword or two. If you’re a melee character, like Neptune, and you pester him at close range with magic and melee, the boss can and will spam, for the entire fight, the same close-range move. If you’re a ranged character like Uni and you chip away at his health from several feet out, the boss can and will spam the same long-distance move. Sometimes the boss will try to baffle you and alternate attacks when he senses you no longer give a damn. This is how almost every boss fight plays out. It’s not about reflexes and strategy. It’s about having the patience to drain every excessive molecule of moisture out of massive damage sponges that mostly serve as obstacles to extend the length of the narrative. 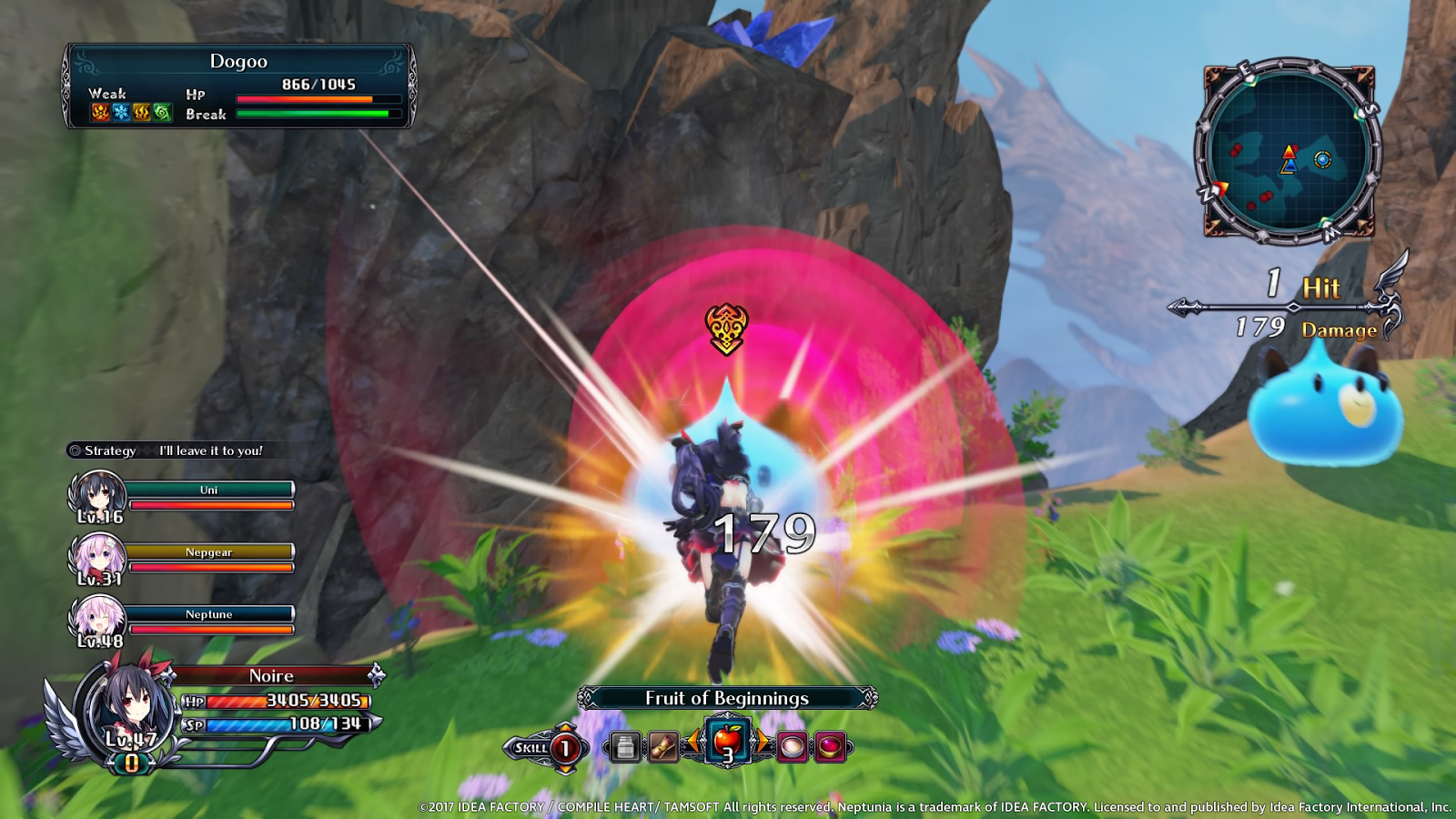 For all my grumbles about the combat, enemy A.I., and enemy variety, which I feel an obligation to harshly criticize because each aspect has so much damn potential that I know Tamsoft (Senran Kagura, baby!) can harness, I actually had a lot of fun with 4GO. It’s true, there were moments during the story when I wished I could bypass the enforced item gathering and beast hunting and boss fighting so I could head straight to the next dialogue event. That’s what a combination of combat fatigue and a desire to spend more time chatting with the gals of Gamindustri will do to you. However, if you’re in the right state of mind, one that isn’t in the mood for complexity or opposition, 4GO’s combat can be as therapeutically frivolous as its narrative. I really hope there’s a continuation of this flawed but enjoyable spin-off; if the series continues its trend of vastly improving the gameplay mechanics of its sequels, the next one should be quite Nep-sational. 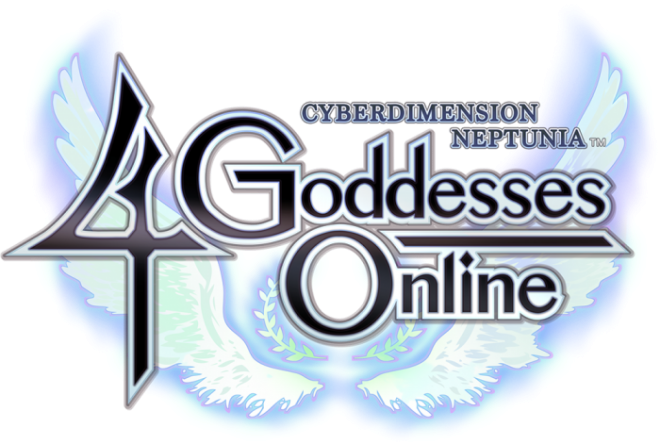 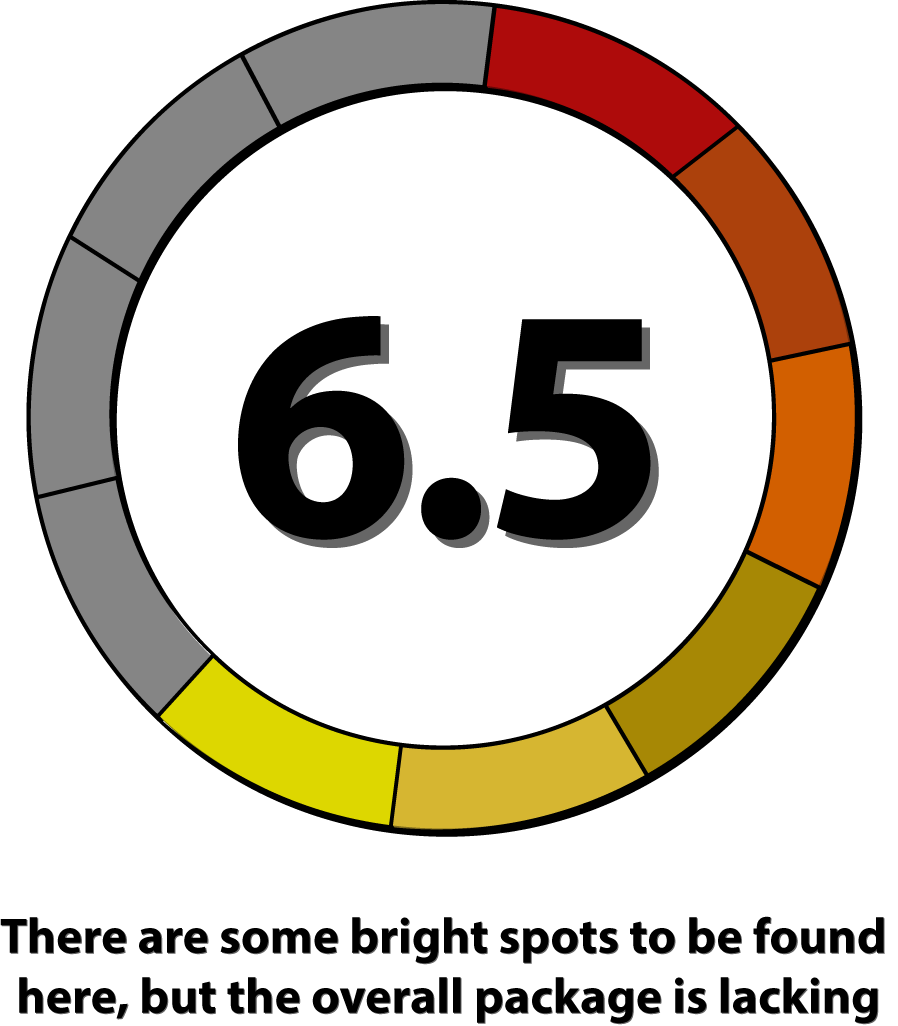