comments Share
You are reading
Holy Potatoes! What the Hell?! – PC Review

Diner Dash 666: Holy Potatoes! What the Hell?! is a new game from Daylight that was released on a Friday the 13th for no better reason than style. It’s a kitchen simulator along the lines of a Diner Dash or flash sushi bar games that were so popular a couple of years ago, with a couple of big twists.

For starters, all of your characters are potatoes. You’re a potato, your overseer is a potato, the gods you appease are potatoes, even your ingredients are potatoes. In your restaurant, T.S.I. Friday (I have it on good authority that the “S” stands for ‘Spud’) you are given a regular stream of sinners through the pit of judgement (Think of it like a fridge). You sort your sinners based on the stats of the sin that they committed (Tony Starch, for example, tends to lean more towards malice which makes him more suitable for the fryer).

The general premise is that gods place orders, you sort sinners to stations to process them into ingredients, and then use those ingredients in the stove of anguish to turn them into dishes, which you can then offer as tribute. The god gives favour based on how quickly they got their order filled, as well as the quality of the dish. The higher the stats of the relevant sin type, the better quality the ingredients, which means the better quality the final dish. 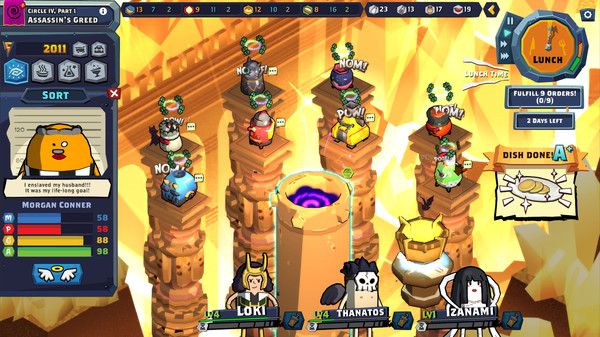 As you progress, the game adds additional steps of complexity that feel natural (much moreso now than during the beta) and not onerous. It continues to challenge you in gradual steps, and before you know it, you’re serving Baaley’s from the bar of deceit to improve their patience, processing sinners into seasonings, spending starch on temporary boosts, redeeming sinners with minor sins that don’t belong in hell, and even finding special sinners to offer directly to the spudly god of choice.

The music is something I would describe as being a sort of happy, creepy, cathedral-esque ambient electronica that makes you feel like cartoon potatoes are in hell being silly. Everything is silliness, from the sinners (Joan Snow) to the competitors in the cook-offs (Tarth Tater), the judges (Barley Queen), and even the cameos (Gorodon Yamsay). There’s nothing to this game that suggests that it takes itself too seriously… or takes itself seriously in the first place, and it shows. 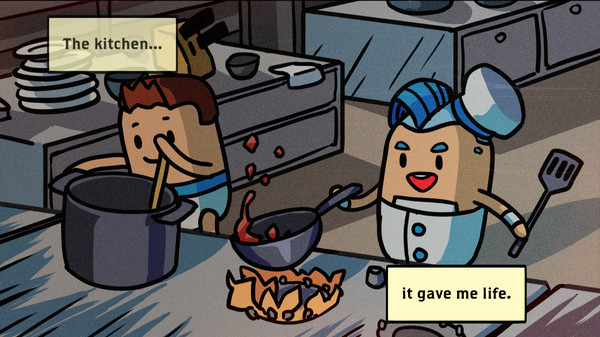 Daylight has learned from their prior games, have added increased difficulty scaling through complexity, and not just across-the-board inflation of all the numbers involved. While the game doesn’t really have replay value, it does have a very solid initial playthrough value that, if you like this sort of game, is going to be well worth the purchase. 28 hours of playtime has led to circle 6 of hell (out of 9, of course), and at only $9 right now, the value is pretty solid.