Assault Android Cactus has been out for a while now on the PSN and Steam with stellar reviews and has now launched on the XB1 with specific graphic content for the Xbox One X. So what’s it all about? I’m glad you asked. You see when an interstellar police officer with no regards for the rules decides to crash right through the hull of a ship all mayhem ensues. Taking your twin-stick controller in hand for some very fast paced Bullet Hell and Shoot ‘Em Up Arcade action, you and up to three others get to unleash all hell!

Every now and then Bullet Hells and Shoot ‘Em Ups are exactly what the doctor ordered and Witch Beam delivers. Not only is the Assault Android named Cactus armed to the teeth and badass to boot but she starts off with three others geared up and just as ready to go before unlocking the rest later on. Playing solo or having a few friends on the couch in order to blast through the hordes of enemies is simple to get into and easy to swap out of taking seconds and feeling rather seamless especially when you want to swap out your chosen character.

The action is quick, fun, and game overs only come in if you’re not fast enough. Instead of doing something “normal” like health bars or timing, the system works into the lore of it all with the Androids relying on their battery usage while in combat. Because it takes a lot more out of them they can only go for so long without recharging which is where taking out your enemies faster is going to come into play because they’ll drop the batteries that you and your cohorts will need to continue. 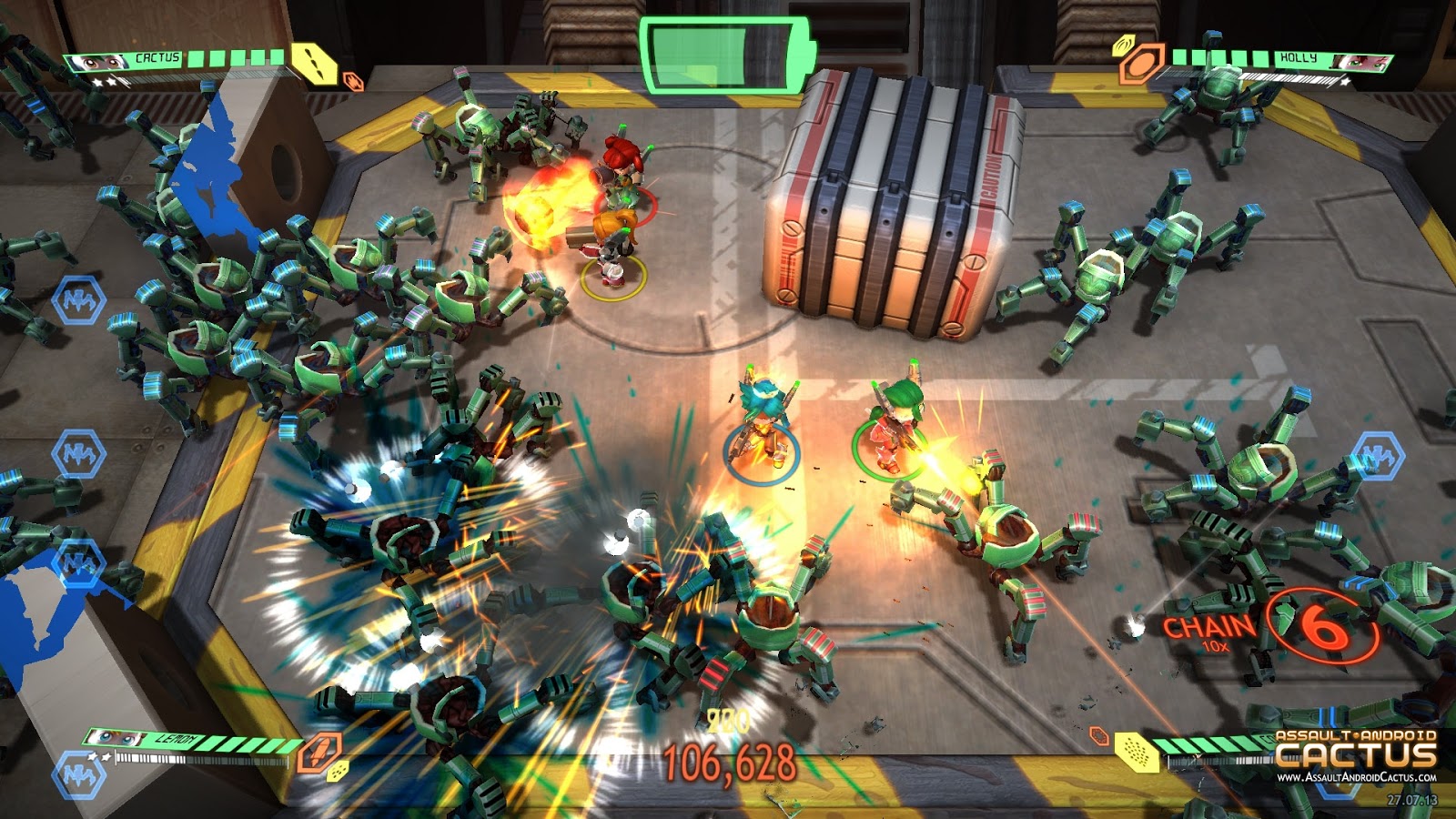 Now that being said, each Android does have health that if depleted will drop them to the ground in order to mash the firing-key in order to get back on their feet. The only drawback that this causes is a dip in your battery levels making it worth learning enemy attack patterns to not get hit. This won’t always work which is why there’s a wonderful dodge feature that is unfortunately tied to your more powerful weapon swap trigger. That is just about the only issue that ever came up. It would have been nice to have these separate.

This is perhaps one of the main reasons that Assault Android Cactus works as well as it does. You move around with one stick, aim with the second, fire with either the right shoulder or trigger and swap with the left set. That’s it. With less to worry about hitting on the controller you get to keep your eyes on the action which if very colorful and easy to lose yourself in. Wouldn’t be a Bullet Hell otherwise would it?

To help with Cactus’ warpath are three “upgrades” that rotate from one into the other as long as they are left on the ground. Enhanced speed, enhanced firepower and locking enemies down for a few moments as you get a chance to catch your breath as they are all turned to slag. You’ll really need to utilize these well for the boss fights which put everything you’ve learnt on your way up to them to the test. 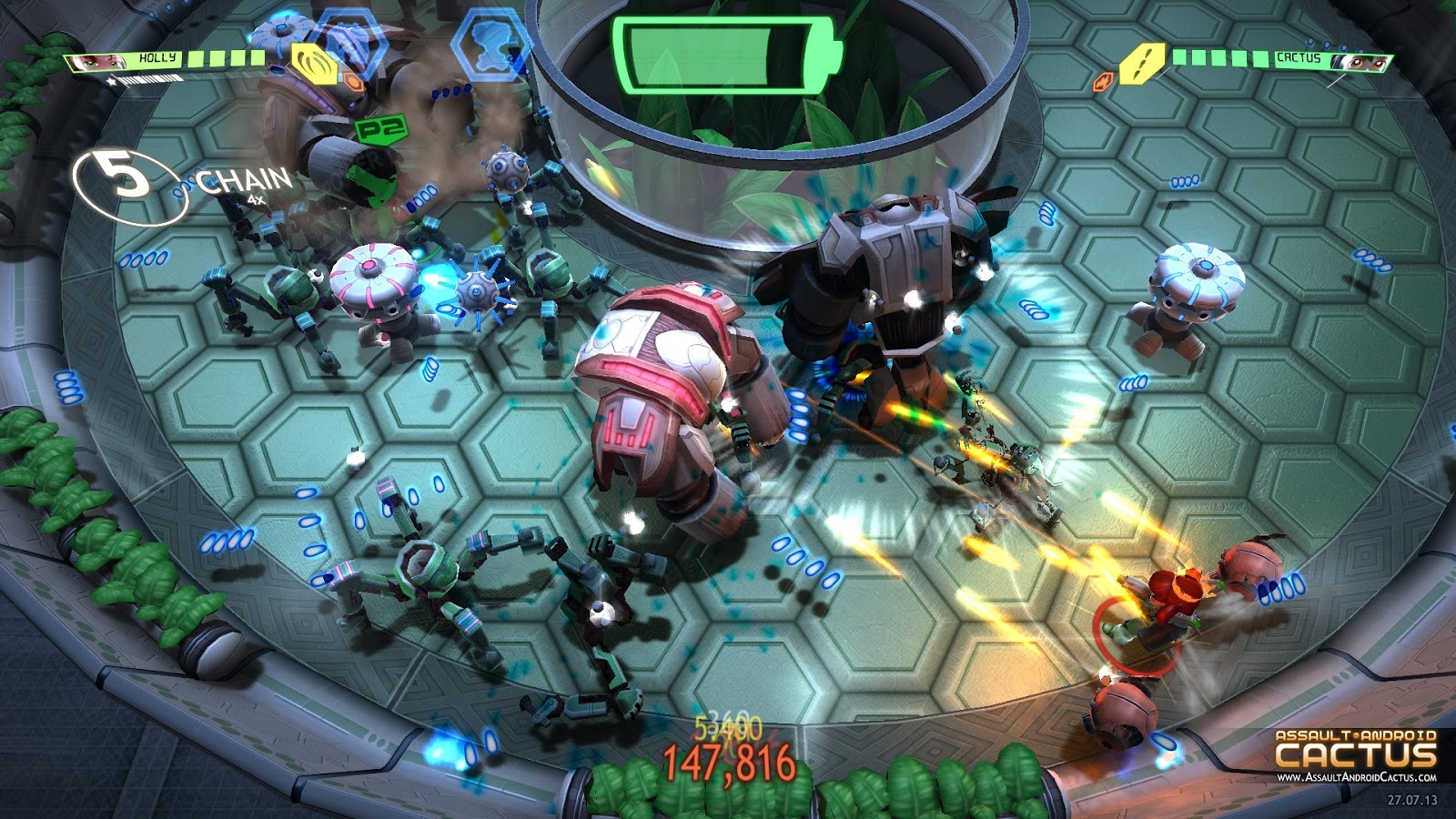 The boss fights were amazing. They were big, they were powerful and they had phases. Because of the battery system learning to take them out efficiently is an absolute must because you’ll only be receiving batteries once you’ve knocked them into their next phase. Otherwise? You’ll be restarting.

Assault Android Cactus was awesome. Once you’re fully done your first playthrough and maybe hit the S or S+ rank you’ll unlock multiple other modes to test your mettle against. Solo or with friends on the couch this was a blast to play and definitely made better with friends to yell at to get the battery before having to restart a particularly challenging stage once again!