Before getting into anything gameplay specific, the concept behind this turned based strategy is a good one. While maybe not being the most original as most science fiction has us blowing up the planet or ourselves in one fashion or another, Post Human W.A.R is all about the creatures and the robots that we left behind after we died out. The ensuing turf war? It’s good.

So basically the Human race is toast. We are long gone having left our machines and an interesting parasitic creature behind. Wanting to keep things as they were, the Robots fight to keep what used to be Humanity’s stuff in order while indiscriminately removing everything in their way. In an interesting spin on things, the parasitic creatures split into two factions. The first that is kinder of heart and just wants to be left the hell alone decided to co-exist with the remaining primates. The other however will take control of just about anything in order to wipe everything off of the face of the planet. Apparently just because we left didn’t mean that our tendencies did. The poor planet.

After running through a brief tutorial that also acts as an introduction to the available factions, what you do from there is up to you. Do you move into the single player campaigns for each faction or do you take your newfound knowledge online against other players? Choice is completely up to you though I was glad to see that there were no restrictions from one or the other because you hadn’t progressed far enough. 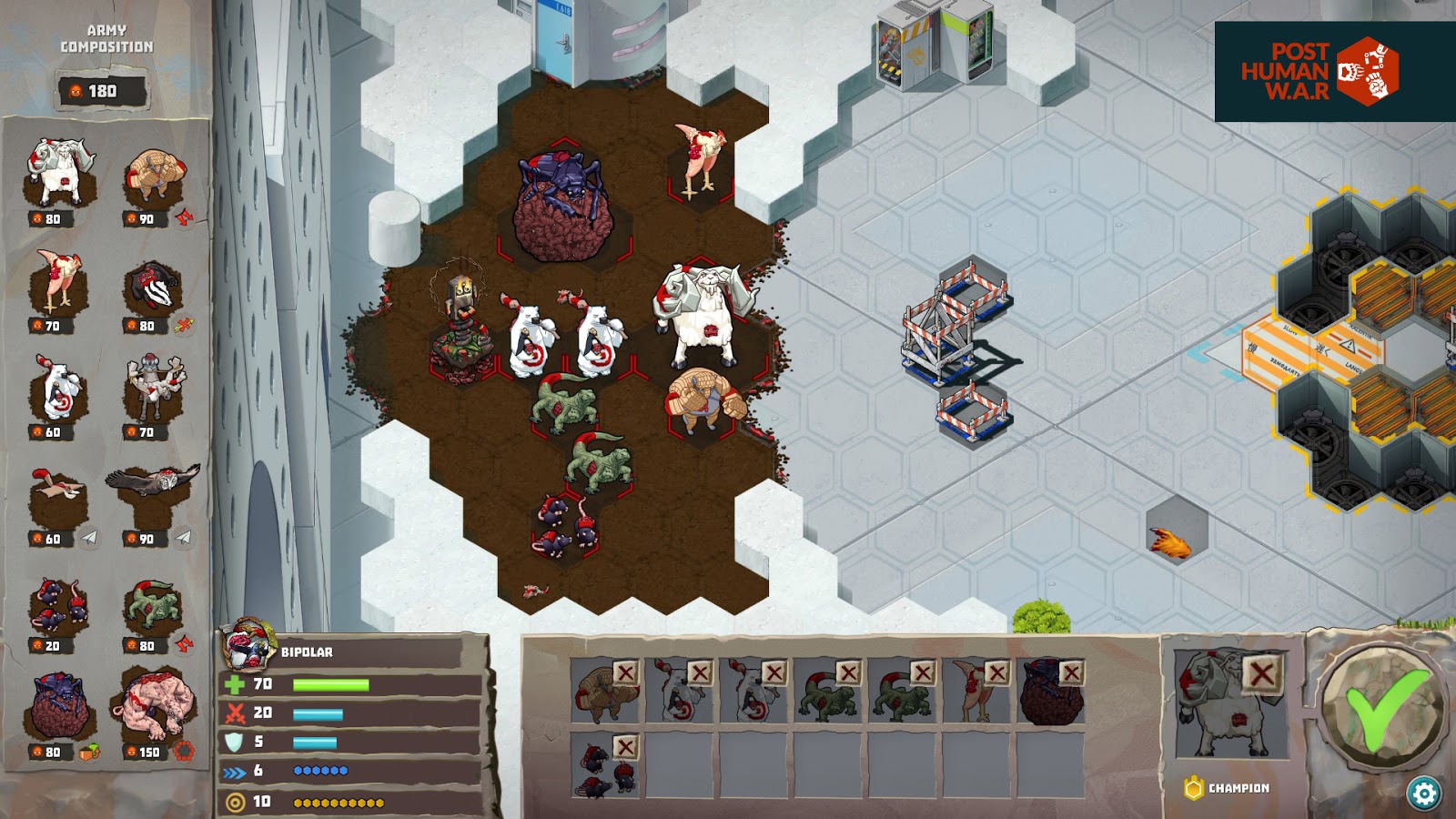 From the outset, Post Human W.A.R can seem like it’s just another strategy versus into the long running sets that have been around for a while. The formula would also indicate this as gameplay plays out in a your turn, their turn, your turn until there is only one side left standing. Where things start to get interesting is that each faction has to promote a unit as their leader and if they die? Then that’s game even if the rest of your forces are more than capable of continuing.

This one factor alone can change how you decide to play out your moves. Did they move their leader unit up pretending that the unit in the back is the leader because it’s safe? Or did they leave their leader unit all the way back there because of that reason, that it should be safe. You never really know until you’ve defeated it unless of course you taunt your enemy in the best way possible. Essentially saying “Come at me bro” you can unveil your lead unit for a boost to their performance. The downside is that your opponent may simply decide to try to bypass your forces to take them out all the faster.

Also an added boost is that each faction has a lot of units to choose from to cover any number of situations that you could find yourself within. Did the set you chose last match not quite work out? Try another variation. Each unit has a cost against your total amount so as long as you stay within that margin you’re good to go. Not everything will work against everything as each faction has their own particular strengths on top of having a crazy amount of choice for your forces. This honestly keeps things interesting! 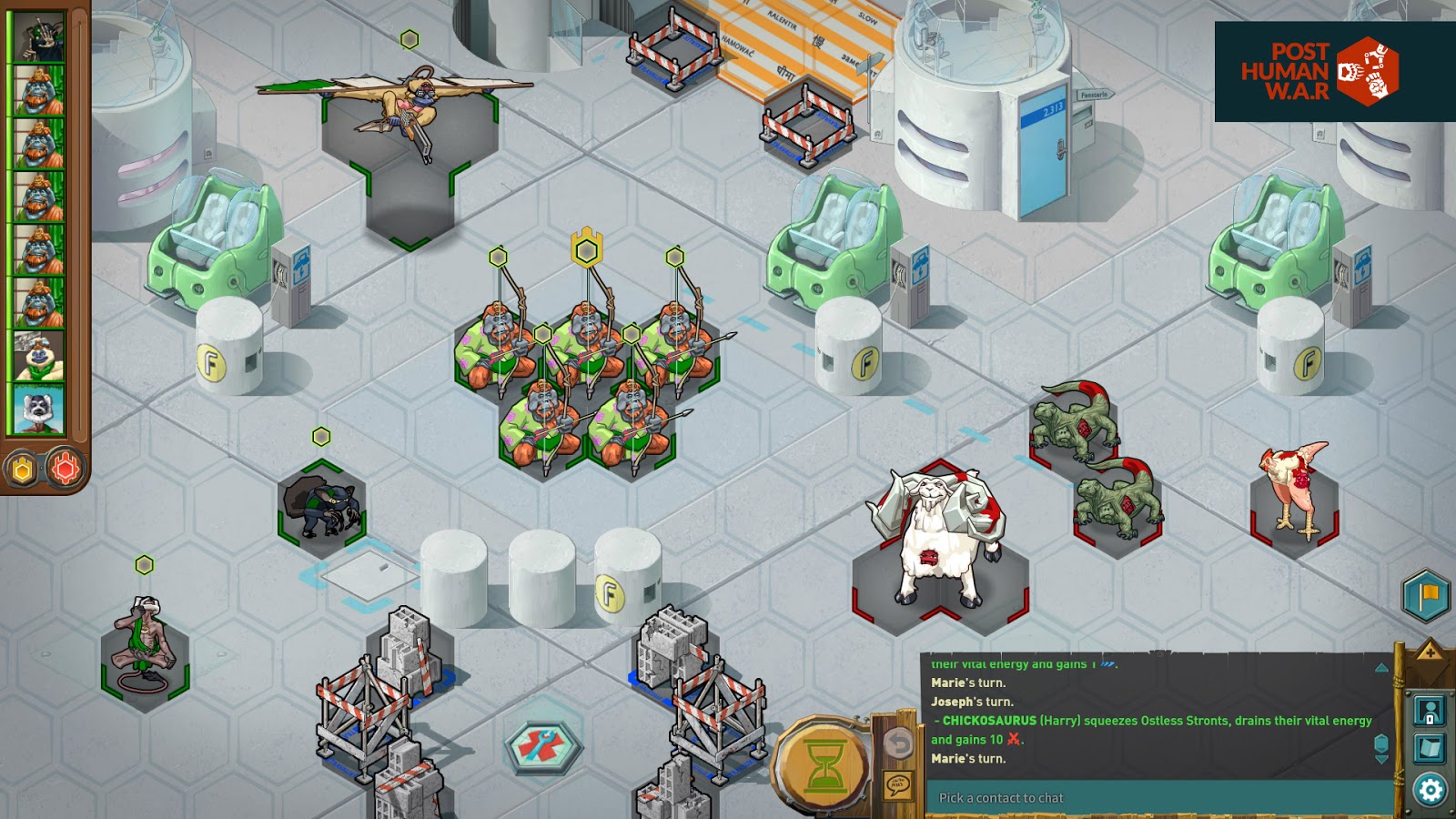 Finally, while it may not be the grandest of things, I was extremely impressed with how smooth the experience flows. Unlike a lot of titles where you move one unit, then the next, then the next, you can just move them all at about the same time and then worry about their actions later. While one unit is moving another can be selected to do the same which saves on a lot of time and even the CPU can do the same. It’s a small thing in the grand scheme of things but it’s a bit feature when you think of how much time it can save.

Post Human W.A.R is a great strategy title that has a lot going for it. Putting strategies into place can take some time as you need to worry about how to keep your leader unit alive while also maximizing their use in order to achieve victory. With the amount of choice that each of the three factions provides, single player campaigns and multiplayer, there’s a good deal of content just waiting to be explored.