If I had to sum up Golem Gates in one statement, it would be stop reading this right now and go get it. I honestly had to remind myself that it’s a currently an in Early Access title because I was going on my merry way to score it. Brilliantly meshing the real time strategy style and that of a collectable card game, the dark yet shiny metallic colours are amazing to watch as they traverse an ever present fog of war.

Other than maybe some balancing issues and adding in the rest of the campaign chapters, Golem Gates felt complete and very solid. Put into the role of the Harbinger, you are tasked with eliminating all threats that currently lie in the way of healing your world. Armed with the ability to summon offensive and defensive units as well as the ability to apply augmentations and impairments, your goal is clear. Eliminate everything that is not under your control.

Golem Gates has streamlined some RTS elements in order to make things not easier, but more manageable when combined with the CCG elements. Instead of using drones in order to collect resources, you instead have an ever filling energy pool that is used to summon Glyphs onto the field. Glyphs are essentially your cards that are present in your deck. The more powerful the Glyph, the more energy that it costs. Starting off you’ll be wanting to hold back on summoning the big things not because of the amount of energy required, but because of the recharge rate of your energy meter. 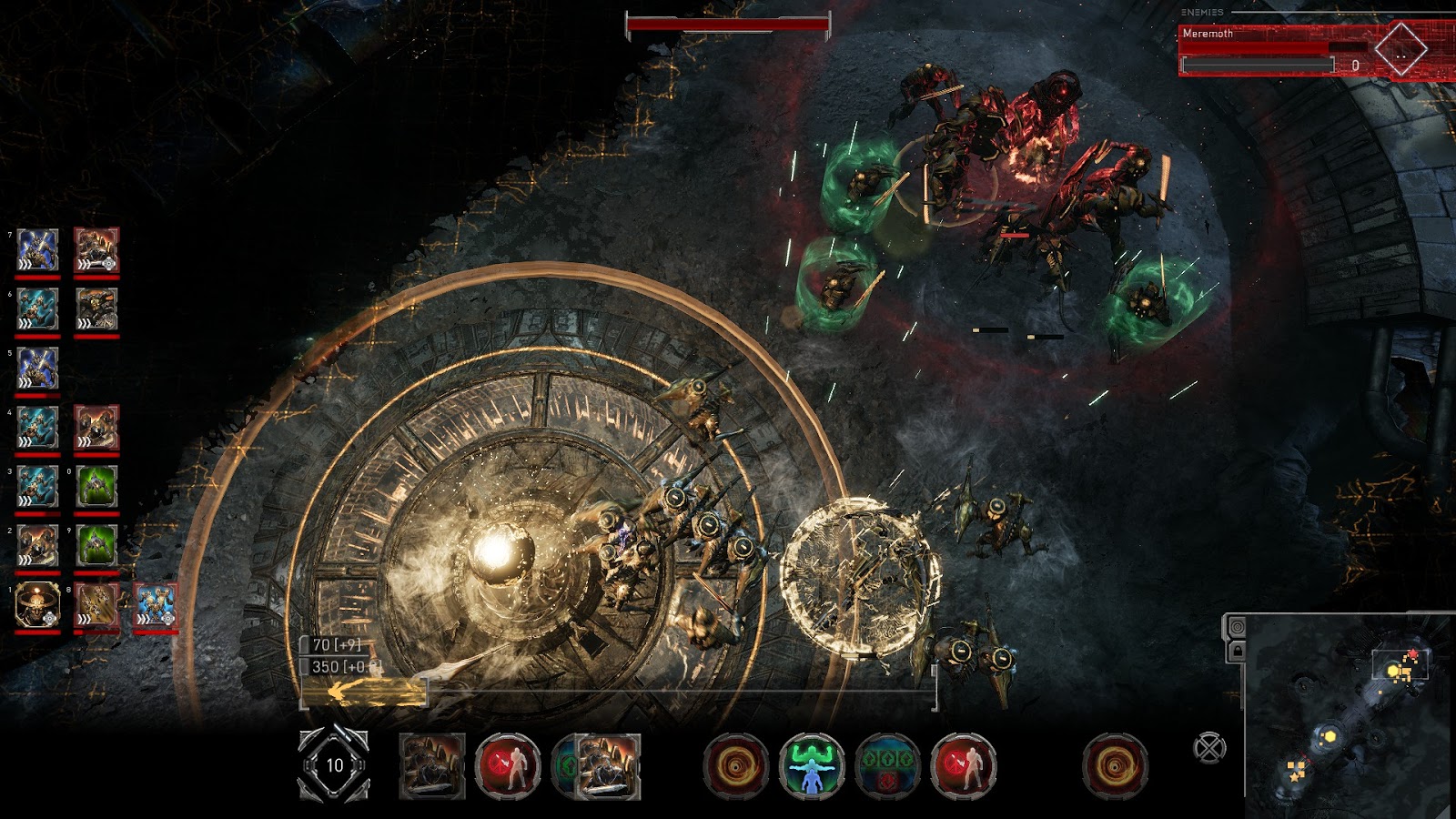 Starting off slowly you’ll need to play a few Glyphs on the field either for defensive purposes or to get more Glyphs in your hands. Summoning a few units will also do the trick as the more you play the faster your energy will fill up. This only works until a certain point in time however and after that point you’ll need to venture forth in order to start capturing either unoccupied or enemy generators to speed up your progress.

Because everything is “card” based you don’t have any structures to worry about which also speeds things up. Instead all of your worry and your attention can be dedicated to your units. The variety of these can make for interesting strategies as you have both basic and advanced melee, ranged and arcane that fall alongside more stationary structures like turrets and flame pillars. This lets you easily decide whether you want to keep units around a generator or to send them off to hit the enemy or one of their own placements. The choice is entirely yours just don’t want too long as the enemy will simply keep stocking up like you and the results will not be pretty.

Moving your units around is easy. Simply click and order them out. Where things get a bit tricky however is that there is a constant fog of war. The most you can see is where your troops or where your turrets are currently placed. Outside of that you’ll often have to rely on scouts to make sure that you aren’t walking straight into an enemy force when you could have held back and used your currently in place defensive turrets to your aid. 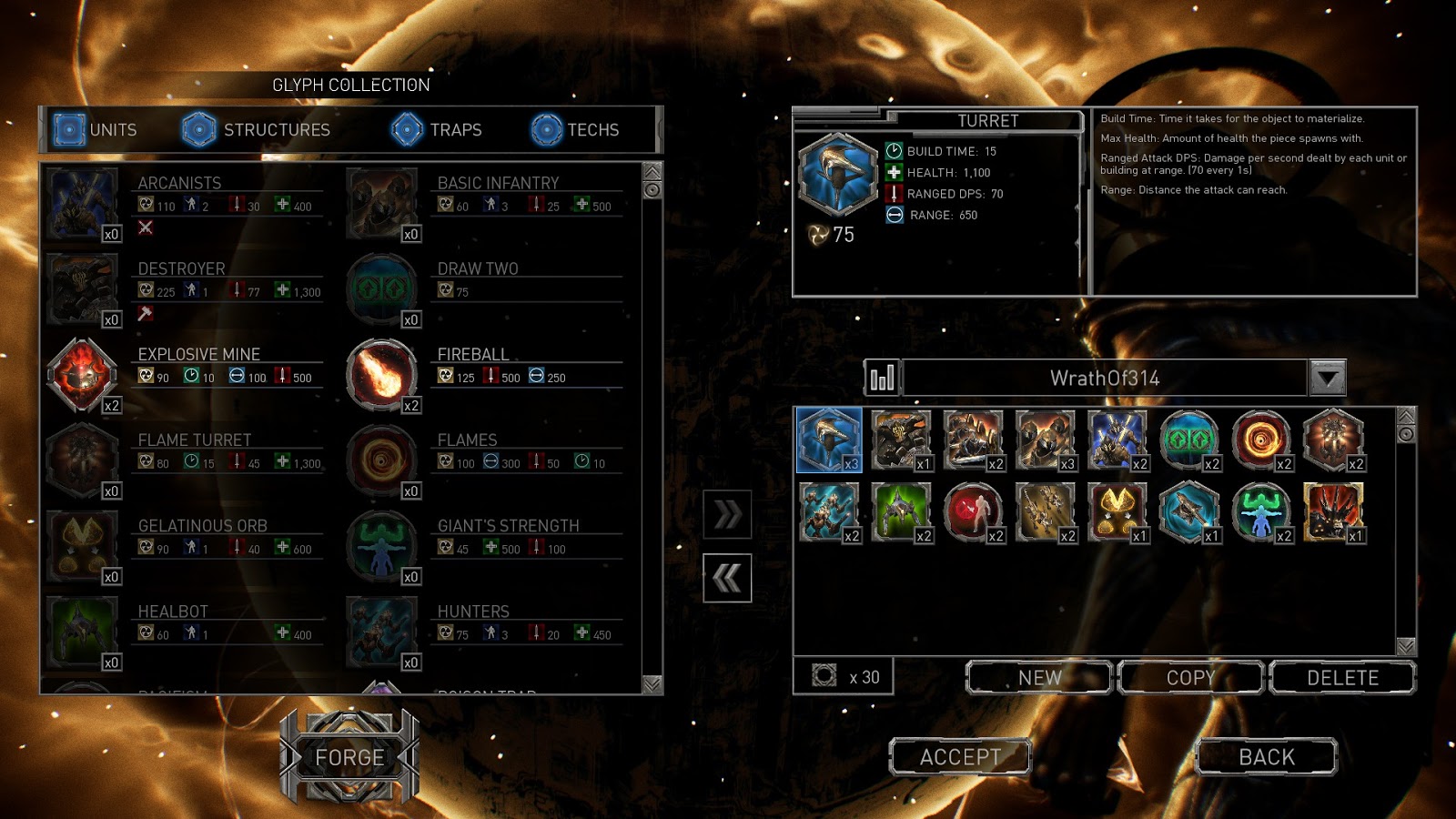 Because of the fog of war and only being able to see your units, you are allowed to play Glyphs as long as you can see the ground. This means that if you need more troops in a particular location, play the Glyph if you have enough energy and turn the tide of the skirmish. The same can be done with turrets and fireballs. Simply play them if you can which is much better than having to wait for them to run all the way over just to be marsacred because the battle was already over.

Adding to the single player campaign there are also trials, survival scenarios and a versus option to go up against other players or an AI. Honestly as I mentioned earlier Golem Gates feels rather complete so other than the extra campaign segments it’ll be interesting to see what is really added between now and full release.