comments Share
You are reading
Attack of the Earthlings – PC Review

Intro to the game and Developer information

February 8th marked the launch date for a new strategy game entitled Attack of the Earthlings developed by Junkfish. This company is based out of Scotland and has one other title called Monstrum, a survival horror game. Attack of the Earthlings is not in that genre. Instead, this game resembles XCOM in many ways except that players are the aliens. Your objective is to take out Galactoil, a corporation run by humans, whose objective it is to invade your planet.

Right off the bat players get to see what the controls are in the menu screen. It is a standard setup using WASD keys, Q and E to rotate the camera, F1 for the tutorial, and Enter to end a turn. That’s right, this is quite similar to XCOM and other turn-based strategy titles. And the player has options to adjust the graphics like altering the shadows, anti-aliasing, and texture quality. You’re also able to adjust the volume of the music or special effects. Again, nothing in the menu is particularly noteworthy as most of the keybinds and options are fairly standard across this genre. 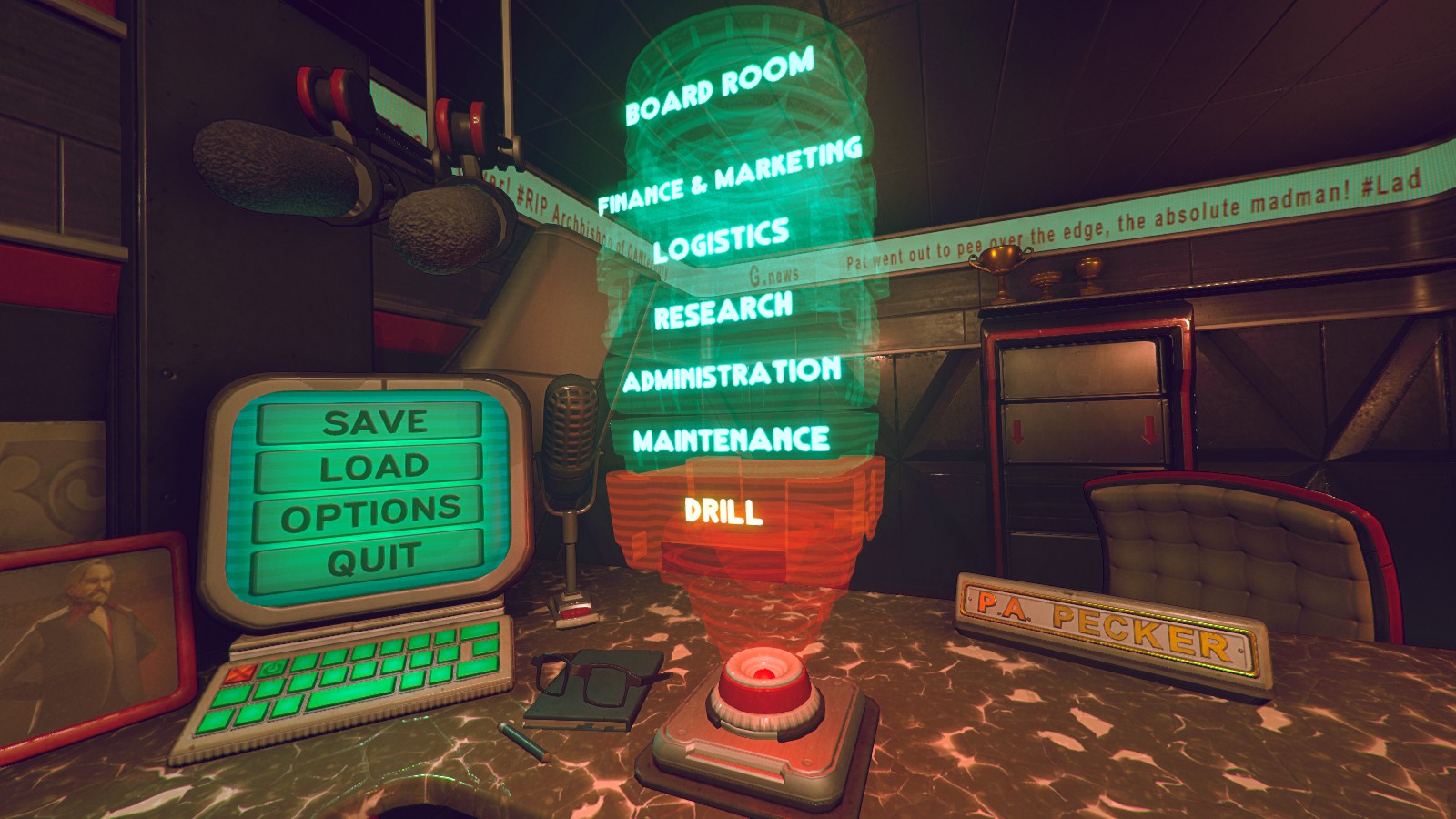 One of the good things about this game is the ability to skip the tutorial. The player experiences the fairly short introductory cinematic allowing the focus to be on the story objective. As you progress, the game does offer tool tips when a new ability becomes available. If you’ve forgotten, hitting F1 will cycle through the hot keys to make playing much easier.

During the first mission you hear the voice of Mr. Pecker over the intercom and its hilarity is not lost on the player. The game doesn’t take itself too seriously with some of the character’s commentary. I mean, when you hear lines like this: “That means no more using the coil to microwave your lunch!” you know the game is meant to be fun, not serious or aggravating.

It’s also the type of game where you lose the map if your Matriarch is killed. It is your only unit but you can gain more by feeding on the humans you’ve killed. This gives you biomass which allows you to spawn grunts so that you can effectively swarm your opponents. It takes four biomass to create a grunt and you can only make one per turn. Once you spawn them, they can move and attack right away. Having this ability provides a strategic advantage against the humans. 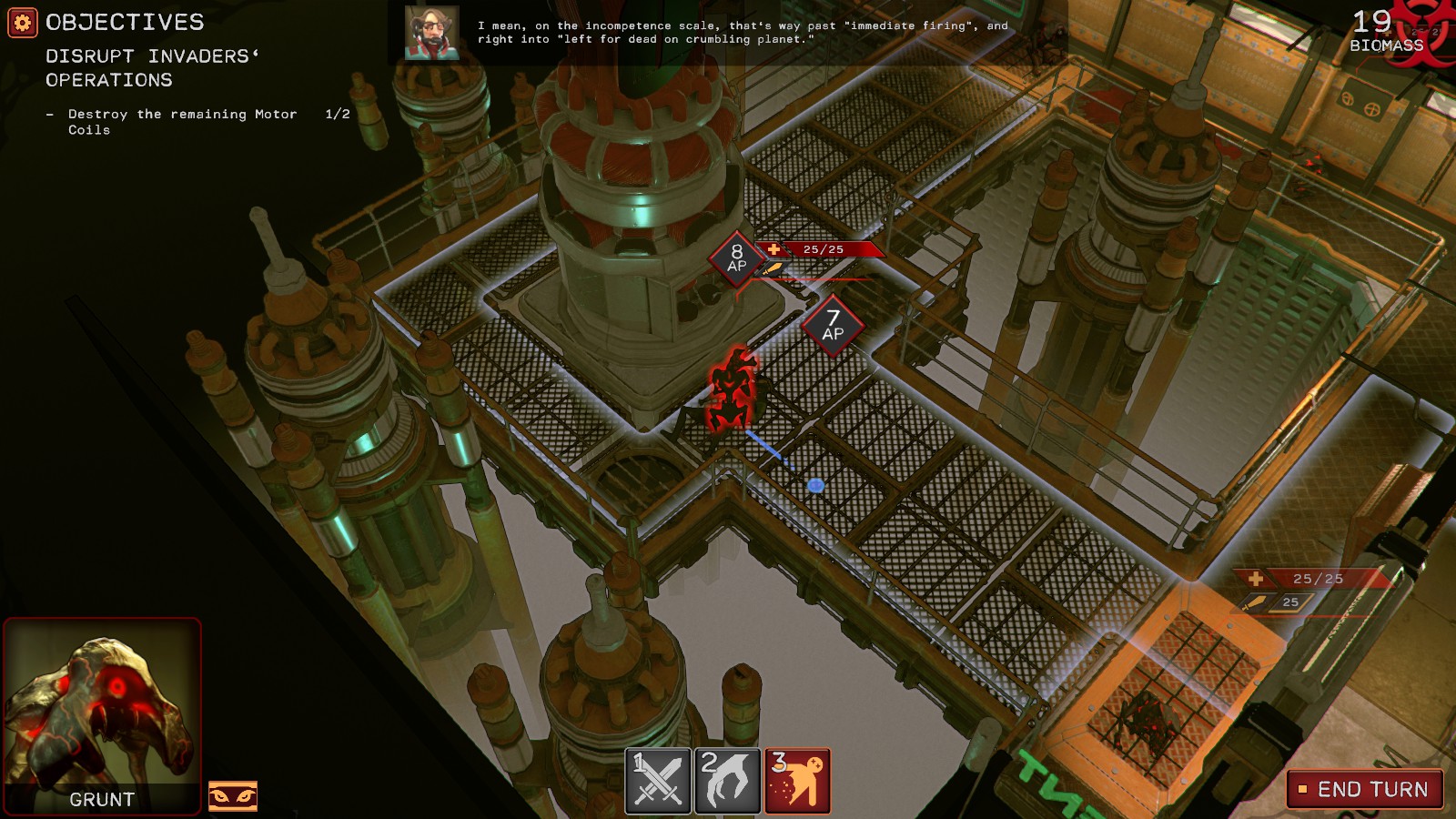 Players start with 8 AP, or action points, to use every turn – though, nothing states that all AP needs to be used. The different abilities will consume a certain number of AP. For example, entering a vent uses two AP, presumably one is used to enter the vent and one is used to move to the other side. If you decide not to move to the corresponding vent, you don’t use additional AP on the turn that you do move your grunt. It also means that a player can use the vents as a strategic hiding spot, but only the grunts are small enough to do this.

As you progress in this game, new abilities become available like being able to possess a low level human. You can use this ability to distract the armed humans that can do tons of damage in a single shot (as in, enough to kill your matriarch which means you lose the level). This adds a level of intrigue as you learn other abilities to effectively take down the humans. After all, it is your planet they are trying to take over…

You also have fun abilities like coordinated attacks. Once you have a human that has more than 25 health (which is how much damage you can inflict in a single attack), you can setup a multi attack so that nearby humans aren’t alerted to your presence. This also adds another strategic level to the game and I greatly enjoy this about Attack of the Earthlings. 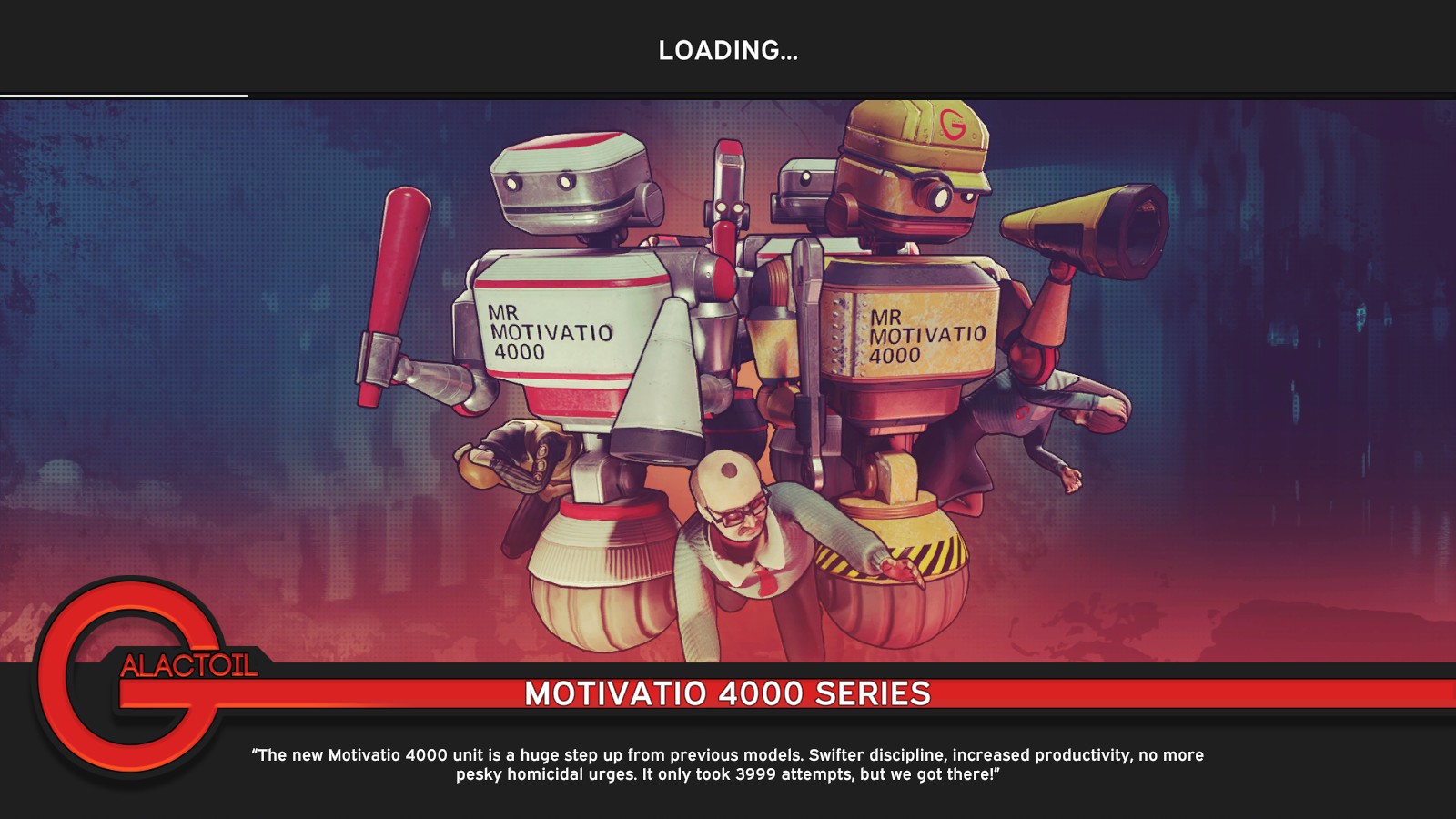 The music in this game is quite unique in that it’s synthetic in sound but in an old school detective story kind of way. I almost heard a bit of circus undertone but that might be a stretch for most people to grasp. Unfortunately, I find it’s hard to explain the music style in this game, though the music doesn’t detract from the story. That said, I was surprised at the music style because when I first looked at the trailer for this game, I expected the music to be a fusion of cyberpunk and alien sounds but found myself pleasantly surprised by the developers decision.

The sound effects for Attack of the Earthlings are exactly what you expect out of a strategy game. The vents sound like vents, the consume ability sounds like sloppy eating – which is both disturbing and amusing at the same time – and the gun fire effects are what we expect. Therefore, all of the audio used fits perfectly. Even Mr. Pecker sounded like a nerdy overlord.

At the outset of the game, players watch a fairly short cinematic which details the backstory. It reminds me of a comic book graphics style which is quite good. Even the detail of the top down 2D nature lends itself to this same graphics style. It’s certainly not a triple A game in any way, though its graphics are crisp and clean.

The main menu has a news menu scroll bar which adds to the humour in Attack of the Earthlings – a fact that is obvious by the human leader Mr. Pecker and his choice lines.

Stylistically, this game is befitting of its genre and here is an example of what I mean. 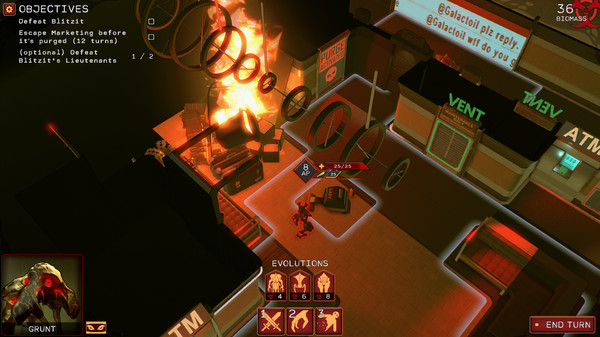 Overall, this game has been fun to play. It’s witty, it’s simple to understand, and it allows creative freedom for executing humans. The gameplay is quite smooth and enjoyable. Playing the aliens is rather fun and it puts a different spin on the whole genre. From what I’ve seen, most strategy based games use the human perspective whereas Attack of the Earthlings flips the norm.

During gameplay, I noticed that the aliens don’t talk to each other, which would have been interesting story decision. That may not be standard fare for strategy games, but being able to understand an alien point of view would have been a lovely addition. (Though, not knowing the alien intentions isn’t necessary to the progression the narrative).

I would give this game an 8 out of 10 because I would love to see more development on the part of the aliens. I enjoy the music choices, the graphics style, and the challenge of the game itself. I’m glad that this game doesn’t rely on weird mechanics that murder your units unfairly. And, for an inexpensive strategy game, this rates fairly high. I definitely recommend this game to fans of the genre for a light and relaxing gameplay experience.