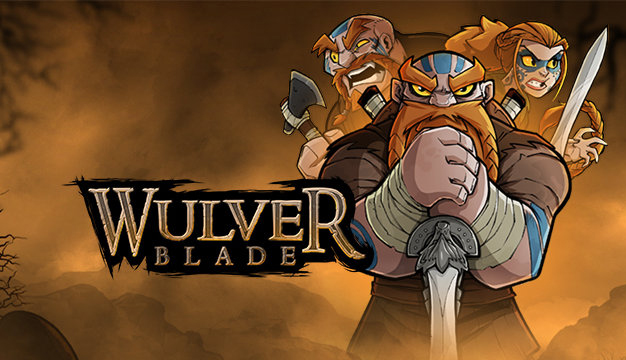 In 43 AD, the Romans really had no business invading Britain. They had the richest leaders in the world, unrivalled military security, and more bath houses than Bacchus, the god of wine and nubile frenzy, could shake a bunch-stem of grapes at. So when the Romans brought their military man-muscle to Britain’s vibrant landscapes, for the second time in a century, they didn’t do it to overthrow a threatening adversary or “procure” fresh real estate for a soothing yet unsanitary communal bath enterprise; they invaded to improve the reputation of their new emperor, Claudius.

Both the Senate and Rome’s House of Lords had very little faith in or respect for Claudius. They might have considered him weak due to his physical disabilities, which included a limp, foaming of the mouth, and involuntary shaking of the hands and feet. Or perhaps they thought he was involved in Caligula’s assassination by members of the Praetorian Guard, the emperor’s so-called elite bodyguards. They did, after all, install Claudius as emperor directly after assassinating Caligula, who was both emperor of Rome and nephew to Claudius.

Whatever the case was, they found Claudius to be undeserving of leadership: a feeble-bodied relative of royalty who was never meant to be emperor. Thankfully for Claudius, in Roman culture, the best way to prove your worth as a leader was through tried-and-true military achievement. Invading Britain and taming its indigenous “barbarians” offered Claudius not only the chance to quell his political opposition, but also an opportunity to secure his throne by honor through victory. 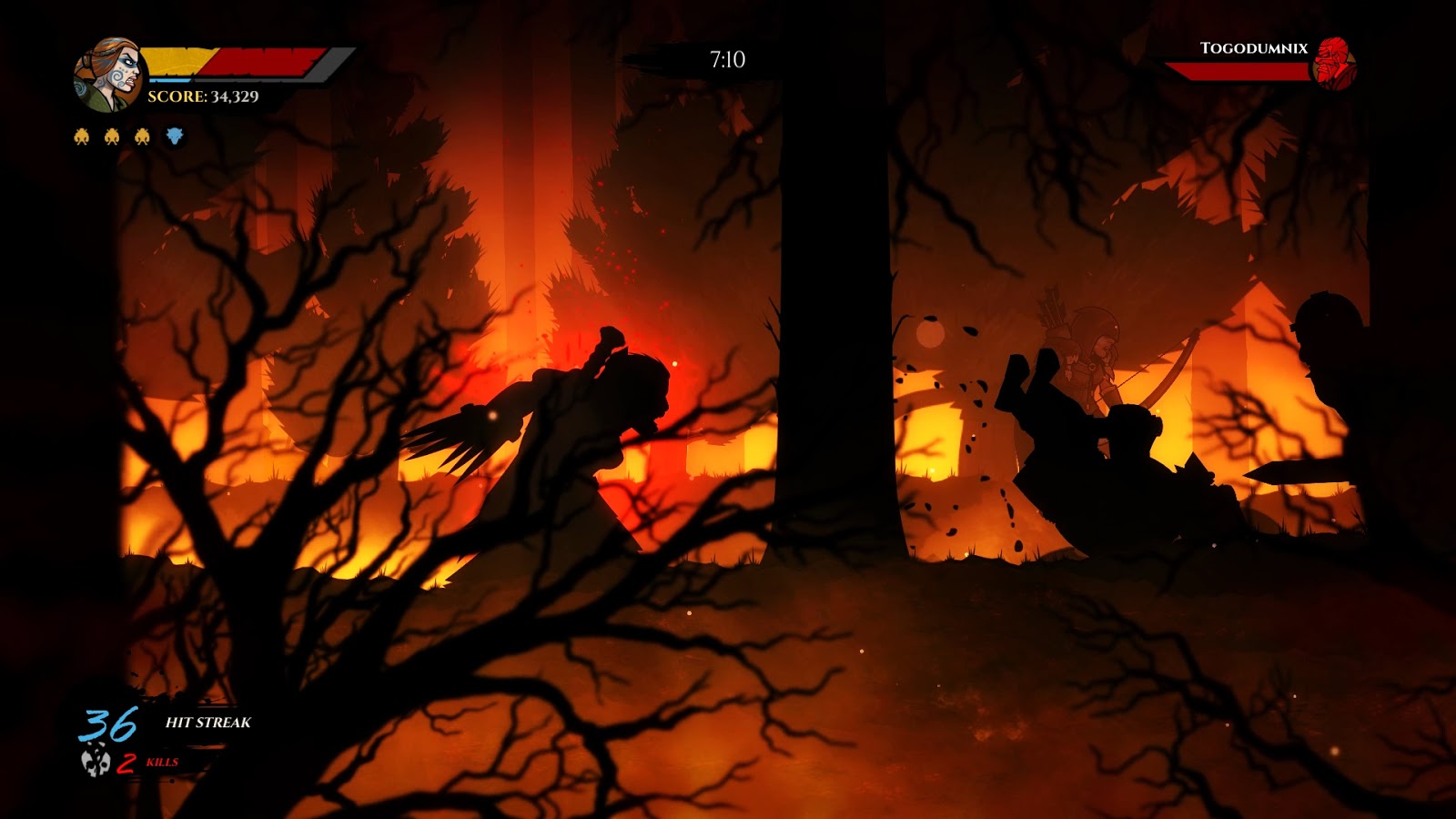 The invasion was a success. But throughout Rome’s 350 year occupation of Britain, it never achieved total victory. Northern tribes, the Caledonians, managed to continually band together and stand their ground despite numerous Roman onslaughts. As a result, Rome failed to capture their land or convert their people to a more “civilized, Broman” way of life.

In Wulverblade, you get to roleplay, in side-scrolling beat-’em-up fashion, as a ferocious guardian of the north, bringing your fight to the Roman strongholds before they have a chance to slaughter their way to your villages, your people. Whilst Wulverblade does combine history and Celtic mythology to create a contextual impetus that is rare for these types of brawlers, it has a few design issues that can sabotage the smoothness of combat in particular situations.

The Roman Empire’s military was a marvelous entity. Other than possessing the toughness and stamina of a juiced-up pronghorn antelope at the top of the dominance hierarchy, Roman soldiers were disciplined to be both flexible and cohesive on the battlefield. This meant that, moments after an issued command, a unit of soldiers had the capability of gathering in a formation most suitable for any offensive or defensive situation, allowing them to fight or guard as a solid, fluid unit, rather than a mob of flailing individuals. 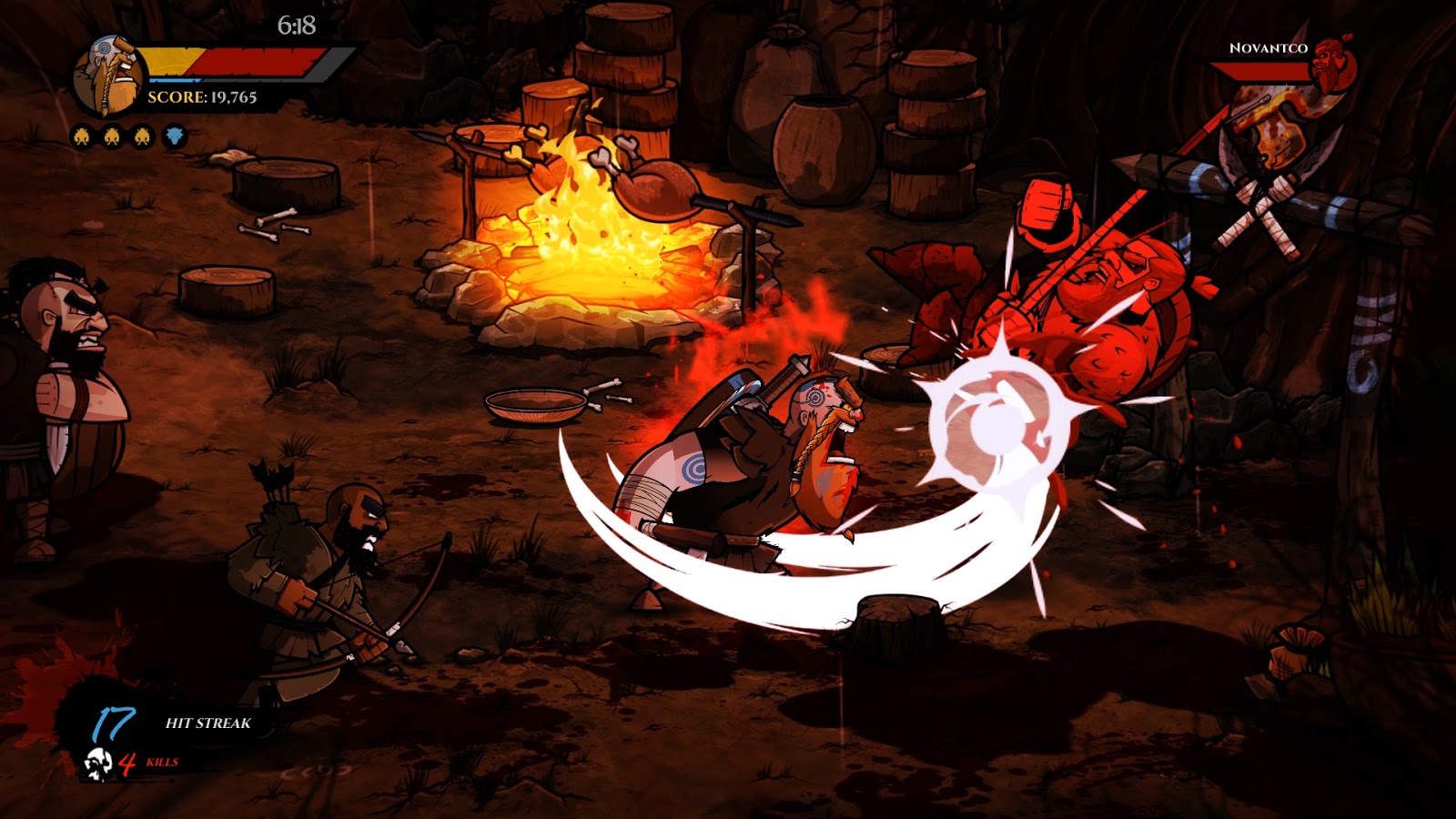 You, as one of three Caledonian warriors, who range from sluggish yet hard-hitting to brittle yet advantageously swift, have a few tricks to bypass these Roman battle disciplines: unrivalled barbarity, and the element of surprise. Bringing desperation for victory to their turf and towers is the last thing that they, all strapping and hyper-civilized, expect. So you raid their camps, slicing, grappling, and tossing any soldier brave enough to test their duty to Rome against your virtuous lust for independence.

You have a basic attack that, after a unique heavy weapon is found in the environment, can be combined with a strong attack. If an enemy dares to get within aggressive-kissing-distance, your warrior automatically grabs him by the pecs, granting you the options of knuckling his face or throwing (or suplexing, if you’re playing as the tank character) him into a crowd of his own cohorts. On top of this basic but useful repertoire, you can launch, juggle, ground-impale, downward thrust, slow-motion counter attack, and shield break foes, as well as block, run, and dodge-roll into and away from greasy enemy strikes.

At the beginning of this virtue quest, on normal difficulty, the Romans (and their converted tribesmen) seem merciless and insurmountable. They swarm in on your position, simultaneously hack you with swords and puncture your fiery beard with arrows, and generally deal damage that can be overwhelming and unheard of to even the elite Caledonian Warrior. Initially, this can be  surprisingly frustrating, especially when your character’s mouth is agape in embarrassment as he’s being rapid-fire pincer attacked by chauvinists in silly helmets. However, as you experiment with your move-set and further observe the enemies’ behavior, you learn how to make heavy use of the dash and dodge-roll, to maintain a distance wherein their aggressiveness is rendered much more ineffectual. 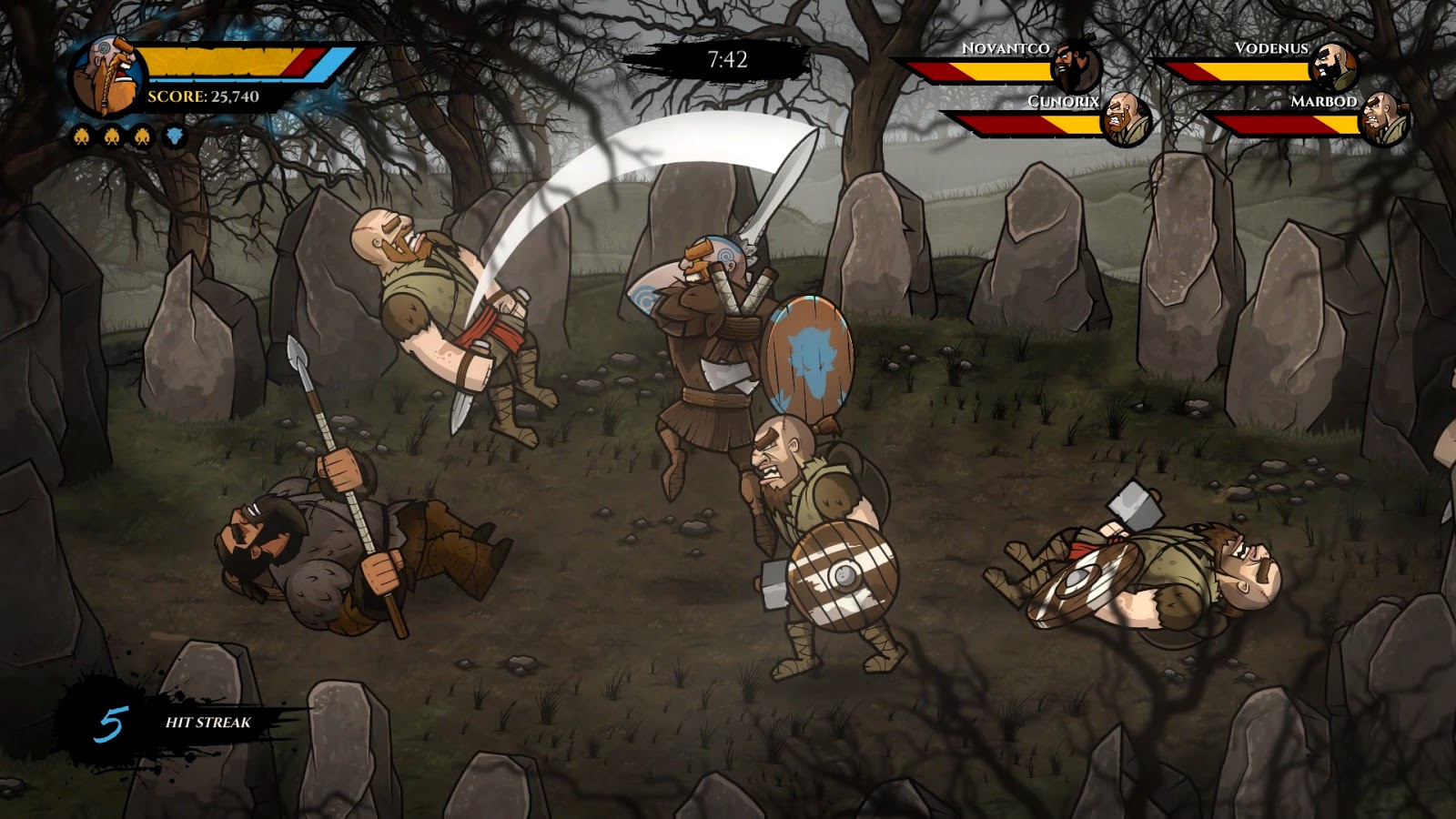 But no matter how skillful you become during your first 5+ hour playthrough, you’re going to be harrassed by seemingly unavoidable blows, particularly from the bosses, whose meaty health bars are a visual representation of militaristic hubris. This is where two Caledonian superpowers can potentially come to your aid: the ability to, once per stage, summon a pack of mega-wolves, which devour everything on screen or, in the case of bosses, inflict enough damage to make a General consider immediate retirement from Roman service; and the ability to enter rage mode, a trance-like state that slows down time, multiplies your damage, and regenerates a portion of health.

You’ll certainly need these powers to not only help you manage the challenge Wulverblade belligerently and methodically marches toward you, but to make up for the moments that can come off as stupidly, mechanically unfair. As I mentioned earlier, these Romans carve another notch on their helmets for every time they successfully pincer attack the most sensitive zones of your crotch and hamstrings. So being able to turn frequently and reliably in the opposite direction to block or stifle an enemy’s sword should be an inherent talent. It isn’t. There can sometimes be a delay when attempting to perform a quick turn. This, naturally, can lead to being stun-locked from behind by a flurry of sword swings you saw coming from three feet away.

Furthermore, the grappling and throwing mechanics can backfire all up in your vicious face. You automatically grab any Roman that encroaches within snuggling distance. That’s phenomenally helpful, if he’s the only idiot within two feet. But more often than not, the idiot you’re grabbing is surrounded by at least two other idiots. So while you’re standing there – panicking over whether to punch, throw, or unhand your foe – with your hands wrapped around a Roman’s beefy throat, his cronies are relentlessly landing free hits on every inch of your torso, no matter how fast you try to react. Fortunately, by staying mindful of distance, you can mostly avoid the humiliation of these situations. 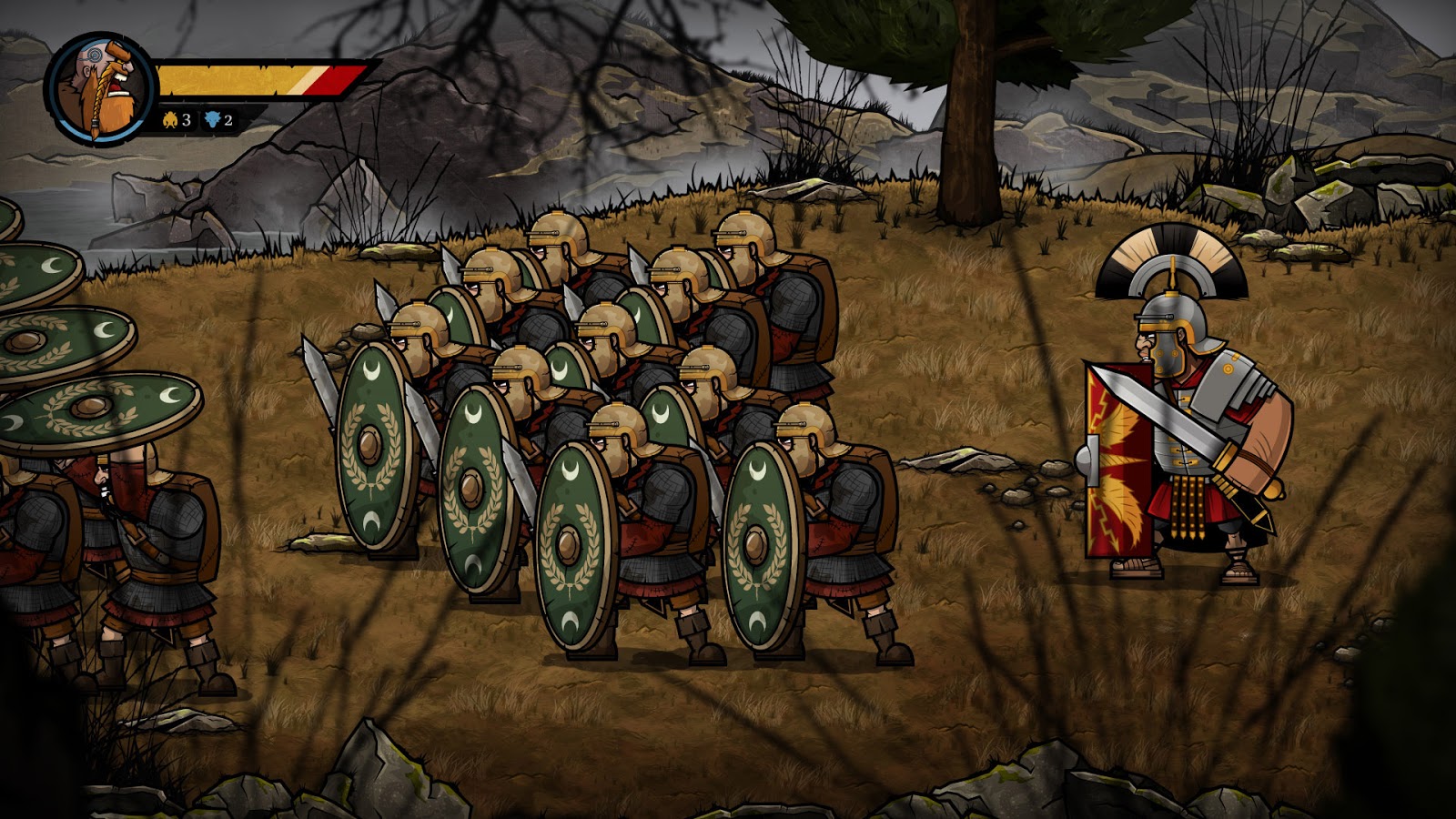 Historians don’t really know why the Romans were unable to conquer the Caledonians. Maybe the Caledonians, thanks to the northern mountains, had a strategic geographical advantage. Maybe the cost of seizing the region was more than any perceived benefit. Or maybe the Caledonians were too damn tempered in the art of savage, severed-head-tossing warfare to be subjugated and converted. Who knows? I do know that Wulverblade offers, in dynamic-comic-book fashion, a fantastical yet historically educational tale of a tribe that refused to bend the knee. And even if some mechanics can add bumpiness to an otherwise smooth combat system, fans of beat-’em-ups, challenge, and Roman history should definitely consider raging against these Romans.